First off I'm not doing any April Fool's jokes. It's my actual Crypto News - I would have maybe done one if I was posting early in the day but it's about 10pm here at the moment so I think too late for April Fools.

Decentralized exchanges seem to be all the rage at the moment. With so much FUD about regulations worldwide, it's not hard to understand why they're so popular. One that hasn't launched yet but is participating in an ICO is Alttex. This could be an excellent investment opportunity. I personally bought Binance and Huobi tokens very early on (these are exchanges too for those that don't know) and both have been among my best investments in crypto. Here's a look at their homepage: 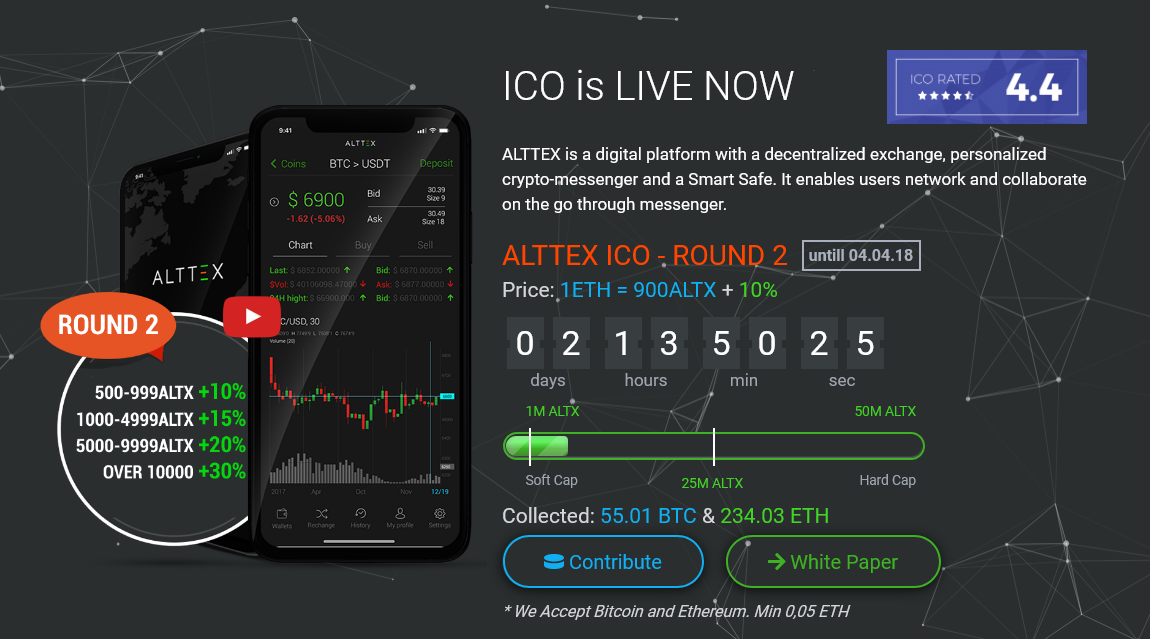 Genesis Vision has launched the alpha version of their trading platform. If you don't know, an alpha is a demo run even earlier than the beta version of a program/app. I think this is an excellent idea to find problems before everyone's money is in. I know some of the community want the final product out now but I think we have to respect the care the team are putting in and their transparency. The alpha of the platform looks like this:

This next bit isn't really news so much but it is some important information for people who haven't been in the crypto space for long and generating so much FUD.

There's a really short video which illustrates my point even better:

P.S. I am not saying go and invest in Alttex without doing your own research. These are my views but I do not offer investment advice. In general crypto is not considered a safe investment yet so please only invest wisely people.

Very interesting im going to look into this! As always great research.

Cheers mate hope your having a good Easter?
I'm in mid to long term on GVT and Alttex but I'm expecting another difficult month or two in crypto so I wouldn't like to influence anyone too much...

This post has received a 0.63 % upvote from @drotto thanks to: @tomsweet.

Resteem your Posts to 7200+ Followers — just send 0.05 SBD or STEEM to @yougotresteemed with link in memo (you also got a chance of receive a random upvote)!

For daily bloggers we offer a Resteem subscription including at least one Resteem a day and a daily feature + the chance of daily upvotes!

For more infos read our Vision & Rules and also get you your free Resteem!

Congratulation you also got a random upvote by @yougotresteemed! Tom i have tried the following:

Resteemable: no luck, transaction to pay them not going through

Yougotresteemed: results were not very good, made .02 on the post 0.01 was from me.

I was looking at smartresteemer I think they have a bot that upvotes you. Any tips.
The 20008 recession will repeat post.

It's tricky I'm literally writing a list right now! Some are awful. The ones on my list are going to be ones that make profit. Yougotresteemed got taken off my old list earlier it's rubbish value. Isn't resteemable the free one? When your on your blog replace https:// with re then when it loads DON'T (unless you want to) give a donation but you don't always get resteemed. You do always get upvoted though. Also, I prefer to pay with steem not SBD.
drotto at 0.001 SBD is good value
tipu at 0.1 SBD is a good one
authors.league 0.1 upwards of steem seems good so far (actually the upvote is worth 0.07 so not great)
You got any good ones?

Here is some research from one individual who payed out 16.25 sbd 4 hours ago to appreciator and 0.73 sbd to smart market

Nice one - I appreciate that information mate. Very interesting. I've used smartsteem/smartmarket before. It never lets me put full amount on though but otherwise good. Appreciator is new to me but looks good. So far I've only had low value ones be good value. When I've sent a few steem results have been poor. I think a lot of people don't wan't to share ones of actual value because there's only so much voting power they have...
Sound pal

Hey buddy let me know if you want to discuss more of this offline.
We can go into more detail and figure this thing out.

If im gonna spend I want to makeback my investment .

Yeah exactly there's more scam ones than decent ones.
I always have discord on whilst on steemit - I can add you as a friend on there if you use it?
Or do you want to email?

Lets do the email buddy im on the road or at work most of the day so email is convevient.

I have a video to share with you so send me your email, I will send you the link and let me know what you think.

Sent you an email mate