moments is what you remember, either good bad or ugly and you feel to share.
It's a weekly contest.
It will be done every Wednesday.

All You need do is place an entry of your best moments.

This could be in the following forms
✔️ photo caption
✔️ original video
✔️writing etc.

Price
Winner gets 3sbd price after the post payment. Hey @jasladin, best of luck on the contest!! I like your content so hope it goes well!

Thanks so much for this.
I'm honored.

This unforgetable, riding in a passenger
motorcycle in a narrow and slippery road. 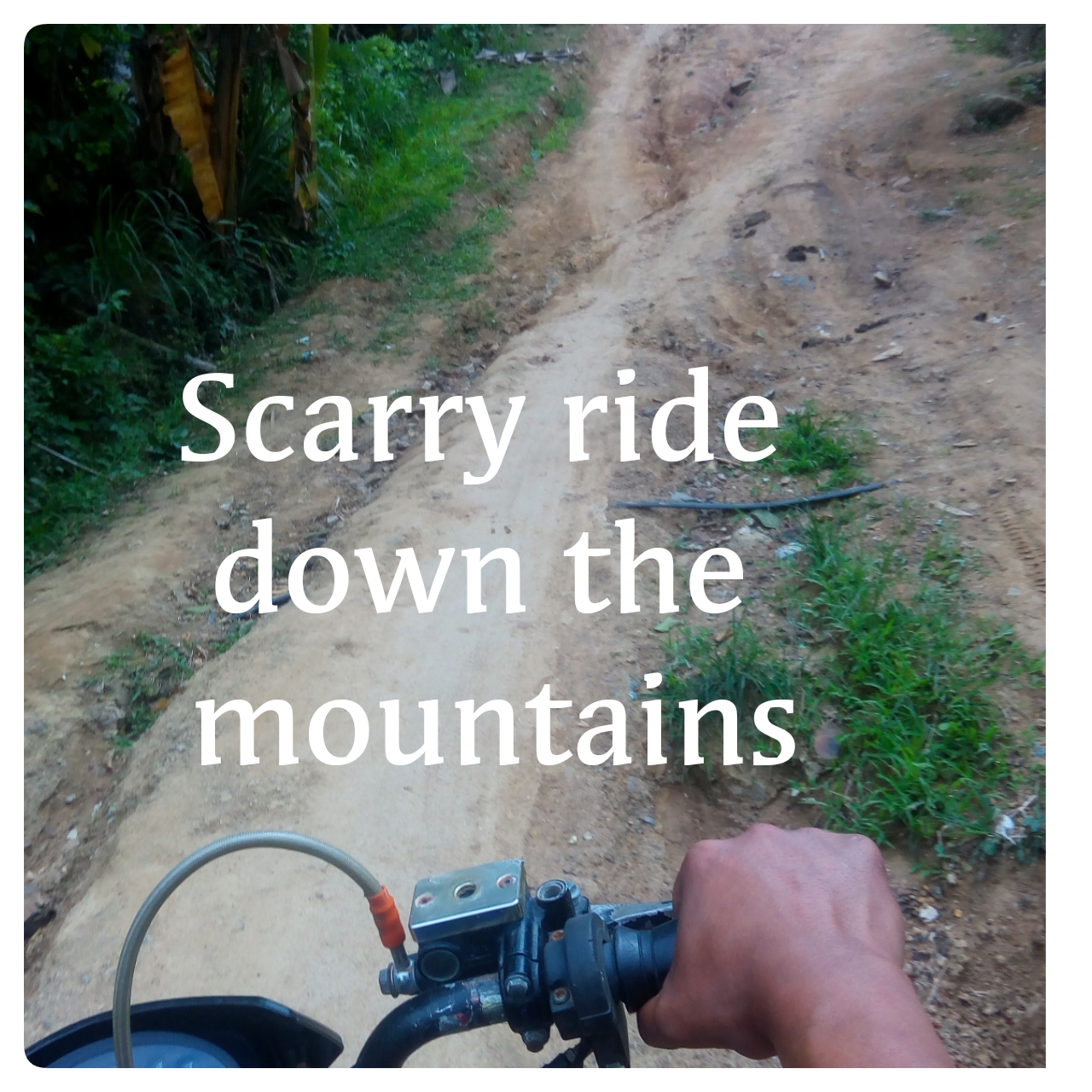 So this is my first steemit contest. My moment is on August 21, back in 20017. I was working outside under the total solar eclipse. Using a welding mask as a filter I was able to take this photo with my phone. That was only after I made a pin hole projector with things I had in the work truck. You know old box, cardboard tube, some take out tinfoil and pink duct tape 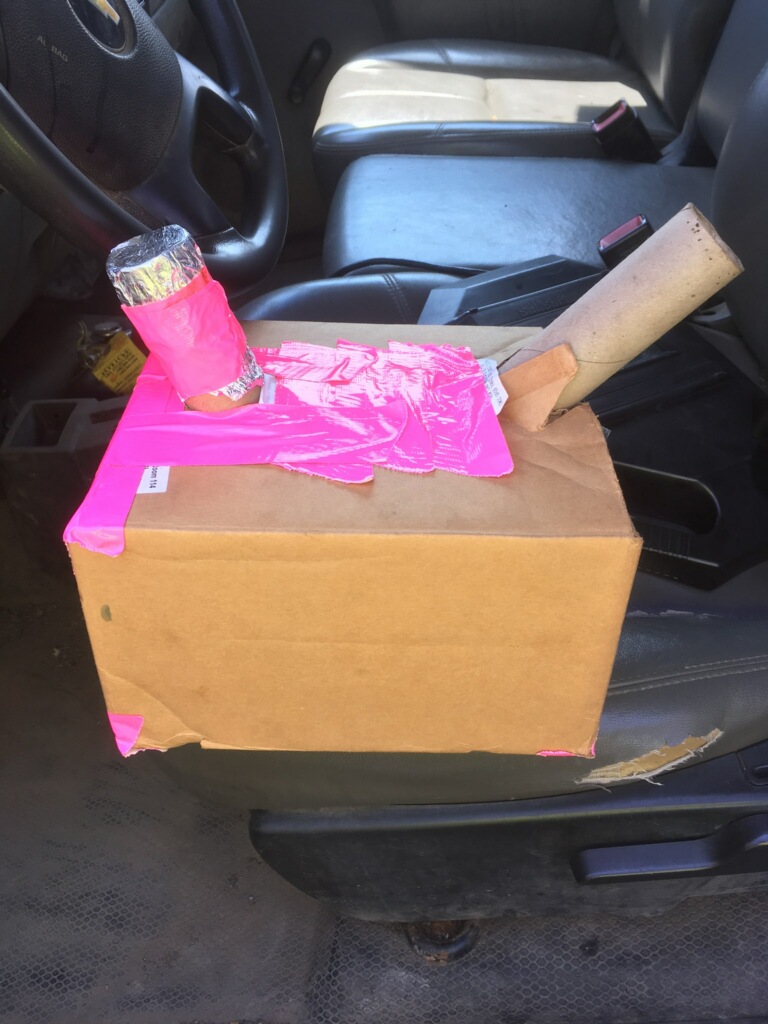 This post has been accepted.
Good luck to you.
I love the caption

This is the photo from the box. I could not line up the pin hole, the viewing port and my phone camera. Lol Congratulations @jasladin, this post is the sixth most rewarded post (based on pending payouts) in the last 12 hours written by a Newbie account holder (accounts that hold between 0.01 and 0.1 Mega Vests). The total number of posts by newbie account holders during this period was 5334 and the total pending payments to posts in this category was $3617.89. To see the full list of highest paid posts across all accounts categories, click here.

Thanks.
I have check it out.
Great analysis

On returning to my home in Puerto Ordaz after a long trip to the Margarita Island, when I spent the Bridge Agosturita 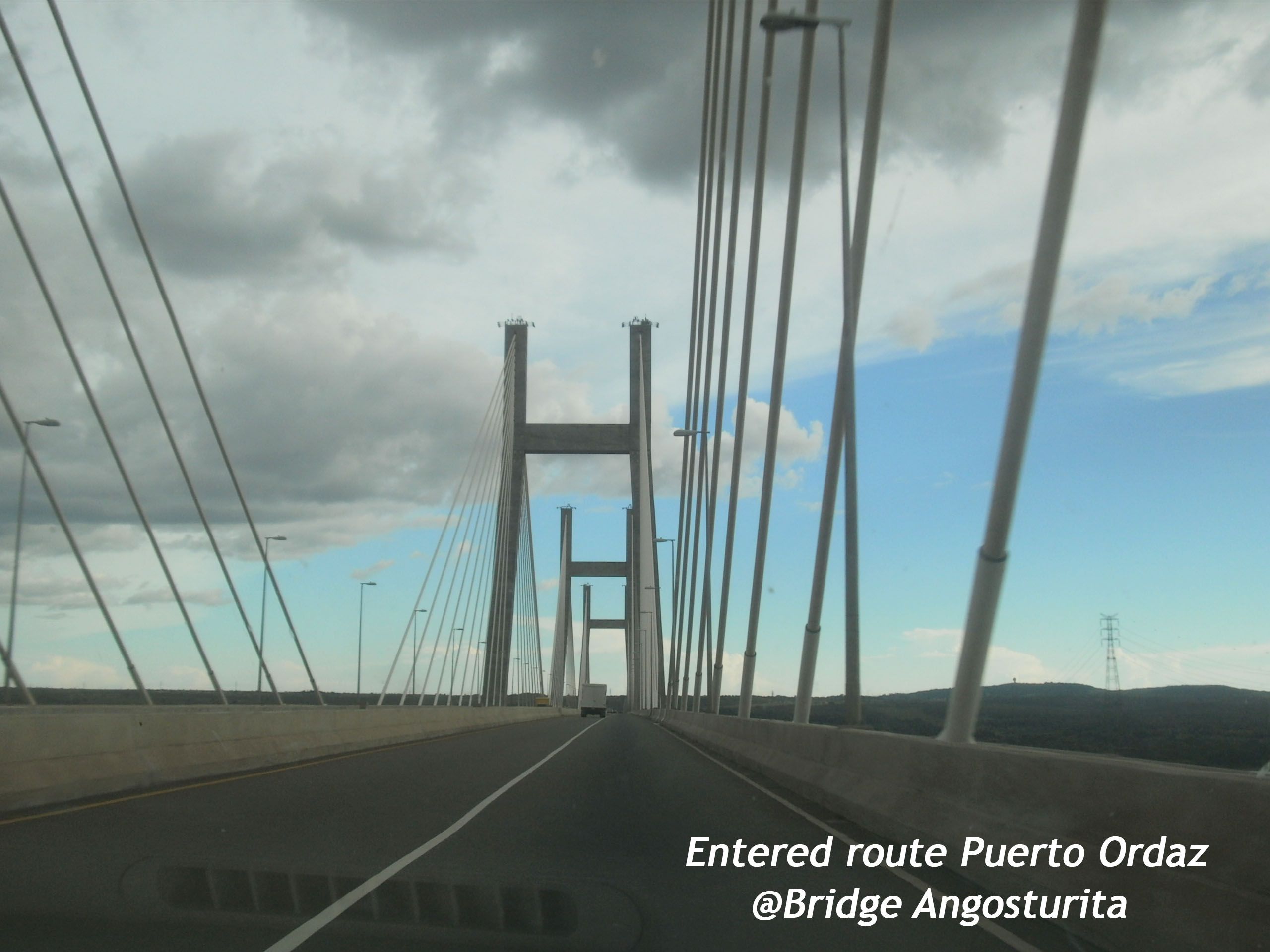 What an emotion! To go for this one bridge is meant of " home, sweet home! " This entry has been received.
Good luck dear

After a couple of trips to the ER and dealing with health issues my daughter sent me this for Valentines day. She knows I love avocados.

It was especially meaningful since this was my first Valentine’s Day without my husband since his death four months ago. I’m usually not the sentimental type but I sleep with it every night as a reminder that I am loved. 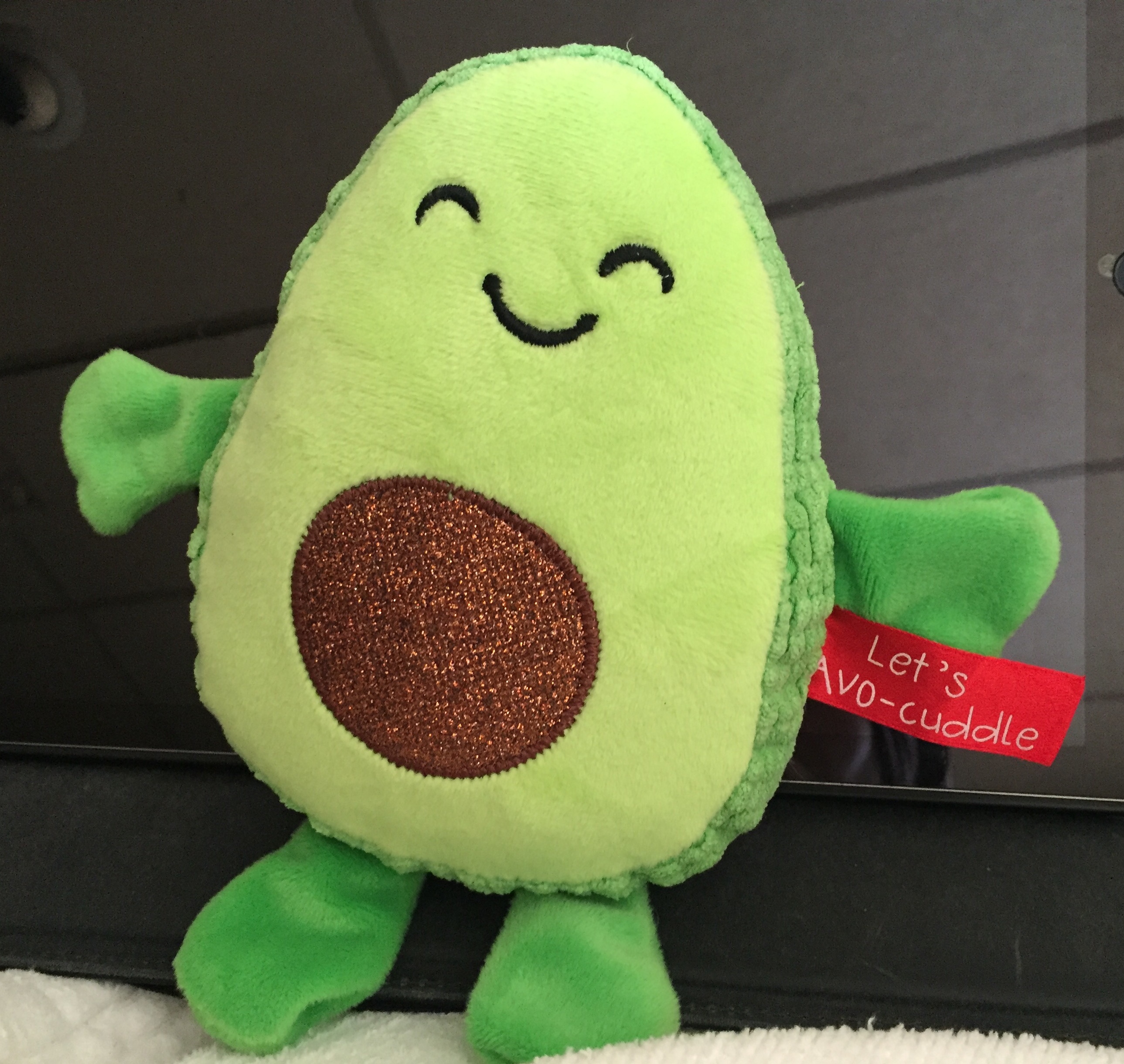 This got me emotional.
My condolence to you.

Pls follow the rules.
So this beautiful entry will be received.

My funniest moment that I would like to share is a story told by my friend. Every Friday afternoon, a group of us tell each other true funnies stories. This story starts off with a fire alarm going off. My friend, let's call him Bob, heard the fire alarm and smelled smoke. He quickly exited the office through the back door where there was a stair well for the fire escape. As he descended down the stairs, he saw his coworker struggling to climb down. He asked if she needed help, but before she could reply, he picked her up and cradled her like a baby, his cheek to her cheek with one hand wrapped around the back of her head. He carried her down three flights of the stairs protecting her like a precious baby and then released her down outside of the building. She gave him a look of dismay and they never talked again that after that incident. Weeks would go by without a word or even eye contact. She eventually changed jobs and that was the last Bob ever saw of his coworker.

It has been one year since Bob told that story, and every time we have an office fire drill, we run to Bob and say, "Carry me down the stairs my hero."

This is funny.
This post has been accepted.
Good luck

We all have funny moments while in high school, well I have mine to share back in my senior secondary school days.

I am an ex-commando and I graduated from command Day Secondary School Jos, Plateau State, Nigeria (Set of 2013).
During our time I.e from my SS1 to SS2 we had a bursar(one who was in charge of all school finance and fee driving) by the name captain Akinyemi, he was known as a friendly man outside the school but a harsh man when it comes to fees payment.
We are normally given 2weeks after resumption by him whenever we resume for the section to pay up all dues before driving begins. It's not just the driving that was the problem, but the flogging that was also involved. There was this course mate of mine by the name Mohammed Garba who was known for his late payment of the school fees, but then he came up with this tactics of whenever the bursar comes to our class for the fee drive when ever his name was called among the defaulters he would say before anyone else that he was not around and then the whole class would obliged with him. That was how he did and was never caught by the bursa... 😂 😂 😂
Funny dude right? Well I don't have any pictures to support this but I have a comment on his recent post on Facebook as a proof of this memory..
👇👇👇 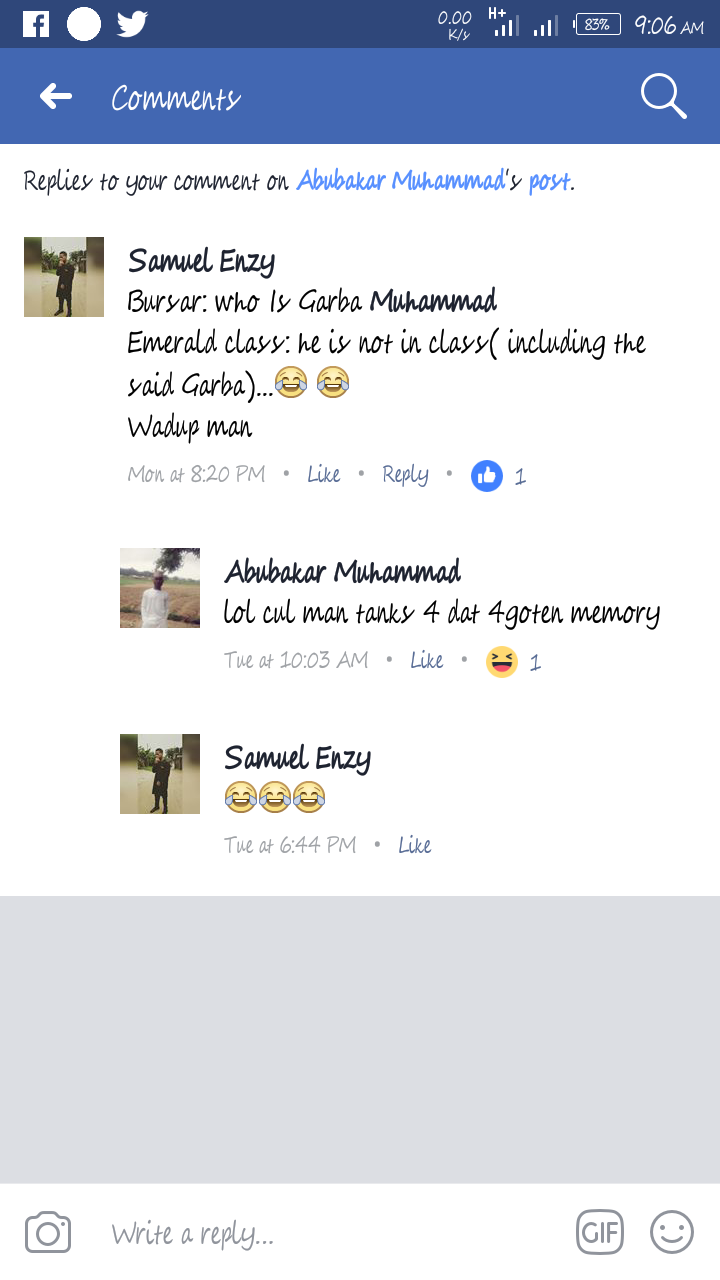 This entry has been accepted.
Good luck sweetie.