doitvoluntarily (77)in #conspiracy • 4 years ago

They want you to feel like opulence can be yours, that you can excessively indulge for only $1. And they've got at least 20 new decadent items they're putting on the dollar menu and they're inviting those interested to come and join their Belluminati taco society.
new commercial below if you haven't seen it yet.

The new approach has taken to incorporating the illuminati pyramid into their signature logo to inspire some new merchandise and help market the campaign. They are now selling Belluminati hats, t-shirts, pins, patches, candles, and hoodies. Limited quantities were made available and it looks like they've been selling out fast.

While some find the new campaign to be hilariously clever, others view it as downright disturbing.

Those working at Taco Bell are looking to change the way that people view the dollar value menu but they're going about it in a strange way—or are they? Illuminati has become quite the buzzword these days, with a number of celebrities and businesses looking to link themselves to the secret society and the imagery frequently associated with it.

After investigating customer perceptions about the value menu, Taco Bell reps found that many people viewed the menu as less-than-appealing. They assumed that perhaps the food wasn't going to be filling enough or not an exciting product because of the cheap value associated with it. Here they saw a chance to employ a marketing tactic to try and change things and that resulted in their Belluminati campaign. Rather than looking at the value menu as something with only cheap, and low-quality items, they want people to feel like they can endure a feast for only $1.

The marketing company behind the campaign was Deutsch and they're headquarters are in New York City.

The new campaign is clearly a detailed effort to tap into the subject matter of the online conspiracy crowd and who knows whether it's going to work out yet in their favor. They've already upset quite a few folks with the new commercial and a great deal have vowed that they will be boycotting the restaurant now because of the illuminati-theme to their new marketing strategy.

Despite many being angry over the Illuminati-theme, it's been seen as quite the achievement to join or acquire the merchandise etc, in the eyes of others. Some have said that it's the best commercial that they've seen in awhile. 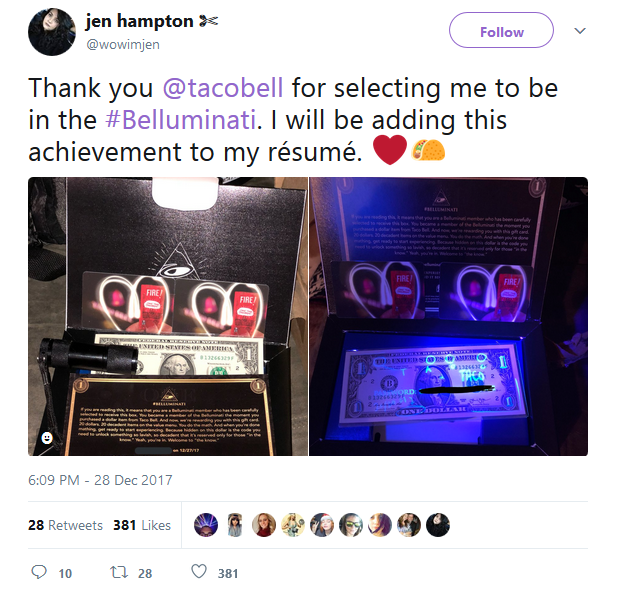 If the goal was to get people talking, they certainly achieved that. But if they're looking for a boost in sales, we'll have to see how it unfolds for them and if people really do stick to their taco boycott plans. It's clear that for many people this subject isn't a joke to them and certainly not something to be made fun of for the sake of promoting taco sales.

The new items that they are planning to introduce will be items like a Mini Shredded Chicken Quesadilla, Spicy Tostada, $1 Stacker, and Beefy Fritos Burrito.

Parents Too Embarrassed To Bring Their Kids To McDonald's

Government Beef WILL KILL YOU! (just clearing my conscientious, I do this often).. It is corporate beef handled according to government regulations (aka Government Beef). Check out the China Study.

Government beef is disgusting. We purchase all our beef from a local farm. Free range cattle with no antibiotics. I don't think I could eat grocery store beef anymore. Tastes like a wet dog lol

I have a very interesting idea and I'm not a developer but think you might be interested in developing this or at least advising. It's good for humanity 😁

It is pretty disgusting the standards implemented in the agricultural industry when it comes to meat and dairy. The China Study, along with other science-backed studies are slowly coming out into plain sight and more people are becoming aware of this. On another note, for the video, it is interesting with the use of symbolism. The term "Illuminati" is really just a term for "being illuminated" or "enlightened." Perhaps they are "illuminated" to how bad the quality of the product has become?

Very weird in my eyes... And disturbing.

Well It is all about conditioning. The Big Bang Theory also shows their sign in the intro. Familiarity encourages acceptance. In time it is not a shock. Think of how numb folks are to certain horrific crimes that once they would have all been in arms about. I would bet the Taco Hell is in bed with the illuminati. Folks know that the Illuminati is real...quite real. They came into existence in 1776 but had their roots in the world long before that. Ye It would bother me too as they are only Satanic and doing the Devils bidding. I would encourage folks to educate themselves on the subject and not be intimidated by those who wish to fluff it off. It is not something to joke about. Thanks for bringing this to our attention @doitvoluntarily. PS: As for it being a smart move it got your attention did it not? They say any publicity is good publicity. I will reserve my thoughts on that but smart does not mean morally right.

An entertaining commercial. I would be indifferent to it as a customer of Taco Bell though..if anything it might just remind me they exist.

Sadly,this is really disturbing and strange too....I really hope they are right with the decisions they have made now at the long run.

Strange indeed. Also disturbing. But not surprising. This post has been deemed resteem & upvote worthy by your friendly @eastcoaststeem ran by @chelsea88 (not a bot)

There's some serious irony here as some people have pointed out that Taco Bell has satanic/illuminati symbolism in their advertising.

I think when considering messaging in advertising, whether overt or covert we must take NOTE of the timing and socio-political and cultural atmosphere at the time of its appearance.

At the height of the pizzagate investigation/uproar they ran this commercial during the Super Bowl for Avacados.

Depending on your disposition you would either think this is 'brilliant' or 'gaslighting'.

We should ask ourselves, why is this commercial appearing now?

I do not consider this a smart move. Dollar food is smart. The rest is selling out. As long as the populace lets selling out trend, it will. I never understood what a taco chain served to gain from isolating a population? So much for Taco Bell runs with the youth group. Geez. Good article. I like your angle on these blogs. Intriguing. Following. Blessings. Only food from Taco Hell that I will eat.

Cool post. The disgusting nature of fast food aside, we are seeing Illuminati and satanic symbolism/themes popping up more and more blantantly in the mass media. The public is being prepared the accept what was once deemed unacceptable. Since it gets folks talking we'll probably continue to see similar marketing techniques.

If anyone thinks that somehow you can make any of these items for $1, pay for advertising, employees, electricity, insurance, rent, sanitation, equipment, transportation etc etc. and still meet a franchise and corporate margin - and use ANY semblance of what you would call an edible product - you are out of your mind. The 'meat' is slaughterhouse slime, mixed with edible plastics and drugs/seasonings to make the brain think it is appetizing. Made from animal slaves, fed to human slaves. Thats a funny commercial, we can't even get taco bell here in Europe, so you guys in the states sure are a part of a privileged elite... So don't connect the dots and leave your tinfoil-hat at home and enjoy that 1 dollar taco!!! =)

They might as well be apart of the illuminati. They have people in my town hooked on their food, including myself. I feel like the fast food industry has us all chained in a cell. Shoving processed cancerous meat down our throats. Pure evil in my opinon.

We have taught you some great techniques through your post. I think strategies are very important for me and important for me. I have a great post for me. For me, I could not learn more from you. If you adopt these strategies in a lot of work, it will be possible to put life in front of everyone I appreciate your efforts is really remarkable experience, your knowledge