Is it a Ghost or Chemistry Process ? 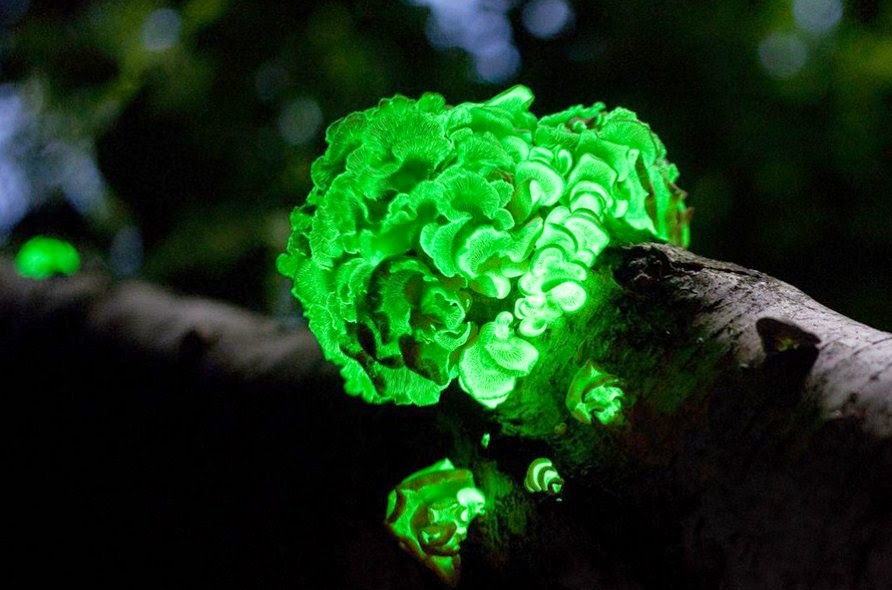 Several days ago i post about Fireflies (Luciferin + O2 → Oxyluciferin + Light), and now i begin to write an article base on chemistry science.
When i was child, in my village at 1990 people said that luminescence mushroom is a ghost, or indicates where the fungus is growing means that there are ghost's nest, this fungus is found in many trees that have been cutting. So, After learning science then we got the knowledge to argue that luminescence is not a ghost but just a chemical process occurs on the fungus. Luminescent mushrooms or also called The Glowing Mushroom. Why is it considered a unique mushroom? Yes because the genus fungi Neonothopanus or Mycena this in the day will look like mushrooms in general, but when night comes and dark mushroom is able to issue a very beautiful and beautiful light. The Luminescent mushroom was first discovered in the region of Vila de Natividade, Brazil. This one fungus has Bioluminescence, or the ability of an organism that can produce its own light just as it does with jellyfish or fireflies. But organisms such as mushrooms, bacteria, insects or fish make their light through chemical processes.

Why it be Light Up

Researchers on this unique fungus believe that the light produced from the fungus uses the same method or method as fireflies, through a chemical mixture of two luciferin or luciferase compounds. Luciferase is an enzyme that helps interactions between luciferin, water and oxygen then it will produce new compounds that able to emit light. Bioluminescence is done by this fungus is a fungus strategy to attract insects so as to spread the spores to be able for multiply.

The release of photon light from the luminol molecule is a complicated process stage. In the basic solution (base), luminol is present in equilibrium with the anion, which is charged -2. Anions can exist in two forms (or tautomers), with two negative charges delocalized on oxygens (enol form) or on nitrogens (ketol form; see image below).

The molecular oxygen (O2) is combined with the enol form of the luminol anion, oxidizing to cyclic peroxide. The required oxygen is produced in a redox reaction (ie one in which oxidation and oxidation occurs) involving hydrogen peroxide (H2O2), potassium hydroxide and (for example) potassium hexanoanoferrate (III) K3[Fe(CN)6, also known as potassium Ferricyanide). The hexacyanoferrate (III) ion Fe3CN18 is reduced to hexacyanoferrate (II) ions Fe[CN] 6)4-, giving potassium ferrocyanide, K4(Fe[CN]6, Two oxygen atoms of hydrogen peroxide are oxidized from the oxidation.

We can see at the cyclic of peroxide decomposes to produce 3-aminopthalate acid in an excited state, together with a nitrogen molecule (N2). This decomposition reaction is preferred because the cyclic peroxide molecule is highly unstable, and its reaction involves breaking down some weak bonds. It is also preferred because of the increase in entropy (abnormalities) due to the liberation of gas molecules. When excited 3-aminofthalate descends to the ground state, a blue light photon is released. 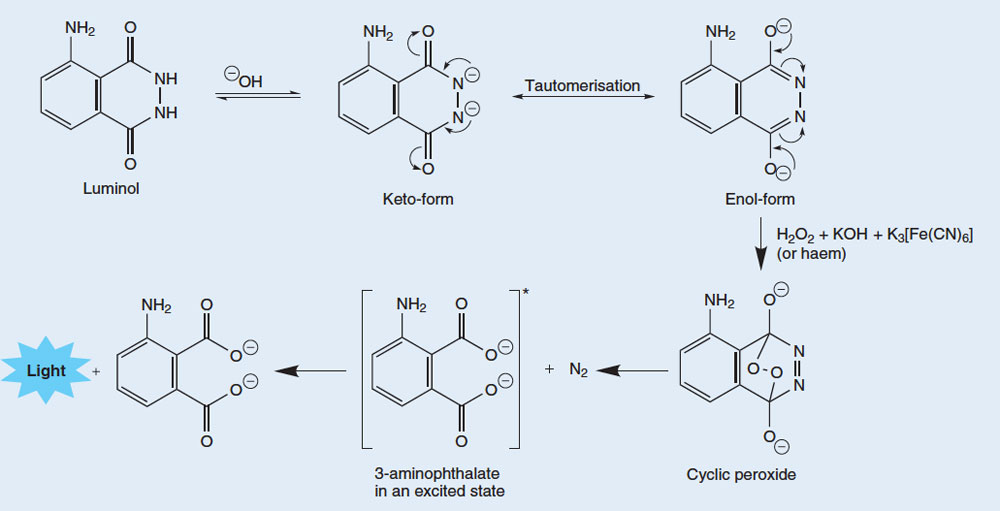 Leading reaction to the emission of light from luminol
Tautomers are molecules with the same molecular formula, but different arrangements of atoms or bonds. The two tautomers can be interconverted; the curly arrows show the movement of electrons that brings about the change between the two forms.

The luminescence that people considers that the tree where this mushroom grows as a haunted tree, that is no true, but it is a chemical process, This is the benefit of science, Precisely when you see it you should feel proud, because you can see the beauty of nature that was previously unknown.

Just because its bioluminescent does not mean that it is not haunted.

People who can see apparitions tend to describe a completely different kind of glowing. Those who can't see, see something glowing and equate the two.
In the future there will be a device to see, then all can see and know.

The people of my village said, haunted place, but that is when i was child, thanks for reading Thanks @mystifact for coming my blog, nice to see you here

Great reading! Always nice to see work of a collegue