caitlinjohnstone (71)in #censorship • 4 years ago (edited) 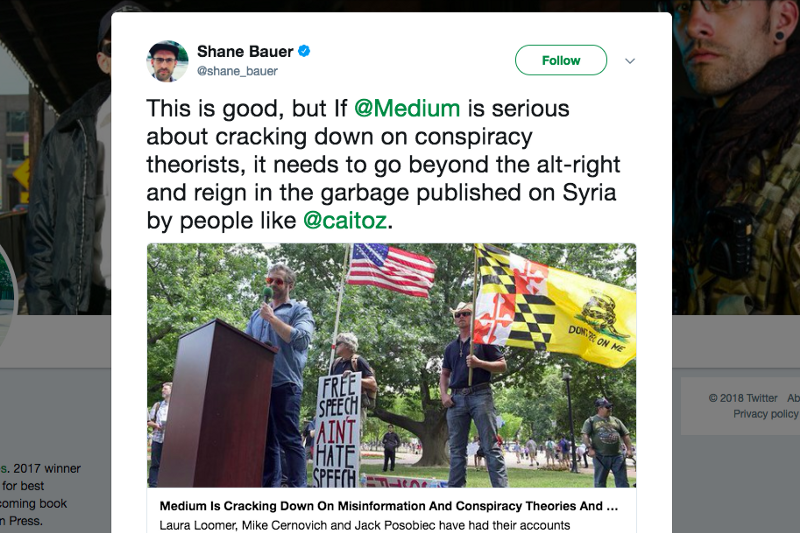 When news first broke that Medium, one of my primary blogging platforms, had closed the accounts of Trump-supporting pundits Mike Cernovich, Jack Posobiec and Laura Loomer, I tweeted the following in response:

"The only people cheering for this are leftists who haven't been paying attention and centrists who have. This ongoing trend of marginalizing online dissent is already impacting the far left, and will do so more and more. The #MAGA crowd are the canaries in the coal mine, lefties."

Hours later, right on cue, prominent Mother Jones Senior Reporter Shane Bauer was singing the praises of Medium's recent account suspensions, and tagged Medium's Twitter account saying they need to take it further and include left-wing writers like myself due to my repeated criticisms of the pro-regime change Syria narrative.

"This is good," Bauer tweeted, "but If @Medium is serious about cracking down on conspiracy theorists, it needs to go beyond the alt-right and reign in the garbage published on Syria by people like @caitoz." See how quickly that happened? Bauer wasn't the first to call on Medium to silence leftist writers like me for our skepticism of an empire with an extensive history of using lies, false flags and propaganda to manufacture support for regime change interventionism against noncompliant nations, and he will not be the last. They get you okay with silencing offensive right-wing voices (who contrary to Bauer's claim are in this case not even "alt-right" by anyone's standards, including the Anti-Defamation League), then they target the true left, who present the biggest threat to the US oligarchs.

Empire loyalists like Bauer will continue demanding that Medium delete writers like me who unapologetically promote skepticism of establishment narratives involving longtime imperialist targets like Russia and Syria, and they may well succeed, which will set me back a bit since I've spent nearly a year building up an audience there.

But that's the least of our problems. Support for this broader trend of dissenting leftist voices being aggressively silenced has permitted Google algorithm changes to slash the viewership of leftist outlets like World Socialist Web Site, CounterPunch, and Alternet, as well as essential nonpartisan anti-establishment outlets like WikiLeaks, Consortiumnews, and Truthout. I myself have had my account suspended by Facebook for posting an article about known false flag operations around the world, and by Twitter for attacking the Democratic party and the establishment Russia narrative. In a corporatist system of government, where corporate power is not separated in any meaningful way from government power, corporate censorship is government censorship. The new empire doesn't silence dissent using government censorship, it simply refuses them camera time on the plutocrat-owned corporate media and silences the rest via social media corporations. As recently noted by WikiLeaks editor-in-chief Julian Assange, Medium's CEO is also the co-founder of Twitter.

Medium has been good to me thus far and I have never had any issues with censorship there at all, unless you count a moderator once asking me to please stop cursing at people who accuse me of being a Kremlin agent. That will not stop empire loyalists from loudly demanding my removal, and if it happens you can be certain I'll use the Streisand effect to draw more attention to my work than ever. As I've said, my leftist haters are out of ammo and my centrist and right-wing haters only help me, so the only remaining attacks available are the ones which will uplift me.

This broader trend which we are undeniably seeing is extremely pernicious, however, and it should concern us all. The plutocracy which is driving our species toward extinction is far more afraid of the left than they are of the right, which is why they've poured unfathomable amounts of resources into sabotaging leftist and civil rights groups with psyops and infiltrations.

Again: the only people celebrating the censorship of conservatives are leftists who haven't been paying attention, and centrists like Shane Bauer who have been. Censorship is not our friend, my lefty brothers and sisters. Never has been, never will be.

I figured they'd go after you next.

Wow! I'm really glad I'm following you. Normally, I keep track of the goings-on of the right. Now I know that the Dissident Left is facing similar pressure.

It sure helps to wander off the reservation, that's for sure.

I'm glad you joined Steemit. You'll face nothing of the sort here.

It's really sad to see Shane Bauer become this kind of shill for establishment propaganda. With every story Democracy Now did about what he went through in Iranian prison, making him sound like a peace-loving, free thinking journalist, one has to wonder what the hell happened. To love democracy is to be willing to fight for the voices of people you don't agree with. On principle. Based on what I'm hearing from him, sounds like he would have advocated silencing I.F. Stone. On the bright side, I think your impact is increasing. They are losing control of the narrative and you've genuinely helped wrest it from their hands.

Democracy Now is a limited hangout. They do some good work, but they only put that out to trick you into putting trust in them. The reality is that they lie by omission just like all of the corporate media, the only difference being that they cover some material really well and that can earn them undue trust. Be mindful of the trust you place in organizations and whether they really deserve that much trust.

You're absolutely right. It's always a good idea to with-hold trust in any media organization. In the last year or two, I started to notice a shift in how DN was covering the news, especially around Syria. It was disheartening but sent me on a hunt for more and better media sources. Cheers.

Thank you, Caitlin, for your hard work and courage. You will never know most of the people who learn from your example.

There is a political realignment going on. Been happening for some time. The naive Left and the crazy Right are being cleaved off the edges of our body politic. The neo marriage of neocon and neoliberal is creating a lockstep, authoritarian corporate centrist party.

This Just Came Down From Corporate:

Back in 2012, I predicted the Republicans would run populist as a result of Democratic fealty to their corporate sponsors (ACA, GS Econ Cabinet, All of the above Oil Policy, no comfy shoes for Madison, WI, etc). I saw a coalition coming on of corporate centrists: Orrin Hatch and Howard Dean, Olympia Snowe & Biden, and (I must confess, though, I didn't go this far) Hillary and Kissinger or Hillary & Kagen. /shudder

So 2016 happened, and this is truth. We have a completely new political realignment. Neocons and neoliberals are lockstep, kicking out the paleocons, peaceniks, and socialists who have some sort of problem with Perpetual War, Inc.

We are left with a single party in the center comprised of Joe Scarborough and Hillary Clinton. John McCain & Keith Olbermann. It is a nascent and tenuous alliance, but they are completely operating with the same facts and huck similar values.

Democrats are attacking Drumpf from the Right on economics and foreign policy.

The authoritarianism coming from the political Establishment at this moment is palpable. And the neocon and neoliberal marriage with spy agency support is terrifying to contemplate.

Who is going to stop Joe McCarthy? Certainly nobody from the corporate center.

And this is exactly why we are grateful for Steemit and the blockchain technology! You wanna win the media war?Advertise this platform as much as possible!

Not only are these people who are lying to further war, mentally ill, but they are also co-conspirators to murder. They are conspiring to commit murder. If there is ever justice in this world, not only will the politicians go to jail, but these 'journalists' as well.

This is absolutely disgusting, but definitely not surprising. It was disgusting when conservatives were being silenced, it wasn't difficult to see this coming from a mile away.

It's also another reason platforms like Steemit are so important right now. Because independent journalism has never been so critical to maintaining what sliver we have left of our freedom.

why are all the Jewish journalist trying to push us into war. Shane Bauer is Jewish right?