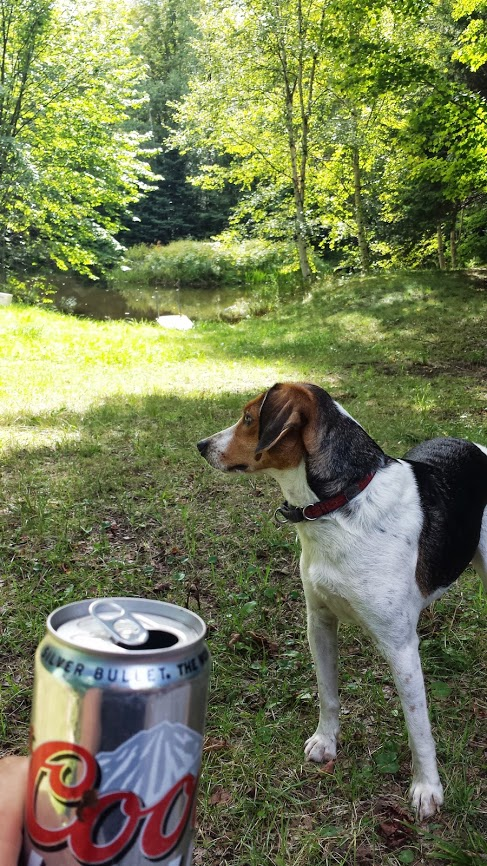 (Blue, when we first got him.)

I have always been a dog person. Ever since I was old enough to remember, I just loved dogs.

Even when I didn't have a dog, I would go to the SPCA and walk the big, old dogs that didn't get walked very often.

Cats were okay, but I just didn't bond with cats. (Whit when I first got him.)

Until Whit came along.

I found him in my landlord's driveway when I went over to pay the rent. He had a big barn full of dairy cows and mangy looking cats, but Whit was just in the driveway playing with a leaf. When I got close he prmmmfed and started following me. He would rub up against my legs and generally made a nuisance of himself. Definitely didn't look like a scraggly barn cat. I knocked on the door.

As I opened the door, he scooted in quite verbally, and Alain shouted and told me to grab him and get him out of the house. I apologized and put the cat outside. He was in great shape. I told him I thought it must be his house cat and he said that someone had dropped him off a couple of weeks ago. He said that he was probably going to have to shoot him because he was beating up the barn cats and always trying to come in the house.

I felt a bit sick about it, but it was his farm to manage. I just walked home and Whit walked with me most of the way. I thought about how winter was coming and I imagined the mice that would be in that old farmhouse as soon as it got cold. (We were in northern Ontario; it was going to get very cold.)

The next day I asked Alain if he thought that cat would be a good mouser. He said, "Ahh you don't want dat cat. He is a mean fighting bastard." I'm sure there were a few "Tabarnak" thrown in as well, but I'm just playing the odds there. I told him I didn't care if he fought other cats, as long as he could catch mice. He said he probably could, so off we went to get his nuts lopped off.

Maybe "lopped" isn't a good choice of words, but it's better than "sheared" or "ground".

After that, he was the best cat I had ever met. I guess it was because he acted like a dog. When I came home from work, he was at the door to greet me. If he was out hunting he would sprint to the house to beat me to the door. If I went for a walk, he trotted along behind me, but if it was too hot he would have to stop for rests to pant heavily. I would usually end up picking him up and carrying him part of the way home.

And I never saw a mouse in the house, or a cat in the yard. One time he popped out a window to fight a cat that he could see in his yard. He ended up coming home and getting an abscess in his back. After an examination, there was a claw presented as the culprit. He was tough, he did his job, and he was the sweetest cat at the same time.

When I came back out west to lick my wounds, I left Whit at the farm. He was cherished there and had free range; I was going to be living in a work camp, so really not a hard choice for me. I hope he's still alive and well, but I wouldn't be surprised to find out he lost in a fight with a wolf or something.

I didn't think I would ever meet another cat that I liked until I met Kenny Rogers. He looked like Whit and was most agreeable when I would visit my sister. Unfortunately, I don't have any pics of us together, but believe me when I say that they would have been fantastic.

Fast forward to late 2016, probably November. My beautiful wife and I had been talking about getting a cat and when an ad showed up in the local PSAs offering cats for free we decided to go for it. They were not just free, they came with a litterbox, litter, scoop, food and if you took the two together you got a free cat condo. Oh, did I mention that the neuters were also paid for?

We didn't have room for two, but said we would come over and get one. When we got there, my wife decided to pick one up and it was clinging to her and snuggling into her neck. I was holding the other one and she looked at me and asked how to choose which one to take.

I told her to hold each of them and see which one she bonded with better so we switched. Then she decided to hold them both and see.

I was looking over at the mother when I heard a strange sound. I looked over and she was cuddling both kittens with tears streaming down her face. She turned to the owner.

"Would it be crazy to take them both?"

My eyes bugged out a bit, but I could see how much she was loving those kittens.

He was saying that it wasn't crazy at all and how much they loved each other, and I didn't hear the rest. I was too busy melting at the site of the person I love the most in the world, finding the purest form of happiness.

So they came home with us. 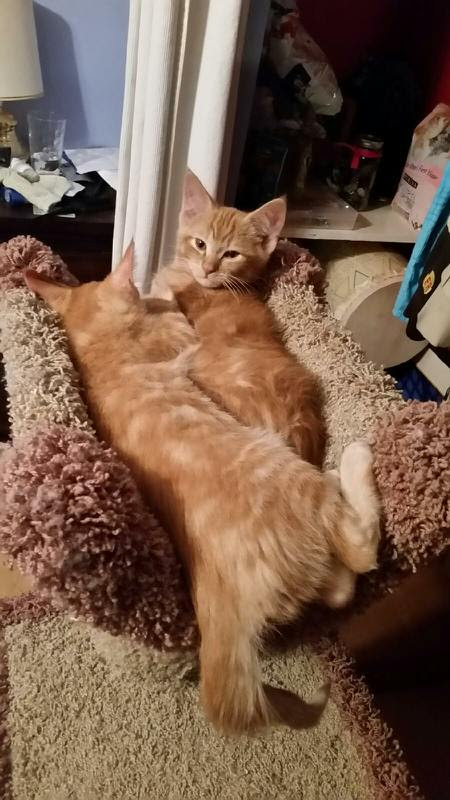 (just after their arrival)

They are just as cool as Whit and Kenny Rogers, and they have gone through a bunch of names in a year. It started out with Lighty and Darky, because it was the only way to tell them apart. Then we thought that it seemed inappropriate to name them that, so they were briefly; Harry and Voldy; Kenny Rogers II and Willie Nelson; and finally, once they got their final forms: So I should probably explain the title of this post.

Last night Skins was being weird and then started throwing up. We thought he must have eaten something bad, so we put some towels in a laundry basket and put him in our room to sleep. He started crying and walking around sluggishly and I was afraid he had been poisoned. He hadn't drank or eaten, so we opened a can of tuna and put some oil and the tuna water in a bowl. He drank it right up, but wouldn't eat any tuna.

Ten minutes later he barfed it all up again. We were really getting worried, but we are over an hour to the nearest vet and it was after ten at night. We made a plan to call in the morning when they opened and see if we could get an appointment. Around midnight I woke up and checked his bed. He was gone. We looked all over for him and found him laying in the covered litter box. He looked to be in a lot of discomfort and there was a trail of blood going into the litter box.

We decided that he wanted to be there, so we left the lid off. I woke up around two and checked on him, but he was no better. A while later my wife checked and he had gone to the top of the litter box and was hiding in there. Then it was time for me to go to work.

The vet opened at 8 AM and by 8:30 my wife, Skins and the kids were all on their way to town. By lunch, they had operated on the urinary tract blockage and he was recovering. I finished work and went home to read up on urinary tracts of male cats and worry about just about everything to do with the cats.

He is going to be in the hospital for a few days, but he is okay. That's the main thing. So what if I have to work a couple of extra weeks to pay the vet bill? It's only money, and we would be spending that much on meth trying to ease the hurt of not having Skins in our lives. 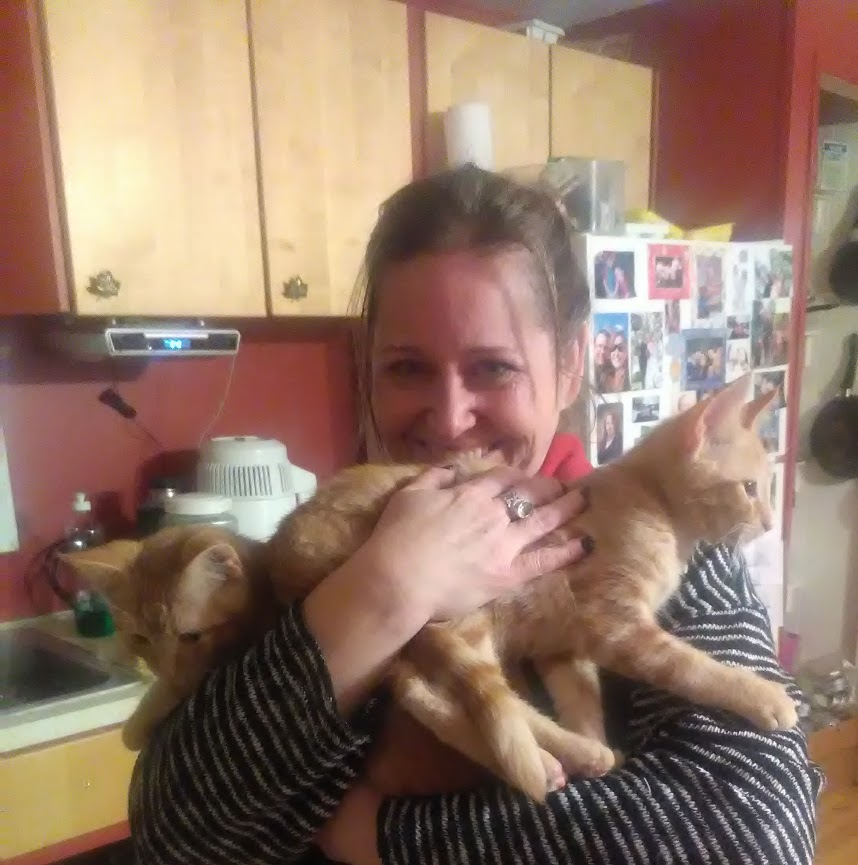 (This photo is worth any vet bill to me.)

When I told a coworker that the cat was sick and I was up all night, he seemed shocked that anyone would care about a cat that much. I said that the cats were a shining light in some pretty dark times for my wife and he actually said, "Oh, so that's why you couldn't take it out and shoot it."

Don't get me wrong, I'm still a dog person, but I'm a cat person too.

Oh shit, I forgot to explain the title.

After they got home from the vets, I found the tuna that we had drained the night before and made a few of these. 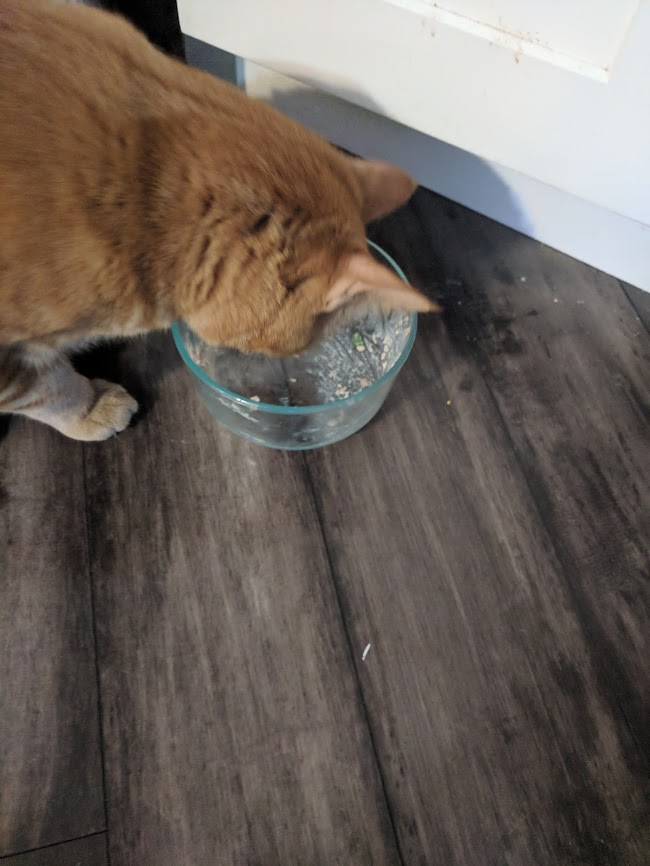 He's been crying for his brother all night, so I figured a treat wouldn't hurt him.

Submit
$1.23
10 votes
7
Authors get paid when people like you upvote their post.If you enjoyed what you read here, create your account today and start earning FREE STEEM!
Sort Order:
[-]
earthnation-bot (57)  ·  2 years ago

Congratulations! This post has been upvoted from the communal account, @minnowsupport, by Chris Bird from the Minnow Support Project. It's a witness project run by aggroed, ausbitbank, teamsteem, theprophet0, someguy123, neoxian, followbtcnews, and netuoso. The goal is to help Steemit grow by supporting Minnows. Please find us at the Peace, Abundance, and Liberty Network (PALnet) Discord Channel. It's a completely public and open space to all members of the Steemit community who voluntarily choose to be there.

Cats are now Britain's favourite pet: there are 7.7 million cats as opposed to 6.6 million dogs.

Congratulations @profanereviews! You have completed some achievement on Steemit and have been rewarded with new badge(s) :

The first cat in space was a French cat named Felicette (a.k.a. “Astrocat”) In 1963, France blasted the cat into outer space. Electrodes implanted in her brains sent neurological signals back to Earth. She survived the trip.