Apheresis - What your body wastes can save someones life

Ever heard of this word ? I also did not hear about it until I went through it.So let me share you some facts about Apheresis and my experience.

Apheresis is the process in which platelets are extracted out of blood, from the donor, and all the remaining components are returned back to the Donor. So its a bit different than normal blood donation in the sense that, you only give your platelets which have a life span of maximum a week, after which they are destroyed by your body. So what gets destroyed can save someone's life. You can certainly find a lot of details on this in internet.

So far it sounds simple, isn't it ? But the practical aspect of this is not that simple. So let's explore the experience.

My Uncle has been suffering from Dengue and is being treated in a critical condition in ICU ( Intensive Care Unit). When a person suffers from Dengue, the platelet counts decrease continuously. Platelets do an very important job of stopping bleeding ( or blood clot) in our body. The platelet count for a normal human is usually between 150000 to 450000. And in my uncle's case it reduced to 10000, which made everyone panic, because when the platelet count goes this low , it can cause heavy internal bleeding resulting to organ damage or death. So the doctor advised us to go ahead with platelet transfusion. The immediate eyes were on our family members, but the doctor advised to get external donors from the same blood group (A++).

So we started calling our Friends, and asked them for their help, one of my friend advised to contact a group of young people who donate blood at any time through their whatsapp site. And we dropped a message to the group and reached SUM Hospital, Bhubaneswar, where we have the facility to extract the platelet out of blood by Apheresis. On inquiring we were told that, before a person goes through this process, he has to go through several tests (to make sure, his blood is safe), which would take couple of hours. And then the process (Apheresis) itself takes 1 - 1.5 hrs. So keeping the possibility of some donors getting rejected, we were advised to keep multiple donors and let them go through the tests, after informing them about the process ( In my opinion, this was the hardest part).

Quickly we got calls from the donors, and we advised them to reach the hospital ASAP. Within 30 minutes we got around six donors at the Hospital premises. And we thanked them a lot for such quick help, and started explaining the process. And what happened after that was a disaster : All of them feared and said, they have never given blood in such a long process, and instead would donate, only if its a regular blood donation.

So all the hopes were grounded to zero in that situation, and we became desperate again. Thanks to God, in next 20 minutes one person arrived, and upon inquiring he said he knows the process and will donate. All formalities were completed in next 2 hours and he was at the facility giving his platelets. The machine is so advanced that, it shows when the blood is drawn from your body or returned to your body. 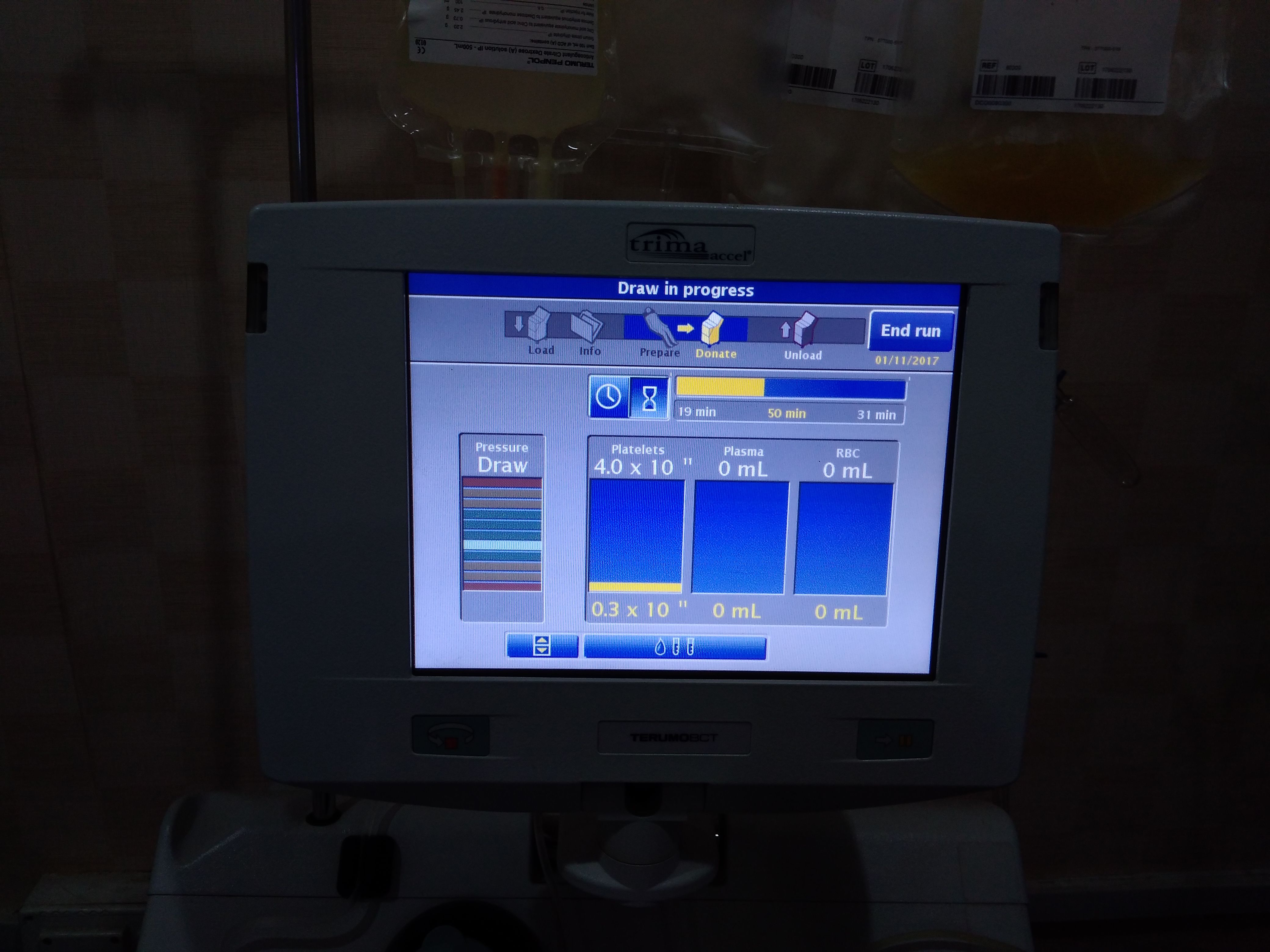 I was aside him and my curiosity could not stop me asking him, how he feels. And he said, when the blood is being returned to the body, he feels some kind of pain. But he will be able to manage. The process took around 50 minutes, and then the platelets were rushed to the hospital where my uncle is.

With such scarcity of willing donors, I asked the hospital staffs about the problems that may arise if family members donate. They confirmed that it is better to get some donor outside of family, however, with no other option, family members can also donate the blood, but it has to go through an extra process ( called Eradication), in which the molecules from same gene will be destroyed ( too complex for me to understand that time). So with no delay, I asked them to go ahead and test my blood, so that if it passes the tests, I would donate next day.

And as expected my blood passed all the tests, and next day, I was there to give my platelets at the facility. While doing so, I tried to ask as much as possible to the doctor to understand the process. And believe me, I did not feel any pain during the process, only except some tingling effect in the mouth. So I asked the doctor why the person previous day talked about pain, and the answer was , its simply some nervousness inside, and nothing else. And the tingling effect in the mouth is because of Citrate , which is used as the primary anticoagulant which has something to do with the calcium ions during the process. 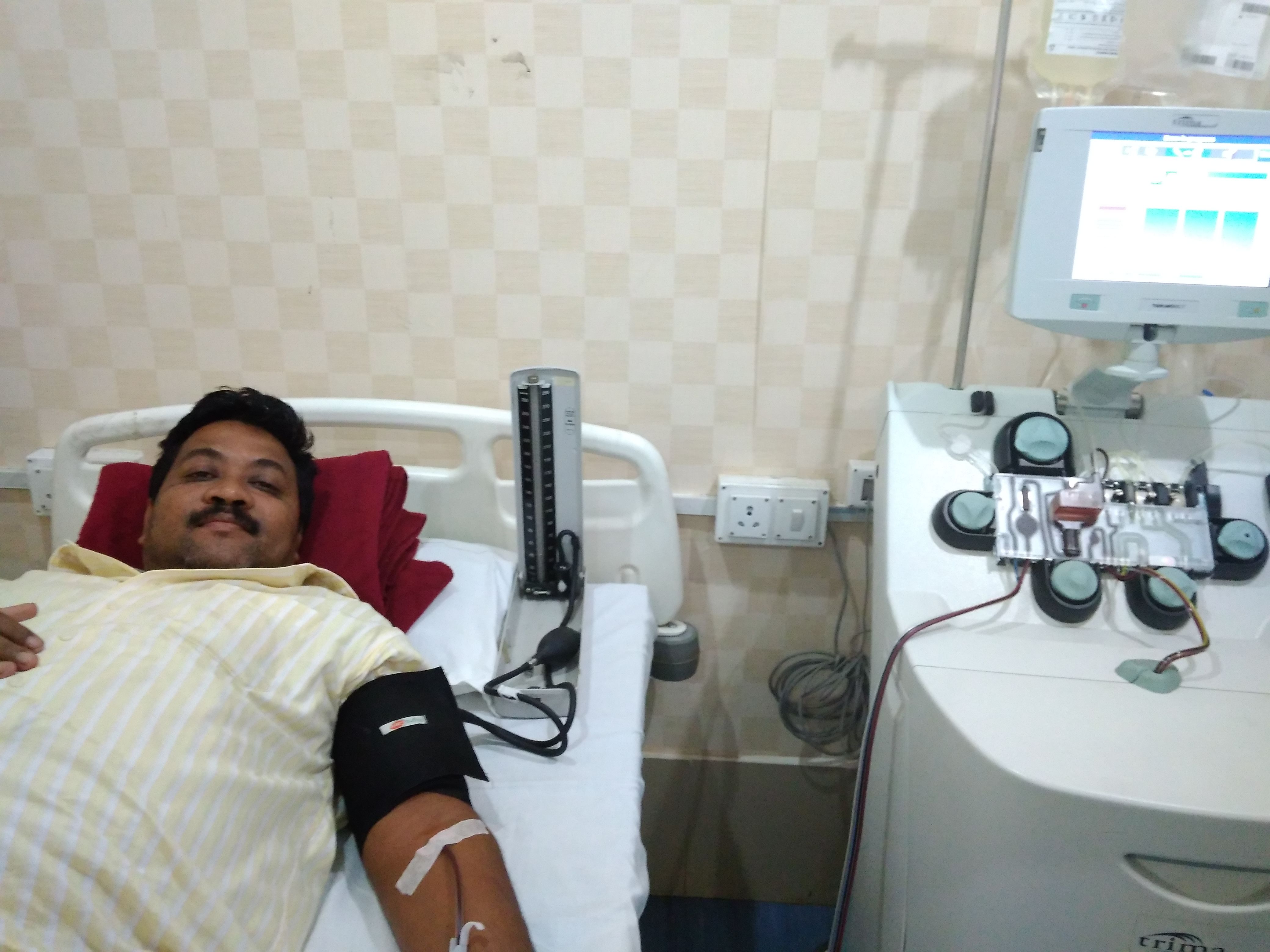 So everything well went, and I myself drove the car to take my own platelets to the other hospital, to be given to my uncle.

You can certainly find lot of information on the process in the internet, however, as part of this post I wanted to convey you that, the process is painless and all you need is understanding and patience ( to sleep for a hour during the process), and there is nothing to be nervous about it.

What your body destroys in a natural cycle , can save someone's life, Its just a matter of you being educated. I have decided to start a whatsapp group of donors only for this and educate them.

Hope it gives some education to my steemit friends. Let me know, if you have any questions.

All the images were taken using my cell phone.

Great Job, and a what a living example to educate people.

Congratulations! This post has been upvoted from the communal account, @minnowsupport, by sanmi from the Minnow Support Project. It's a witness project run by aggroed, ausbitbank, teamsteem, theprophet0, someguy123, neoxian, followbtcnews/crimsonclad, and netuoso. The goal is to help Steemit grow by supporting Minnows and creating a social network. Please find us in the Peace, Abundance, and Liberty Network (PALnet) Discord Channel. It's a completely public and open space to all members of the Steemit community who voluntarily choose to be there.

I hope your uncle will be okay! This is a great post, really fascinating and a little stomach-turning for someone like myself who does not enjoy giving blood, but as you say it can save someone's life! I hope this article inspires some readers to donate platelets. Happy to have found you and following you for more interesting reads! Cheers - Carl

Thank you a lot for noticing, and rewarding. I must urge everyone to give blood, it helps you a lot as your body produces fresh blood.

Like a factory, then our bodies also produce waste that must be discarded not to be toxic.
Food extracts are taken throughout the body by the blood to be processed where it is needed. The waste of the process is then carried by the blood again for removal. Some are brought to the kidneys and expelled through urine.
In order for the waste management process to run smoothly then the blood work in the body must flow evenly throughout the body, not to have a rigid body part not teraliri blood, once again the sport is the key.

Congratulations @sanjeevm, this post is the third most rewarded post (based on pending payouts) in the last 12 hours written by a User account holder (accounts that hold between 0.1 and 1.0 Mega Vests). The total number of posts by User account holders during this period was 2452 and the total pending payments to posts in this category was $2419.28. To see the full list of highest paid posts across all accounts categories, click here.

Nice post ...i upvoted u ..now can you upvote for me

Followed and upvoted u

This post has received a 4.98 % upvote from @buildawhale thanks to: @ranjangjang. Send at least 1 SBD to @buildawhale with a post link in the memo field for a portion of the next vote.

Congratulations @sanjeevm! You have completed some achievement on Steemit and have been rewarded with new badge(s) :

Congratulations @sanjeevm! You have completed some achievement on Steemit and have been rewarded with new badge(s) :