TUTORIAL How to deposit steem to the Bitshares dex without fees

I've tried to make this tutorial really step-by-step so newcomers to the bitshares world would be able to understand everything about getting steem on the Bitshares DEX. 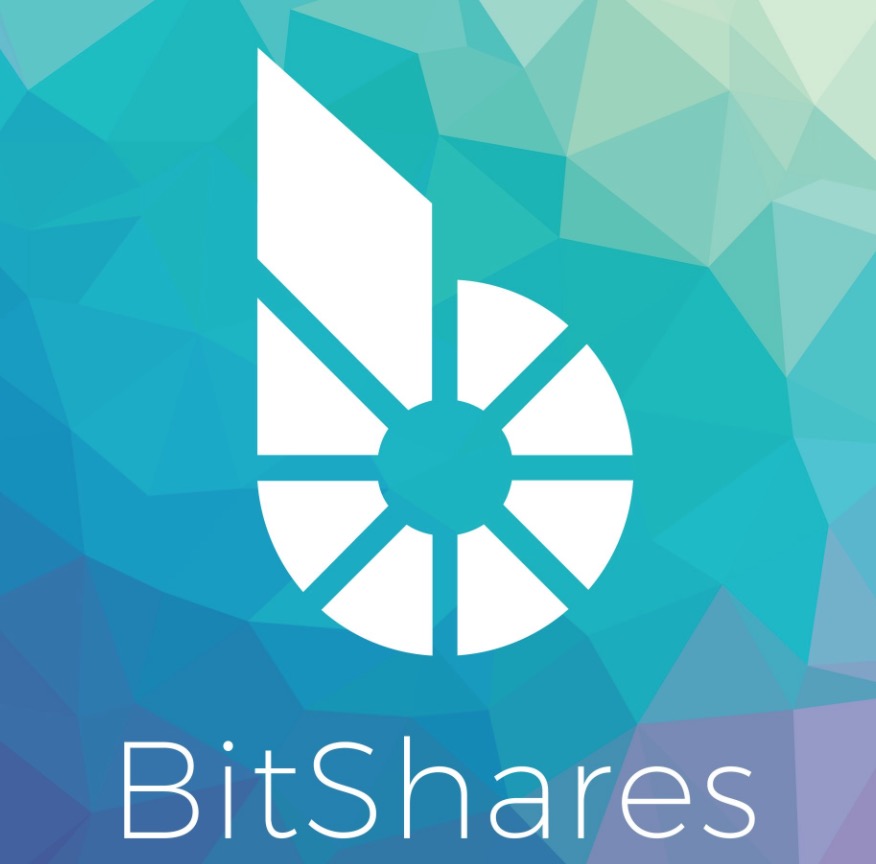 If you already know the bts dex well, then you probably won’t even need this tutorial at all, but will be happy to know that there’s a steem gateway with rudex.

BITSHARES GATEWAYS
For a long time now the openledger gateway on bitshares has been closed for steem. It’s a pity because Bitshares is my favourite exchange along with a lot of other people here on steemit.

Someone asked the owner of Openledger directly about it and he answered that it’s because the code for the steemit wallet keeps changing.

I don’t know whether that’s true or not, but the fact is that we couldn’t use it for months now.

So after talking to @skreza, I decided to explain it in simple terms for people who want to deposit steem onto bitshares without paying the fees for using blocktrades.

So most people have been using blocktrades to get their steem onto the bitshares platform.
The problem with that is, that there are fees and that it’s a bridge and not a gateway. That means you can only trade steem through blocktrades to other tokens and not deposit it and keep your steem.

But a while ago Rudex opened up a new gateway to deposit steem to the bitshares DEX.

Rudex is a trading platform similar to Cryptobridge and Openledger meaning that it's built completely on top of bitshares, which is great.

So log in to wallet.bitshares.org, that’s important because the rudex gateway isn’t showing on other platforms like openledger. In the top right corner, choose 'deposit' in the dropdown menu. 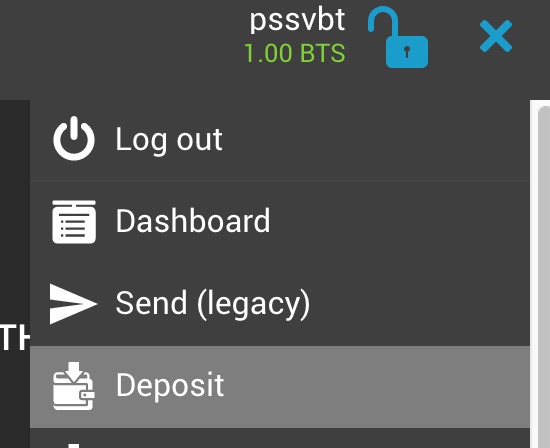 Then choose the Rudex gateway and select steem from the dropdown menu. Then you will see the instructions about how to deposit. If you have steemit open in another tab, then go to your steem wallet.
From your steemit account you send minimum 1 steem to rudex and the memo has to be dex:bitsharesusername as you can see in the screenshot. 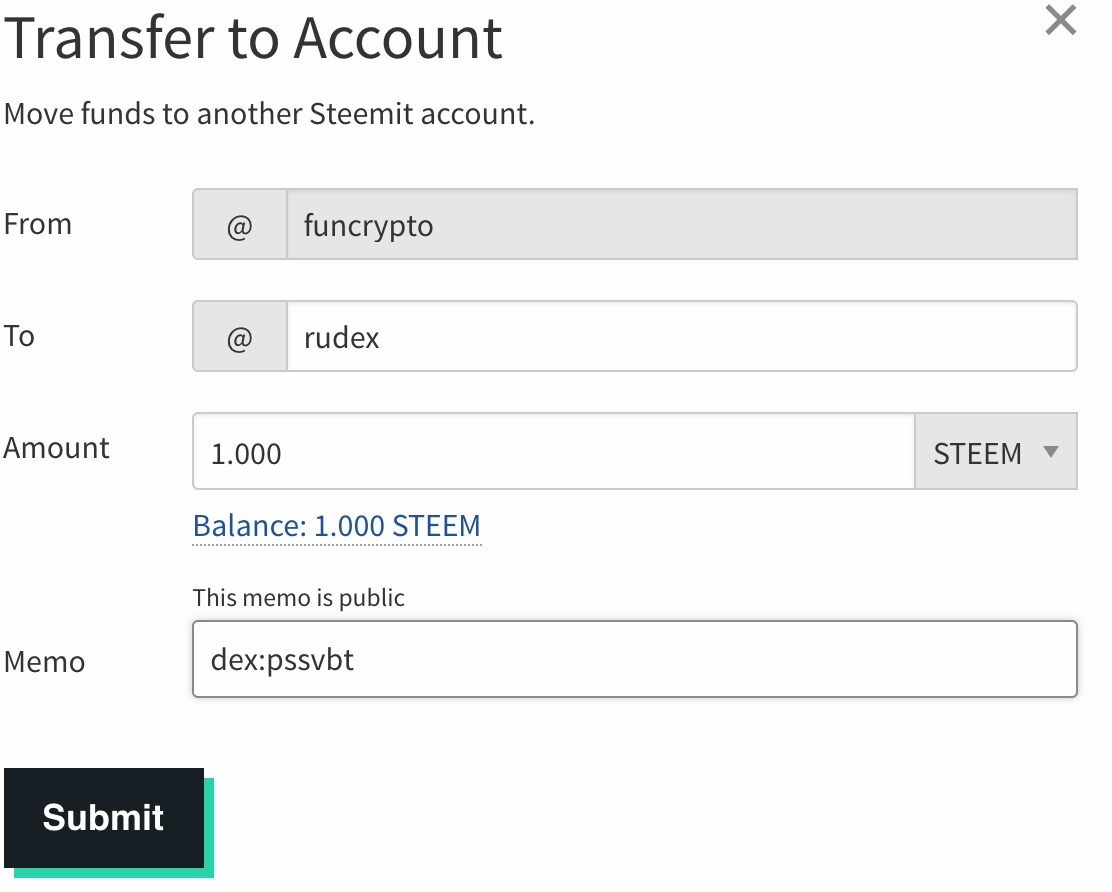 Then after some seconds it will show up on your bitshares account as rudex.steem. As you can see the full steem is there, so nothing was deducted.

Then you can click the trade icon which takes you to the bts/rudex.steem market.

When I made this screen shot, you could sell the 1 rudex.steem instantly for a bit more than 16bts, and at the same time through blocktrades you would get around 14bts, so you get more than 10% extra this way. So that's how you deposit steem to the bitshares DEX without fees and have the possibility to sell it at a good rate if you want.

WITHDRAW STEEM
If you want to withdraw rudex.steem then you go to the deposit window again and click on withdrawal. You should also select rudex.steem in the dropdown menu.

Then choose the amount and address (which is your steemit account name). 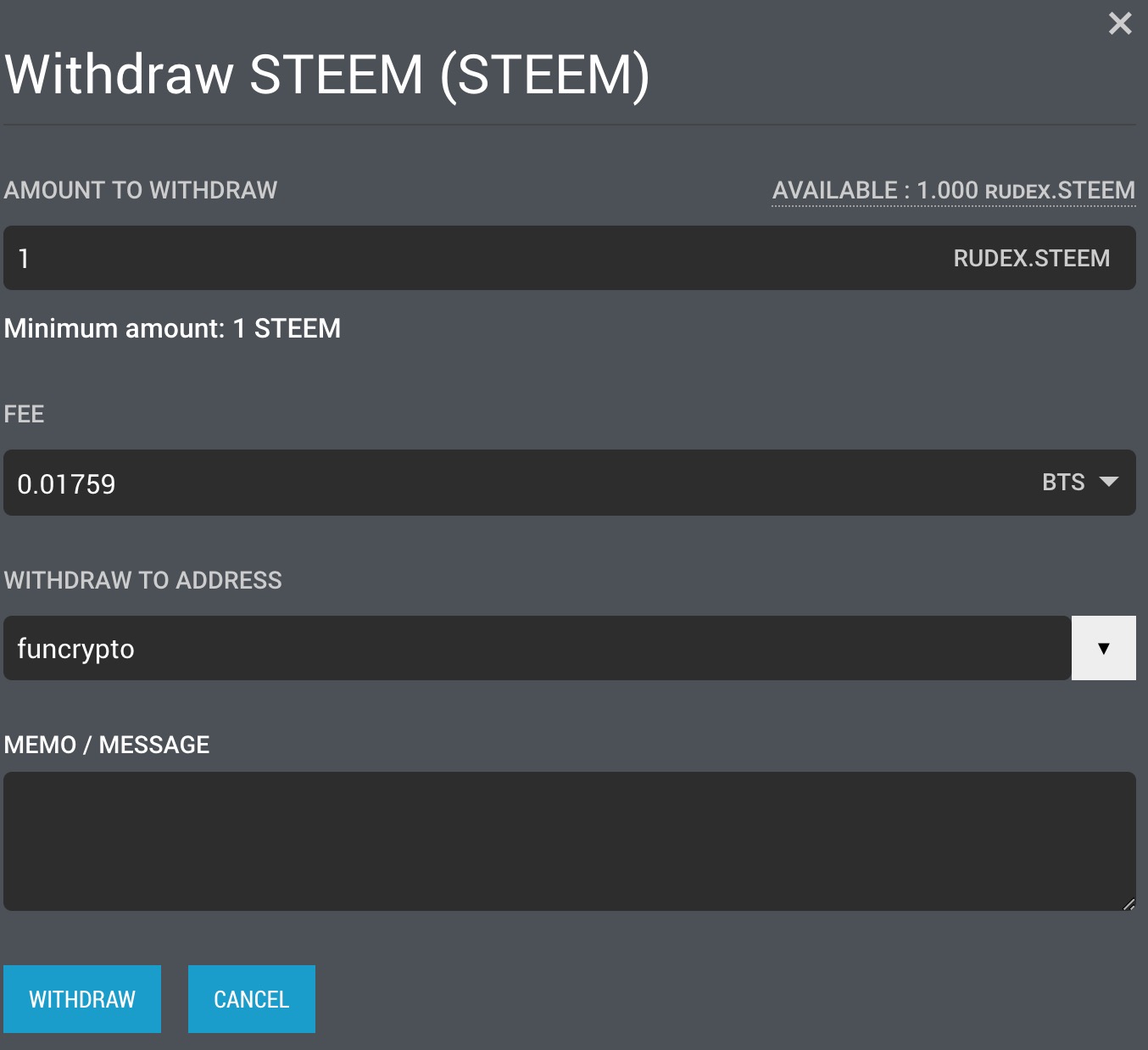 You can see there’s a small bts fee now (0.01759bts) this fee goes to the bitshares blockchain and not to Rudex and it’s still a lot less than the fee for using blocktrades.

With the current bts price it’s less than 0.004USD, so it’s really insignificant.
But it means that you need to have a little bit of bts on your account to do anything on the DEX as you will pay these small fees to the blockchain every time you trade, withdraw or do anything except receiving.

The BTS fees are so small, though, that's it's a joke to compare them to any centralized exchange, and that's why many of us prefer bitshares over pretty much anything.

So now I deposited 1 steem and got it back again.

I hope this tutorial was helpful, let me know if anything didn’t make sense.

Great job.. I will read it later.. I resteemed this and upvoted too.. but since my VP got low.. I used alternative way to vote this post..

BTW does it also work with SBD

Thanks! Yep, it's exactly the same, just use SBD instead.

I did further research.. looks like rudex is highly interested to capture the Russian market.. but anyway the fees make it awesome and much better than blocktrades.. however as you told me before the volume is really low.. but if marketing is done properly many people will use their service.. blocktrades is good but they charge killer fees.. I transferred some Steem into bit.USD and the market price at that time was $3.5 but I got $3.3 that's $0.20 and the worst thing is they charge for each coin.. if I transfer 20 Steem then they will charge 20 x 0.2 = 4. that's a lot.. just imagine when it's 100 or thousand Steem.. Anyway thanks for taking the time to make this post.. once Rudex gets mass acceptance, trading Steem would be fun and no one would bother for openledger and their so called wallet issue.. hope you like that gratitude 😉

That's amazing, thanks! It was good you convinced me to write it, I've been a bit low on steemit posting lately, so it's good to get back on track.

As far as I understand it, Rudex is really focused on the Russian steemit twin, Golos and since they had the gateways for that it was really easy for them to add steem.

But the funny thing is that openledger does support golos, but not steem... Doesn't make sense to me.

And I agree with you about the per coin fee vs, per transaction. That's what makes bitshares so amazing, you could exchange millions and still pay less than one cent in fees.

Thanks @skreza for the great tip! to have @funcrypto do a trial run!

This helps many people; and, takes a little 'pressure' off OpenLedger since it seems to be having probs with the currency of choice for Steemians.

You can now delegate SP / invest in @tipU for daily profit:) Click here to learn more :)

Thanks for this excellent post! Great job and deserving of a tip!

So nice of you, thanks a lot!

It's not my main account, it was just an extra one I had created by accident some time ago with one single bts on it. So I thought it was good for a fee-less test, hehe.

Gonna try this. Thanks for the heads up!

Thanks for the interesting tutorial. People are using blocktrades to get their steem.
Gonna share with them that Tutorial.
Resteemed!

This post has received gratitude of 2.45 % from @appreciator thanks to: @skreza.

You can now delegate SP / invest in @tipU for daily profit:) Click here to learn more :)

Well explained, thanks . What does DEX mean? Is there a difference between Bitshares and bitsharesDEX?

Congratulations @funcrypto! You have completed the following achievement on the Steem blockchain and have been rewarded with new badge(s) :

Does this method still work? Also, is it still fee free or at least less fees than Blocktrades?