RE: The Planned Collapse Of The Economy Has Begun

I admire people who try to learn more about crypto currencies and the blockchain technology. They love bitcoin not because of promises of quick money but they understand how it works and they know how it can change the world. It's a very interesting discussion. Please watch the whole video!😀

yes exaclty!
Some people think: it is escaping taxes, doing any criminal activity etc. But this is actually jumping on the "Noah's boat" to save ourselves.

Has anybody considered the possibility that it's the banks that built the boats before they caused it to start raining? Just saying that solutions usually appear before problems manifest. Coincidence?

Maybe Satoshi Nakamoto is Barrack Obama:o
But seriously, if Bitcoin was made by banks or some government, that would be quite the plot twist. Then they either they played themselves (at least short term) or maybe they created a seemingly anonymous system which they could use to get surveilance of illegal money transfers:o. Regardless, I'm kind of surprised that banks don't buy up massive amounts of crypto just in case. Or maybe they do...

I don't think they really care if the currency collapses or not, this plan has been going on for hundreds if not thousands of years. They already own and control most of the world's resources...just my thoughts

Exactly!
To draw your comparison even further: Noah has a couple of boats. He has one Litecoin-boat, one Bitcoin-boat, a Dash-boat and so on. You have to buy a ticket to get aboard, and you can even buy multiple tickets to bring more of your possessions on this boat and then the price of the tickets get higher and higher and more and more people want to go on the boat. And more and more people who have not yet bought a ticket, are starting to realize that the its raining, and maybe that it's raining a bit too much, but they don't like Noah's boats, so they try to make dollar boats, but in this comparison, the rain represents the dollar, so they are trying to make boats out of water. Also, sometimes Noahs boats get over-hyped in the media, so many people bring too many possessions on the boats and then the boats roll over every now and then and a lot of people fall in the ocean, but the boat is still floating.

your description of crypto currency is perfect .......... it may be our salvation when government currencies collapse ....how much more debt we can sell? we are close to a boiling point

Yes, it makes me feel much safer than the US economy right now!

So true. I am selling off stocks now to fund crypto purchases. I'm certain the few cryptos that survive this massive speculative wave will change the world, and I can't wait to be part of that.

There is just not enough crying yet. Lots of room for panic still.

Yea, I hear you. I expect many panics in the years ahead. I'm just trying to get into the market ahead of the institutional money. You should too. Once investment companies and trust funds move into this space, you can bet prices will zoom. Not necessarily in a good way, but maybe. I'd rather have some skin in the game now, where these things are overvalued and cheap, than later, when these things are overvalued and expensive. At least if I'm invested now, the tech can catch up to the hype. And then, hopefully in a few years when the winners and losers get shaken out, I'll be holding some winners.

I guess it's true what they say, that technology is always overestimated short term and underestimated long term.

I hear You! Salute

I concur!! Crypto will change life as we know it...much like in ancient times when we exchanged rocks for fish, or animal hides for logs! physical money really has caused so much destruction and misery compared to the way we once lived prior to this.
Have you ever asked yourself or others? what is the purpose of money? Money is merely a tool of exchange for goods or services. This can’t exist unless there are goods/food/clothing and essentials produced, and people being able to produce them.

I now have BRAINFREEZE thinking about this! 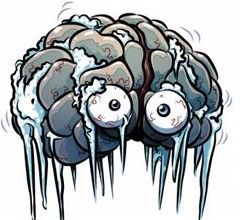 I guess it's very simple...money is a material object of the principle that, we as humans who wish to deal with one another, have to deal by trade, and give value for values sake?