A commissioned sculpture for the town of Colonial Beach Virginia (USA). 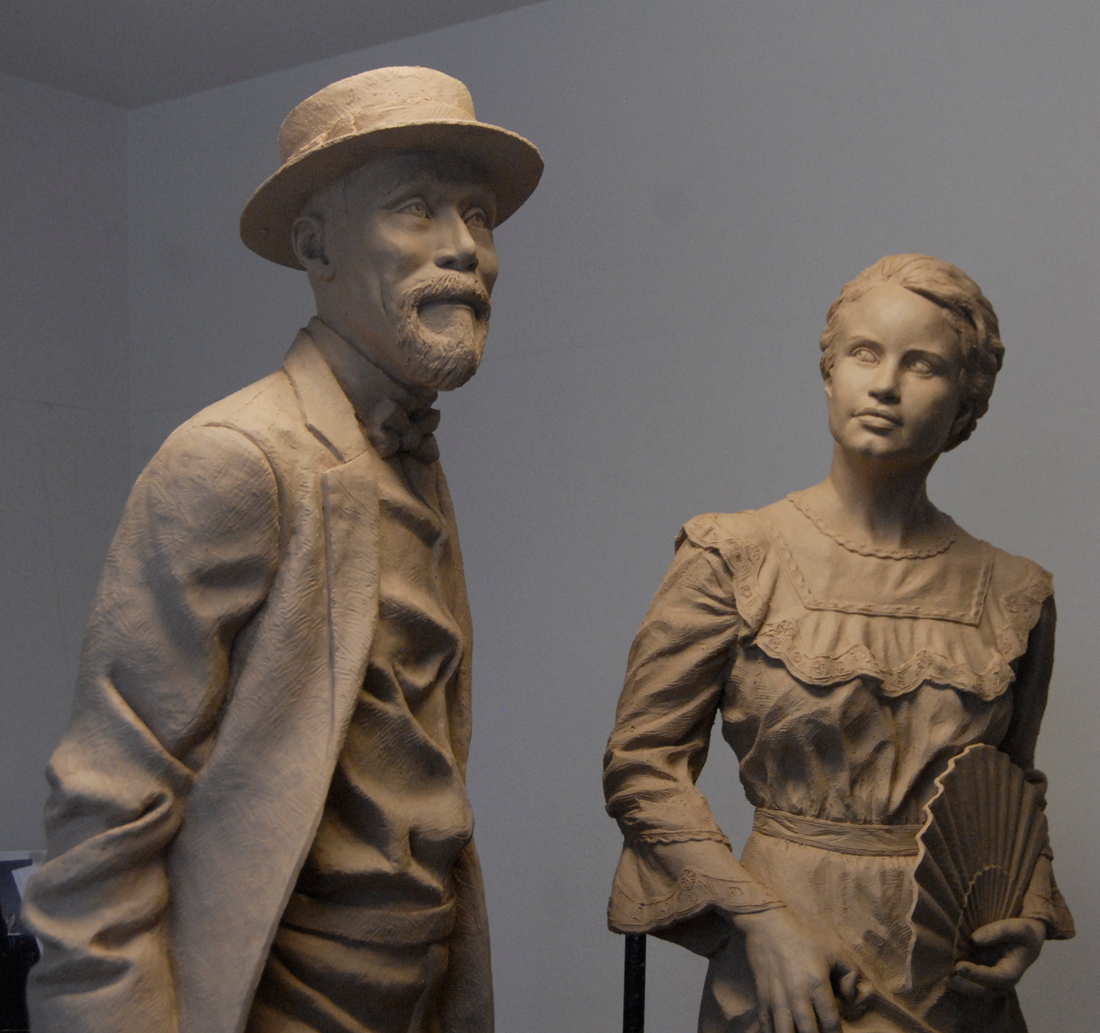 In 2016, I received a commission for this sculpture of a 1905 tourist to the town of Colonial Beach, Virginia. Here is a close-up of the finished plasticine prototype with the companion piece, a woman, done by another sculptor, Kathleen Farrell.

For purposes of practicality, I worked on a movable platform, to which my assistant, Dante DiBartolo, fixed a welded armature. Then we continued creating the figure with sculpture wire. To start creating volume, we added polystyrene foam. The idea is to avoid using too much plasticine which quickly becomes very heavy. The head is detachable allowing for the comfort of working on it separately. 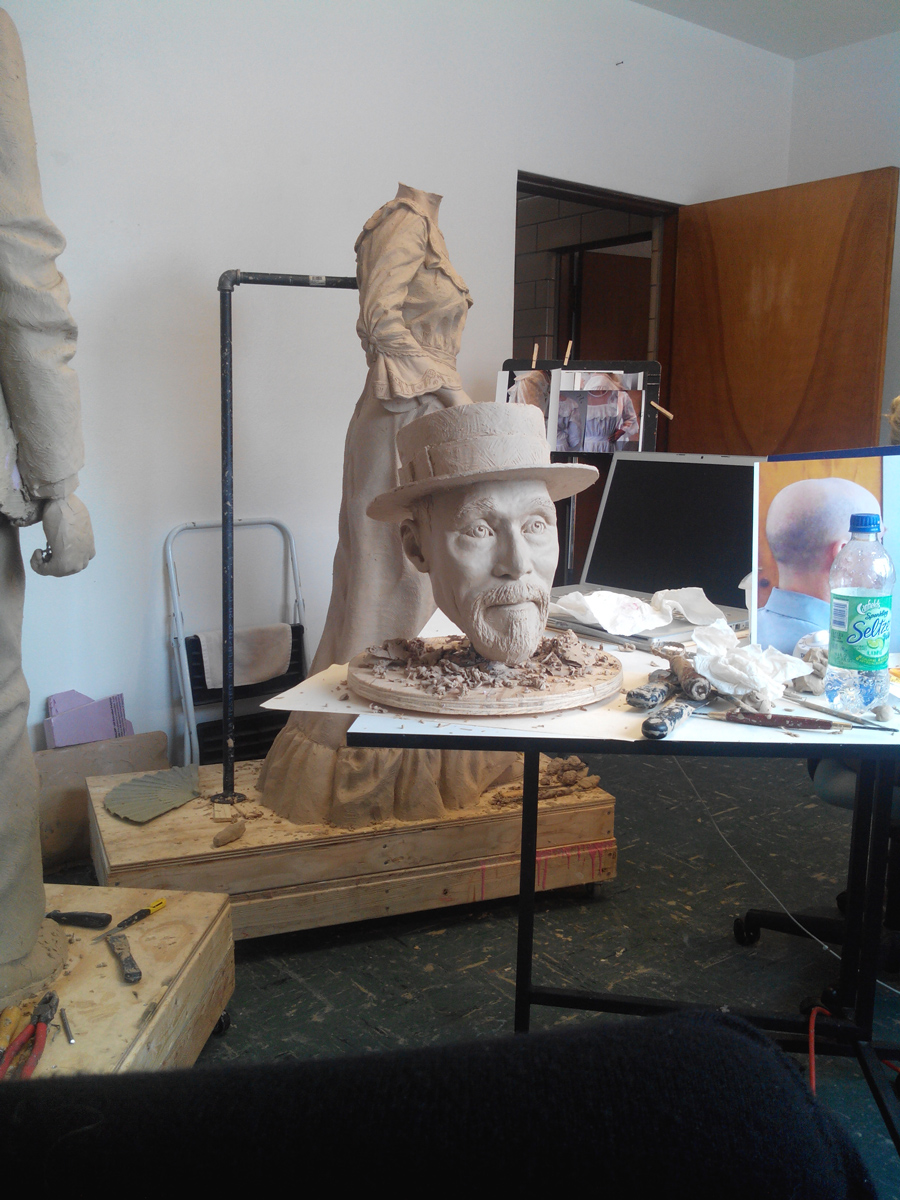 As always I work from the inside out, from a live model: :

Men's clothing hasn't changed all that much since the early 1900's. Among the prosperous, boater hats were popular and my tourist is carrying a carpet bag rather than a suitcase. Ties were bigger, and shoes did not have laces. Suits were cut a bit differently with less emphasis on the width of the shoulders that we see today.

From beginning to end the process took about two and a half months, working full time. Then it was sent to the foundry which took another three months to make the silicone and fiberglass molds and cast it in bronze.

Thank you for posting @kathleenscarboro.

Apologies....for not coming by soon enough to vote on your work of John the Baptist.....excellent work...so very well done....capturing his youth and vigor....afterall he was the herald of the King.

Thank you @bentleycapital. What's funny about his smile is that my model was not a happy man. His general facial expression was one of anxiety. I kept saying to him, "SMILE Frank, SMILE! So I turned an anguish ridden man living more or less on the street to a prosperous, elegant, and self satisfied businessman.

You are so talented! Congratulations on such a fine piece (and the commission). It must have taken a lot of effort to achieve such a great result. Kudos to you!

Thank you for your encouraging words, @vendee.

Who will be doing the patina, you or the foundry?

@leoplaw, here are the sculptures leaving the foundry with their dark green patina (done by the foundry guy). The photo is not a good one, and I never got any photos of the pieces installed. Thinking I should probably contact the town and ask for some in situ photos. 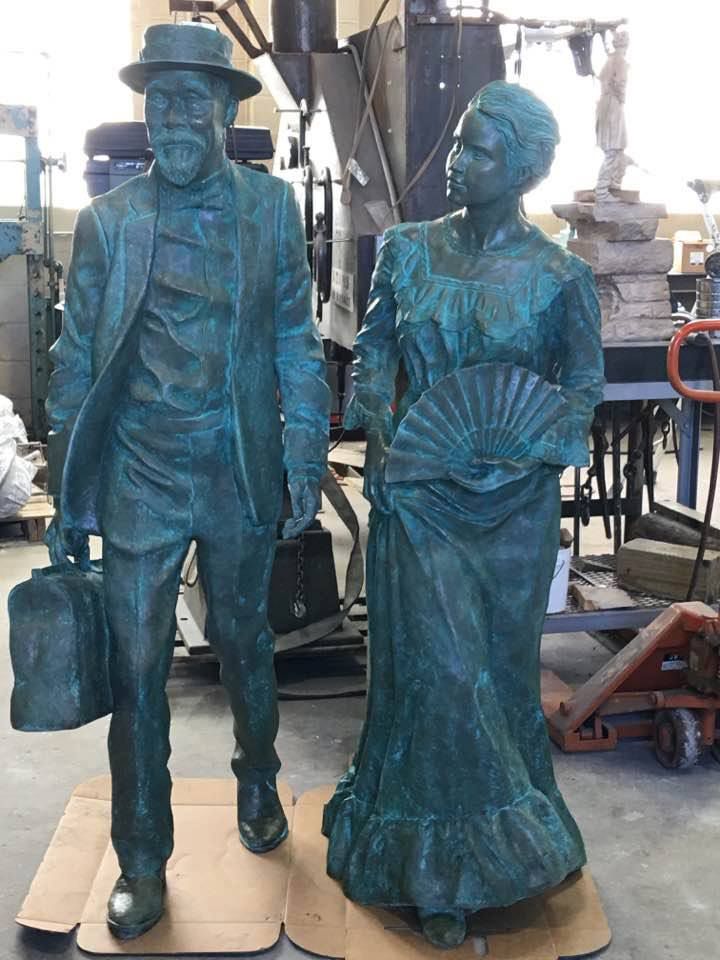 These two are looking mighty fine in their patina.

Aw thanks @leoplaw. I called the U.S., and they haven't installed them yet.

makes me wonder: did you do it there or ship it? I am almost guessing the later, since shipping something like that must cost more than actually going there yourself.

Yes Otto we used a shipping company. It was an expensive project - about $90,000 if I remember correctly. Over half of the money went for casting, shipping, supplies, paying models, assistants...It is thanks to this project that I was able to build my new studio.

Great artwork process @kathleenscarboro. It would be nice to see those sculptures a live :)

I couldn't agree with you more, @dabird; I myself never saw them installed. I sculpted in Illinois, and the pieces were sent to Virginia when they left the foundry. By that time I was back in France.

Congratulations @kathleenscarboro! You have completed some achievement on Steemit and have been rewarded with new badge(s) :

Hello! I find your post valuable for the art community! Thanks for the great post! ARTzone is now following you! ALWAYs follow @artzone and the artzone tag, and support our artists!

Interesting details and work processes.
Yes, weight can be a problem, so your solution works good. When I worked on stage designs eons ago, we used industrial insulation spray foam for some stuff. On something precise as this, it would not wok that good, but we made supports with wood and rebar, covered with cloth etc and sprayed it - some surreal stuff was to pull pantyhose over a wood support and spray-fill it; controlling it before it sets by had and tying.
Working from the inside out: makes me think of seeing that with Gustav Klimt on an unfinished painting - apparently he painted (some of) his (female) subjects in the nude and only dressed them later.

That's interesting what you say about Klimt and makes sense when you think about his paintings. Actually, in the past, we did use spray foam of a particularly solid variety. We got it from Dow chemical; how healthy was that? Our sculptures started out looking like swamp monsters.

haha, funny - but I think that may have been the same product we used. Where it worked really good was to build the Badger cave for "Wind in the Willows" - a segment of that tale, "Toad of Toad Hall" was our annual Christmas show at the UofL Drama Dept. - I have not checked lately, but I still got credit years later on the show posters for stage design (I also painted Toad's ancestor portraits).

Really good work!!!! I like also the patina that you have chosen :-D

Amazing Clay Art and I like to do Clay Art too hehe. Thanks for sharing, hehe. I'm Oatmeal Joey Arnold. You can call me Joey.