The Making of the "Dionysus" Oil Painting

As I promised earlier, I thought to share a glimpse into a much messier and indeterminate painting process. "Dionysus" was just such a work. Originally, I was fascinated by a bird, the Cock of the Rock , of which approximately 40% engage in homosexual relationships, some of which never copulate with females of the species. The structure of the birds' crests stuck in my mind, so I pulled it into the beginning of a composition. As seen below, the progression came to morph the crest into something bearing the resemblance of a citrus slice with seeds. 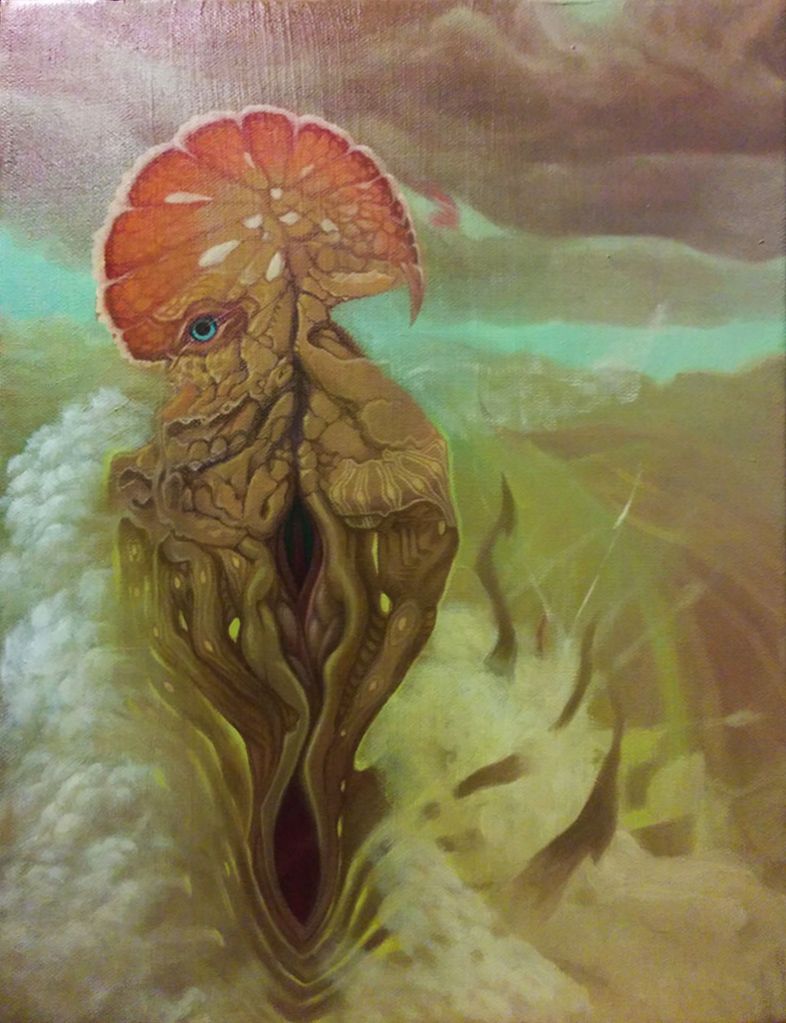 In addition, within the example above steam or cloud like structures vent from and mingle between the iterations of the creature's body.

As I had gotten to this point, a wordless voice, an impression in my mind, told me this was "Horus". It came as a direct and received transmission; its suggestion was not the typical and expected associative generation of an idea--despite being an easy point for such an association, given its humanoid body with a bird-inspired head.

There was an archetypal otherworldly presence reflecting back at me --a mixture of ancient civilizations, alien, hyper-dimensional consciousness--not of my own.

As I began to work more on the image the cloud like structures began to bear verdant foliage--at first grape leaves and then unbloomed yellow rose buds and grapes. I recall the yellow rose buds seemed to be like snake eyes looking at me. Furthermore, the body of the entity became more detailed, developing more complex color and resolved structure. The Egytian old world transitioned to ancient Greek; sentiments of physical pleasure and consumption, sensualism, and the suggestion of eros.

In conjunction the region of the head gained light and contrast, reminiscent of my psychedelic experiences of illuminated crown and 3rd eye.

Below is an image where the entity begins to emanate or vibrate, and two linear structures jut out from the otherwise organic foreground, giving perspective, variety, and an interjection of modernity into the scene. 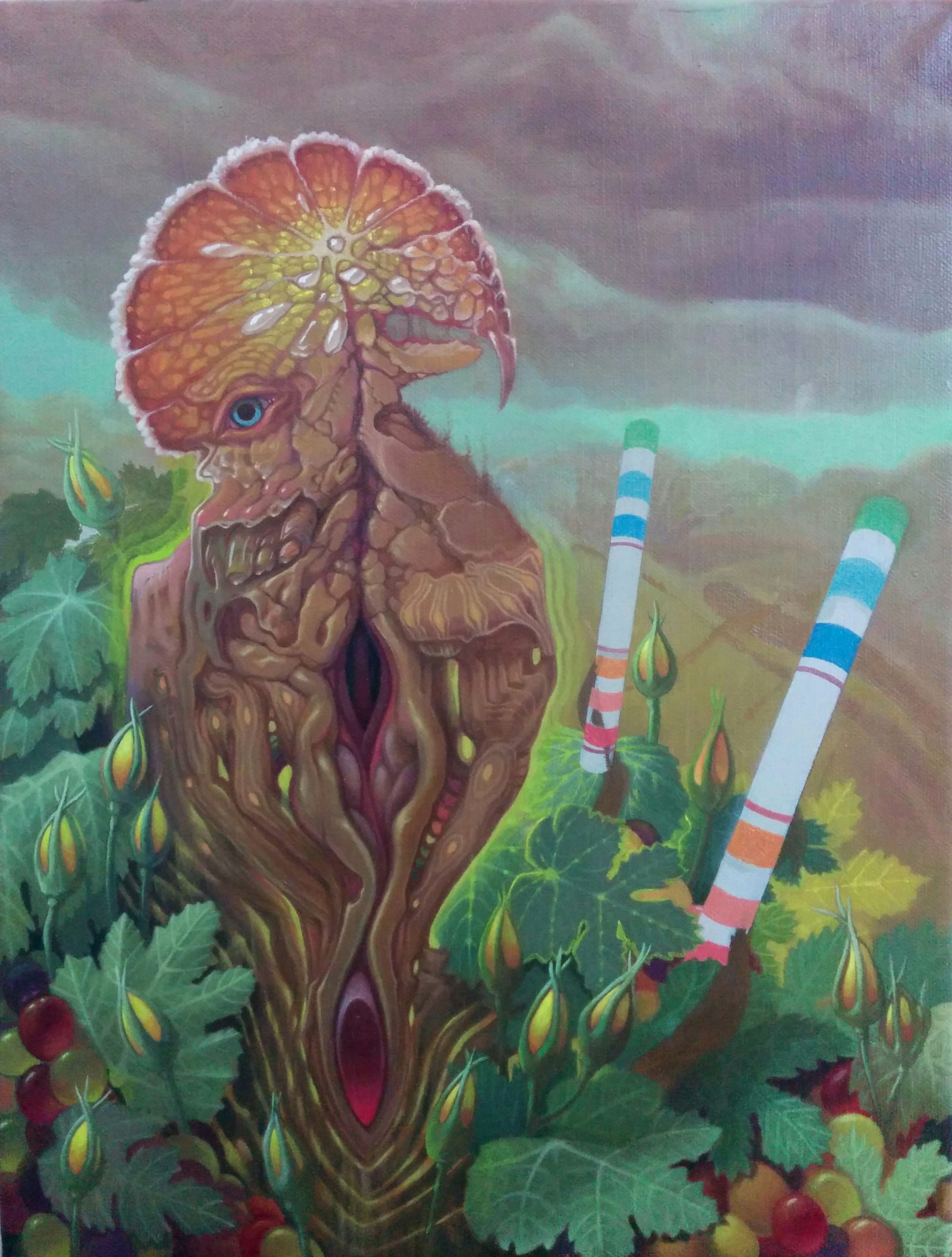 At this point the figure is resolving closer to completion, and the foreground undergoes greater rendition.

Below, its shoulders now are adorned with structures suggesting cloth or a cape, in no small part influenced by impressions of Caravaggio's "Bacchus". This helped to cohere the entity into the scene. Also a background lends perspective to the environment, and overall detail is significantly refined throughout. At this stage the work knows its name "Dionysus". Within a short time, the final form is produced: 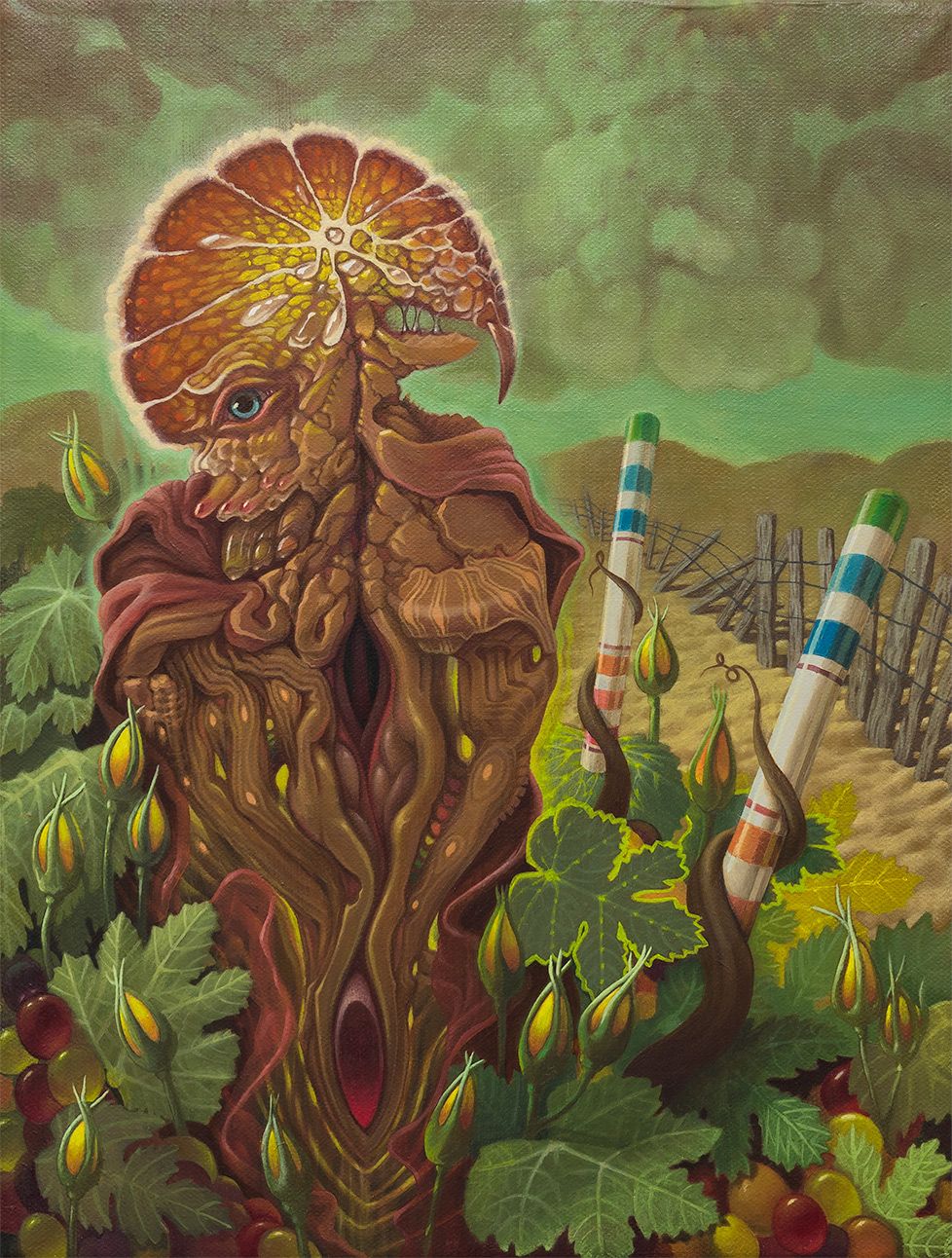 An anthropomorphic entity sets within grape leaves and rose buds. It exists between the realms of terrestrial and alien, flora and fauna, fruitfulness and decay. Its “heart” appears as a dark orifice reminiscent of a bony nasal septum, but fleshed over, blushed Merlot red with tissue–appearing almost vaginal. The entity holds at its base another iteration of that same shape, but not as an orifice or void–more akin to polished, mounted stone. Symbolically this creates a dualism along the vertical line of the body.

The head of this creature blends visual properties: sperm-like translucent orange seeds, dendritic pith, and citrus flesh. It summarily results in a radial mandala characteristic of various enlightenment traditions–enhanced by its own independent illumination. Its “brain” exists as the fruit of the body.

Weaving through grape leaves and taking on the quality of plant tendrils, this Dionysus holds two long cylinders. The objects are distilled representations of the color palette of the painting itself, while also being reminiscent of the color striping of 80’s boys’ and men’s white socks. As compositional tools, they contrast against the dense organic nature of the foreground and build a bridge into the background, where we notice sand and a falling beach fence flowing into the distance.

The two highly cylindrical objects also allude back to my painting [“Phra Nang Farang”],(https://steemit.com/art/@codyseekins/phra-nang-farang) both with respect to the beach ball in the scene, as well as the striated, colorful nature of the popsicle within that work.

Here, Dionysus is framed by fruitfulness despite some morbidity and darkness. He sets within an ambrosia nearing the edge of fermentation–the chrysalis for wine.

Excellent, it is very interesting to have an insight of the artist's thoughts while creating art. And I am amazed at all the symbolism and connections that went through your mind, and materialized in this impressive painting. Horus & Dionysus, both connected to Christ -- all aspects of the same principle: salvation through death & rebirth, just like the chrysalis you mention above. @Nyarlathotep I really appreciate your analysis of the work and the content I shared in relation to it. I am always somewhat surprised myself when a piece "comes together", with respect to the symbols, relationships, and interpretations. When various factions of the mind bear synthesis the work feels complete. You are right, there is a western Christ consciousness aspect to this, in addition to a psychedelic association, and even Buddhism, on a variety of levels visually and symbolically. The relationships between Horus, Christ, and Dionysus was not so much something I studied and applied, as something I received and conveyed. Sometimes it is only after I finish a work and research the literal definitions/etymologies of symbols and archetypes within it, that I more fully understand what exactly it is as a manifestation. The fractal you shared seems to integrate for me into the body of the Dionysus figure, specifically its orifices--a kind of proto erogenous organic consciousness. Interesting.
Thanks for your insight and engagement! :-)

@rosatravels thank you very much!

extraordinary, one of the best artworks I ve seen at steemit on oils.

@sachgsach So glad you enjoy this piece. Thank you!

Very creative painting @codyseekins
You have some serious talent here.

@mphil I really appreciate that. Thank! :-)

@moonalight Thank you very much!

@hazelgriffiths There is definitely a feminine element to much of my psychedelic work. Often a vaginal emergence comes through. Typically it does so as an emergence of corporeal realization of some kind. In fact I often call it the "psychedelic vagina". I see it occasionally in other surrealist/psychedelic artists' images, too. The female principle here is also related to a transgender sentiment, or the influence of female energies in my experience--particularly that which I've felt as integrated into my sense of being. Thanks for stopping by and interpreting the work. I'm very glad you found some good reflection in it. Thanks for sharing.

this is art, thats you did @codyseekins