Time to blow off some steam and make more STEEM!!

Reporting for Airhawk-project is @aderonkemi and I'm here to talk about the progress the community has made since the beginning of the week. As we all know, Friday is a day of reckoning as well as relaxation.

I'd love to quickly brush through last week's posts where we had the post on earning as a minnow on steemit by @drepo15 where he broke down the major concepts behind steem power and earning on steemit. We also had the post from @dorth presenting the "white paper" for our Airhawk-Exchange.

The week started out with @diana01 emerged the winner for our just concluded weekly contest with a reward of 12sbd rewards for her effort. The weeks contest was aimed at encouraging members to use the markdown styling guide for their blog posts. You can find her gratitude speech which she titled Airhawk-Project, Keeping Faith. Thanks to the founding members who sponsored this contest with their humble donations. Keep yourself updated on the blog for the next contest which would be announced soon. Meanwhile, await the announcement of another contest shortly on the group.

@rickie took us into the adventure with our airhawk as he started his series on the top contests on steemit. He started with compilation of Literary Contests where he mentioned the likes of Sankofa Literary contest, STACH'S short story, Spotlight and so on. If you didn't see the post, here is the link. Meanwhile, watch out for him next week as he brings you another of the contest reports.

So we had an august visitor in October, sometime last friday, @stellebelle dashed into our group. 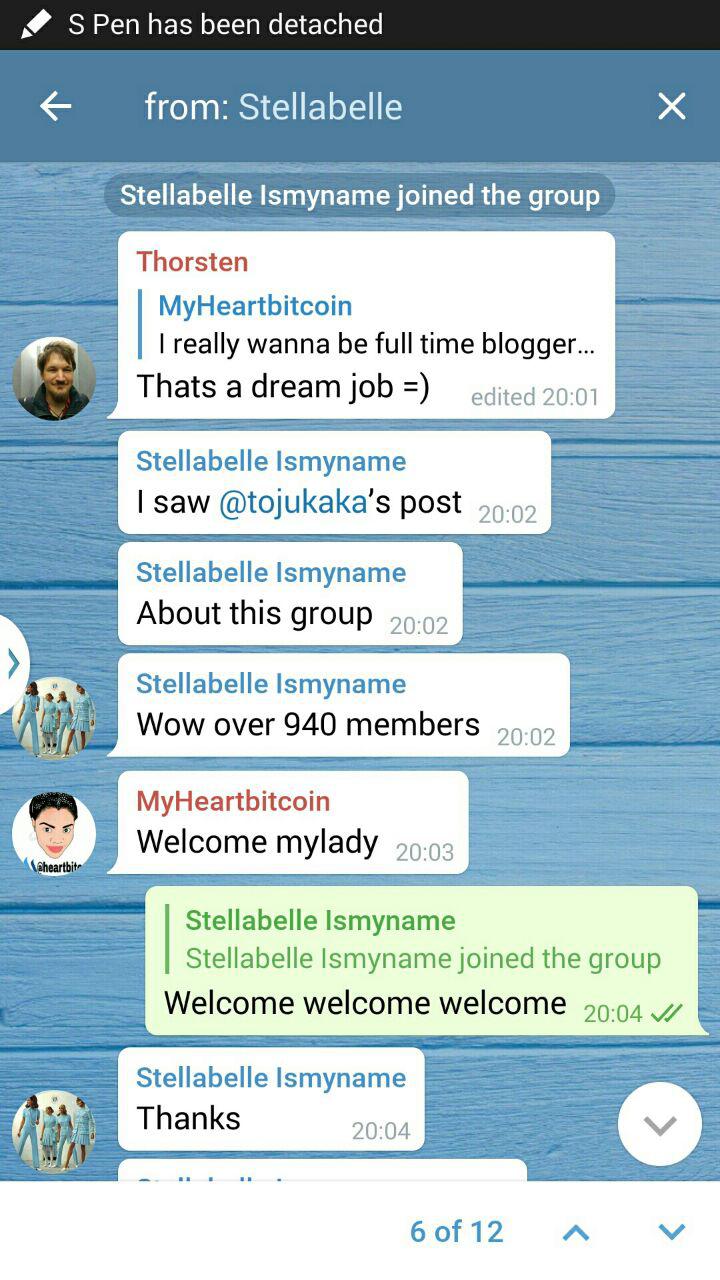 She won't stop being creative as she recently made some humorous Steemit inspired gifs which you would find useful in your day to day chats and even usable on posts. Below is one of my favorites: @dreamchasser held two sessions. The first was on the SMT tokens and the future it portends for the media publishing and companies and the resultant effect on better value for steem and it's general growth in all. Although this took place last friday, I feel obliged to include it in this report. 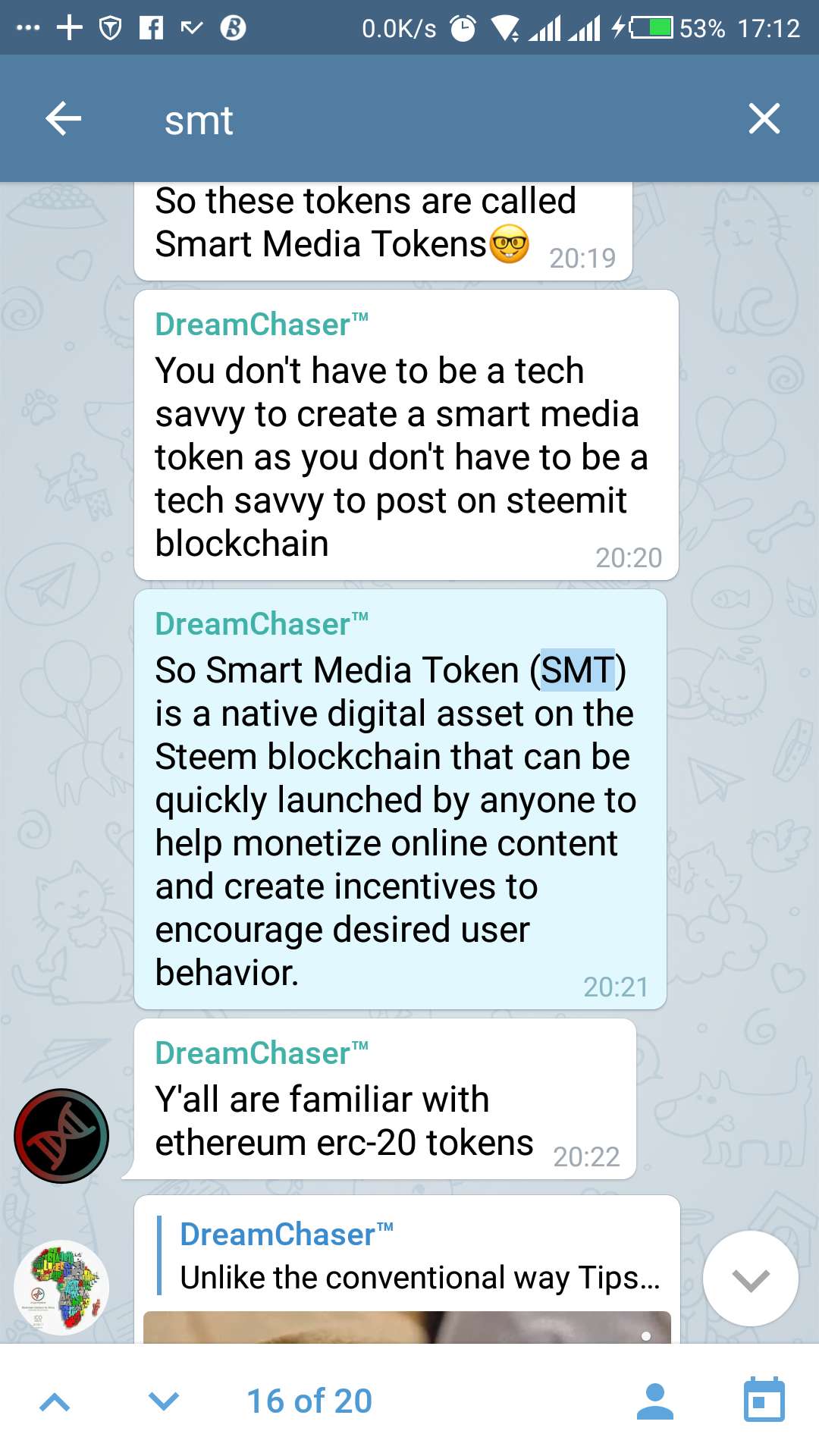 @dreamchaser also enlightened the group about who witnesses are and the need to vote witnesses from the 30 slots available to each and everyone. He didn't fail to explain the pros and cons of picking a better witness who has in a large way contributed to the growth of the steemit community as a whole. In some of his words, I quote;

DreamChaser™:
Now Steem blockchain produces blocks just like other cryptocurrency blockchain, it's a decentralized blockchain thing and it needs a varied set of people with running computers to create these blocks. So Steem uses a consensus mechanism called Delegated Proof of Stake, or DPOS. A steemit witness is someone who plays a crucial part in how the STEEM network functions. Witnesses are to STEEM what Miners are to Bitcoin.
A STEEM witness is a person whom operates a witness server (which produces blocks), and publishes a price feed of STEEM/USD to the network........

Teamwork is at play again in the airhawk-project as the need to maintain its curating prowess is at the heart of all. This brought about the issue of renting SPs which of course has been properly explained and broken down by @drepo15 here in the second post on our blog . There is the creation of 3groups for contributing steem which was not without consideration for those who only has little to offer. The intention is not to extort but rather encourage everyone to work and contribute as a team towards building a better community. Below is the diagram illustrations of the proposed lease categories. Also the analysis of curation according to leased SP. One of the aims is to help members get some commitment gradually into steemit before they could find their feet. No surprise though, thesame guys who sponsored the last lease have already sent in their steem in readiness for the next journey.

The Airhawk Exchange has since started operations. You can now easily exchange your Steems and SBDs into local currencies. Join the airhawk exchange here to enjoy these benefits.

We got the talent, we got the initiative. "Cartoonize" your display picture at the terms of our friend @camzy. Also, we have a graphic designer and a cake maker @ambmicheal. You can check @camzy's blog for his several portrait galleries.

Pheeewww!!! Its been a tough week and a productive one. Our mission always is to encourage new steemians to strive to stay relevant in the community and also to train redfishes on their journey to whales land.

We welcome every form of contributions to the AIRHAWK PROJECT SCHEME and together we strive to achieve a STEEMFILLED Steemit community and beyond. ___

Join us on Telegram HERE

Nice report. It's been such an eventful week. Glad to be part of the family. Good progress all round... Pls let's keep going

Yeah... Its been wonderful so far. Congrats to you tho

Lol... We are all striving to become better everyday. Thanks for your support so far...

Very interesting reports so far, @aderonkemi STEEM ON! & @airhawk-project keep on the good work.. There is no way I can take in this online earning stuff that I can forget this ideology.. May the Lord bless the master planner @dreamchaser, if am not mistaken.. He was also the one who invited me to this project ..may @airhawk-project never retrograde.. Amen

Another lovely package put together, by the @airhawk-project. I love this review @aderonkemi. Brilliant one guys.

Good job you guys are doing.... Keep it up

Kemi, u r good at this. We'll soon crown u our chief press (wo)man

Hahahahah... I'd be honored really. Thank you.

Wow nice update.. You should be a newsreporter or journalist... Lolz.

Thank you. Part credit goes to my boss @dorth

Beautifully recounted. Airhawk is moving to the moon, no doubt. More power to the brains behind the project.

Wonderful report. I like the progress so far. Keep it up @airhawk-project.

Congratulations @airhawk-project! You have completed some achievement on Steemit and have been rewarded with new badge(s) :

Congratulations @airhawk-project! You have completed some achievement on Steemit and have been rewarded with new badge(s) :