"The Devil Plays Mr. Darcy" Part 2: From Heroine to the Dazed Damsel in Distress...

joylovestowrite (52)in #writing • 3 years ago (edited) 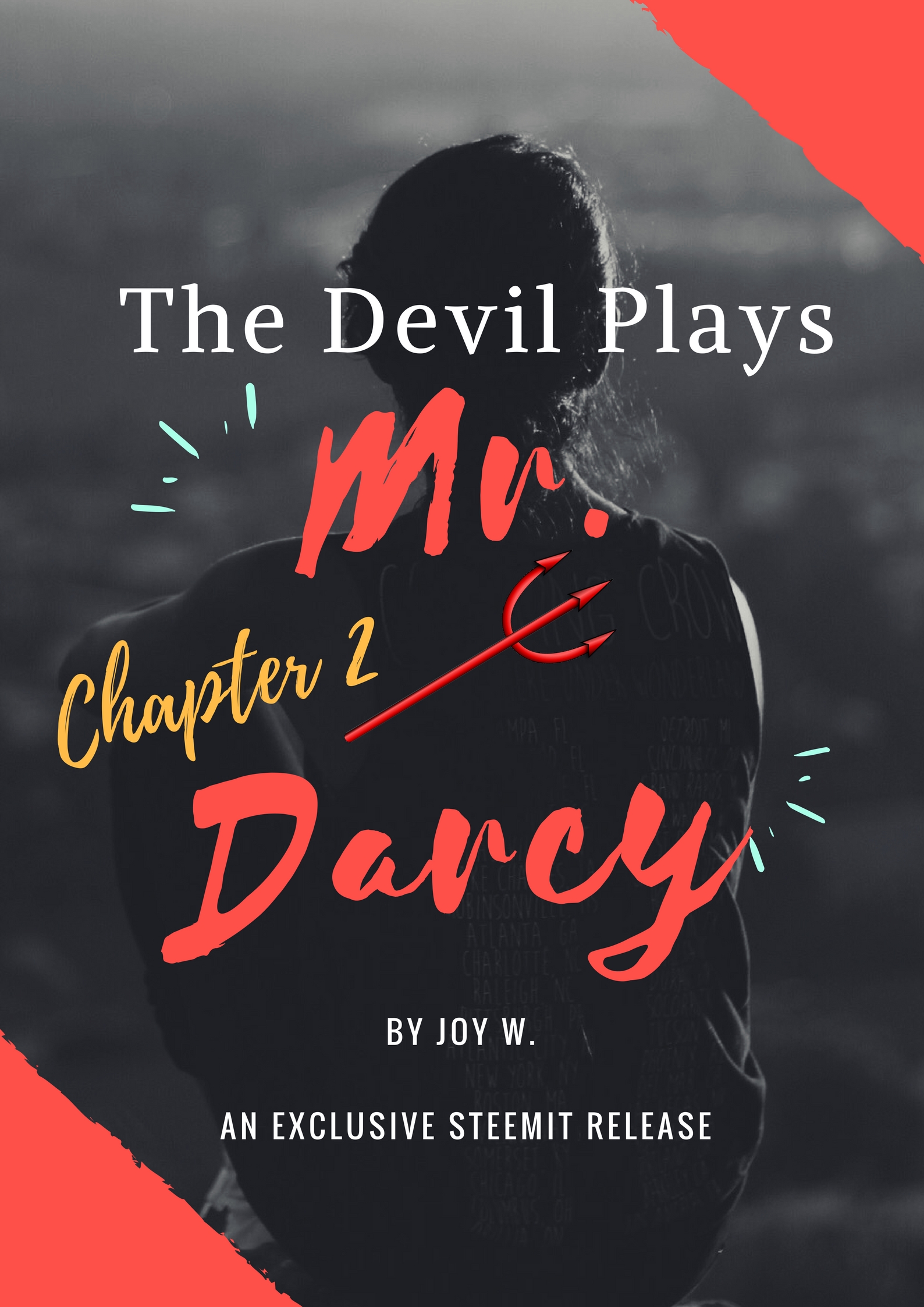 Find out what happened to Brad & Janice after the stage accident...

***Please note that this chapter won't make any sense unless you've read chapter 1. Click here to catch up if you're just joining us in this series!

Part 2: From Heroine to the Dazed Damsel in Distress...

The pain in Janice's ankle prevented her from standing, not that she wanted to. With her and Brad's arms lingering around each other after sheltering themselves from the flying shards of glass that had scattered all across the stage, she suddenly felt like she was a hero starring in her favorite old movie:

After all, who else but her true love would comfort her the way he did, making sure she had no other injuries and then helping her up when she couldn't walk?

Her two friends also instantly believed it was more than mere gratitude for saving his life that led him to burst through the double doors into the lobby carrying Janice in his arms like a Herculean hero.

While to the receptionist, Linda and Ben looked like dumb kids when they leaped out of their seats with jaws dropping down hard enough to break a hole in the floor...

... what the receptionist didn't know was that on the inside, they were actually celebrating like this:

The director's assistant emerged from behind the couple and barked out to the receptionist:

"Mary, take them to the teacher's lounge in the back to get some ice for her ankle. Now, please! She's sprained it, and the director doesn't want to stop and deal with it right now. We barely have enough time to finish today's auditions as it is."

"Hurry up! The whole stage is a mess because one of the lights came down, and he's got the interns sweeping it all up right now."

The Assistant Director turned to Ben and Linda, saying:

"Whichever one of you is next, just wait exactly five minutes -- no more and no less -- and then come in, ok?"

She then snapped back around to the desk clerk and called out, "How's that, Mary? Do I have to do your job too now? Make yourself useful." She threw her hands up in the air and disappeared behind the double doors again.

By this time, Brad had managed to set Janice down in one of the lobby chairs.

"We've got to get you to a doctor!" Linda gasped, seeing the swelling of Janice's ankle.

"But then you'll miss your auditions," Janice said, still wincing from the pain but trying to hide it while she kept looking at Brad. Looking at him helped numb her pain.

"Where's the teacher lounge? Please, tell me where to get the ice," the pleasantly attentive Brad begged Mary as he approached her behind the desk. She volunteered to bring some back from the teacher's lounge and dashed off.

Meanwhile Ben pulled Linda aside, saying, "Linda, come and help me find the Tylenol in your purse."

"But you know where-"

Ben glared at her, and then Linda had the sense to be quiet and listen to him whisper his latest plans to her in the corner while they rummaged around a bit unnecessarily in her large purse:

"That girl's damsel-in-distress card is the best one she's ever played! Don't you go cock-blocking her Mr. Right now by running off with her to the hospital -- not yet."

"But she's not acting! She's really in pain," Linda hissed.

"I know! It's so perfect. Follow my lead," Ben winked, grabbing the bottle of Tylenol and whisking it off to Janice.

Ben dropped a couple of pills into Janice's hand and said, "Alright, swallow down these two, and you'll be fine."

Janice gulped the pills down right away, and Brad instinctively grabbed his bottle of water and offered it to her to help get them down.

Ben smiled to himself like a cunning Chesire cat, knowing exactly how to play the next move, which Janice would be too shy to do herself.

"I'm Ben, and that's Linda. We've all been friends with Janice for forever. Thank you so much for your help."

"Well, I kinda owe her. She pushed me out of the way, otherwise that light probably would've put me in the hospital instead," Brad admitted with an appreciative twinkle in Janice's direction.

Mary returned with a frozen, half-eaten pack of old ice cream for an ice pack, made a small attempt at an apology by saying, "We didn't have anything else," and gave it to Janice to apply to her ankle.

Ben continued, "She needs to get to the doctor immediately. What if it's fractured? Who knows how long it would take to call a ride ... You see, we'd love to take her to the hospital, but actually, we all came in Janice's car, and now she can't drive even though she's the only one listed on her car insurance, so ..."

"I can take her," Brad immediately offered.

"Oh my God, that would be so great," Ben grinned. "Then Linda and I will just wrap up our auditions here because - well, you know how fussy directors are. And then we'll call you, Janice, as soon as we're done here to figure the rest out."

Janice's surprise melted into an all-too-cordial agreement, and only Linda remain stunned at the speed of Ben's matchmaking plans.

Within two minutes, Brad was insisting that Janice shouldn't even so much as try to hobble for fear she might hurt herself more. Again he lifted her up and now carried her out of the front door to his BMW.

Ben was as satisfied with himself as if he'd just sent her off with the Prince of Wales on a white horse, but Linda protested in a low whisper out of the earshot of Mary:

"Ben, I want her to have a chance, but we don't even know this guy! Are you sure this is a good idea?"

"Please! It wasn't even my idea. I was just doing what Janice wanted. I think it was the best idea she's ever had. Damn, I gotta admire the way that girl has stepped up her game!"

"If something bad happens to her, you are so dead. I mean it."

"The way he was looking at her, I'd say she's already got him wrapped about halfway around her finger. If she's smart, she'll get her underwear wrapped around his bedpost next. Mmm ... that lucky girl!"

"You're impossible," Linda mumbled, rolling her eyes at him.

The assistant director opened up the door and called, “We’re ready now. Come on!”

Linda sighed and went ahead, and life returned to normal in the audition hall.

Miraculously, Ben and Linda’s auditions were a breeze after that. Their futures in theatre paled in comparison to the plight of their friend, and that distraction conveniently made them focus intensely on the present moment.

It was odd to think that one friend’s calamity could be so helpful for an audition, but they both had to admit to each other by the time it was over that they’d probably performed the best that they’d ever done.

A few phone calls and texts later, they learned Janice was already sitting in front of a doctor in the ER.

“This guy drives fast! How did he get across town in five minutes to that hospital? And it’s almost rush hour!” Linda exclaimed when she pulled up directions to the hospital they’d mentioned on Google maps in her phone.

“Thank God for rush hour. Our Uber is going to be conveniently delayed,” Ben chimed in, insisting that they stall for more time to give Janice more “bonding opportunities.”

While it should have taken Ben and Linda about 20 minutes to get to the hospital at a reasonable speed in rush hour, Ben kept “remembering extra stops he needed to make” along the way.

Linda could hardly keep her mouth shut as she watched him stopping to buy snacks from a grocery store, and then God knows what from the drug store.

“You’d better be finished, Ben. I’m done with this scenic-route bullshit,” she insisted, directing the driver straight to the hospital after that.

By the time they finally walked into the hospital, more than an hour had passed.

Linda led the way through the sterile-white walls with determined strides while Ben trailed casually along behind her as if they were on a tour through the neighborhood zoo.

She was overjoyed to see Janice, sitting with a big smile on her face and a doting Brad by her side. She was already wearing an ankle brace, which was elevated up on a pillow on her bed.

“I’m so sorry it took so long to get here. Our Uber was terrible,” Linda blurted out, not wanting to reveal Ben’s plans. “How are you? What did they say?”

“Oh, it’s just a sprain,” Janice replied. “I can start walking on it a little after a couple of weeks, and then I should be fine. Brad helped me get crutches and everything.”

Brad piped up, “And I was just explaining to her that I know the best acupuncturist who can do wonders with sprains. I sprained my ankle before playing soccer, and their treatments cut down my recovery time in half. Let me call him and set up an appointment for you. It’s no problem, really.”

“But how much does it cost?” Janice asked.

“Oh no, don’t worry about it. This is on me. You practically saved my life.”

As they sat together with the adorable new “Branice” couple narrating all of the little details they’d missed thus far, Linda had to admit to herself that Brad had all the characteristics of a well-meaning, honest, trustworthy guy. She couldn’t help feeling proud of Janice for her new catch.

She was forced to congratulate Ben on his plan by the end of the evening when they ended up returning home with a friend who’d won the phone number and convenient excuses for several “dates” with a drool-worthy guy that she was falling fast for.

A couple of weeks later when Janice had seen the famed acupuncturist twice already, they discovered that this doctor could in fact numb the pain so much that she forgot her ankle was ever sprained.

To celebrate Janice’s rapid recovery – and the small victories for Team Branice – Brad popped over at her house to surprise them one afternoon when Ben and Linda were all hanging out.

First, he gave a little bouquet of sunflowers to Janice, which made her squeal. Next, he gave her the cutest of kisses on the cheek in front of everyone before declaring, “I’ve got news you’ll all want to hear!”

Brad then strolled into the front room and plopped down onto the living-room sofa.

“Well, the cast list doesn’t get posted until tomorrow officially… but, I have a friend who just happens to have seen it in the director’s hands today.”

They all held their breaths, bracing themselves to hear the fate of their summer …

Click here to keep reading part 3: Scorning the Devil at the big party...

*** Thank you so much to all of you Steemians out there reading this! Because of your appreciation in upvoting, I’m going to continue posting future chapters every three days. Please stay tuned, and remember that you can request alternative endings in the comments later on in the story. Whenever three people agree in the replies that something should be done differently, I will accommodate your ideas to keep the story as fun as possible.