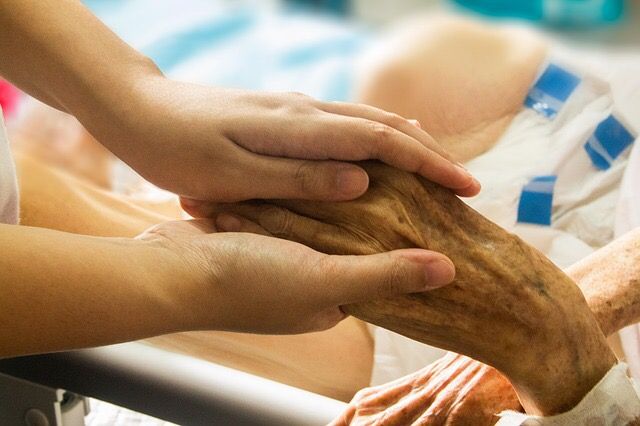 ‘Who are you?’
The old woman whispered the words with great effort. Her nose and mouth were covered with a breathing mask that fed oxygen to her through a long hose plugged into the wall. Her grey hair lay flattened by the pillow, limp like she was. Lifeless as she soon would be.

He stood at the foot of the bed watching her struggle to breathe. It would be a glorious ride.
She tried to point, but the pretty little nurse with the sharp face and grey eyes pulled a fluffy blanket over her arms.
‘Relax love.’
‘You know the doctor wants you to be still. You can’t be moving about.’
‘But the man..’ The old woman’s hand trembled, trying to lift off the white sheets.
‘Oh don’t worry about him.’ The pretty nurse glanced at the foot of the bed.’ Third time this week, patients tried to tell her about 'the man'.
She brushed the thought away. There was no man.

Must be the morphine

‘The doctor will be in soon Mrs. Moody. You rest ok? You’ll see. In a day or two, you’ll be back home with your family.’
The old woman stared at the foot of her bed.
The man standing there was so familiar. Older. Bald and shaved till his pink skin shone. Jeans, neat red plaid shirt over a little pot belly. He could pass for anyman in anytown USA.
The nurse moved briskly around the bed, tucking the blanket around her patient. She glanced at the IV up on the bed stand. Slow and regular. There wasn’t much more she could do. Moody had multiple tumors, spread from her stomach right into her brain and everywhere in between. Morphine, time and patience. When God was ready he would come get her. Until then, all she could do was keep her patient comfortable.

‘I’ll look in on you in a little bit ok Mrs. Mody?
The old woman nodded.
‘If you need anything?’
‘Press the buzzer. I know.’ Her eyes closed and her breathing deepened.

At least she’s not in pain.

The pretty nurse, took one more glance at the foot of the bed then moved towards the door, sensible shoes squeaking on the tiles. Moody wouldn’t last the night.

The man watched her go. As soon as the door pulled itself shut, he walked around beside the old woman.
‘Betsy?’
Her eyes fluttered open, found his.
‘Don’t I know you?’ She struggled to breathe. Her breath shallowed. Filled the face mask with white mist.
‘Probably. Do you know why I’m here?’
She focused on his face. ‘But I know you.’

He smiled. This was going to be great.
‘We’ve met before Betsy.'
Recognition flashed in her eyes.
‘Larry?’
He grinned. ‘Yeah. Now you got it. It’s me. Larry.’
Her eyes fought to stay open. Morphine threaded its way into her brain. She would be out soon.
‘You still have to cut the lawn right?’
He laughed.
‘Yes Betsy, but that’s not why I’m here.

The heart rate monitor next to the bed beeped once. Betsy’s heart rate slowed.
‘Why can’t the nurse see you?’
‘I’m not here for her. I’m here for you.’
‘Me?’
The monitor beeped twice. If Betsy’s heart slowed any further, a crash team would mobilize.
‘But you’re my lawn guy. Why would..’ She took a shallow breath.
‘..you even be here?’

He reached under the blanket for her wrinkled hand. She held his fingers weakly.
‘I’m just a friendly face. You’re going back tonight.’
She nodded. ‘This old body’s had it.’
He squeezed her fingers gently. ‘Lady you rode that sumbitch till it fell apart.’
She managed a tiny nod. ‘I did, didn’t I?’
The monitor began to beep loudly. Betsy’s heart stopped.

The nurse with the pretty face raced toward the room. The crash team would be behind in moments.
When she burst through the door, Betsy had a smile on her face, the rest of her was already gone.

Betsy felt her body slump. backward.
She was free.
Light.
She floated for a moment.

Larry still held her hand.
‘Relax Betsy. When I let go, you’ll go back o.k.?
She found her breath.
‘Back? Larry what’s going on? Why are you here?’
‘Turn around.’ He loosed his fingers.
On the bed her body looked so broken. So beaten. She could see red lights flashing on the heart rate monitors, saw the young nurse race to her body. There was no sound.

‘Larry, did I die?’
She turned back. Larry stood outlined in pure white light. It bathed him, Seemed to fill the room behind him.
As his fingers left hers, she felt a tug. It was gentle but insistent.
‘Yes Betsy, you died. How does it feel?’
His fingers lost contact with hers.
Bright light wrapped around her. Filled her with peace. She realized the pain had stopped. The choking and struggling. The tiredness. They all fell away.
‘I feel…. good Larry.’ His face was swallowed in the light.
‘I know right?’ He said. ‘Enjoy the ride.’
Then the light sucked her out of the room.

Motion. Her body rocketed outward. She wondered for a moment, why not upward?
There was no sound, only rings of awesome light. Blues, flowing into greens and yellows. Faster. Red explosions around her. Orange halos of fire. She blasted past them in a white heat.

For a heartbeat everything stopped.

She saw herself in a baby’s crib. A colorful mobile spun around. She remembered the pink unicorn. Her mother, held her hand as she danced as a child. Dad with his camera and cigarettes. He had that goofy beard up till he passed in 69.
Her husband Joe, lay next to her, right after they made love. The hospital bed where Charlie was born. 13 hours of labor. Her home in Deltona, right behind the fancy new Publix supermarket. Back yard barbecues, fireworks after endless days at Disney. She saw it all. Felt every emotion, every tear that fell, every smile that lifted her lips. Every angry word, every kind deed. It washed through her in a silent symphony. The music of her life. The first tumor, the endless MRI’s. Last Christmas with her grandchildren. Poor Mia kept asking for her.

And then the hospice bed. Two doctors, one turning the sheets down, the other twisting dials on a defibrillator. The pretty nurse unwrapped a large syringe.
Light filled the room in a silent white explosion. She couldn’t see anymore.

She sensed movement around her. Sounds of quiet conversation.
And the light!
It wasn’t just ordinary light. It was alive somehow. It got inside her. She never felt such peace.

Her eyes opened. The light was everywhere, became everything.
Joe smiled down at her. Behind him a small group assembled. She picked out her mother as she walked toward her. Dad laughed somewhere behind.
‘How was it Betsy?’ Joe asked.
She looked at him, he was young again. His eyes laughed.
‘How was what Joe?’ She reached up to hug him. He felt so good. Her heart leaped with joy.
‘Heaven silly. That's where you were all this time.'

Hope you guys enjoyed this one. Inspired by a convo with @legosnjoysticks and of course by the inimitable @rhondak.
Finish the story legos.
Hugs,
J.

This post has been chosen by Muxxybot for today's curation
post....*....you have earned a Muxxy buck Congratulations! This post has been upvoted from the communal account, @minnowsupport, by jhagi from the Minnow Support Project. It's a witness project run by aggroed, ausbitbank, teamsteem, theprophet0, and someguy123. The goal is to help Steemit grow by supporting Minnows and creating a social network. Please find us in the Peace, Abundance, and Liberty Network (PALnet) Discord Channel. It's a completely public and open space to all members of the Steemit community who voluntarily choose to be there.

Wow, I can't believe "A Scythe, a Girl and Grass" gave birth to such an amazing story!

Smiling. Glad you like. Larry's got some reapin' to do.
Laughing now. And my front lawn needs some work.

Hey Rhonda, happy you like the tale. I have a friend who's mother is going into hospice. Looks grim. And Legos got me talking about Larry the not so grim reaper (his day job is in landscaping) laughing... so naturally the two ideas came together. The lawn guy by day but the reaper by night. Looks like it could be a fun story.
J.

Saw this from @nexusfyre's resteem. Loved it. Definitely concerned that Larry is something else. Why was his presence only mentioned thrice recently to the nurse?

I'm working on it!

Grinning. Nope. Where was heaven?

On Earth.....
Where else can you take thoughts and turn them into reality?

Resteemed. My favorite part.."Lady you rode that sumbitch till it fell apart." I feel like that some days :D Jhagi, this piece is right up my alley. I love it! You captured the light well. Just how I remember it...

Nexy! Smiling. Happy you like the vignette. Legos got me brainstorming on discord. Lol. I like how you remember the light. Smiling.

Congratulations @jhagi.bhai! You have completed some achievement on Steemit and have been rewarded with new badge(s) :