Do you know what is meant by win-win and win-lose?

I'm writing an important (to me :-) ) article entitled The Governed Blockchain which of course (?) tries to explain why the EOS way, also the Steemit and Bitshares way, is best. But I'm blocked. 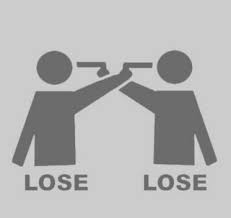 The explanation is all very well and logical and makes complete sense to me, but I know from deep, dark, bitter experience that the difference between win-win and win-lose is just ... opaque? voodoo? academic blather stuff, also known as BS? what salespersons and lawyers use in reverse? To my readers and other significant persons, this just makes them upset every time I bring it up. Unappreciated, we are.

So I'd like to try a little experiment. I want to ask TWO LITTLE QUESTIONS:

I lied about the number. Forgive me, but do you see where I am going here? It's entirely selfish. Maybe - just maybe - someone will provide me with the magic explanation to unlock the mystery of win-win versus win-lose!? Where science has failed, will community win out?

Or, it's a lost cause and I should just go back and hide in the library with all the other pontificators and flat-earthers.

A win win situation is where all parties involved benefit. A win lose situation is where different parties compete for a restricted set of benefits. Now with EOS, the main groups involved are block.one, investors, the block producers, application developers and users. All of these stand to benefit greatly if EOS is a success and each one is required. In fact EOS only really stands up if all parties benefit, and the design is focused on that. The delegated permissioned choice of block producers is a way to produce the speed and scalability needed by applications and free to user transactions for users. The only groups who could really try for a win-lose situation are block producers and/ or block.one. They could attempt to coordinate an attack on the system but this would be lose-lose as they need confidence in the win-win nature of the system to keep the price up and keep developers/users on the platform - they would effectively be slitting their own throats.

win-lose is the wall st. / fed / oligarch mantra we currently have

Technically it could be seen that way because a financial trade doesn't create value as which happens with the rest of society's work. So wall st etc can only present trades where one person wins and the other loses.

(It's actually a little worse than win-lose or a zero-sum game ... because the financial system also has to take a cut!)

win win, win lose!!!
win win situation means considering a given task faced by Mr A and Mr B, when at the end of the task the but of the are happy with there performance, this can be considered win win. But when Mr A is happy and Mr B is sad it is considered as win lose

If Tom takes an action by which he makes a gain while yielding a gain also to Dick, Tom's mark will fall in area I: Tom acted intelligently.

If Tom takes an action by which he makes a gain causing Dick a loss, Tom's mark will fall in area B: Tom acted as a bandit.

Win/Win situation - When an individual is involved in an event, while having 2 options, whichever he chooses, he profits from the outcome.

Win/Lose situation - When an individual is involved in an event, while having 2 options, one options leads to a profitable outcome, whereas the other one leads to a negative outcome.

*Profit is not strictly financial. Profit is everything that makes the individual feel good.

It is only applicable when there are two parties - the two terms apply to each different party. So a win-win is when you and I do a trade that creates a win for both of us; win-lose happens when one of us has to win and the other has to lose.

When I was writing first draft I actually had 2 parties there. At the end I had to disagree with myself and therefore with you. When speaking about win/win – win/lose situation, it has nothing to do with more parties committed, if not previously stated as a premise. Win/lose are strictly subjective matter. When an individual is met by an event, he estimates whether he profits from the event or not. He does not care about others at this point. Just because one wins or one loses, it doesn’t necessarily mean that it affects others in a way where they feel the positive or negative outcome of his actions. For all we know to the second party there could have a completely different win/win – win/lose ratio, therefore the outcome of individual n.1 would be neutral if it did not directly affect the individual n.2.
That’s just what I think/ how I understand the term.

I am poped up with a fun math example...
A couple sharing tasks. One split the tasks fairly, according to his thoughts, and the other takes any first.

All voluntary trades are win-win or they wouldn't happen. Each party subjectively views their post-trade position as better than their pre-trade position.

The only time someone can 'lose' is when they are not involved in the trade.

You can also have WIN-win situations where one side receives a much higher increase than the other party. For example, asking two people to divide $100 dollars could create a win-win situation with $99/1 or $50/50.

Win-win has a different connotation in engineering terms. It means that you have resolved apparently opposing goals by killing two birds with one stone. Everyone wins except the birds.

Laborers in the Vineyard - Matthew 20:1-16
20 “For the kingdom of heaven is like the owner of an estate who went out in the morning at dawn to hire workmen for his vineyard. 2 When he had agreed with the laborers for a [a]denarius for the day, he sent them into his vineyard. 3 And he went out about the third hour (9:00 a.m.) and saw others standing idle in the market place; 4 and he said to them, ‘You also go into the vineyard, and I will pay you whatever is right (an appropriate wage).’ And they went. 5 He went out about the sixth hour (noon) and the ninth hour (3:00 p.m.), and did the same thing. 6 And about the eleventh hour (5:00 p.m.) he went out and found others standing around, and he said to them, ‘Why have you been standing here idle all day?’ 7 They answered him, ‘Because no one hired us.’ He told them, ‘You go into the vineyard also.’ 8 “When evening came, the owner of the vineyard said to his manager, ‘Call the workers and pay them their wages, beginning with the last [to be hired] and ending with the first [to be hired].’ 9 Those who had been hired at the eleventh hour (5:00 p.m.) came and received a denarius each [a day’s wage]. 10 Now when the first [to be hired] came, they thought they would get more; but each of them also received a denarius. 11 When they received it, they protested and grumbled at the owner of the estate, 12 saying, ‘These men, who came last, worked [only] one hour, and yet you have made them equal [in wages] to us, who have carried [most of] the burden and [worked in] the scorching heat of the day.’ 13 But the owner of the estate replied to one of them, ‘Friend, I am doing you no injustice. Did you not agree with me for a denarius? 14 Take what belongs to you and go, but I choose to give to this last man [hired] the same as I give to you. 15 Am I not lawfully permitted to do what I choose with what is mine? Or is your eye envious because I am generous?’ 16 So those who are last [in this world] shall be first [in the world to come], and those who are first, last.” All the workers in my opinion had a win-win situation, but the grumblers had a win-lose time, none the less. Lesson? Be grateful for whatever God grants you.