Who wants to join in? Attention all singers, rappers, and those who just like to have fun! The SBD from this post is on the line!

Round 4 of Season 9 of my WILD & STRANGE Contest has officially ended! It’s time to grab the mic and rock it for a chance to win some SBD! The grand prize for this round will be the SBD portion of the payout from this post. Who is in?

Here is the progression that this contest follows.

ROUND 1 = PHOTO – Take a photo to enter – COMPLETED

ROUND 5 = SONG – Use winning poem from Round 4 to make an original song. - STARTING NOW In Round 1, @chrisroberts won the photo contest with this interesting entry! It was his winning photo that provided the inspiration for the artwork in Round 2. This winning artwork from @saleg25 was the base for the MEME contest in Round 3. Congratulations @saleg25! 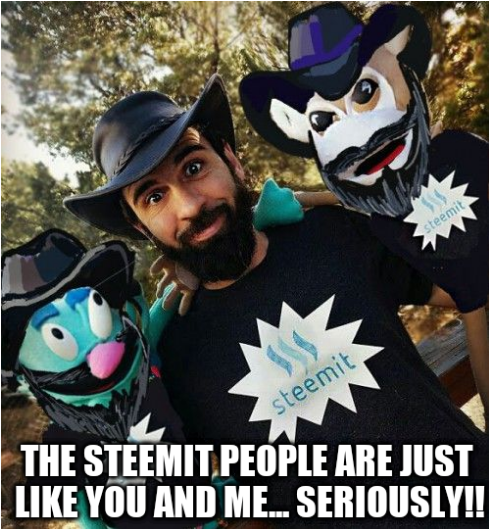 In Round 3 @lolicorn took the meme contest with this entry, which inspired all of the poems entered in Round 4!

So, what poem from Round 4 will we have to make a song for Round 5?

A man and his mustache went out for a ride
Hoping adventure and fortune to find.
He roamed the web that they say is world wide,
Found steemit and loved all that it could provide.

He met all sort of folks as he chatted and surfed,
Made friends with them all, human, beastie and smurf.
He voted and resteemed what he felt had worth
Whether it educated or just brought him mirth.

It soon became clear that 2 steemian friends
We very like minded, they sought the same ends.
They'd speak truth to each other and never offend
All misunderstands so quickly would mend.

The three steem amigos decided to meet
In the real world for a handshake and greet.
When their mustaches met they all had to agree
This steemian friendship was destined to be.

So when you are sitting there surfing the net
Remember this one thing, don't ever forget.
On steemit you earn everything that you get
Crypto, information, and friends (some puppet.)

It was as tough as always to pick a winner, but I had to do it. A few others were very close to being crowned the winner. In the end I felt that this one from @fishyculture would work best for the song contest, so I hope that I'm right!

A big thanks to everyone who entered last round. That was a fantastic bunch of poetry to sort through!

Here are the rules for Round 5:

Singers, songwriters, and rappers out there, now is your chance to have some fun, show off your skills, and possibly earn some SBD in the process!

The winner from this round will be awarded the SBD from this post payout, and I’m looking forward to your entries.

Here is my entry! Just in time, phew!

Thanks for a hilarious contest! It's been fun!

LOL! That made my day, my week, my month! I have written many silly tunes, never had one performed by a competent musician... complete with doo-wop girl!

Lol! I'm mostly there to set the scene. 😁

LOL, that brings back some good memories. Would you say that I have a plethora of pinatas?

Awe, so COOL!!!!
I am so honored, so glad that I finally "got to know" you papa-pepper!! Your silliness has become a highlight of my daily life, and it is so well tempered with common sense. You make me miss Arkansas!

I am glad that you think my silliness is coupled well with common sense.

Great job on that poem and prepare to hit in a variety of songs in the near future. It's nice to see you guys participating in these things, and I'm glad that I brighten up your day.

heyy PAPA .. i will like make you a personal GIF...

can we talk about it by steemit chat?

😍A very informative post. Great job. Keep it up! 😍

Just in the knick of time...


A few technical difficulties.Trying to channel a Cash vibe, were he raised by gypsies.
$0.00
1 vote
Reply
[-]
fishyculture (60) 5 years ago

Oh I am SO glad I do not have to judge, you guys are awesome, and is is SO much fun hearing someone perform something I wrote. I feel like I won a Grammy lol!

Your poem is fantastic. Very easy to write music to. Thank you!

pls can i partake on it, when is it ending

Midnight Sunday is the cuttoff! You have many more days! Partake of the goodness!

Thanks for being helpful!

Now again you came with the new series and thus I will try to participate in these even .

Any nature photography contest ? for that i have this beautiful pic :) <3 Combination photography week 11 starts in an arbitrary amount of time after the week 10 decision!

LOL - SO helpful my friend!

Now this time I never gonna miss this opportunity and I will definitely participate in singing . Sir I will rock😁😁😁😁😁😀🤣😃 your show

I'm on it tonight when I get home!

I'm going to try and get it done tomorrow before I hit the road for a show...
I got busy yesterday.

Just letting you know that I cannot participate as my singing is atrocious! Even in grade one I had to sit one side when the class sang songs. So sorry but the next competition I am in!!

Well if I started singing, for sure you and all the contestants will go faint, so this is why I don't want to sing :D

Great poem, choosing is hard, thats why we let you do it Papa!

Im struggling on the last line, but I'll get an entry in for this!

if i sing, i guess i will destroy the world by my voice :D

Your contests (just like your posts) are unique, interesting and inventive. As I care about different ways of promoting steem/steemit to people that haven't heard of it yet and as I can make some simple but nice looking animated promo videos, I though of the idea of making custom videos to promote specific steem contests as a different angle to introducing people to this wonderful platform. And I'm ready to do this for anybody that's running a contest and I'd be more than honored to try and make you a video (or more) you'd be willing to use to promote your own wild and strange contests here. Here's my post with the offer - click

Here's a video I've made for a soccer prediction contest, but I can hopefully revamp it to fit what you are doing too:

All lyrics, in order. You can add but never subtract!

We multiply efforts and avoid division.

Don't get me started on prime factorization!

OK, so this is really bad... It is the fastest I have ever tried to write and perform anything... If I really thought 2 more days would polish it up, I would not subject this lovely community to this... lol! Truth is, I have grandkids coming, this is as good as it is gonna get. Enjoy! Or, um... try not to throw tomatoes at your computer, they won't hit me. :)

Here is my submission for this week's song competition.. it kind of has a "country" vibe.
https://steemit.com/wildnstrange/@drewley/wild-and-strange-song-contest-three-steem-amigos

Reviewing a few of the past rounds of Wild n Strange, I think I now understand what you mean by 'Make a Song' (ie not just singing the poem, but actually MAKING A SONG - yes I am dense). I have downloaded a new program, and have been fiddling with it - such is my schedule that I don't think I will get an entry in this time around - but Steemit has once again led me down the path of learning new skills and opening my self up to new challenges. Can't wait for the Arbitrary beginning of Round 10!

By Midnight Sunday, does that mean it's over, or until midnight tonight? Really hoping for the latter. I've been crafting. :D

You just made my day. Brilliant contest. I thoroughly enjoy your creativity, and your ability to draw it from this incredible community. Live performances are okay, right? My brain wants to arrange music, but time is scarce! :D

It's uploading! It's amazing! It'll knock your socks off!

Lets see what you have

Oh yeah this is fun I can't wait to see you what they come up with, or hear who comes up with something I'm not really going to participate but it's interesting to see anyway thanks for having these cool interesting games or contest whatever you call him and I guess good luck to the winner, so this is pretty cool enjoy guys, be well.