Repost: Fearless Adversarial Journalism Doesn’t Work When You Are Funded By A Billionaire

elizbethleavos (64)in #wikileaks • 3 years ago (edited) 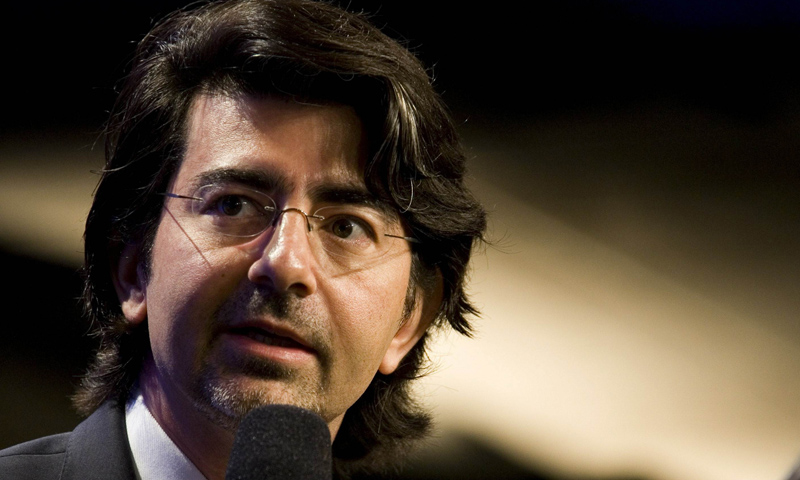 Disobedient Media previously opined on the dagger-in-the-back publication of a hit piece against Wikileaks' Julian Assange just one day after a UK magistrate, with blatant conflict of interest in the matter, shot down his legal representatives' attempt to finally free him from the confines of the Ecuadorian embassy.

What that article did not address was the patently obvious terminal illness suffered by The Intercept. That is, the outlet claims to publish "fearless, adversarial" reporting, while it is funded by a billionaire. Ken Silverstein, formerly employed at The Intercept and by Omidyar's First Look Media, has described endemic problems at the outlet that have risen directly out of Omidyar's leadership or lack thereof.

The fundamental problem facing The Intercept is not ultimately about how or why the outlet published a smear specifically timed to cut support away from Assange, even though that is in and of itself despicable. It's that doing so acts in support of the very deep state and moneyed, military interests that The Intercept purports to critique "fearlessly."

Adding to a sense of betrayal of The Intercept's principles in the wake of the outlet's hit-piece is the fact that a number of writers at the publication are by all accounts on good terms with Assange, and have worked with mutual supporters including the superb Italian journalist Stefania Maurizi. Maurizi collaborated with Wikileaks on the verification of documents for many years, and worked with Glenn Greenwald on preparation for the disclosure of the Snowden files.

Adding to the years of support Greenwald has shown Assange, the Wikileaks co-founder also sent Wikileaks' own Sarah Harrison to the aid of Snowden after he was marooned in Hong Kong in 2013, an act which Stefania Maurizi revealed very likely cost the publisher his freedom.

After the publication of the Snowden files, the UK ceased any attempt to create a legal process by which Assange might have been safely freed, and in the same year pressured Sweden to continue its investigation after the country's authorities expressed their intent to drop the matter. Likewise, in the wake of Assange's actions towards Snowden, the Obama White House changed its stance from a reluctant acceptance that prosecution of WikiLeaks for publishing might not be possible given that US publishers had also published the same material.

Snowden's revelations also provided much of the impetus for the launch of The Intercept as an outlet, after Glenn Greenwald departed from The Guardian. In this way, Assange's story and his fate in the Ecuadorian embassy is inextricably linked with the origin of The Intercept's rise on the back of the Snowden revelations.

Only a few months later, in October 2013 while Snowden was still stuck in a Moscow airport and out of reach of US authorities and The Intercept was gearing up for launch, the UK made it clear to the Swedish prosecutor that she should not drop her investigation and European Arrest Warrant for Assange, even though Sweden's law on proportionality required her to do so.

In the wake of Snowden's escape to Russia, Assange remained trapped in 30 square meters of an embassy and lost any hope that had existed earlier in 2013 that he would soon be released from that space, where we now know he cannot receive even the most basic medical care. Meanwhile, The Intercept has become what it set out to destroy.

The relationship between Assange and The intercept makes it impossible to see the organization's publication of an intrinsically flawed smear piece aimed at Assange as anything other than a deep betrayal.

Which brings us inevitably to Pierre Omidyar. That the multi-billionaire Ebay founder despises Trump and would have preferred former Secretary of State Hillary Clinton to assume the mantle of the Presidency is an understatement, but to focus only on his political outlook also misses the point of the larger issue facing The Intercept. The billionaire's incoherent vision of the First Amendment (disturbing for someone who funds journalistic endeavors) aside, the nature of The Intercept's fatal catch-22 would remain if Omidyar woke up tomorrow to become a MAGA-hat wearing, NRA-supporting conservative. That is, a media outlet cannot perform as an 'independent and adversarial' entity when it is birthed within and nurtured by the very establishment it must confront.

When USA Today reported that Omidyar would contribute $250 million to pursue "independent journalism," a genetic malfunction was written into the Intercept's DNA. One cannot operate in an adversarial manner when one is supported directly by the same moneyed interests that require the most scrutiny and transparency of all.

That the magnate's influence would seep, tide-like, into the reporting and editorial decisions of The Intercept seems difficult to ignore, but it is that inevitable creep itself and not the flavor of his beliefs which makes the situation so damning for The Intercept.

I've previously written at length in an effort to describe the chilling uniformity that ultimately pervades the plutocratic class. Being a billionaire makes Pierre Omidyar much more like one of the Koch Brothers than any liberal without access to the same magnitude of wealth and influence in the US political sphere. The fact that wealth translates to political influence was described in a Princeton University study, indicating that the United States operates as a plutocracy. In that light, it is the wealth that binds Omidyar, the Kochs and their ilk, as opposed to political outlook.

When Omidyar made use of Citizens' United to supply an anti-Trump super PAC with $100,000 in 2016, it's not the flavor of the political activism that he bought - it's that he bought it at all. Omidyar is a power-player within the same corrupt establishment that WikiLeaks and The Intercept - in principle - aim to critique regularly.

Omidyar has also provided funds to the Clinton Foundation. As indicated by Wikileaks via Twitter, the Freedom Of The Press Foundation recently made the controversial decision to terminate processing of Wikileaks donations. The move represented an end to the role that was a central cause for the Foundation's creation, according to a statement by Assange.

Ironically, the initial financial blockade that made the Freedom Of The Press necessary was in part initiated by Paypal, which was a spin-off from Ebay, a company that Omidyar founded. Omidyar served on the board of the company until last year.

Wikileaks Tweeted on the subject: 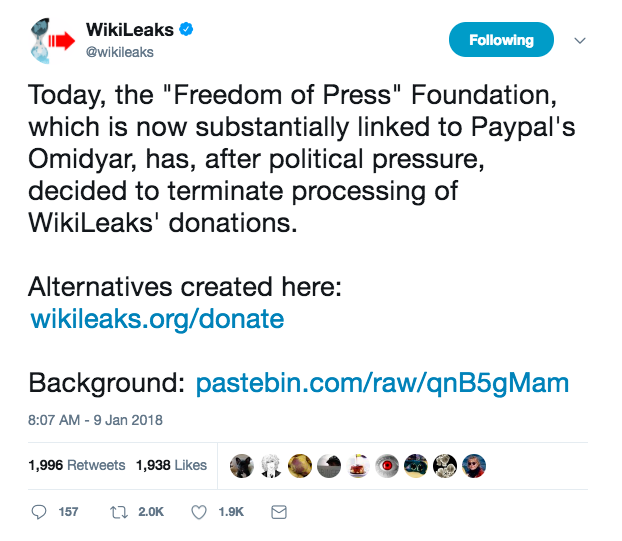 Sarah Harisson expressed the conflict of interest that Omidyar's involvement with The Intercept represents to German Press, saying: " How can you take something seriously when the person behind this platform went along with the financial boycott against WikiLeaks?"

Here lies the gulf between an adversarial organization like WikiLeaks and a news outlet that purports to be fearless while subsisting on the payroll of a member of the plutocratic elite.

The issue here goes beyond Omidyar's politics and the petty, obsessively personal derangement of The Intercept's Micah Lee towards Julian Assange. The crux of the terminal illness suffered by The Intercept is that it cannot stand as an outlet that wishes to both participate in adversarial, anti-establishment reporting while it also relies on the funds of a billionaire - any billionaire.

The rough beast born of the marriage between Omidyar's funds and the yearning for freedom that surrounded the release of the Snowden Files cannot help but spiral towards its inevitable fate.

At The Intercept, the center cannot hold in the widening gyre between its best journalists and its worst impulses.

Pierre - what a complicated web you weave.

Curated for #informationwar (by @stevescoins)
Relevance: sources of fake news
Our Purpose

Excellent piece @elizabethleavos. This is the same reason mainstream media can't critique the establishment in any meaningful way: source funding. Highlights the importance of independent journalists such as yourself, Suzie Dawson and others.

Thank you so very much!

This was always going to be the result. When you have people (Omidyar) who are working 'with' a system that is rotten to the core, they are only there to prop up and perpetuate the cause of the ruling classes. The writing was on the wall from the beginning. The opinions and views of the journalists are irrelevant to Omidyar. He only cares about building a brand name and influence. When you work for an organisation that has an agenda (whether hidden or not), the journalists will be compromised into a position whether they like, or agree with it or not. You cannot be independent while working for a plutocrat, who believes in the top/down model of compartmentalisation.

It's true, and it's sad, (I mean genuinely disheartening) that the Intercept was born with this type of defect in its makeup because I do think individuals there including Greenwald are legitimate.

This is the best summup of the situation as I see it, [cliche advisory warning]: Can't quote Yeats without one! But those last two lines summup everything wrong with The Intercept right now.

Quite a lucid essay on the disease that infests the 'free press'.

The only quibble I have is this.

This is factually incorrect, as Paypal was purchased by Ebay after it was independently created.

Otherwise, the essay is spot on.