How NOT to use voting bots

If you've followed some of my posts then it's not a secret that I've been using voting bots to promote my work.

I know that some people don't like it because they think that's unfair to those really great articles that get posted every day and receive no attention (and no rewards). And I understand that there are some abusers to this system that publish spam posts, a simple picture with no text o a two lines paragraph over and over again and pay the bots to get paid. That is something I don't want tosee either.

But I think that anyone who puts the effort to publish something that it's worth at least a few minutes of your/my attention, who reads the news, who makes questions, who tries to help us clear any doubts about this platform or any other, has all the right to promote his/her posts to get them to be seen for as many people as it's possible.

Every product in this world, no matter how good it is, has to make an effort in trying to find it's market. Voting bots are just one way to do it.

And then, if this is the way you're going to use to promote your posts you should know that it can be really effective... if donde the right way. Otherwise you might be just burning money.

First of all you must make an effort in posting something that is worthwhile. Something that might appeal to someone with an interest in a particular subject or to a wide audience, it doesn't matter. Wasting somebody else's time, no matter how much you invest into promote it, it will eventually get you flagged and lose all your rewards. Just don't.

After making sure that you (in all honesty) have something to share with the rest of this community and post it, It comes the time to use the bots to promote it. You can use https://steembottracker.com/ for that.

And here comes the tricky part.

I've noticed that many people seem to be using it but have no clue of how this works. You should know that bots are classified in three different groups:

For promotion services and other bots, you simply are shown the information of how much SBD is their vote value, how much is the minimum accepted payment and a little description of how their services work.

For the bid-based bots, you will be shown this screen: You should acknowledge that although you are doing this to promote your post, you want to receive enough rewards to at least recover what you've invested so that once you claim your rewards you can promote your new posts the same way you did before.

To do that you must consider that up to 25% of your rewards (the amount shown at the bottom of every post you make, right beside the number of upvotes received) will be given to curators, not to you. So whenever you see the vote value on the details window, you must take 25% off of that. Then, you should know that you will be getting only half of that SBD payment and the rest will be given to you in STEEM power (not 1:1, more like 1 SBD: 0.25 STEEM power), so you'll end up receiving less than half of the value shown at the bottom of your post.

Now considering this, you must watch for "Total Bids" on the bid-based bots screen and send your bids only to those bots in which "Total Bids" (including YOUR bid) is less than half of "Vote Value", so you don't end up like this: 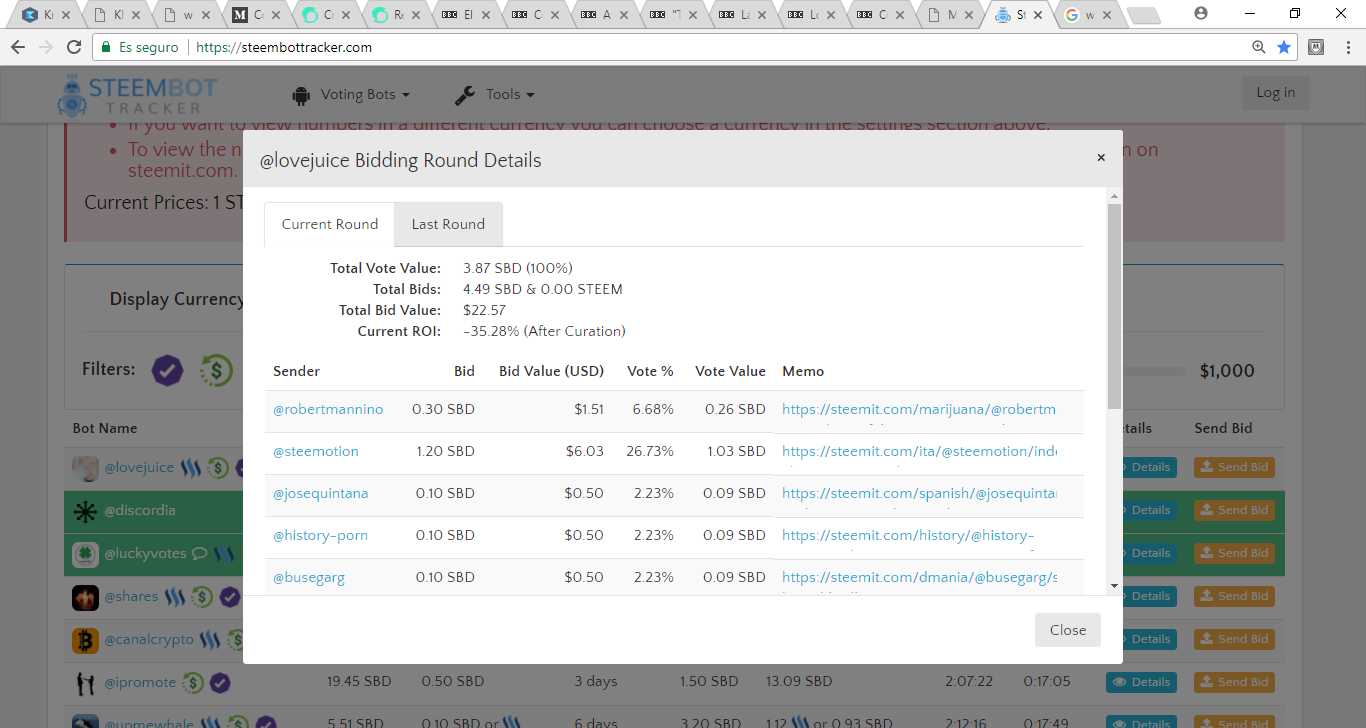 Receiving votes that are worth less than your investment.

This way you won't make yourself and other previous bidders lose money.

Thanks on this..automated bot reply :)

Hi,
Nice to read about you and you posts and views. I am into steemit from august 2017, I am interested in photography and I am also into crypto trading and investing,I have followed you so you can also follow me. Let us all join hand and work with one common objective to make steemit reach to great height.
Best Of luck
Teenovision

In short.I should expect at least double of what I spend as a bid to the bot to make sure that I'm in profit right.

That's right, even more than double to make sure

Any recommended list of bots which are beneficial currently ? minnowbooster approximately gives an up-vote 3 times its bid value. I got $0.32 for a bid of 0.12. Hope that's beneficial.

Exactly. So I might have received my SBD in return but received some free steem.

Right and create value for the curators!

Those listed as promotion services and other bots at steembottracker.com seem to be more profitable right now. Otherwise, you could just wait until the last minute to submit your bid to those bots that reach there with a positive ROI

Is there one you can recommend please? I used one @treeplanter because I liked the cause but his voting strength is still limited. I enjoy your content BY THE WAY! Thanks

The problem is not enough people know that you have to watch the ROI carefully and also not to bid over the amount suggested. I also have noticed that there seems to be a last second rush on the profitable bots that quickly go negative right at or just after the clock hits zero. I also find it weird that the countdown timer will go up in time when the round is showing profit and only after it goes negative will it close out. Can anyone explain this to me please. I am using this technique to both market my work and create value for the curators. It seems like a win/win for the community and a great way to invest into the platform rather than just converting to steam power which really only helps me.

I've been looking into potentially using voting bots, but I wasn't understanding how they worked. This has bit helpful. Thank you!

This is very helpful! I would love to see more about bots and how they work because as a new account here I am not sure of how to get exposure to a bigger audience

Ah Yes. These things I have learned over the past couple of weeks. They have been very hard to use profitably lately. I take my content seriously and am just doing the best I can to get it out to the people who would appreciate it. Unfortunately, no system is perfect and Steemit has some large disparities in rewards that hopefully can overcome with hard work combined with other tools available located on Steemtools.com and include but are not limited to:

This is also my second account so that I could focus on Cannabis, my reason being that I wanted to keep my content more consistent and relevant as my @iwanttruth account focuses more on the esoteric, political, and psychological. Would be curious to hear peoples thoughts on these suggestions, especially splitting the accounts.

definitely I agree. Focusing on one theme in your account will definitely help.

Thanks for the input! Since I am a DJ about to migrate my collection over I think I'm going to have to make ONE MORE, blahh. It's going to be quite the uphill battle to build three accounts from nothing but I'm into Steemit for the long haul. Let's keep it moving and save people from the Facebook Google world government lol.

Right. Someone can have an account used for dmania, dtube, memes and all low quality content which still earns some hefty up-votes from bots. We do enjoy some good quality humor occasionally.

I don't know which bot to use there are so many speculations about it especially right now.. I saw some arguing about it and some even blame each other its just like a war between a bot and their programmer I hope the steemit board gives more guide on it. Sorry I know nothing but still love to post my articles and Thanks

I just started trying to use the bots and I did feel a little guilty about it, happy to see other more established people using them. I noticed that some of the bots are actually being bid higher than they are paying out. Is that because someone comes in last minute with a huge bid? Or do people not know that they are spending more than they will earn? This is defintely a great write up, and I’m going to send it to my sister who just started here!

Just post good content, and you shouldn't feel guilty about it. Unfortunately this is pretty much the same across the board, as a marketer by trade (and hopefully not much longer) this is a shitty reality one must accept. I make much less money than I could be because I quit working with the fucking machine and instead opted for only helping small businesses that I believe in. For small business its such an uphill battle and its all about finding how to spend the least on marketing, but having zero dollars for marketing is going to be extremely difficult.

Yeah I think people don't understand how they work AND I think loads of people wait until the end and rush to place a bid. I've seen that happen so many times. I am new here and want to participate fully into the platform. I am attempting to create value with original posts that hopefully add value to peoples life and i want to add value with my dollars. To me a voting bot creates value by putting money onto the platform as a investment in myself and work which moves the money through the system and gives me back a little interest in return. But it also entices people to curate and actually interact with me. A person is naturally going to look for the posts with number higher than a penny. In this way its no different than having a catchy title and cute picture. Hope this helps!

Fools dont know how to use bid bots

It will make your post visible to more people so yes, it will increase heavily the chances of manual curation coming from many more users

I believe it's creating value in the 25% portion for curation. So people would be more likely to comment the they see there is a reward attached.

This post has received a 8.00% upvote from @lovejuice thanks to @johanalejo. They love you, so does Aggroed. Please be sure to vote for Witnesses at https://steemit.com/~witnesses.

This post has received a 50.00 % upvote from @chronocrypto thanks to: @johanalejo.

This very nice post.. i appreciate your crytocurrency news thanks for sharing... Best of luck..

You got a 44.25% upvote from @ipromote courtesy of @johanalejo!
If you believe this post is spam or abuse, please report it to our Discord #abuse channel.

Awesome. Thank you for this. Keep it up bud

@masterbot has been called by @johanalejo to give you 16.50% upvote!
Check this post for information about delegation. Make me strong!

Thanks for this just followed you 👍⚡♨️

Learning about Steemit is like having a second job at present. It is certainly worth the time learning about it. I came across this post at random. This has certainly given me some very useful information.