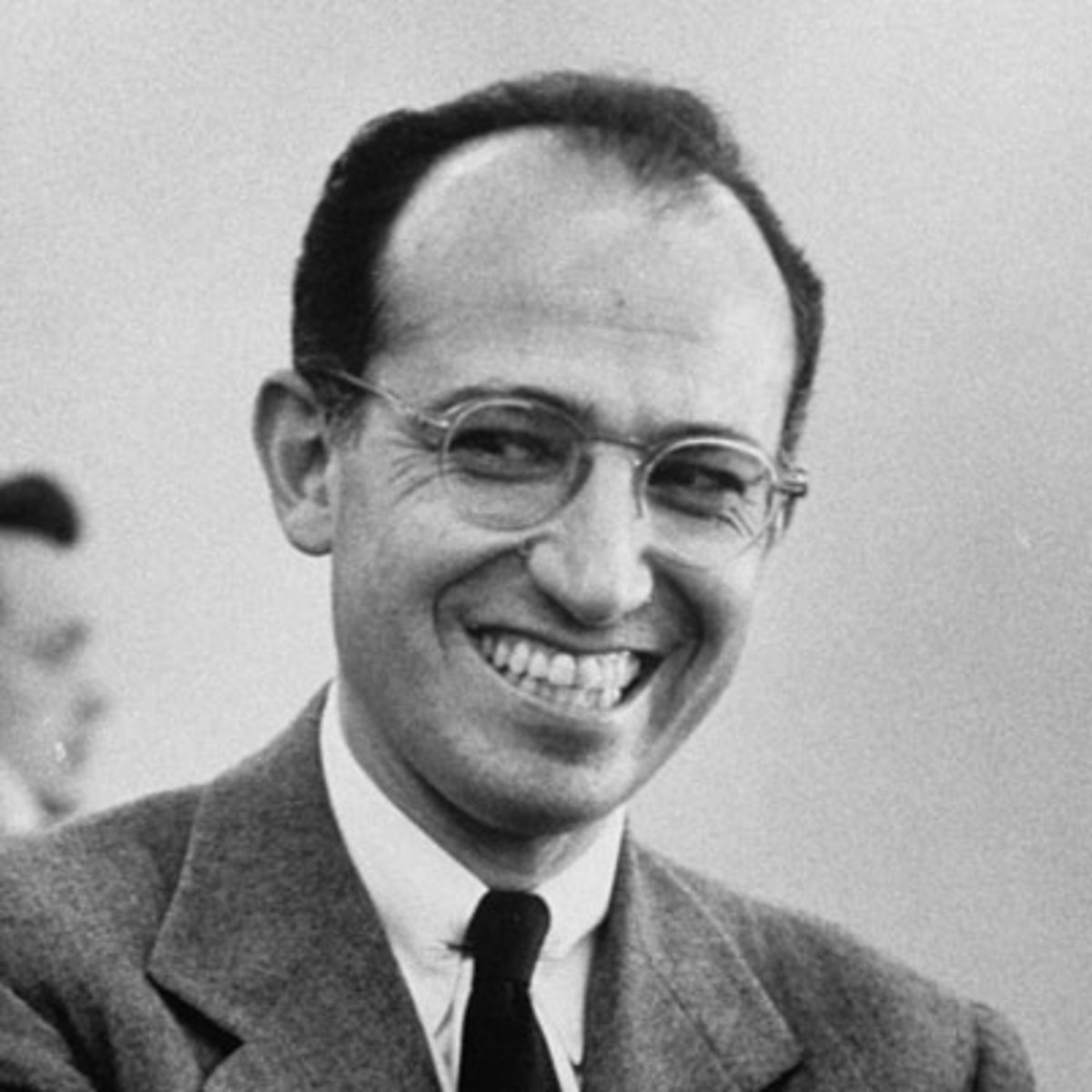 Anyone alive during the 1950's remembers the hysteria surrounding the polio scare- the "plague" of the mid-20th Century. Almost everyone alive at that time knew at least one person struck down by this terrible disease. It began with flu-like symptoms and soon turned into something much darker. When Jonas Salk discovered a cure he was hailed as a conquering hero. However, it seems that Salk's vaccine hid something much more deleterious- mutated cancer causing cells called Polynoma. A research scientist from the National Institutes of Health (NIH) named Bernice Eddy warned that the cells from Rhesus monkeys used in the research contained Simian Virus 40 (SV-40) a carcinogenic mutation. Later research shows that an entire generation of children, if not more, may be affected and the current outbreaks of various cancers we are now witnessing may also be attributable to SV-40 exposure.

If you turned on a TV in the 1990's you couldn't miss seeing ads about lawsuits for Mesothelioma. This is one of the cancers directly caused by the SV-40 virus, although at the time it was linked to exposure to asbestos. Makes one wonder how many businesses were sued for cancers they didn't cause (the settlements totaled in billions of dollars). This is only one of many cancers linked to the vaccines as well.

Bernice Eddy's warnings not only went unheeded, she was called an "alarmist" and pulled off the project and transferred to cancer research. One reason may be the mounting pressure to find a cure because of the hysteria caused by the press which had reached fever pitch. The vaccine was rushed through the FDA's approval process in spite of Dr. Eddy's pleas to hold off until more research could be done. The SV-40 virus is also present in the Sabin oral vaccine. While working on cancer research, she became friends with Sarah Stewart and it was these two women that discovered the mutated Polynoma cancer cells. This was confirmed in a 2007 book by Dr. Mary Sherman, an orthopedic surgeon and cancer researcher at Tulane University. Dr. Stewart died mysteriously of a stab wound to the chest, the crime is still "under investigation." It was while working in concert with Dr. Stewart that Dr. Eddy, as well as Dr. Sherman, found conclusive proof that an entire generation had been exposed to vaccines tainted with carcinogens. The vaccines (Sabin) is still in use.
These courageous women who nobody even knows about deserve our undying thanks for exposing this travesty- they are both heroes. (See links)

In 1972 Salk wrote a book- The Survival of the Wisest. As it turns out, Salk was a Darwinist who also believed in Eugenics. In other words. he was one of the pioneers in the population control crowd. At the risk of sounding like a conspiracy theorist, it may be that the carcinogenic SV-40 wasn't in the vaccines by accident. After all they knew the ramifications. I may not be a biochemist, but I can see some unsettling similarities... Ebola and AIDS all come from mutated proteins in monkey cells.

Dr. Salk made this statement in Science magazine:

“The live polio virus vaccine has been the predominant cause of domestically arising cases of paralytic poliomyelitis in the United States since 1972. To avoid the occurrence of such cases, it would be necessary to discontinue the routine use of live polio vaccine.”—Dr. Jonas Salk, Science, April 4, 1977.

I'm not surprised... they rushed it through the approval process completely ignoring any possible ramifications largely because of the manufactured hysteria created by the MSM.

Funny to think cow pus prevented small pox lol, like pimple pus prevents pimples . Pimples do not cause themselves. Bad eating habits most likely cause pimples.
Cause and effect big difference

So this is how the con-game works. They make an animal sick in the lab. They take the infection which they call virus and inject that into another animal. If the animal survives, they claim the poison infection that they injected is the reason for survival. And if the animal dies they blame the animal.
This laboratory madness has NOTHING to do with the cause of NATURAL disease.

Thanks my friend... It's weird I watched a video not long ago about how AIDS was created at the lab at Ft. Detrick MD and they mentioned the SV-40 in that, but I never made any connection until I read one of the posts I linked.

Once you start pulling the thread...Top stuff matey, keep it coming.

In 1977, a secret federal virus program produced 15,000 gallons of AIDS. The record reveals the United States was represented by Dr. Robert Gallo and the USSR was represented by Dr. Novakhatsky of the diabolical Ivanosky Institute. On August 21, 1999, the world first saw the flowchart of the plot to thin the Black Population.

The 1971 AIDS flowchart coordinates over 20,000 scientific papers and fifteen years of progress reports of a secret federal virus development program. The epidemiology of AIDS is an identical match to the "research logic" identified in the five section foldout. The flowchart is page 61 of Progress Report #8 (1971) of the Special Virus program of the United States of America. We today, challenge world scientists to discussion of this document find.

"The 1971 flowchart makes it perfectly clear, the design, intent and purpose of the U.S. Special Virus program. As Dr. Peter Piot, Executive Director of UNAIDS says, 'The HIV/AIDS virus is the result of many steps in the laboratory, it was no accident.' The 1971 flowchart provides absolute evidence of the United States' intent to kill its own citizens and others... We are greater than any federal virus program. We are the human race!"
Dr. Boyd E. Graves Sept. 28, 2002

AIDS is
A Virus, it is a man made creation, It had Clinical Trials in April 2007 in Africa
Did AIDS exist prior to 1983
State Origin: The Evidence of the Laboratory Birth of AIDS. By Boyd Ed Graves, J.D.

In 1988 the Committee to Restore the Constitution documented the gene splicing work done at Ft. Detrick, Maryland (now NIH) uncovered by Dr. Theodore Steckler. By splicing sheep visna virus and bovine leukemia with human tissue they created a retro virus we now call AIDS. A retro virus is a virus that mutates, AIDS mutates very rapidly, from one host to the next.
The World Health Organization (a United Nations organization) vaccinated people in Haiti, Brazil, & Central Africa with smallpox vaccine that contained AIDS. Drs. Robert Gallo & Luc Montagnier put out the CIA cover story about a green monkey biting a native on the rear starting AIDS. AIDS does not exist naturally in any animal. The green monkey’ s kidney is used to cultivate the smallpox vaccine. This monkey would have had to be a jet pilot to have started this disease in three countries at the same time.
On May 11,1987 the front page of the London Times reported “smallpox vaccine triggers AIDS virus” WHO (the World Health Organization) murdered Africa, they immunized the people with its new weapon, AIDS. WHO conducted the most intense immunization program in it’s history against small pox and on the tail end of this program to eradicate small pox they used this new weapon, vaccinating millions with AIDS. The figures of vaccinations with AIDS in Africa are as follows; 36,878,000 Zaire; 19,060,000 Zambia; 14,972,000 Tanzania; 11,616,000 Uganda; 8,118,000 Malawai; 3,382,000 Ruanda; 3,274,000 Buruni. 14,000 Haitians on United Nations secondment in Central Africa prior to their return to Haiti. Let us not forget the WHO executive Board for 1980 Chairman: Dr. A.M. Abdulhadi (Libyan Arab Jamahiriya) Vice Chairmen: Dr. Dora Galego Pimentel (Cuba) Dr. Shwe Tin (Burma) Professor I. Dogramaci (Turkey) Rapporteurs Dr. Adeline W. Patterson (Jamaica) Dr. D. Barakamfitiye (Burundi).
AIDS was then injected into the US, in New York about two Years later in Hepatitis B vaccine. Due to regular of the occurrence of hepatitis B in the homosexual community because of sodomy, they lined up for their shots and spread it in America.
In 1994 Bryan Elison and Co-author Dr. Peter Duesberg of the University of California had their book “ Why We Will Never Win the War on AIDS” censored, bought out and banned by elements within the US government. Because these AIDS researchers uncovered yet another lie. HIV does not cause AIDS! There are over 5000 case studies of people with full blown AIDS that never had HIV. HIV is like other harmless viruses after your body produces antibodies that kill it, it can be found in your limp glands (dead). Now here is the truth about HIV. If left alone it does nothing, but when diagnosed the medical community recommends ( at the recommendation of CDC) treatment with the “AIDS cocktail”. This cocktail contains a toxic failed cancer chemotherapy AZT. Which causes anemia, bone marrow loss, muscle wasting, virtually destroying your immune system and mimicking AIDS and killing you.

Curated for #informationwar (by @openparadigm)
Relevance:You can tell by the common "talking points" of vaccine supporters that there is an informationwar campaign afoot.

Learn somethin' new everyday! I still believe though that what you put in your mouth "allows and harbors" ALL dis-ease. When the sewer system of the body is backed up like someone standing in their home with shAt up to their ears all the bad things are present to emerge and in great numbers. When the pipes are clean cause the sewage is being taken out the immune system is like Superman and all things pass right through one..........

The problem is that the vaccine kills the system that keeps the pipes clean! The mutated viruses are among those that attack the immune system... specifically T-cells that fight cancer.

Oh I agree with you. Not for them myself. Can't talk to one's for them at all. I always say "why are you so worried about me? You barely know me. You're safe right cause you've been vaxxed............" They can't say anything intelligent back after that.......

The only way to eradicate paralytic poliomyelitis is to STOP VACCINATING

GUESS WHAT IS IN THE POLIO VACCINE???

Neomycin, streptomycin, and polymyxin B

Hey @richq11. I am trying my best to find an affordable copy or pdf of Jonas Salk's books. I cannot get a copy of "The Survival of the Wisest" unless I fork out 160+ dollars. It's 126 pages and I don't have that kind of money to throw around. Do you have any suggestions?

Funny, how someone's "important" contribution to vaccines is so hard to locate. Even Archive.org has it set to private mode so I cannot download a free copy.

I guess I will need to save my pennies.

I got mine here, but they're temporarily out of stock. They do have a good selection of his other stuff, not to mention it's a good place to buy books of all sorts... It's my first choice for books.