Doctor and CDC employee who suggested that the flu shot caused the flu outbreak goes missing. 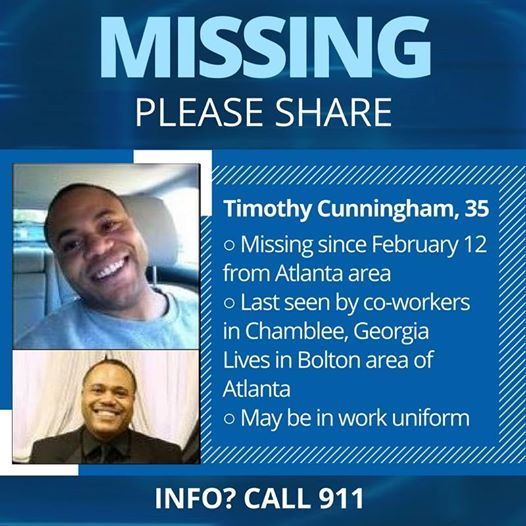 Dr. Timothy J. Cunningham, a team lead with CDC’s Division of Population Health left his place of work on the 12th of February after complaining of feeling ill, and has not been seen since. This could have been filed away with the tens of thousands of other missing person cases in the United States but this one is different.

What makes this disappearance suspect is the fact that Dr Cunningham made some comments that were published in January in YourNewsWire, saying that he suspected that the 2018 flu vaccine being administered to citizens of the United States was responsible for the flu outbreak it was supposed to prevent.

What makes me even more suspicious is the fact that Dr Cunningham was also deployed by the CDC to work on the Ebola and Zika crises in previous years. I think the Zika virus was used to cover up the fact that TDAP vaccinations given to woman in Brazil were the real cause of the babies being born with encephalopathy, and when you look a bit more closely at the Zika virus you will find that not only has it been known about and documented since the 1950's but prior to the 'Zika outbreak' in Brazil it had never been known to cause birth defects in the children of mothers affected in any documented case (and there are many)

Anyway, back to the original story. Dr Cunningham was concerned that patients being given the flu vaccine were dying and said,

“Some of the patients I’ve administered the flu shot to this year have died, I don’t care who you are, this scares the crap out of me.”

“We have seen people dying across the country of the flu, and one thing nearly all of them have in common is they got the flu shot,”

Family members close to Dr Cunningham say that there is no way he would have chosen to 'disappear' without at least informing his family and when this is added to the fact that when he spoke to YourNewsWire he said that if he was linked to the comments he would lose his job or suffer an even worse fate.

Dr Cunningham is one of many doctors (many holistic) who have either gone missing or committed suicide after trying to expose the dangers of vaccines (there is a list of 60 in this article alone), or how treatments for conditions such as cancer are being hidden so big pharma continues to profit from the misery of others.

As more and more people wake up to the reality that we are being lied to on a massive scale I expect we will see more disappearances/deaths and suicides of those brave enough to come forward to try to help humanity.

It's been over two weeks now since Dr Cunningham disappeared with no sign that he is going to reappear any time soon. I hope for the sake of his family that he is alive somewhere but if I'm honest I don't have too much hope. Perhaps we will be told that he committed suicide in some bizarre way as we were with Terrence Yeakey after he discovered something strange about the Oklahoma City Bombing

Desite my pessimism I hope he turns up alive and well soon and can explain his mysterious 2+ week disappearance.

Pretty scary stuff. I haven't gotten any vaccinations in quite a long time. And.....no flu. People get downright nasty and are completely closed minded when you bring up the dangers of vaccinations. It's frustrating.
Killing off the messengers is to be expected. Crazy time we living in. I'm interested now as to what he had to say. I'm going to go find out now. Thanks for the post!! : )

Thanks for taking the time to read/reply. My kids were offered the flu vaccination in school but I refused. A lot of their friends who had it became ill which vindicated my position in my mind. I'm one of the people who believe there is a link between vaccines (specifically MMR) and autism and it just so happens that I am also referred to as a 'conspiracy theorist' by many people I know.

There are a lot of people on Steemit who write about and have first-hand experience of the problems with vaccines but there are also a growing number of people on here who think it's all a conspiracy theory and they flag posts by people trying to bring information about vaccines to light.

Someone who has been posting consistently about vaccines since I started on here over 18 months ago is @canadian-coconut and I would recommend checking out her blog if you are interested in the topic as her feed will almost certainly have some good posts she has written or resteemed on the topic.

Thank you for the info. I'm going to head over to @canadian-coconut now. All through school, my brothers and I used the religious waver to get out of the vaccinations. My dad has been looking into the subject for years and convinced my mom that we shouldn't have them when we were younger. We are all healthy and don't have the same issues that we see with our peers. I'm not saying that it ALL has to do with us not getting vaccinated. Just facts to work with as we try to find out more. : )

I had heard he had been disappeared, but did not know of his remarks regarding the flu vaccine.

How could the enemedia have missed that detail?

How could the enemedia have missed that detail?

I know. It's shocking isn't it?

I was more interested in the fact that he had been involved in investigating Zika which in my opinion is a much bigger scandal if exposed than the flu vaccine. From my investigations I believe that the Zika virus was used to cover the fact that the babies being born in Brazil with shrunken heads was actually down to a TDAP vaccine that was given to woman in Brazil as part of a Brazilian government initiative 9-12 months before. The WHO, UN, CDC and the media were all in on this and if it was ever exposed it would be extremely damaging. Perhaps that was why he was 'disappeared' and the flu thing is designed to draw people away from TDAP/Ziza.