Before we begin the technical part of this tutorial series, let me give an introduction to the Swift programming language. Swift is the official programming language developed by Apple for developing macOS, iOS, watchOS and tvOS applications. It came on to succeed Objective-C and its latest version is currently swift 4.
If you are however familiar with earlier versions of swift like swift 3, you should easily adapt to this tutorial as swift 4 builds on the strengths of swift 3.

This iOS application will be an audio editor that will record the voice of a user and generate sound effects from the recorded file having different pitch ranges. To get started lets set up our project by setting up our project in xcode -Finally, create your project after selecting a suitable storage location for the project files. The MVC pattern (Model-View-Controller) is a software development pattern in which a software is organized by being decoupled into 3 parts;

In our app, the controller will receive tap instructions from the user and implement the logic for playing the audio effects on this tap.

To the left of our screen in the above image, we can see our project files initially generated by xcode, these files represent the basic building block of our app and they are what we will build upon. The AppDelegate.swift file represents the entry point class of our app, it extends the UIResponder class and implements the UIApplicationDelegate protocol. It is this class that is first called when our application launches and it has a couple of methods

Moving on, our initial application controller is represented by the ViewController.swift class and initial view is the Main.storyboard which represents the first layout a user will see on launching the app. It is worthy to note that the ViewController.swift class will receive input from views in our Main.storyboard and use it to interact with our model which we will be creating very soon.

The Main.storyboard houses the views for interaction by the user in which the user will begin recording his/her audio and also stop recording. It is initially an empty screen and to add views we simply use the utility pane on the right and drag and drop the views onto the board. 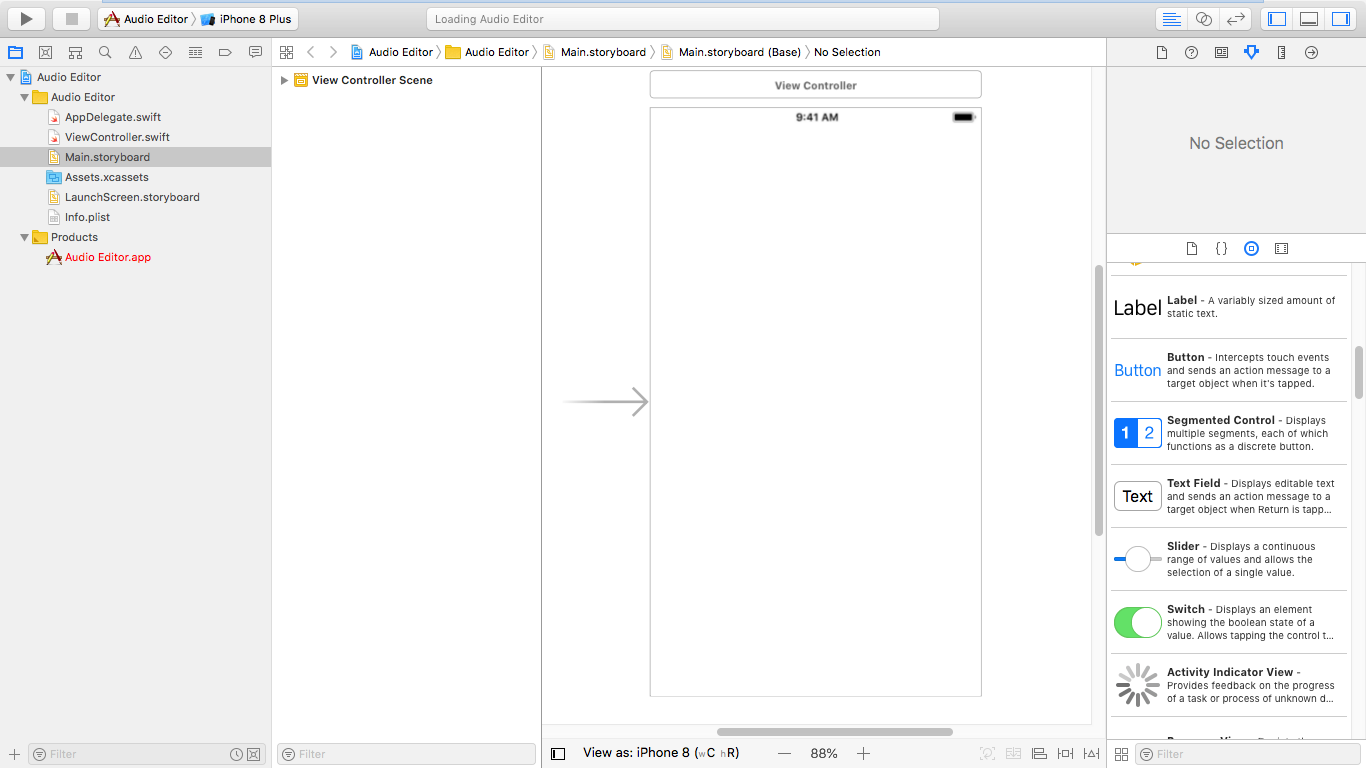 For this app, i will be adding

Drag these 5 views onto the screen and position them stacked vertically ontop each other but with the toolbar on the top part of the View. The start Recording button is placed in the center in the application using the blue lines to locate the center of the screen and the other views are constrained to it using the concept of Autolayout.

Autolayout is simply a layout pattern in iOS for positioning views relatively constrained to each other so as to persist the same size of views in different screen devices and in different modes of screen orientation (portrait or landscape). In simple terms it is an iOS layout that tells our views how they should be arranged using constraints to bind them to each other or to the edges of the screen of the device.

After dragging the views, we simply constrain them by selecting each view holding the ctrl button and dragging it diagonally to the view it should be constrained to. This pops up a menu in which you will be asked to select the type of constraint to apply and in our app we simply hold the shift key and select the center horizontally and vertical spacing constraints.

Each view can be labelled by selecting the view and using the attributes inspector panel to edit its various properties as you wish. Depending on your preference, your choice of colours might be different but the layout obtained at the end should closely resemble that shown below. Do not worry about the image backgrounds of the button, they will be explained in the next tutorial, for now simply ensure your views are stacked as in the same position as you can see in the image, vertically ontop each other and centered horizontally. To use our views we have to create references to them in our ViewController.swift class. This is quite unique and easy to do in swift as it is simply a matter of dragging them to our code after using the Assistant Editor. To open the assistant editor, simply select the Main.storyboard and click on Navigate-->Open In Assistant Editor which will open the ViewController.swift class side by side with the storyboard. Then click on the view to be connected, hold ctrl and drag to the point on the code you want it to be connected.

A small pop up menu opens which requires you to select an appropriate name for the function to be called and also a connection type. Connection types are can be either Action or Outlet. An action connection implies that the view is to send a signal to the controller when it is tapped while the outlet creates a reference to the view in the code for further use or to create changes in the view when something else happens.

I connected my Start and Stop Recording buttons as outlets and actions to my ViewController, the code is shown below,

The alpha of the recordingButton is set to 0 (fade out )by calling the created reference to the start recording button view using self.recordingButton. The animate method from the UIView class based function to animate the view, passing in the animation duration and describing the type of operation to be carried out at the end of the animation which is called in the Completion handler method. The button thus animates by fading out and in when it is clicked indicating the start of the recording.

Now that we are set up with the initial part of our UI, you can test your app on an emulator by clicking the run button, represented by a play icon button on the top. Your app should build successfully and interacting with the buttons should call the methods and print the string to the console. 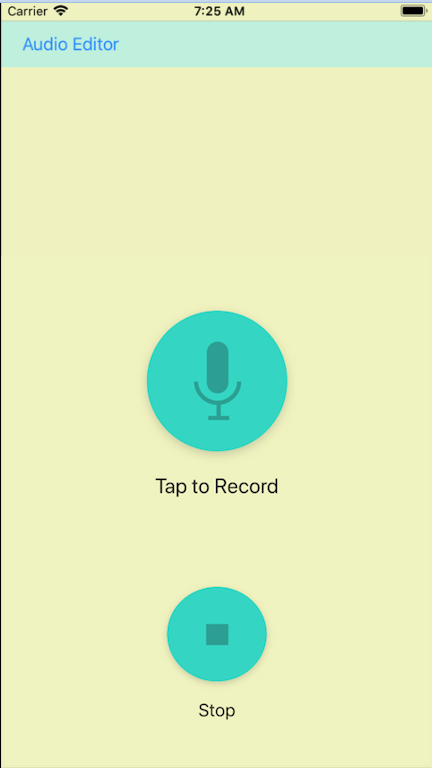 In the next tutorial we will begin to implement the model for the Audio Editor and go into indepth development of the application. Thanks for reading, I hope you keep along.

Your contribution has been evaluated according to Utopian rules and guidelines, as well as a predefined set of questions pertaining to the category.

To view those questions and the relevant answers related to your post,Click here

Thank you very much. I will certainly take note of your advice in the upcoming tutorials.