hagbardceline (60)in #ultrasonography • 5 years ago

Disclaimer
The following article can be seen as a (rather technical) prologue to some future articles dealing with ultrasound elastography in general. Please let me know if you were able to spot some mistakes or if you didn't grasp some of the concepts. In the latter case, I hope I can be of some assistance providing further explanations.

Shear waves (also called s waves or transverse waves) are waves which, in some sense, behave like real water waves. They are oscillating perpendicularly to the direction of propagation. The figure below shows the physical differences of these two types of waves.

Inducing shear waves in soft tissue
In soft tissue, shear waves can be generated by using several different approaches. Many shear wave elastography imaging methods rely on a shear wave induction using conventional compressional waves by applying a high energy push to the focus of an ultrasound beam. The resulting shear waves travel away from this focus point perpendicularly to the direction of the compressional waves. In an absorbing tissue and under the assumption that a plane wave is used, the resulting acoustic radiation force F from this push can be represented as follows [2]:

W_a is the power absorbed by the medium at a given spatial location, alpha is the absorptioncoefficient of the medium, I is the temporal average intensity at a given point in space and c stands for the speed of sound in the medium. 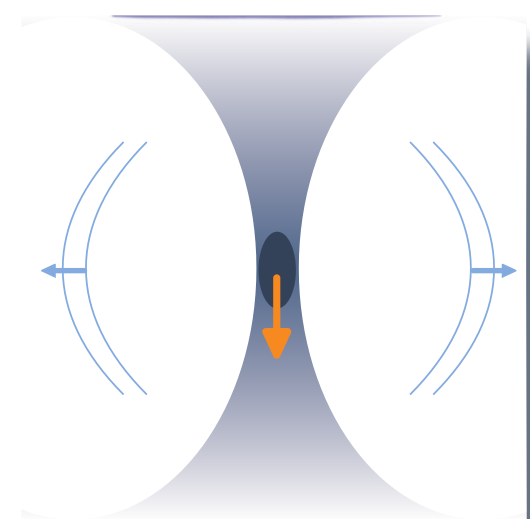 Source: [3]
The figure above shows the generation and propagation of shear waves in a tissue-mimicking phantom, which has been imaged using ultrafast imaging. The uppermost image shows the tissue 2 ms after a focused high-energy ultrasound beam (i.e. push) has been applied. A stiff inclusion is indicated with a red circle. The other images show the tissue 5 ms and 10 ms after the initial push. The grey level indicates the amplitude of the displacements generated by the shear waves in the tissue. It can be clearly seen that the shear wave travels with constant speed in the first two images. The lowermost image, however, shows that the propagating wavefront is distorted when passing through a harder inclusion as the shear wave propagates faster in the inclusion.

Additionally, it can be seen that reflections of parts of the shear wave are sent back to the push region again. The shear wave propagation speed differences between the surrounding homogeneous medium and stiffer parts of the tissue provide a very valuable source of information concerning the hardness of different tissues in the ROI.

Very interesting article which in my opinion should receive much more attention.

I think so too my friend. Thank you very much for resteeming though. Really appreciated. :)

Thank you very much for commenting. Glad you liked the article.