President Trump Drain the swamp ? Here are members of the CFR and Trilateral Commission named by Trump for his cabinet - Trump Swamp part 1

Donald Trump said during the elections "If we win on November 8 we will drain the swamp". Trump used the term to refer to "corrupt establishment" and corruption. CFR and the Trilateral play a role in US foreign and domestic policy. These two NGOs were created by David Rockefeller and the Wall Street crowd to define US government policy in crucial government and corporate positions to ensure that this policy is promulgated. If you want to understand the role and the functioning of the American Deep State, the CFR and the Trilateral Commission are crucial. Since becoming president-elect, Donald Trump has not really said it, especially when it comes to his administration, which now has more billionaires and military officers than Trump had promised. Yes, he drained the swamp but he added a monster even worse .. 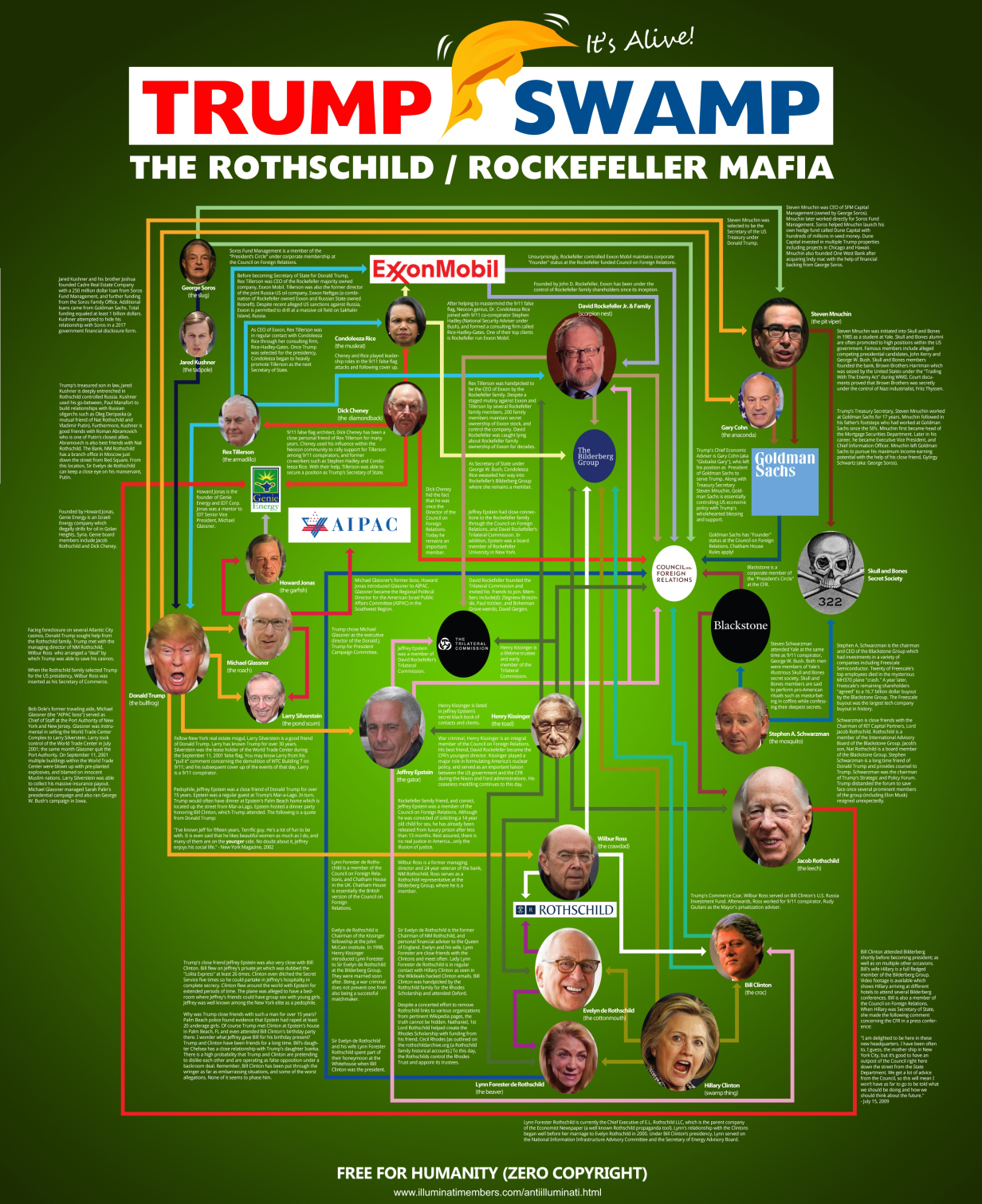 Trump is Puppet of Kissinger, CFR and Rothschilds

The Trilateral Commission is a group founded by David Rockefeller in July 1973. It is not surprising that Donald Trump and his Republican cohorts withdrew from all the promises that were off the agenda. It is no wonder has intensified tensions around the world and increased funding for the war. It is not surprising that Donald Trump turned to Henry Kissinger and the Royal Saudi family while developing contracts. It is not surprising that Donald Trump decided to "rebuild the army" and bombed Syria. All this should have been expected. Trump colluded with deep state operatives and establishment Republicans. The Trump administration is trying to counter with false claims, but Donald Trump himself is the same dirty trick, a fraudulent outsider. Henry Kissinger is a lifetime trustee and early member of the Trilateral Commission. He is listed in Jeffrey Epstein's secret black book of contacts and clients (Trump too). Kissinger is an integral member of the Council on Foreign Relations. His friend, David Rockefeller became the CFR's youngest director. Kissinger played a major role in formulating America's nuclear policy, and served as an important liaison between the US government and the CFR during the Nixon and Ford administrations. Fooled again.

While some Donald Trump supporters continue to buy into the notion that Donald Trump is an outsider opposed by the deep state, more people are learning that the Donald Trump campaign benefited from Steve Pieczenik, a long-time deep state operative who promised that Donald Trump would come out ahead in the 2016. Steve Pieczenik has a long history of very high level deep state activities. Pieczenik is a psychiatrist who worked for the U.S. intelligence aparatus. The mere idea of that conjures up all kinds of images of MKUltra and MKNaomi type programming. He was deputy assistant secretary of state under Henry Kissinger member of the globalist Council on Foreign Relations, and the globalist Trilateral Commission. He admits that the operation to install Donald Trump into the White House was a “far bigger” operation a large cabal. Russian collusion is the smaller part of the story. Steven Mnuchin was CEO of SFM Capital Management owned by George Soros. Mnuchin then worked directly for Soros Fund Management. Soros helped Mnuchin launch his own speculative fund called Dune Capital with hundreds of millions of starting money. Dune Capital has invested in several Trump properties. Mnuchin also founded One West Bank after acquiring Indy mac with financial assistance from George Soros. Steven Mnuchin was chosen to be the secretary of the US Treasury under Donald Trump. Steven Mnuchin was initiated into Skull and Bones in 1985. Skull and Bones alumni are often promoted to high positions within the US government. Skull and Bones members founded the bank, Brown Brothers Harriman during WWII.

I'm going to make two parties to this article but I think that just with that we can say that for now, the swamp is still there and all that promise was like most politicians to have supporters and won his election and for that he succeeded brilliantly

It needs a complete overhaul! want to join my political party and create something better! https://discord.gg/x3Kbej https://steemit.com/politics/@kph/steemit-political-party

The dumbing down of citizens around the world is complete. Facts and obvious connections mean nothing anymore. I don't believe for one second that Donald Trump is actually making any important decisions (or leading America in any respect). In my opinion, he is just another pedophile who was blackmailed by the Rockefeller-Rothschild cartel using their agent, Jeffrey Epstein. Epstein blackmails politicians.