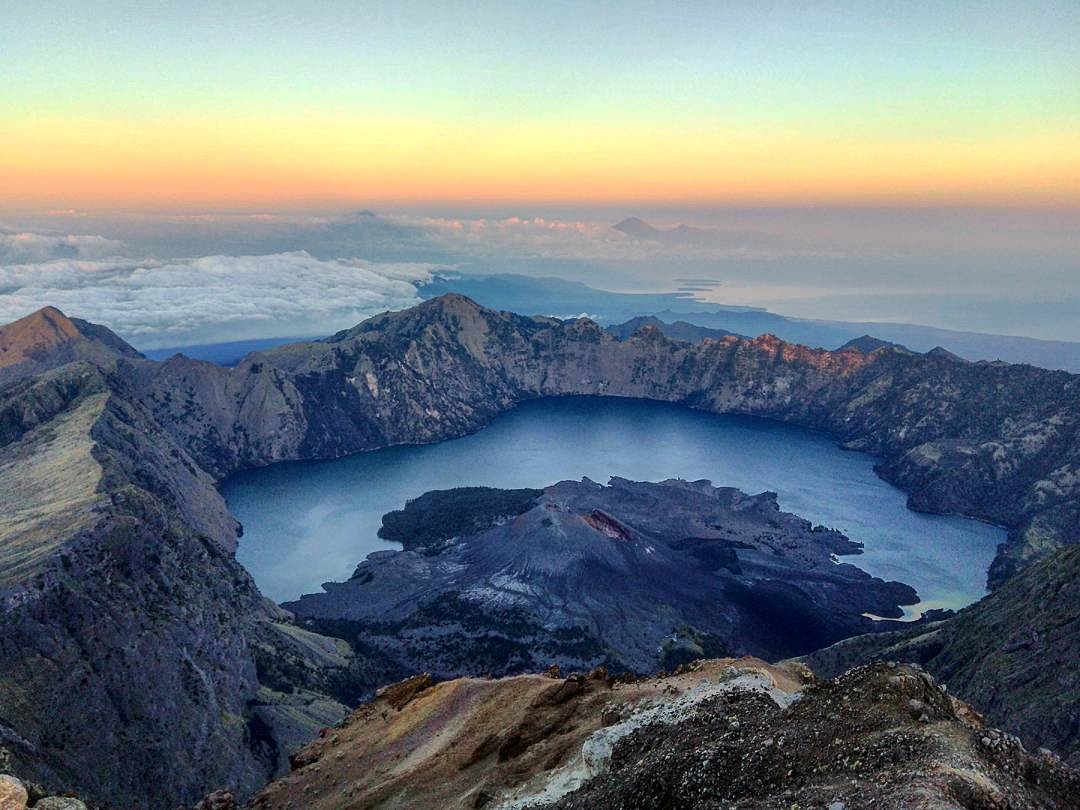 The caldera of Mt. Rinjani was hundreds of years ago volcanic mountain. It was higher than 3726m. During its last eruption, the top of the mountain was blown off. Another smaller volcano formed in the lake of the old volcano’s caldera. You can see it smoking in the afternoon. This is a continuation of my previous post where I shared how to prepare for the trip and what you need to consider, before going. I will take you with me to the summit in this one (:. All of the agencies will include one-night accommodation in Senaru in their package. We decided to pay for one more night and see first some of the waterfalls in the area. The village and the surroundings are really beautiful, so it is worth it to stay one more day. 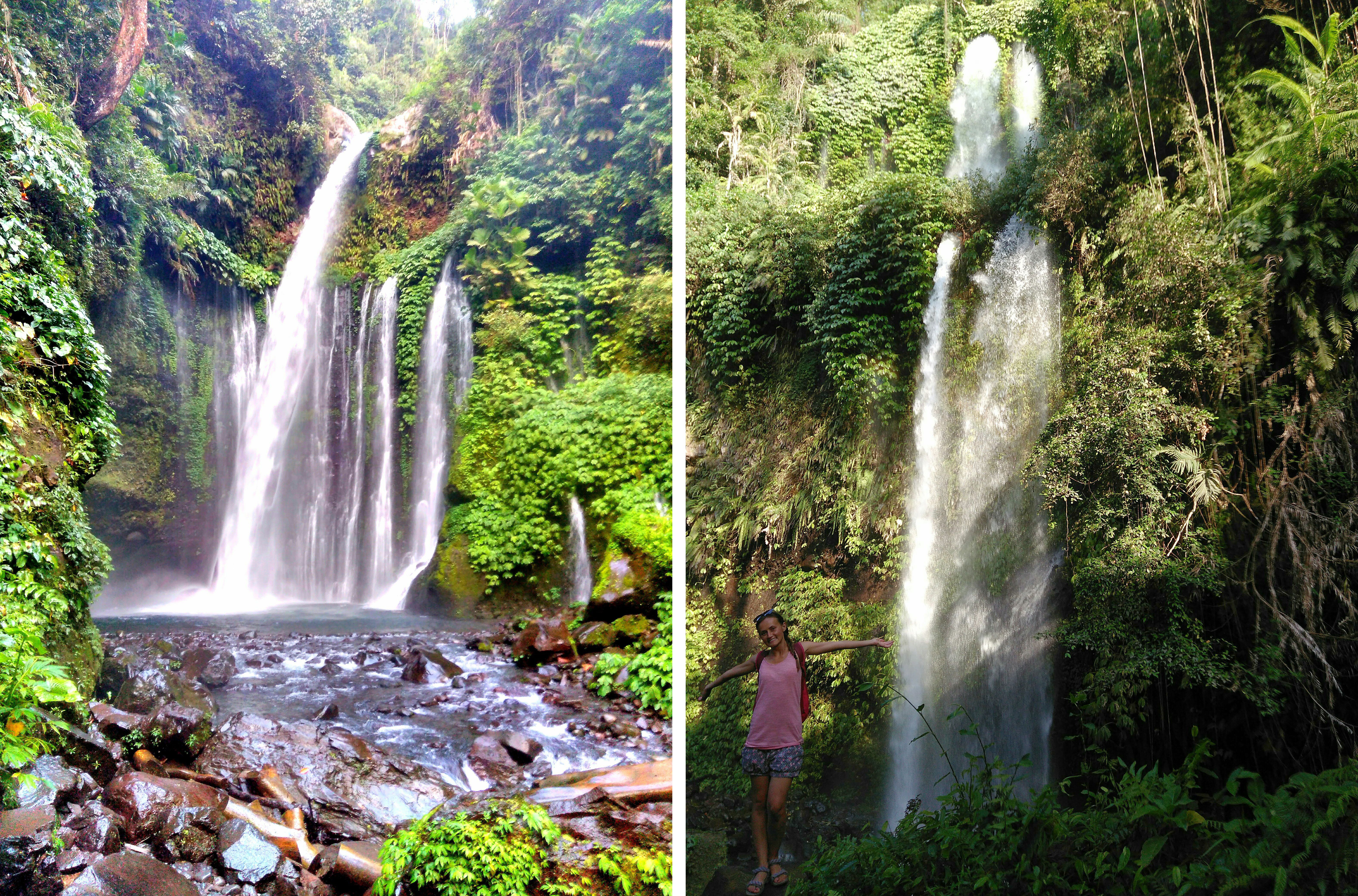 The trekking starts early in the morning. We were driven to the starting point which is at 915m. It is the place where you register and the agency pays the entrance fee for you. If you still haven’t stocked up with energy bars, do it here. The day is tough. Our final destination is at 2461m which make more than 1500m elevation for one day. In my opinion that is a lot. The trail goes the whole time up and in some places, especially at the end, before the crater rim, it is really slippery. There are two official stops. At the second one POS 2 – all groups are making a break and having their lunch. We made a count of how many vegetarians in our group we have. It turns out that from 13 people – 7 wanted a vegetarian dish. So everyone received vegetarian noodle soup with boiled egg. 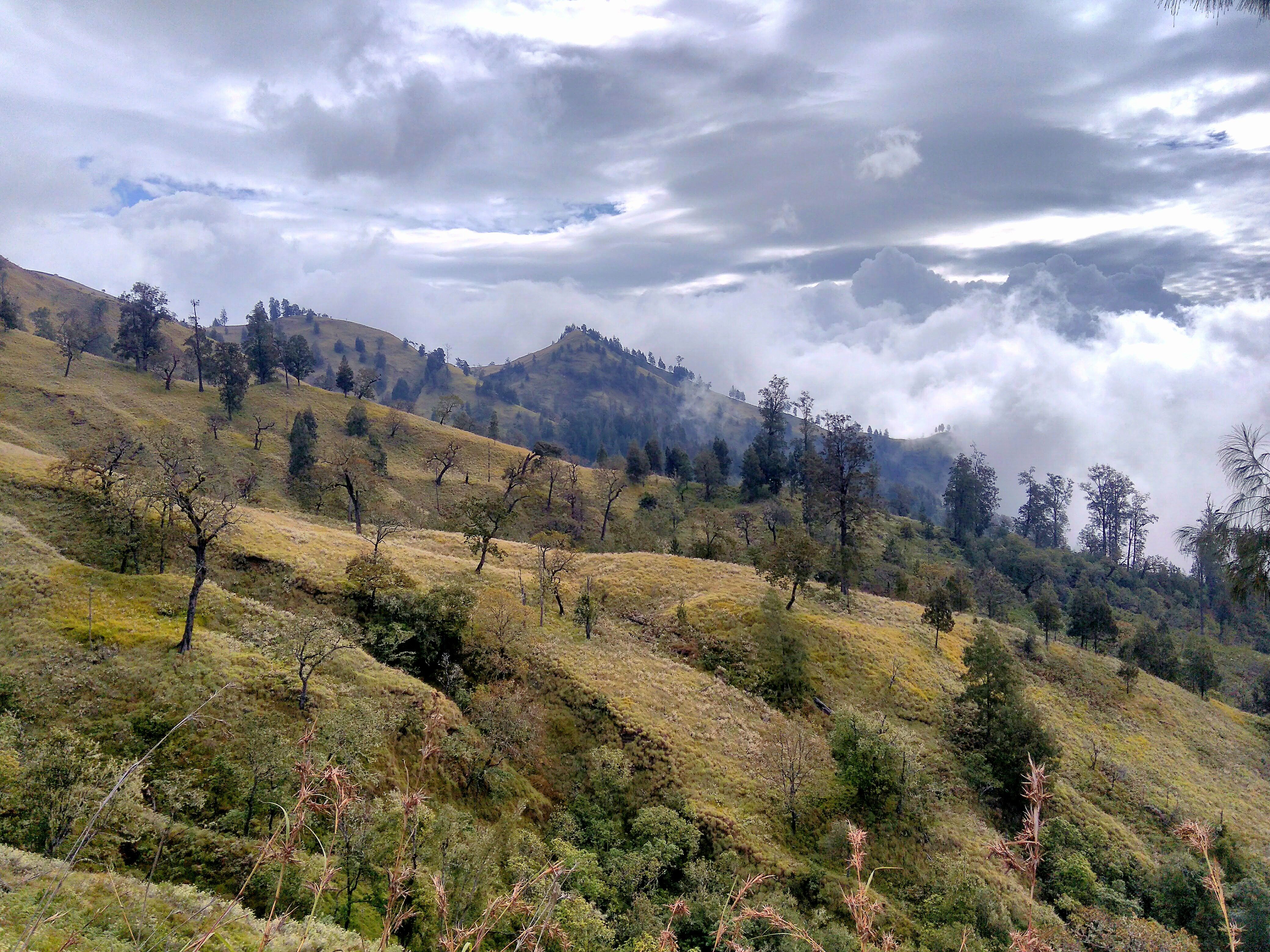 It was so delicious. Our group had luck and we got porters which either cook very good, or we were always very hungry to notice it was otherwise. I think it was the first reason. And for the same at the end of the trek, we made sure we tip them well. They really deserved it. Except for the main dish, we also got some plain rice and pineapple for dessert. The first day and half of the second day we had tea and coffee. After that our choice was limited to tea only, but the coffee wasn’t so good anyway. It is about 6-7 hours of walking to the crater rim, so we made another short break after lunch on the third official stop. Close to the top, you will climb above the clouds and the view will reward your efforts. We arrived at the top in the afternoon, around 4 and we had time to walk a little bit around. The sunset was amazing and the sky had absolutely crazy colors. As far as it becomes dark we all entered the tents and even had our dinner there. It was cold with clear skies and we slept under 10 thousand million stars above us (most of them visible :)). 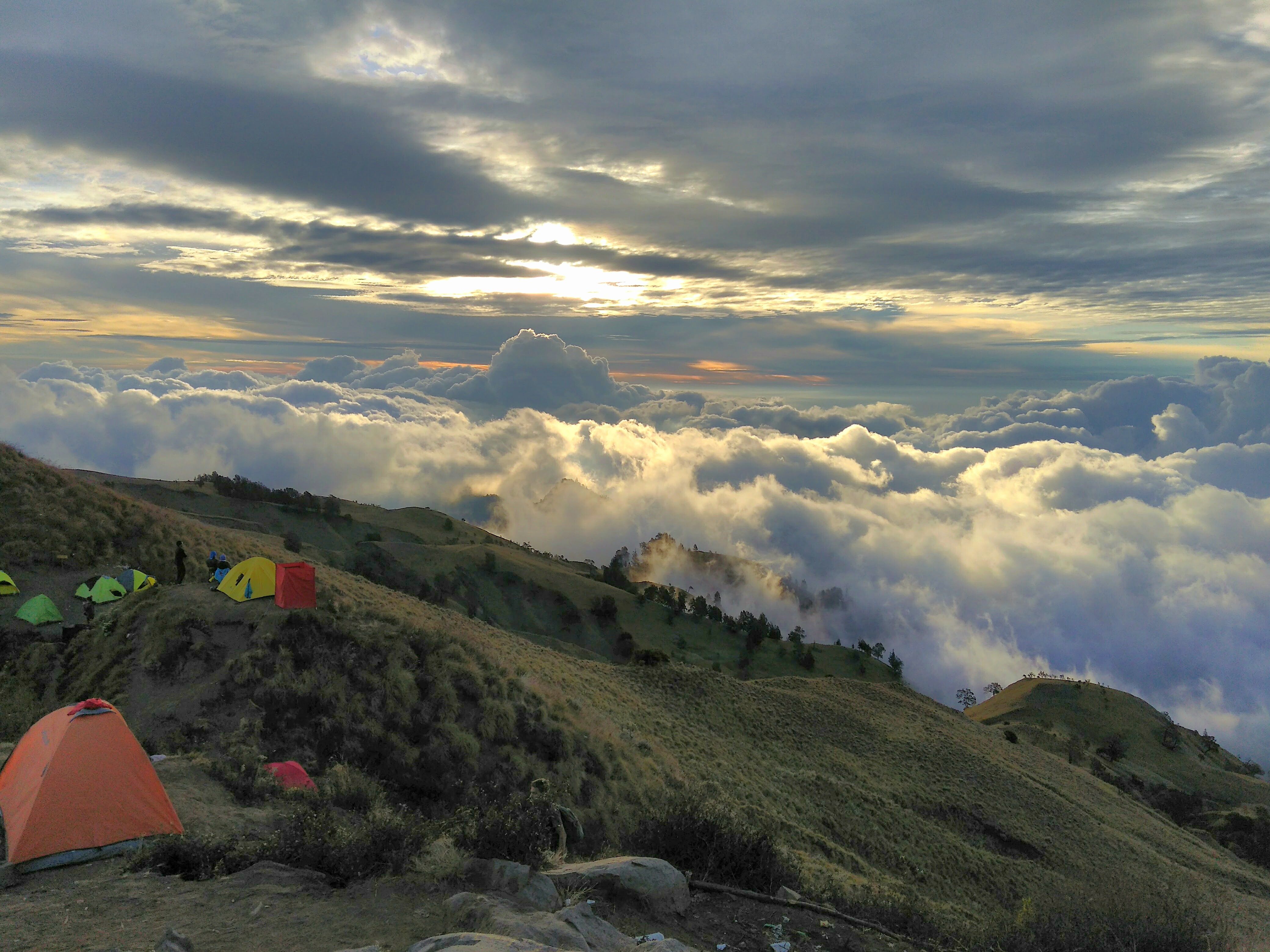 The next day we woke up early, had a breakfast and started descending to the lake. You need about 2 hours to reach the lake. We made a break and some of the people even entered the water. It would be really cool to swim in a lake with an active volcano, but the water was cold and I decided to go and enter the hot springs nearby instead. They are super cool and the water was really hot. Exactly how I like it :). We spend at least 1 hour there and then went back to the lake where our porters and guide were ready with the lunch. It was unfortunately followed up with 3 hours hike to the crater rim and the base camp before the summit. At the camping, right after our last ascend, there were people selling some sweets. We were so happy to see them and I think they put really reasonable prices for an altitude of 2939m. :) While waiting for the camp to be set up and the food to be ready we snuggled into our sleeping bags and watched another magnificent sunset lying down on the grass. 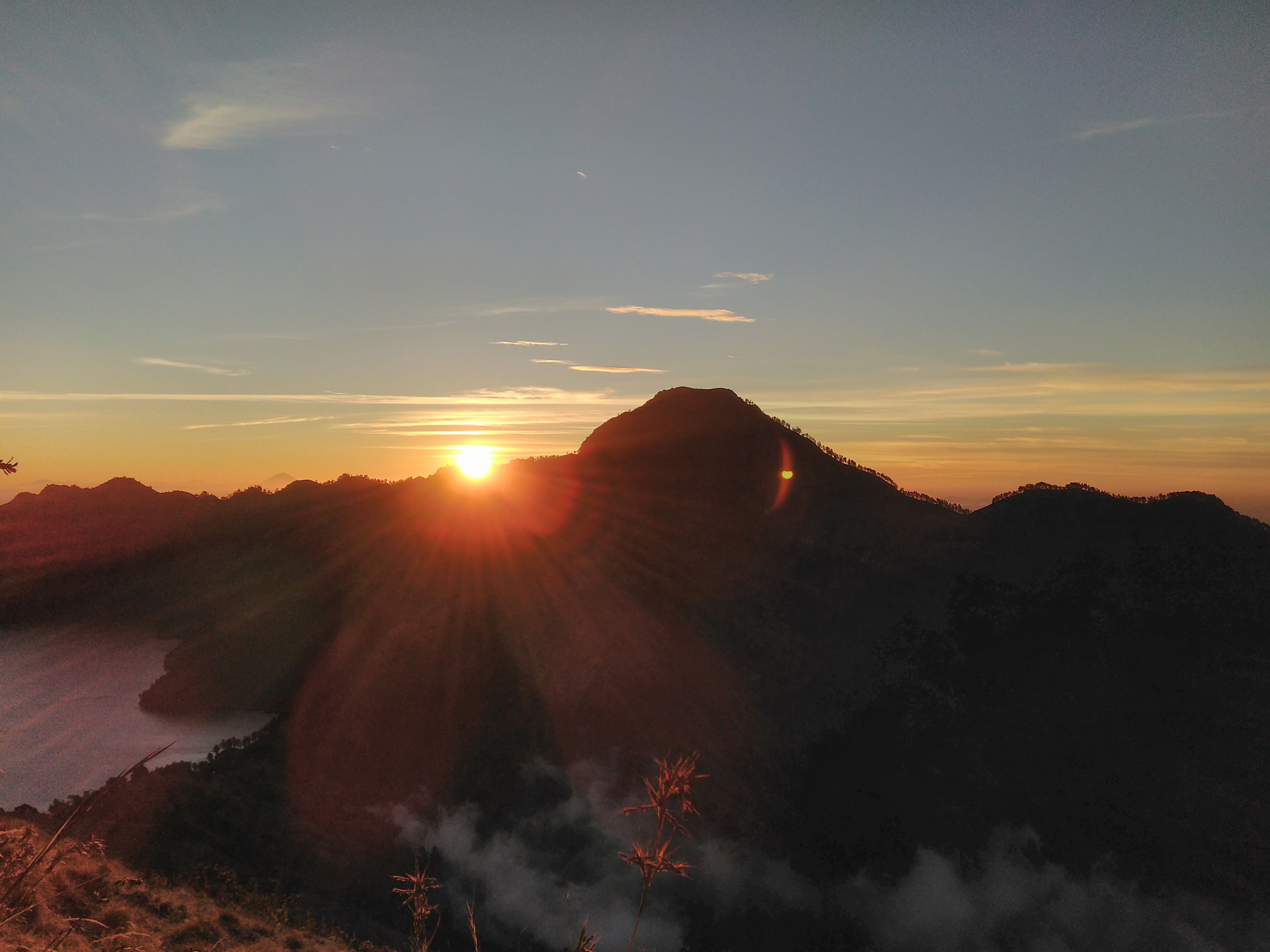 We had to do some fast sleeping as the climb in the morning starts at 2 o’clock. Some of the people decided that they are not going to the summit. In the morning 6 of us started climbing. We were woken up at around two and had a few biscuits and a tea. You don’t need more than that. Unfortunately, I couldn’t sleep almost at all. Maybe, because I knew I have to do some “fast” sleeping and was so excited for the next day. Six of us started climbing at 2:30. Important: take your sleeping bag with you!!! When you make it to the top you will probably need to wait for a while before the sunrise. Even 10 minutes on the top are freezing experience. You are at 3726m at the coldest time of the night. It is windy when you climb to the crated, and for us, it was even windier. For that reason, most of the people gave up. The wind was so strong that it was moving me a little bit. That combined with the darkness and the cold and the sliding on the little stones you are walking on, it can be very discouraging. Anyway, if you just keep going and focus on one step at a time, you will do it. So if it is important to you, don’t give up. When I arrived at the peak, I was the fourth person there. Soon, one of the guys from my group came and we snuggled into our sleeping bags. The first sun rays were magical and reminded me that if you truly want something you should never give up. It might be hard but when you make it happen it is worth it. We stayed 20 more minutes after the sunrise and started descending. We had a breakfast at the camp and continued to the village of Sembalun. The day for us, the people who climbed the peak, was rather long, but although it was hard and we were covered in black dust the whole day long, we had the biggest smiles in the group. I thanked Rinjani in my thoughts for allowing us to climb it. As one wise man once said “It is not the mountain we conquer but ourselves”. 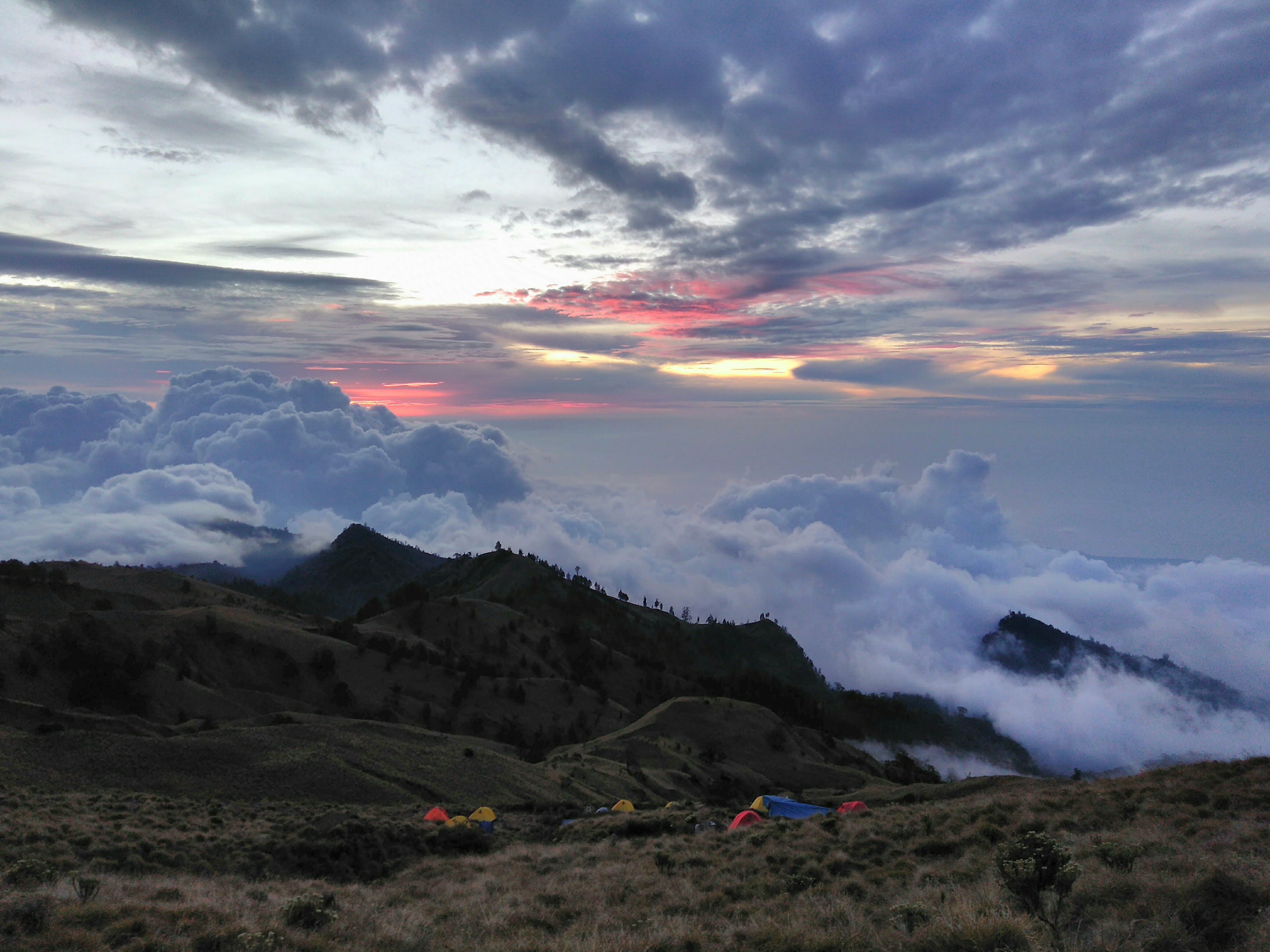 I hope you enjoy it as much as I did writing it :). Let me know if you need more information. Thank you for reading and upvoting. Cheers, Eva (:

Beautiful pictures and great story. Amazing that you made it to the summit for sunrise. I’m sure the soak in the hot springs would have been good for sore muscles.

Thank you, Stephen. The hot springs were indeed the thing you need after two days of walking :))

It is absolutely beautiful!!

by the way, what kind of camera do you recommend?

Thank you, girl :) I cannot recommend anything, as I myself don't use a professional camera (;

Thank you! Your picture is amazing!

Wow sounds like an amazing experience!! That is soooo early to start climbing but it makes sense 😛

if you start climbing later there is a huge probability you don't see anything from the top. It gets cloudy :S

Congratulations @best-trip-eva, this post is the sixth most rewarded post (based on pending payouts) in the last 12 hours written by a User account holder (accounts that hold between 0.1 and 1.0 Mega Vests). The total number of posts by User account holders during this period was 2182 and the total pending payments to posts in this category was $1673.03. To see the full list of highest paid posts across all accounts categories, click here.

very nice views. Glad you had some good weather up there! If I would find myself in Indonesia one day I would definitely do this hike as well. Thanks for sharing.

It's the best thing you can do there in my opinion :))

What an incredible post you've made here, and it had to be to be featured! A lot of strong posts are in today, haha!

Amazing content I hope a lot of people see and appreciate this good story and so well presented photos are made professionally. Wishing you all the best.

Beautiful trekking and it seems you enjoyed a lot !

Thank you :) Is it your name Phil? because if it is your username is very cool :)

Thanks a lot for your response ! Actually Philipp is my name traslated into English that's why Phil :)

Nice to meet you as well :) Keep enjoying your trips your experience and your sharing!

Your photographs are absolutely stunning. Congrats on the climb, that's no small feat. I'm not sure about that 2am wake up though! :O

Thank you, Kylie :))) I hated the part with the 2am waking up as well, but if you make it until sunrise, and climb out of the darkness :D, I think it is okay :)

wow amazing post with incredible photos. Been to Indonesia about 6 times already but never been to Lombok. Think its time to go there in February. upvote, follow and resteem

Thank you very much :) Australia is pretty close to it, so its definitely worth to do it :)

Excellent later, very well commented, I am fascinated by this topic, I would love to be able to visit that volcano, I invite you to visit my blog, regards

thank you :) I will have a look

It's breath-taking!
It really is best trip!
Great shots.... wooohooo

Thank you and them as well :)

@best-trip-eva, Wow! an awe inspiring adventure. You have captured some beautiful photos here and I am truly envious of your trip. Upvoted and following, I hope there is more to come!

I am following you as well :) thank you for the kind words (:

Your welcome, it has been a while since I have been on a distant adventure, I live in Thaialand, so I tend to write about different places here, Fridays I write about My latest mountain bike adventures!

I haven't been to Thailand, but it is on my bucket list as well with all other countries around :) I will be checking your post for interesting places ;)