The Terrace At Machu Picchu In Peru 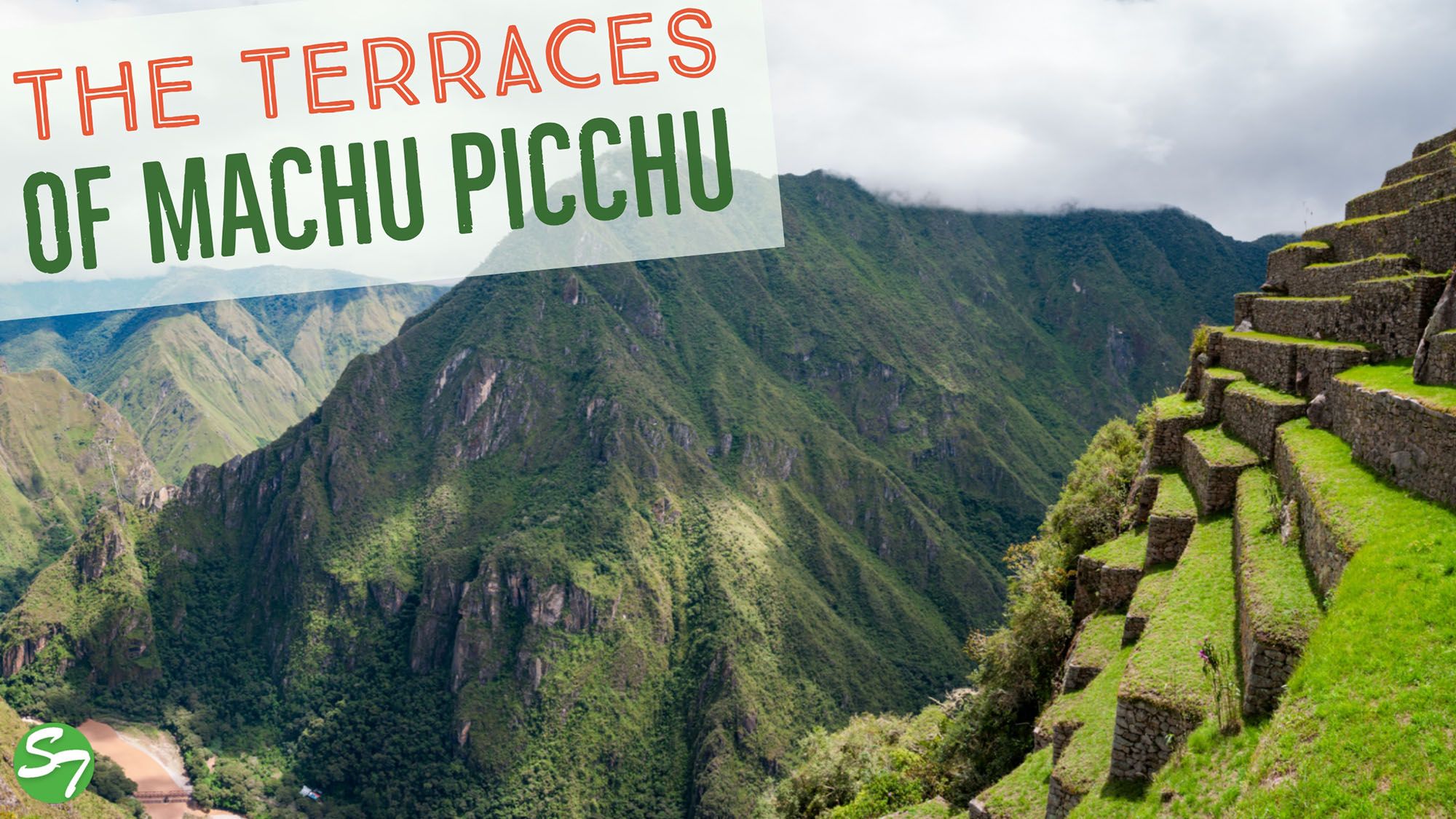 I often find it's the small things that make the biggest impressions. The most innocuous details can trigger the imagination revealing the world in new ways. This happened when I visited Machu Picchu, the lost Inca city atop a mountain, deep in the Peruvian jungle. (The famous view of Machu Picchu. You can see some terraces in the foreground).

I'm sure most readers are familiar with the view of Machu Picchu shown in the photo above. It's a dramatic and inspirational vista, but for me, it was something more ordinary that brought the ancient city to life. I found the agricultural terraces cut into the mountainsides intrigued me. I'm from a rural area in the UK, so I'm used to large rolling fields of barley, wheat, and corn. Perhaps this is why I was so struck to see a field staggered into steps and perched on the face of a mountain. I imagined what it would be like to work those narrow strips of land and what crops may have grown there. As my thoughts wandered, the ancient city came to life in my mind. 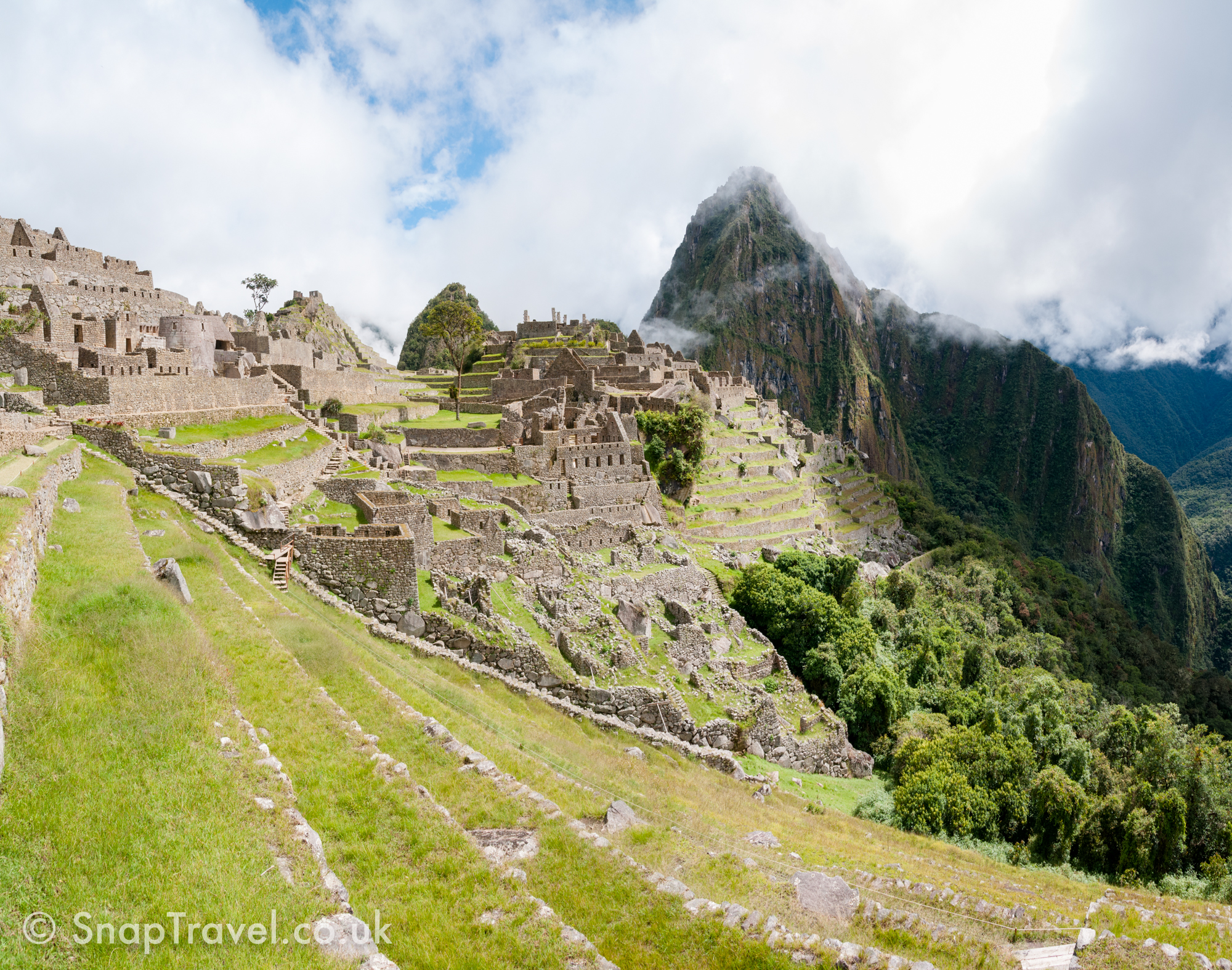 (A lower view point, taken from the terraces in the agricultural area).

To reach Machu Picchu, we set out from Aguas Calientes before sunrise to scale the mountainside. At first we climbed in darkness, and later through a thick fog, until we reached the summit and the entrance to the city. Unfortunately, we couldn't see it. The morning fog lay over the entire city like a blanket, making it impossible to see more than ten feet. Near the entrance we found a small cafe and gift shop and order coffees and breakfast. The modern-day intrepid adventurer, never too far from lattes and Wi-Fi. (View of the terraces as the morning mist is starting to clear. Look at the drop below the bottom terrace).

This morning fog seemed stubborn and refused to budge, but we tried to make the most of it, and spent the first half of the day wandering around the murky city taking photos. The ancient ruins had an eerie yet beautiful quality shrouded in low hanging clouds, but it was frustrating to have the majority of the city hidden from view. Fortunately, as the sun climbed to its zenith, it burnt off the morning mist leaving a warm and bright afternoon. As the fog cleared, I got my first clear view of the agricultural terraces. 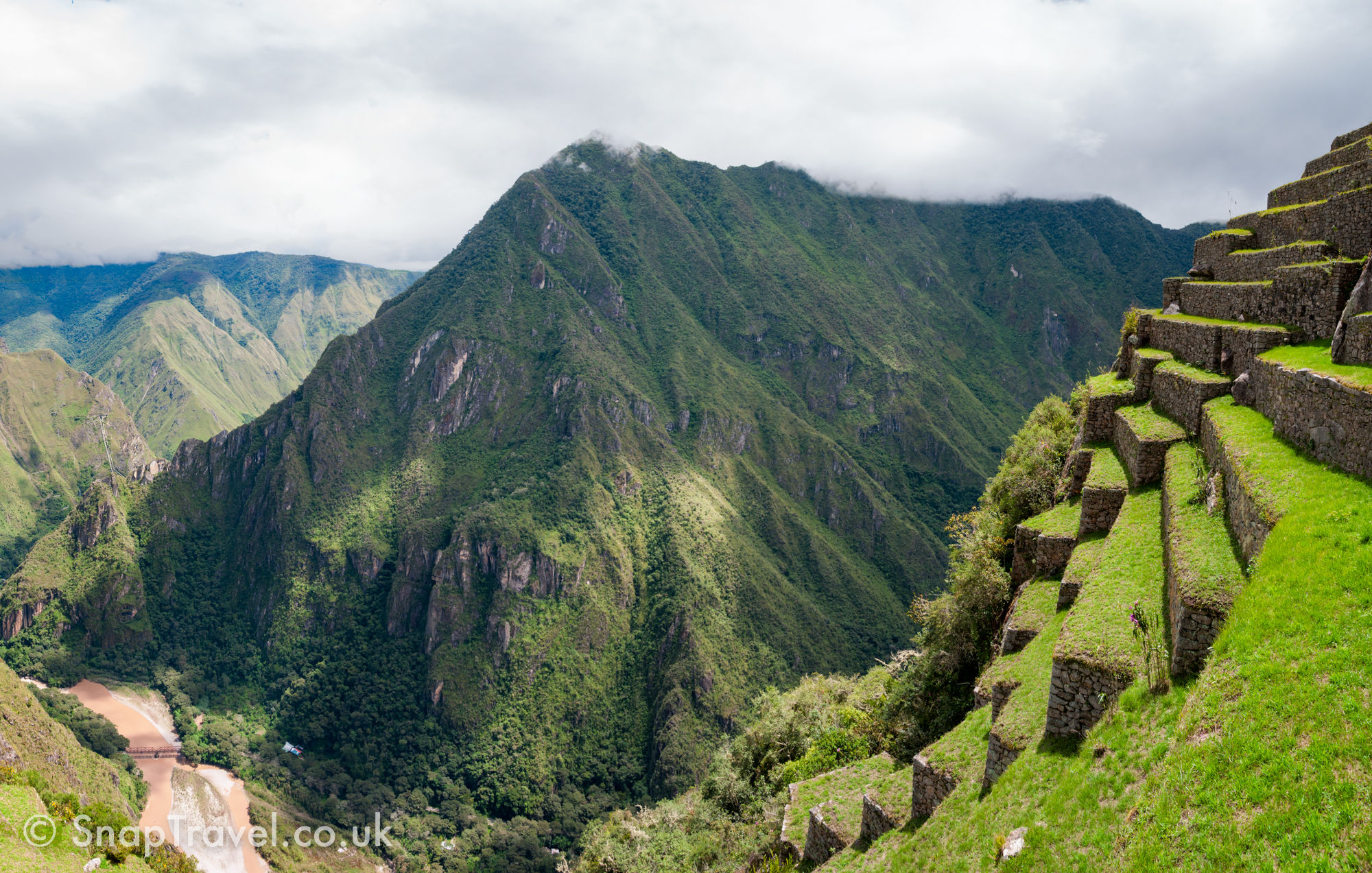 (These were some of the steepest terraces I saw, understandably visitors are not allowed to walk on them).

The Spanish name for the terraces is Andenes, originating from the word Andes. I guess this was the first time the Spanish had seen anything like this, so they named them after the mountain range. The thing that first caught my attention was the steepness of the terraces and the precipitous drops. The Inca's used every inch of available land, building right up to the edge of sheer cliff faces. To farm these narrow slivers of land, you'd need to be as sure-footed as a mountain goat or in this case, a llama. (These are the main terraces in the agricultural area. Here you can more clearly see the building technique).

At first glance it appears the Inca's cut the terraces into the mountainside, but this is not the case, as the ground is solid rock there's little soil to dig into. Instead, they built strong retaining walls, then backfilled the space behind them to make each platform. By layering the material in this backfill with coarse gravel at the bottom and fine soil at the top, they created perfect aeration and drainage in the terraces. As very little soil naturally forms on mountaintops, workers carried most of the fertile earth up from the valley floor thousands of feet below. To irrigate the land, a complex system of aqueducts utilises a spring on the north side of the mountain. These aqueducts disperse water around the city. The well-built system still functions to this day, keeping the terraces green and fertile.

So what did they grow here?
They may have grown potatoes and corn, the well-known staples of the Inca diet. However, some experts say there's evidence they grew coca and orchids for medicinal purposes. As with much about Machu Picchu, there are plenty of unknowns and mystery shrouding things. Few 'experts' seem to agree about how much agriculture actually took place at this site. Some say the city could have been completely self-sufficient, growing crops and farming livestock, such as alpacas, llamas, and guinea pigs. Other say, it's unlikely the agricultural area sustained more than a hundred people, (it's believed up to a thousand people lived in Machu Picchu at its peak), particularly if they were using much of the land to grow nonessentials like coca and orchids. In this case, Machu Picchu would not have been independent but relied heavily on trade within the Inca empire for its survival. 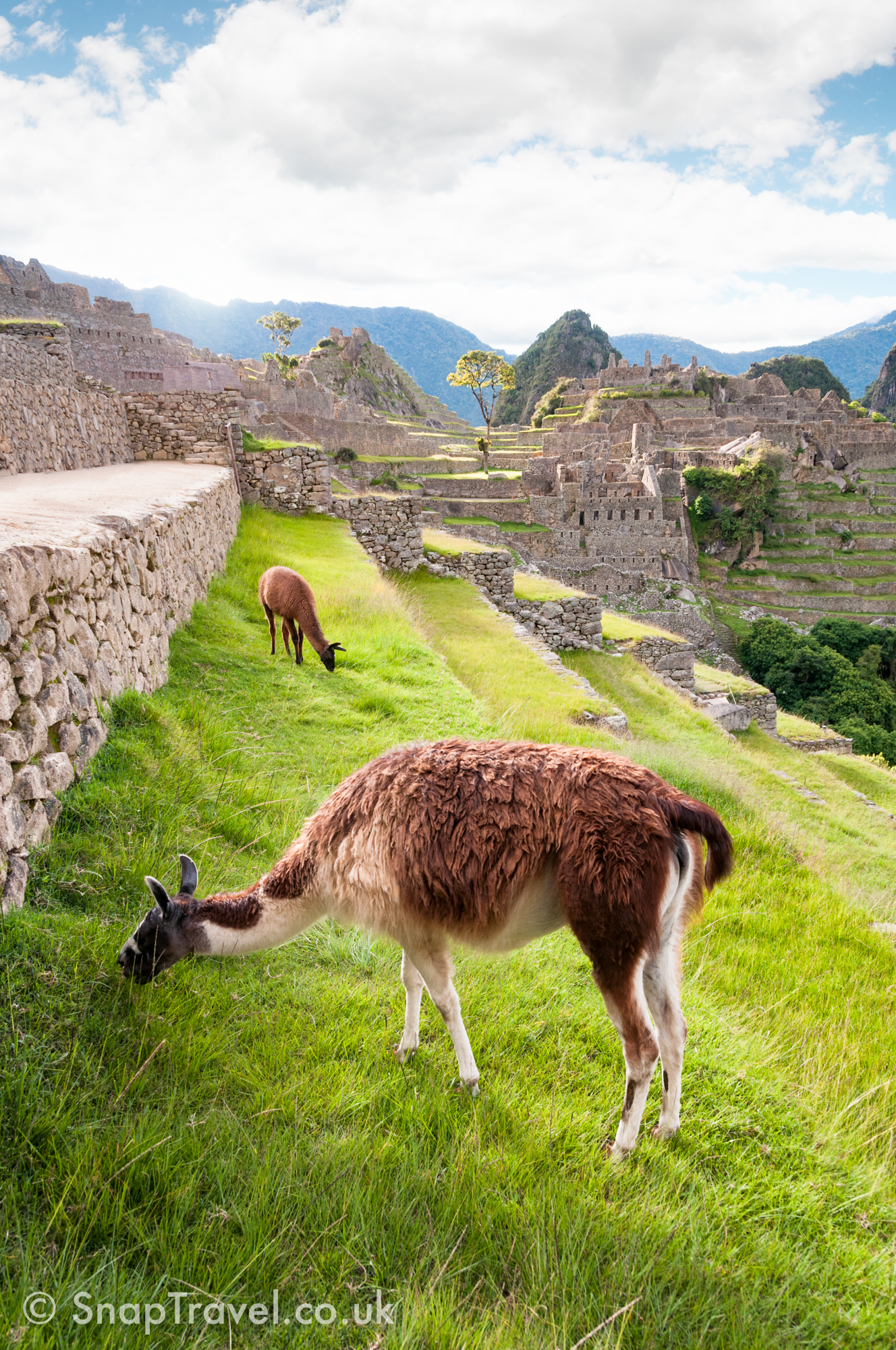 (Llamas grazing on the terraces. They roam freely among the ruins). I find all the uncertainty only adds to Machu Picchu's character. Nothing allows the mind to wander more than knowing the truth is a mystery and nobody can say for certain. Perhaps someday archaeologists will have definitive answers. But until then, daydreamers like me can use our imagination to fill in those knowledge gaps. What was it really like to live in a city atop a mountain, deep in the jungle, five hundred years ago? To cultivate a narrow strip of land on a mountainside or farm guinea pigs? The city was clearly part of the Inca empire, but is it possible that after the empire's demise, people lived on here in isolation from the outside world? I like to imagine those terraces teeming with beautiful orchids, while the city bustles with traders carrying exotic goods from the far reaches of the continent. 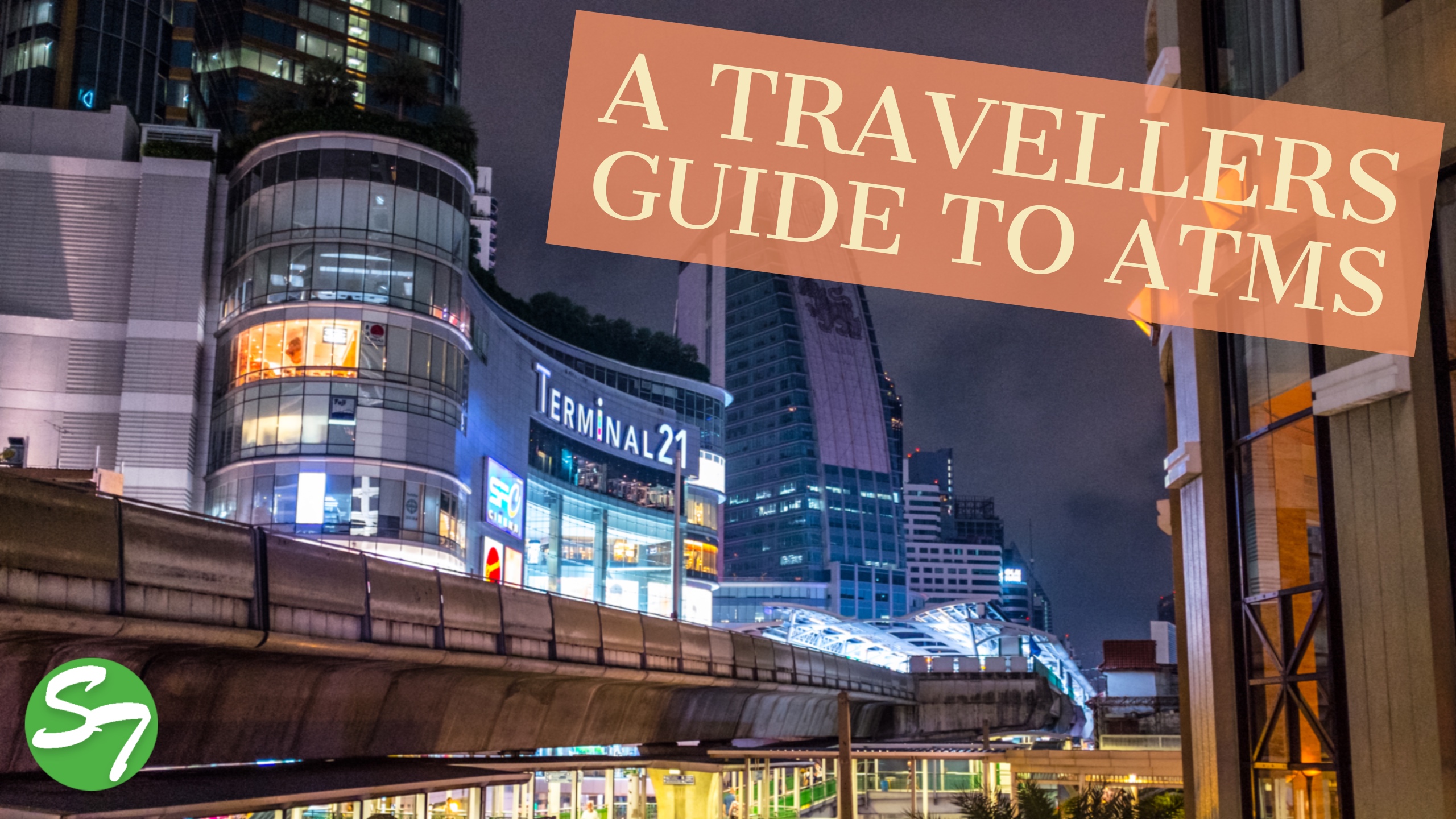 All content is my own original work. ©snaptravel - tbradford

In order to confirm your authorship of the content, please make a mention about Steemit or add a hyperlink to Steemit on your website:

You can remove this mention from your website, once we confirm the authorship.

There is already a permanent link to my steemit blog on my websites home page.

Thanks we have verified you.

It's such an intriguing and interesting place! I haven't been myself, but even after reading through this I want to head over and soak up that atmosphere for myself. How long did you end up staying in Machu Picchu?

as the sun climbed to its zenith, it burnt off the morning mist leaving a warm and bright afternoon

This was such a good way to let us know the sun was out and about. Great use of words and hallelujah for the sun coming out... the images later in the post were brilliant. The brightness of them really makes a difference in that setting. Fellow UK resident over here, I'm glad to see you getting out there and showing us the world! I'm looking forward to seeing more from you.

@penderis shared this post with us in BuddyUP! If you want to drop by to the server and hang out with us, you can visit our SafeLink here.

What a wonderful experience and fascinating place. There is so much mystery behind this city, my mind cant help but fantasize about its origins and its people. If only time machines existed..!

Thank you. A time machine would be great, until then I'll keep daydreaming.

Hey, came across your post through travelfeed. Seeing you're based in Peru?? We're traveling around currently in Huacachina and will be in Cusco on the 8th. Let me know if you're down to meet up with the fellow Steemian traveler :)