Lancaster Castle – A Tour, A Wild Haired Guide and some History.

We spent last weekend in Morecambe bay. You could say it’s a little downtrodden compared to our recent trip to Geneva, but our daughter was insisting we travelled ‘away’ for the weekend.

I could talk about Morecambe and how delightful the place is, but lets focus on something more interesting in the form of an 11th century castle.

This was the highlight of the trip and only being 40 miles away or so, I do wonder why I have never visited before. The gatehouse is very impressive and has not changed in over 400 years. If you check this wikipedia picture you can see this, compared to my photograph. We had to return the next day as we were too late for the tour. You can enter for free but not inside the castle. So we duly returned and the tour guide asked me if I was a senior, cheeky bugger!

While I’m not going to reveal my age to you, its double digits before I get to pensioner status. A great start! ‘No, I’m bloody not’, was my instinctual retort. He didn’t seem impressed; maybe it was a little early and he hadn’t had his coffee. 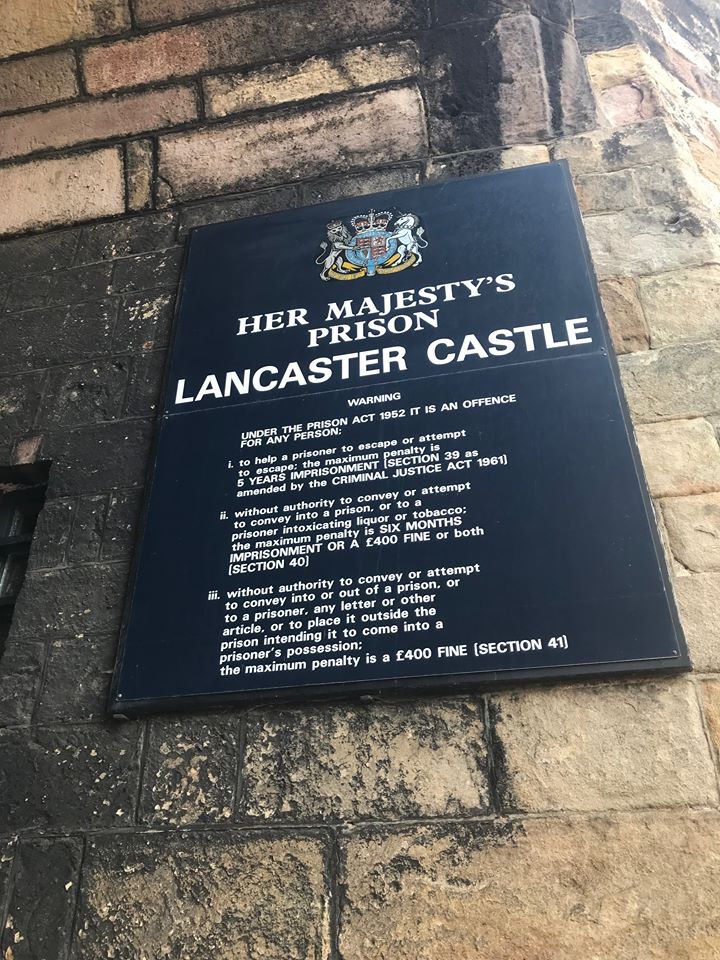 So I paid the tour fee, and a few minutes later we walked into the courtyard where the same guide talked about the witches tower, hangings, heads being chopped off and other such lovely topics.

It was insanely hot that day, and I was wearing just a t-shirt and finding it increasingly uncomfortable being stood motionless in the same spot. Our guide however, with his wild curly long grey hair, shirt, tie, jumper and jacket was not even breaking a sweat! What was this guy on? He could talk, Ill give him that!

I must confess I’m not a fan of guided tours, I prefer to make my own way around old ruins, castles and the like but here you have no choice.

From the roasting hot courtyard, we were led inside the castle which on the contrast was rather chilly. My daughter casually whispered air conditioning; I don’t think so!

The castle was used as a prison by Her Majesty until 2011, and there’s two actively used courts inside the castle, one being a crown court. We made our way from one court filled with coats of arms, to the second that contained a dock and a trapdoor. This is where the convicted appear when the court is in session.

Our guide explained that holding the right hand up as a show of ‘telling the truth’, is a legacy of the past where prisoners would be branded and thus show the jury their past crimes.

He also explained that the before around 1835, guilty prisoners would be executed publicly and that the very court we stood in was used by the Witchfinder Generals in the early 1600’s to denounce the witches. There was no mention of public burnings. Witches were held before their trial in the Witches Tower. You can see the brickwork is the original stonework compared to the surrounding ones (central below). 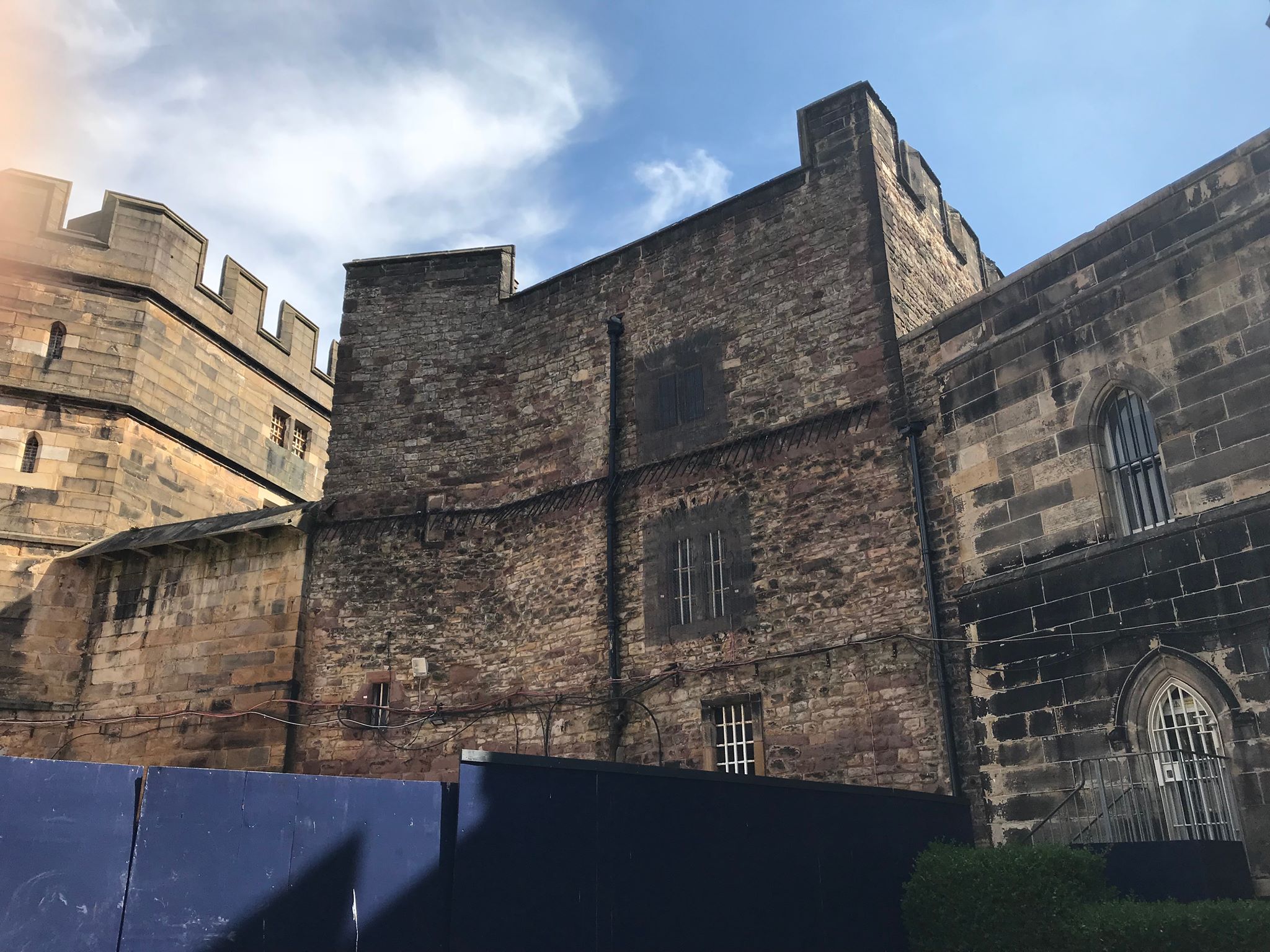 We were not allowed to take photographs in the court areas, but the next area contained some instruments of torture and items to hold the lunatics in place. Firstly the device to the left was attached to restrain them, and then they were strapped to the chair (right) and simply left there. 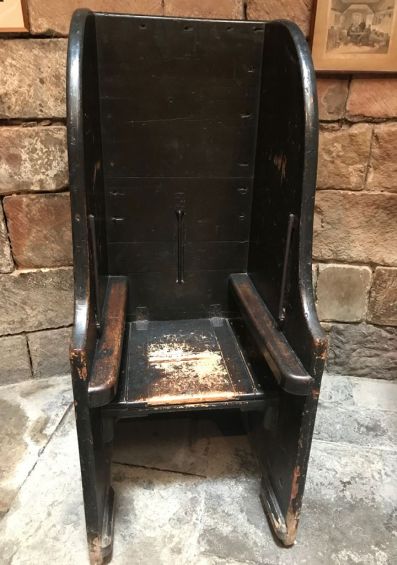 These items we were assured, were all genuine and had been used in the past. There were many manacles attached to the upper walls, that would have been attached to the prisoners bound for Australia for their crimes.

The ships that sailed these prisoners only disembarked from Southampton so they were marched on foot to the south coast complete with manacles. It took them several weeks to arrive.

Some other items of torture can be seen below. Scold's Bridle was for blabbermouths and forced the mouth closed and the tongue still. The person could not eat or drink either, very unpleasant! The Birch was still used in England up until recent times. 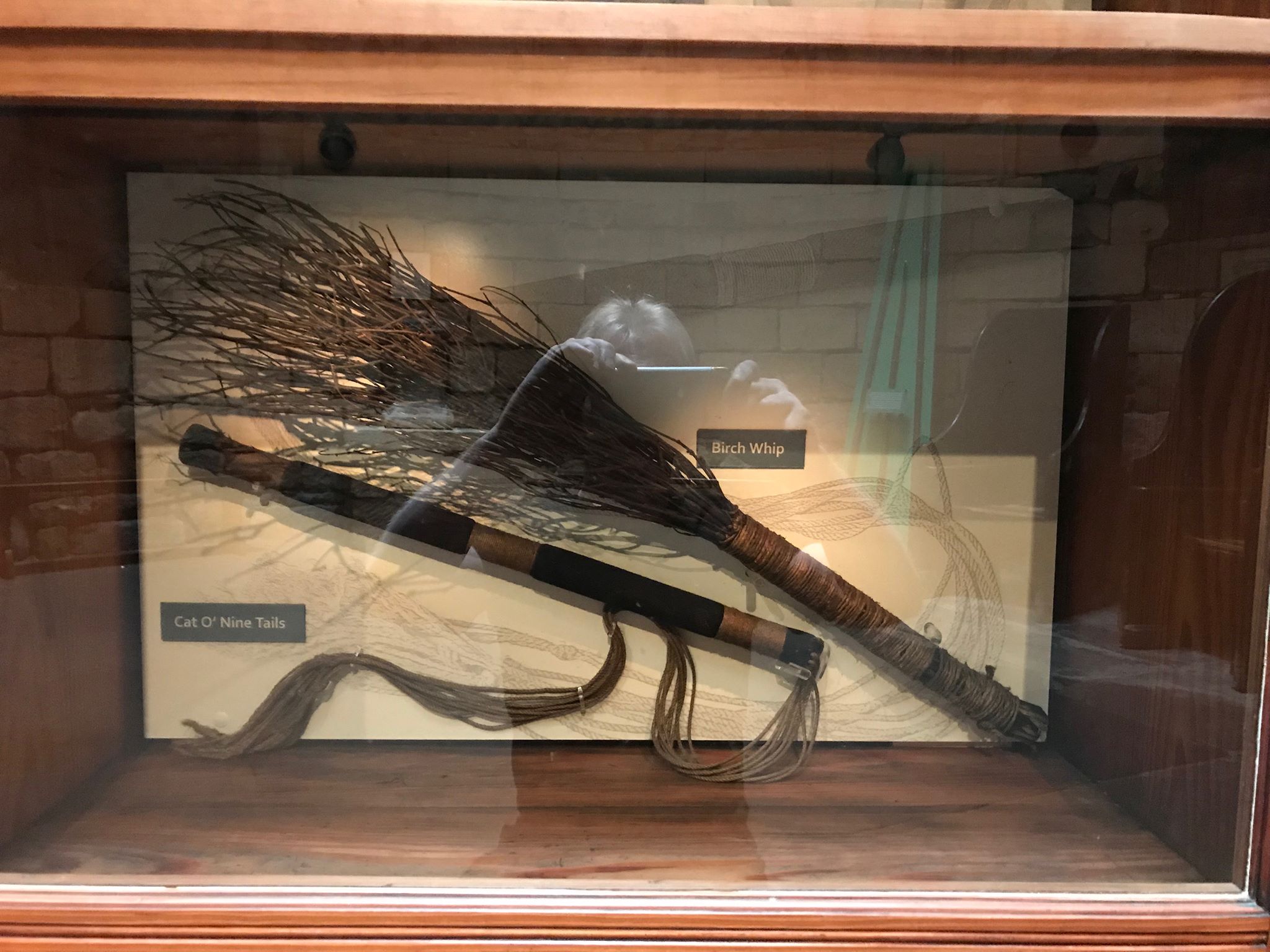 The last room before exiting the castle contained the jail cells. The wild haired guide invited us all in a cell, explaining he would close the door for a few seconds so we could experience the cold reality of the past.

It was almost completely dark for those few seconds, and the kids in the group got a little upset even for this short period. The holes at the top of these cells were used by the guards to converse with the unfortunate prisoners. They were always closed otherwise. 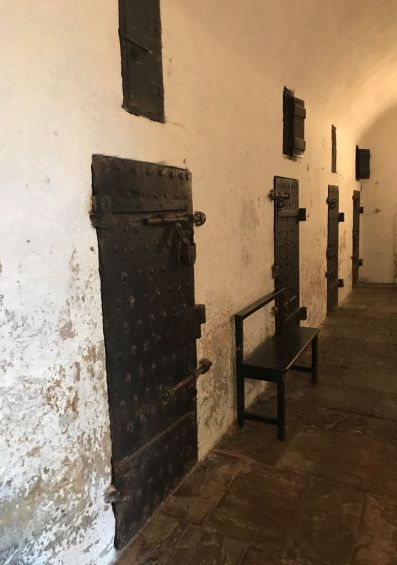 The tour took around an hour and was entertaining at times, but I got a little bored in the first courtroom. Overall it was worth seeing and I would recommend it if you are in the area.

All photographs were taken by myself.

Such an awesome place to visit! I read somewhere that there are no records of suspected witches ever being burned alive, so it doesn't surprise me that it wasn't mentioned there. Pretty spooky place, imagine if the walls could speak... Great post, thank you! :)

Thanks! The burning alive thing may have come from the movies I think such as Witchfinder General. The guide informed us all that hanging was the preferred way of execution.

I haven't seen that film. Just read up on it from the link, I think I have to put it on my to watch list now! lol 15th Scariest film ever!

Nice piece of history. It's creepy seeing how people were cruelly punished back in the day. Public hanging no thanks. Great post though and thanks for sharing.

Visit the most historic place is very memorable, because in addition to tourism we can also know the history.
You have shared your journey with a castle that used to be a place of punishment, it may sound a bit creepy.
Like @slobberchops

What a perfectly horrible place. When I stop and remember what humans are willing to do to other humans, it makes me ashamed to be one.

The architecture of the castle is beautiful. Its haunting past is creepy. Seeing the torture instruments reminded me of Dracula's torture room in one of the Romanian castles.

It might be really stupid, but i read Lannister Castle and associated it with Game of Thrones ;-)
The Scolds Bridle seems really cruel. Humans have been and still are really ingenious when it comes down to torturing.

That looks like a creepy place, though one I must visit sometime! (Hopefully an intentional visit.) I am amazed that it was a prison right up to 2011 - I wonder if convicts were thrown into the dungeon!

Hehe, I don't think so. They are really only for the tourists now.

What, they're throwing tourists in dungeons now?
(Sorry - couldn't resist)

Interesting how they used castles as prisons. I love those old buildings. It looks well preserved.

I do love a good castle and that looks like a mighty fine one; I've never visited.

It's hard to imagine going through some of those treatments/tortures - not sure I can even get my head around somebody thinking them up.

Old England does like its torture doesn't it? It must have been bad to live in those days for sure!

Wow very very very interesting, I did not know about the birch torture will have to look that up more. Very sad that the castle was used as a prison it has such wonderful architechture, but a very troubled past great post.

Most of our castles and heritage are like this. The old times were barbaric and the evidence and history shows this clearly.

Very nice. Too bad that they wouldn't let you take more pictures. I guess I kind of understand with the court areas for security reasons. The world being what it is now.. The entrance looks pretty awesome. Isn't it funny how we always forget about some of the cool stuff that is right down the road from us? Nice post!

Im going to try and find some more places to check out. Im sure theres more close to where I live!

All the talk of witch persecution reminds me of the scene from Monty Python and the Holy Grail.