MELAKA, NOT MY FAVORITE CITY AT ALL -Vivi's view (longer post with a lot of photos)

wnfdiary (67)in #travel • 2 years ago
From Singapore, we moved to a small town called Melaka (Malacca). The drive took only a little more than three hours, but we felt like we ended up on a different continent. What I was looking forward the most during this land travel was the green landscape. I knew there will be a lot of palm plantations, but I hoped for some green forest to be there as well. I imagined it to be full of those giant trees that were growing all around Singapore. Sadly, all I could see was the sea of palm trees and some rubber trees plantations. The closest to a forest was the lane right next to the highway and that was very disappointing. 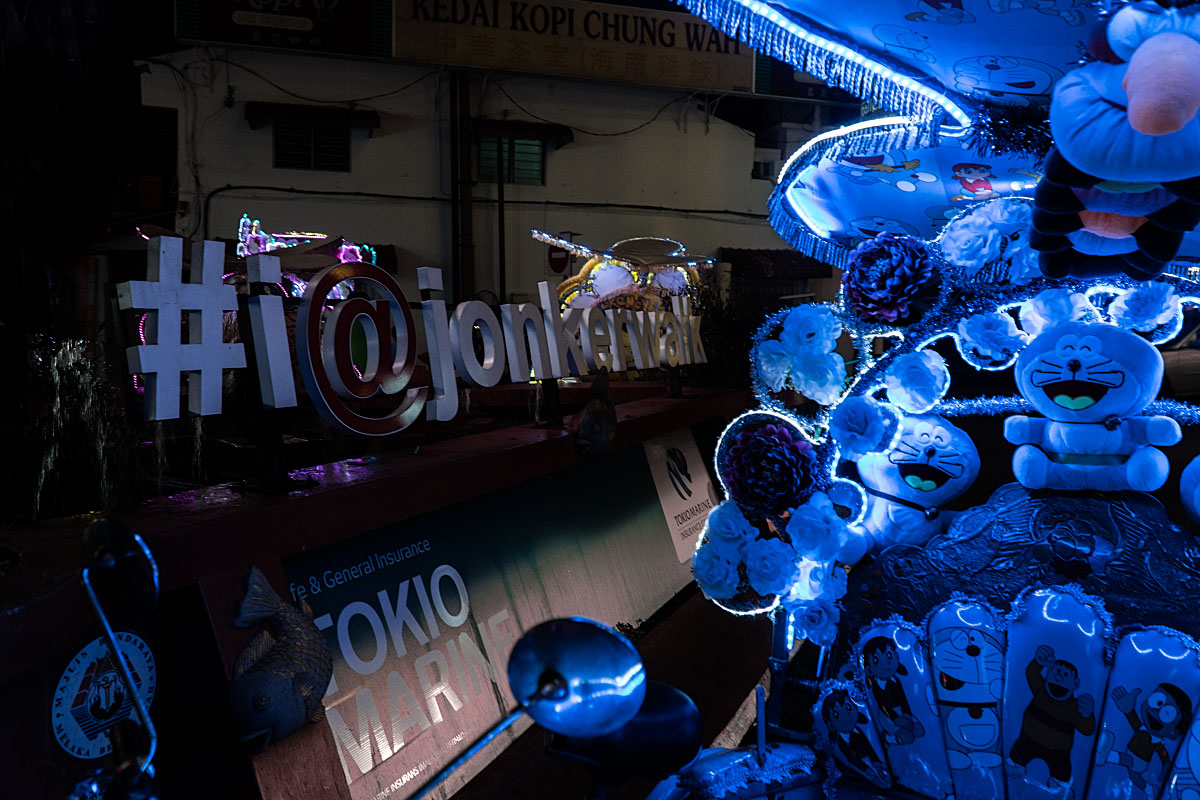 The graveyard is the right place

When we reached the Melaka the pouring rain greeted us. In fact, I was happy because of the rain, as it cooled down the temperatures for a little while. In addition to that, we had some free time to plan our stay. However, there wasn’t much to plan as everything was within walking distance. Every populated territory has two sides. The nicer one and the less appealing one which is usually hidden from the visitor’s eye. What surprised me in the touristic area was the heavy traffic presence. But, hey, this is Asia, and I better get used to it! The pedestrian zone doesn’t exist even at the Jonker walk. This city is small and a weekend is basically enough to see all the main attractions in Melaka. 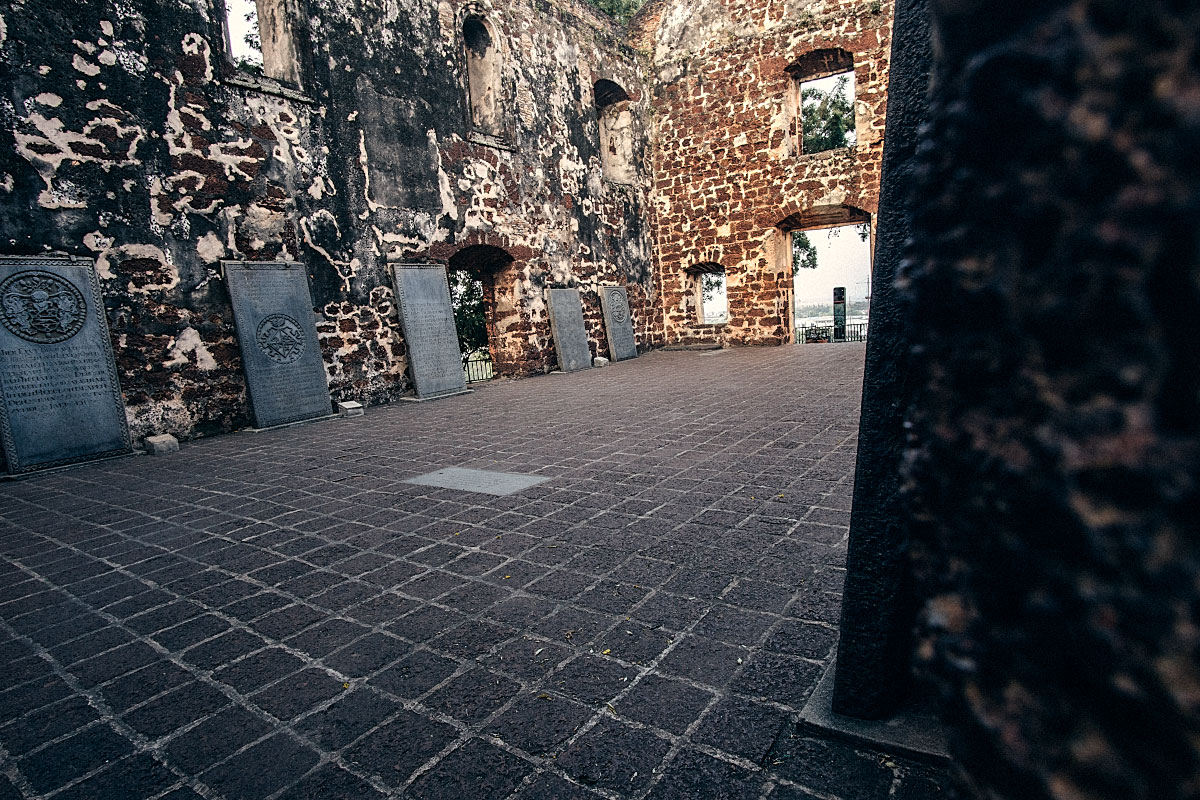 St. Paul's Church where is your roof? Main attractions are here by this well

When we were heading towards the gold-domed mosque, we passed the large building site. Actually, all the area seemed to be under construction or closed. It felt like a ghost city. In 99% of the buildings, the ground floor was closed. Later, we found out that they were planning this area to be the hit place for tourists in five years’ time. Now, the rent is cheaper, and people rented the place in advance. Once they had done that it seemed that they forgot about it. No one comes to let the fresh air into a store or to tidy the entrance. I wonder how the forgotten shop will look like in 5 years’ time. Of course, if the plan will fulfill the investors’ expectations. 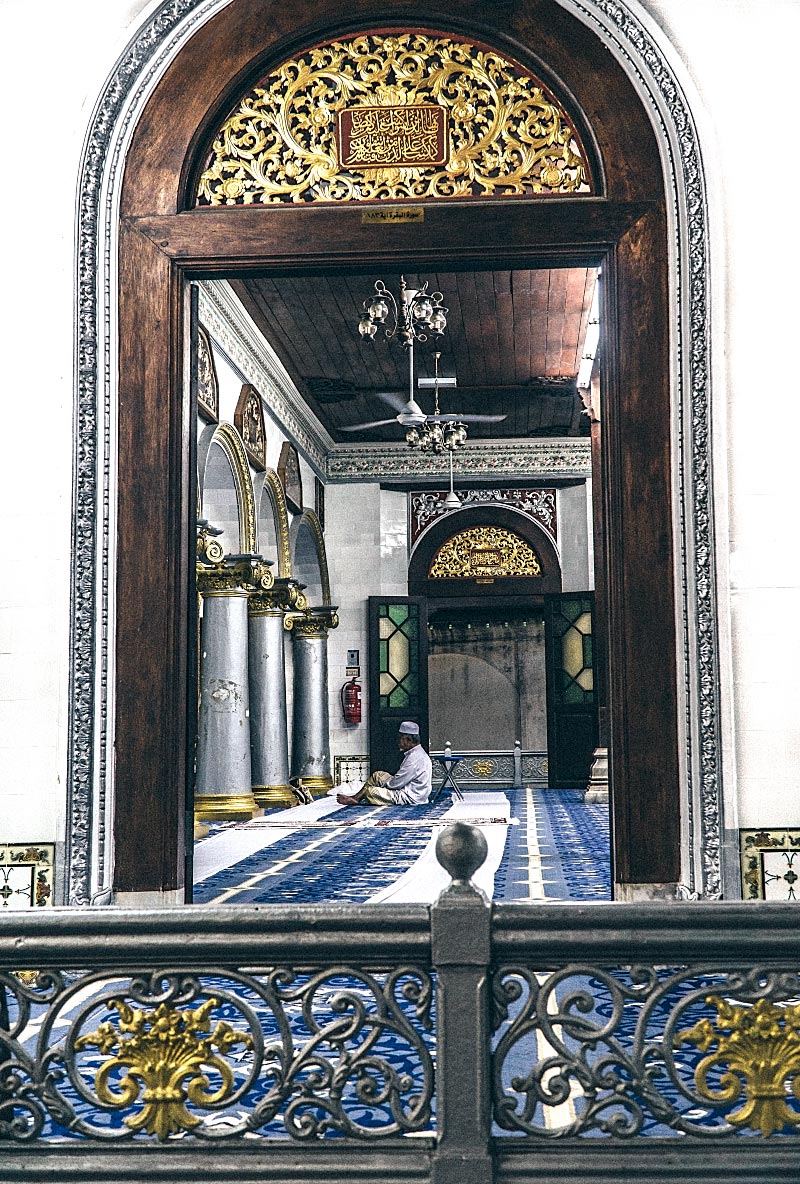 Some prayers for better tommorow or for cars free walking zone? The house is dying

To be honest, I don’t see Melaka appealing. The seaside is not tempting at all. The beach looks to me as if someone put the rocks together to protect the land. And the sea is dirty. The only thing I enjoyed about this “future hot spot” area was to watch mudfishes, crabs, and birds from the bridge. Sadly, people throw garbage all around that little area, which is being left to the wildlife for now. However, I’m skeptical about how long people will have the pleasure to watch mudfishes jumping, and fiddler crabs hiding. Not only because of the garbage, but also workers who destroy the mangroves and level the terrain. To be honest, that was very disturbing to see. 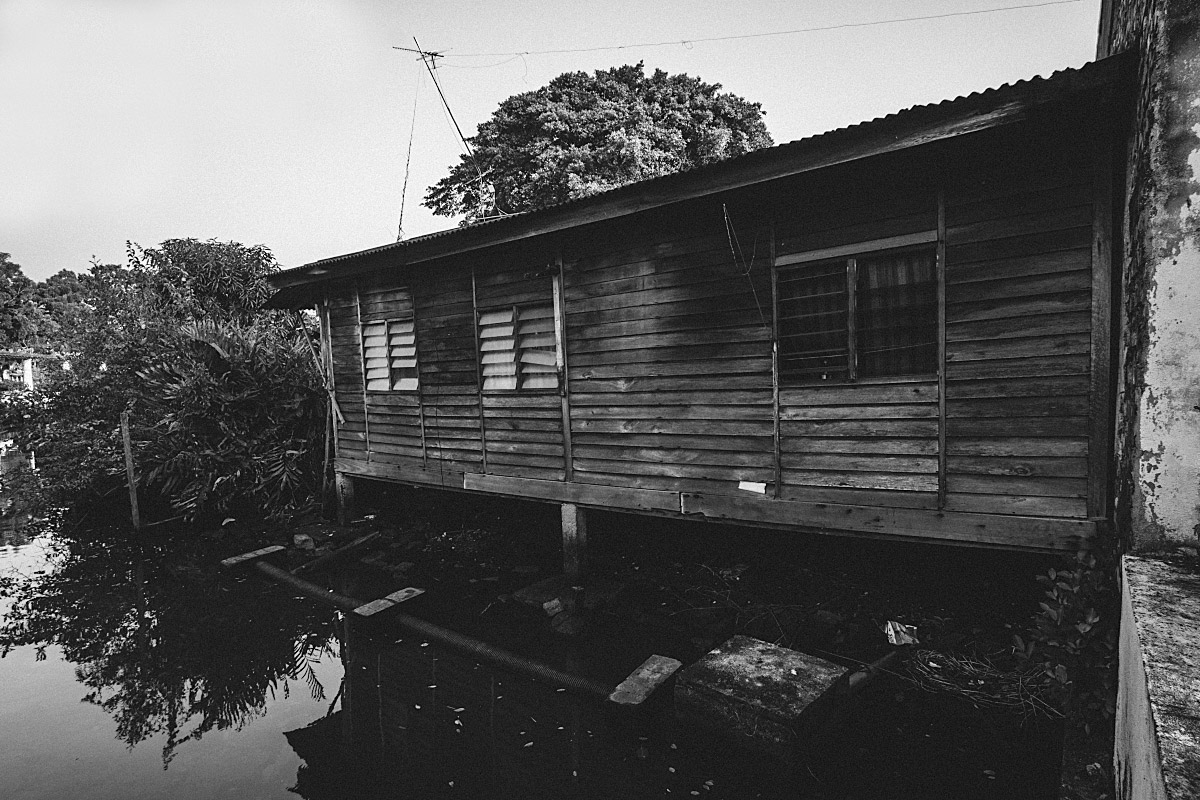 Another disturbing thing is that the city has plenty of empty charming old buildings that are disintegrating. Those buildings are also close to the Unesco Heritage sites and if they renovated them Melaka would be a nicer looking town. In my opinion, they are worth saving and yet they keep building new ones. Speaking of investing… The pavements are in a desperate need of attention. They are dangerous to walk on, as you never know if the concrete block will give in and you will land in the sewage. It’s not rare to see some missing blocks and some shoes inside the hole. If the pavement is solid, you’ll have to avoid the signs. And to do that you are forced to step on the road. And there is another dimension of the pavements: the smell… In some parts, it’s terribly smelly. Maybe that is another reason why the locals use cars just to cross the road. 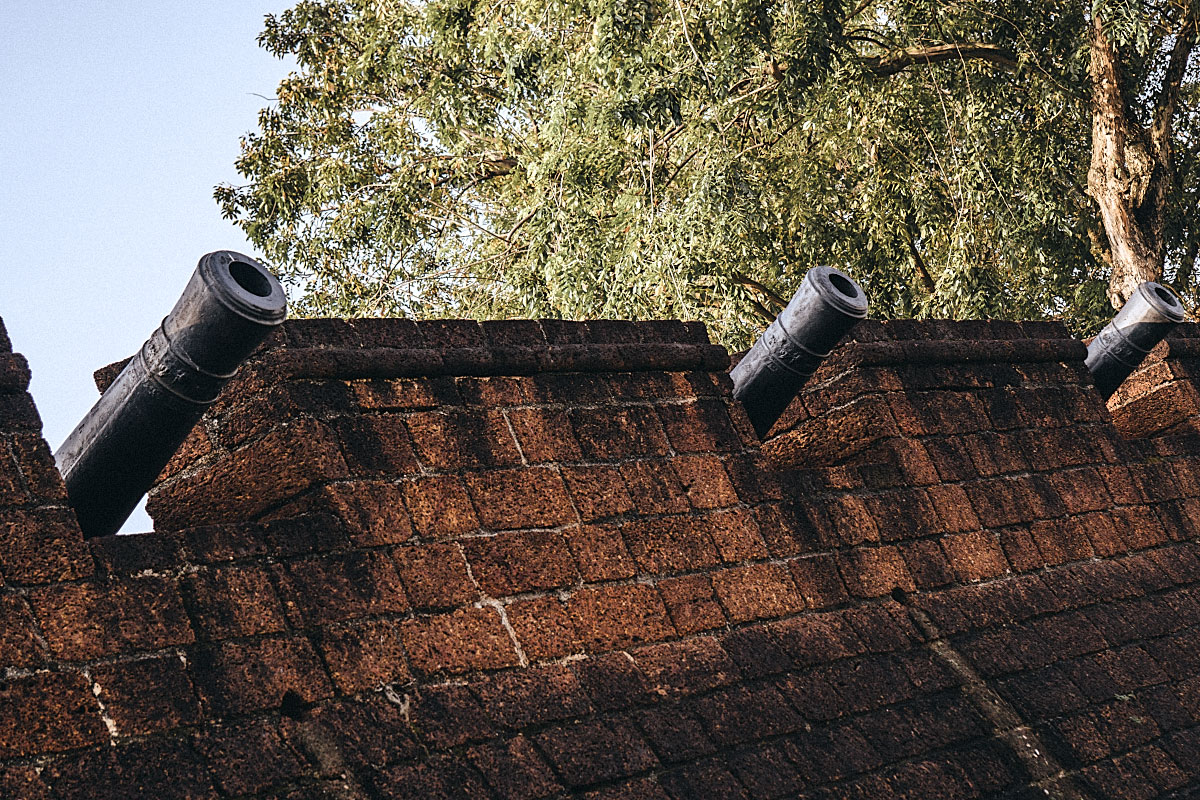 We found even some street art. Well this is instaspot. Ian was bored as hell. But hey I forced him to make this one. It is nice!

Some say that Melaka is a peaceful city. However, I’m not so sure about that. During the day there are cars everywhere and at night they like to drive very fast. The first few nights I woke up quite often, due to loud cars or motorbikes. In this city, they are obsessed with personalizing their cars. I have never seen so many customized cars with different accessories. I have a feeling that spoilers and alloy wheels are a must. However, they go further with stickers, stylish pointy screws, fuel doors… you name it! Oh, and most of the cars are under 65hp. Fast and furious: entrance level. 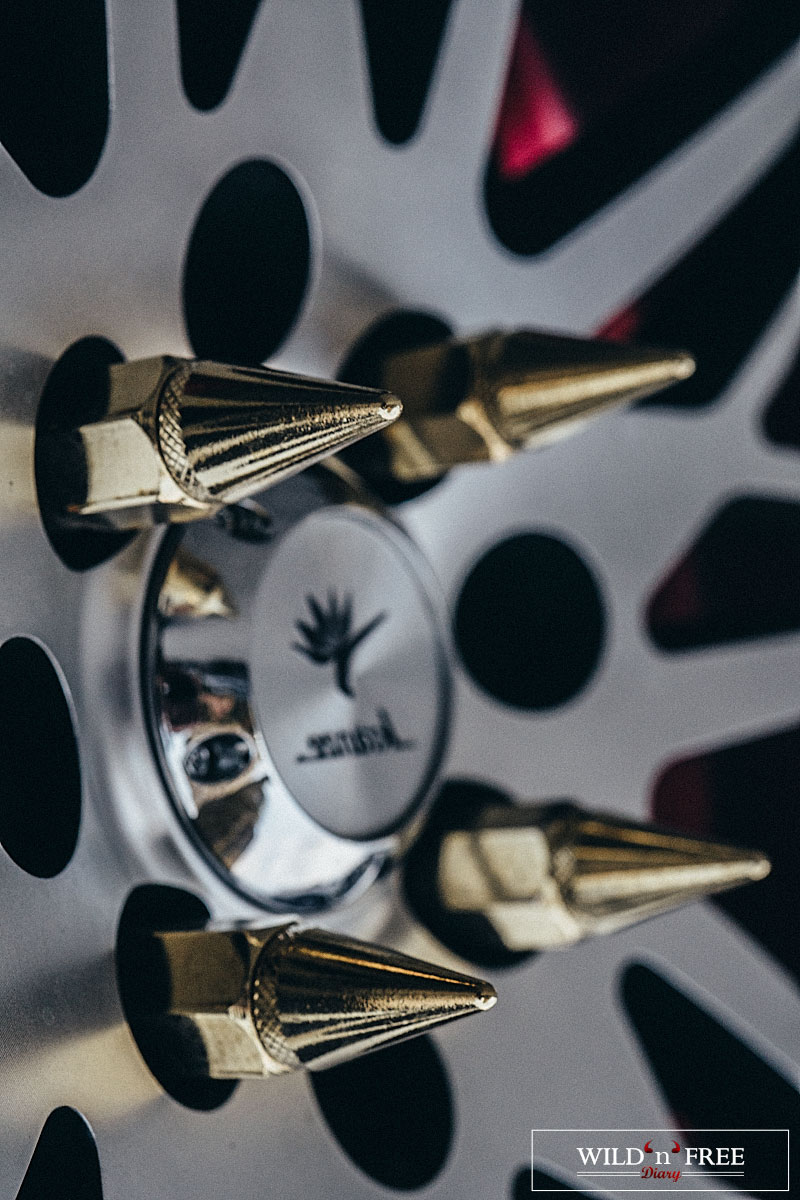 But don’t worry… I’m not one of those people who complain about everything and their holidays are ruined because of a runny egg at breakfast. After all, Melaka is under UNESCO protection. There is still some charm in those nice old buildings and they are worth the attention. Our favorite part was by the river, where there is a calm feeling and we took nice walks right there. Thank you for your visit.

If would you like to check our last 5 travel posts, please be our guest.

MELAKA IS A CITY WITH FULL OF POTENTIAL WHY YOU SHOULD VISIT CLOUD FOREST, FLOWER DOME AND THE OCBC SKYWAY IN SINGAPORE THE WORLD IS DYING AND THIS IS NOT MY PROBLEM! Ah no. Sorry for your disappointment

I didn't like Melaka either. Seemed touristy and tacky. The only thing I liked was the karaoke on Jonker Walk with the big stage and old local people get up and sing. That made the Tiger beer taste better.