The Treasures of small pieces in Sinan Shipwreck. The smaller, The more beautiful.

There were lots of relics displayed in exhibition room. Problem is that there were too many treasures to display properly for the tourists.

I had spent several hours in the exhibition room for Sinan Shipwreck. It was the treasures were originally made in China at the age of Yuan Dynasty. As you know, Yuan Dynasty was built by Mongolian. So I was interested how the conjunction between the culture of Mongol and the traditional Chinese was expressed.

Koryeo dynasty could continued the history of the Kingdom. But it was not easy to trace the influence of Yuan dynasty. So the relics of Sinan shipwreck attracted me of my curiosity.
It was known that the evidences of Mongolian invasion was left in JeJu Island. But there was nothing special as the traces of Mongol.

The relics were dispersed in several exhibition room. So it would be difficult to appreciate the value of the relics.

I’d like to introduce the relics on my theory. Let me show you small pieces at first.
There were too many things to find out the meaning of the relics. Even though I am not specialist on the porcelain or the archeology, it would be easy for you to classify the relics according to a certain standard.

While reviewing the photos, I thought the size would be an option.

There were so much small pieces of relics, but they were randomly displayed here and there.

There were several kinds of small pieces.
What I’d like to introduce to you first is the water bottle for grinding the traditional ink. As you know, in north east Asia, the brush writing have had a special meaning. Calligraphy was not only the mean to write but also the profound art by itself.

There were lots of style in the water bottle. It’s size was about 5 cm.
Each water bottle seemed to have the desires of the people who had lived at that time. 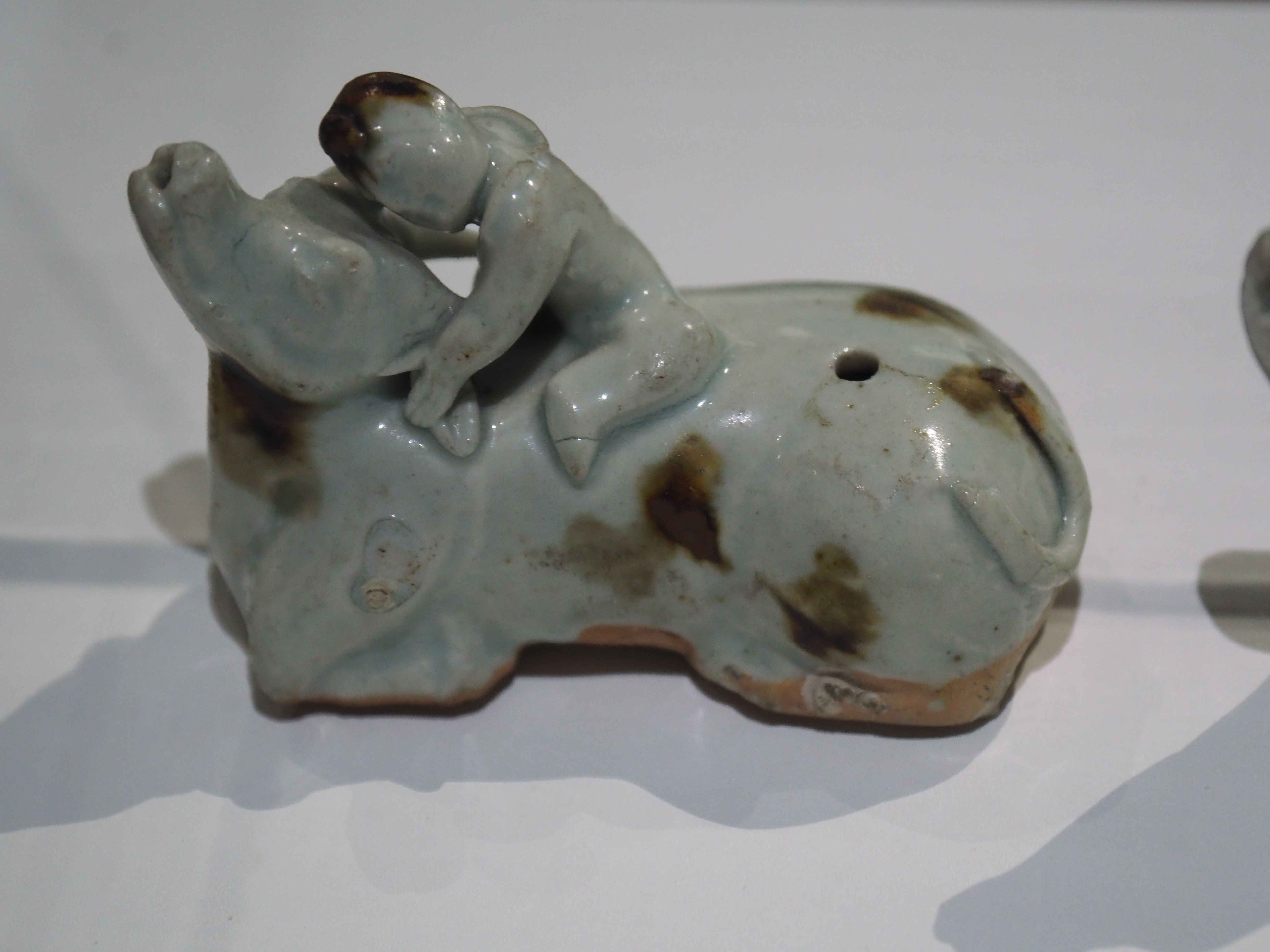 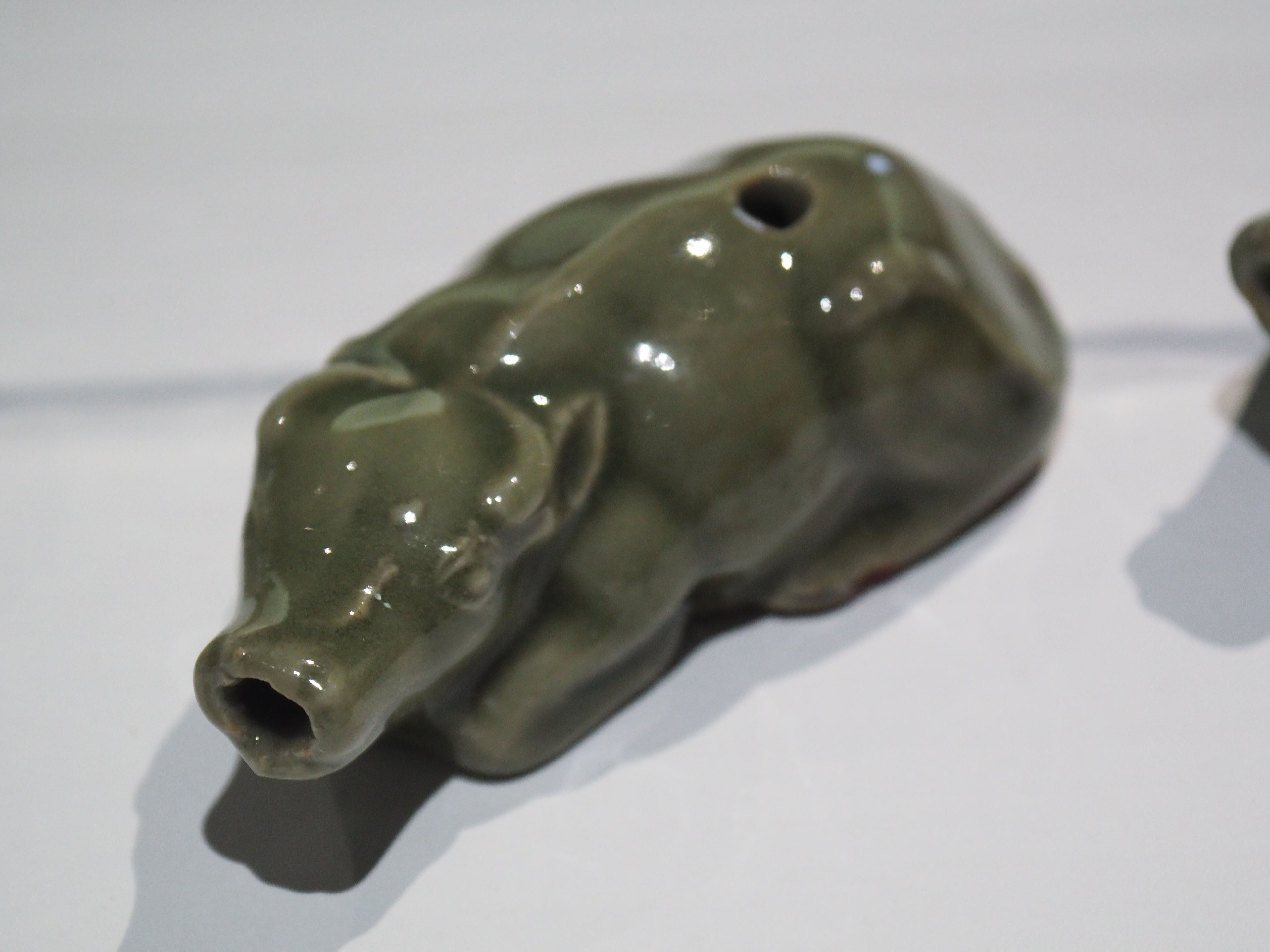 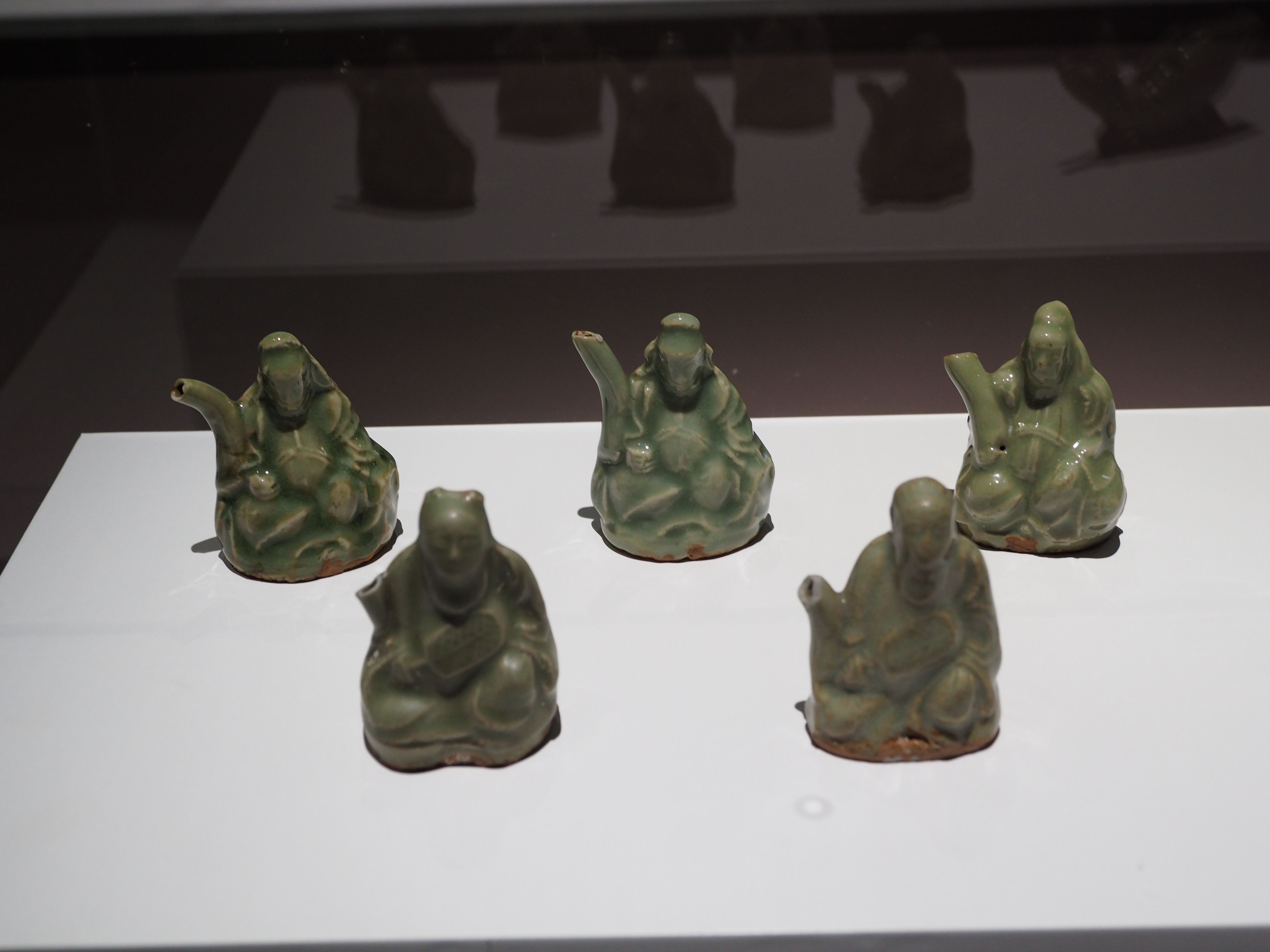 What I’d like to show you next is small delicate figures.
Small figures were so beautiful, it’s size was as big as 3-5 cm. It’s delicate appearance was marvelous.
These figures show you the level of their craftsmanship. 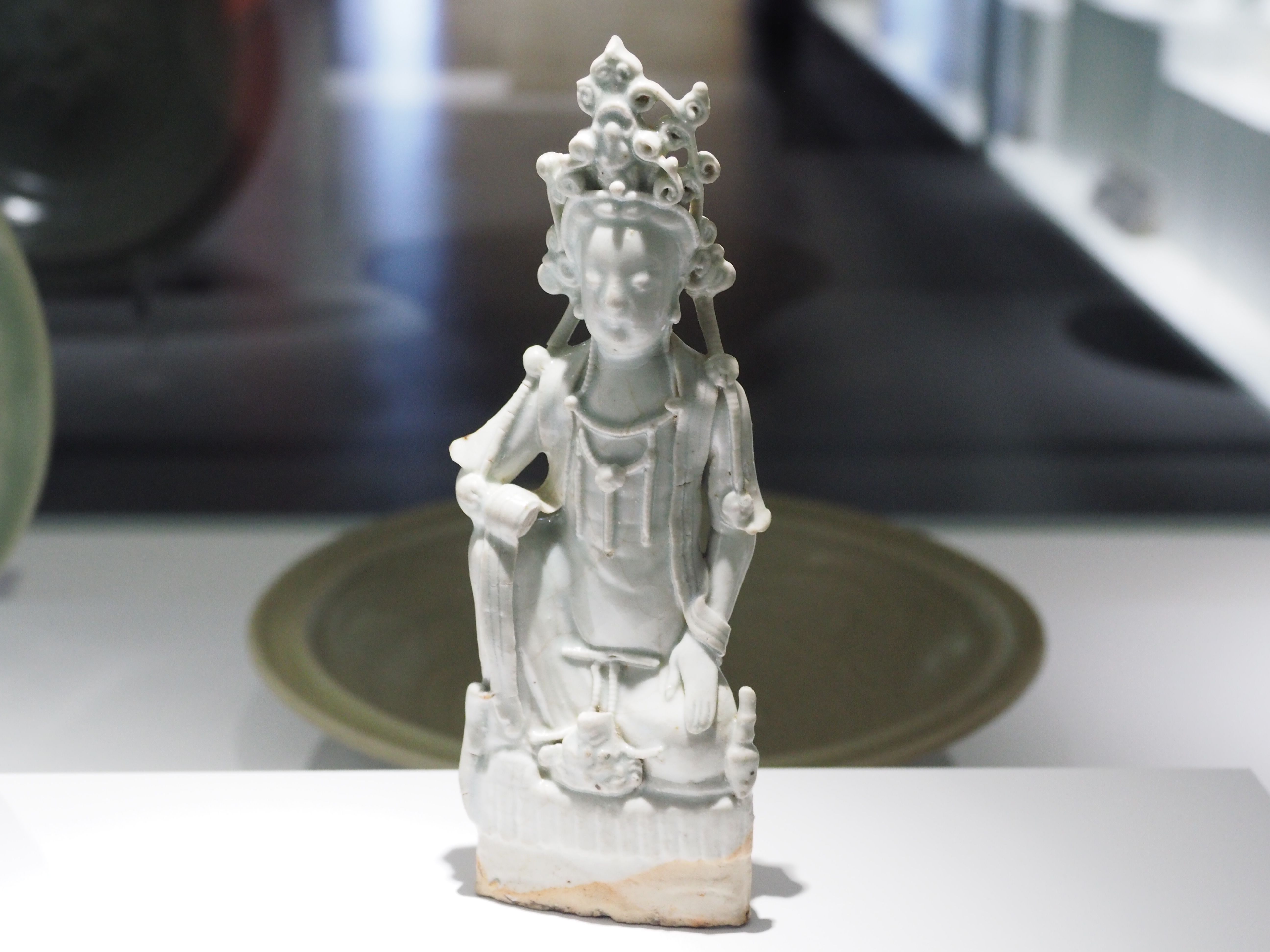 In other hands, there were lots of small figures which were made up of the soil.
Due to the long period under the sea, the appearance of figures was erased partly.
It was unknown for it’s usage. It could be the religious ceremony or the toys for kids.
Anyway the erased faces were something weird. 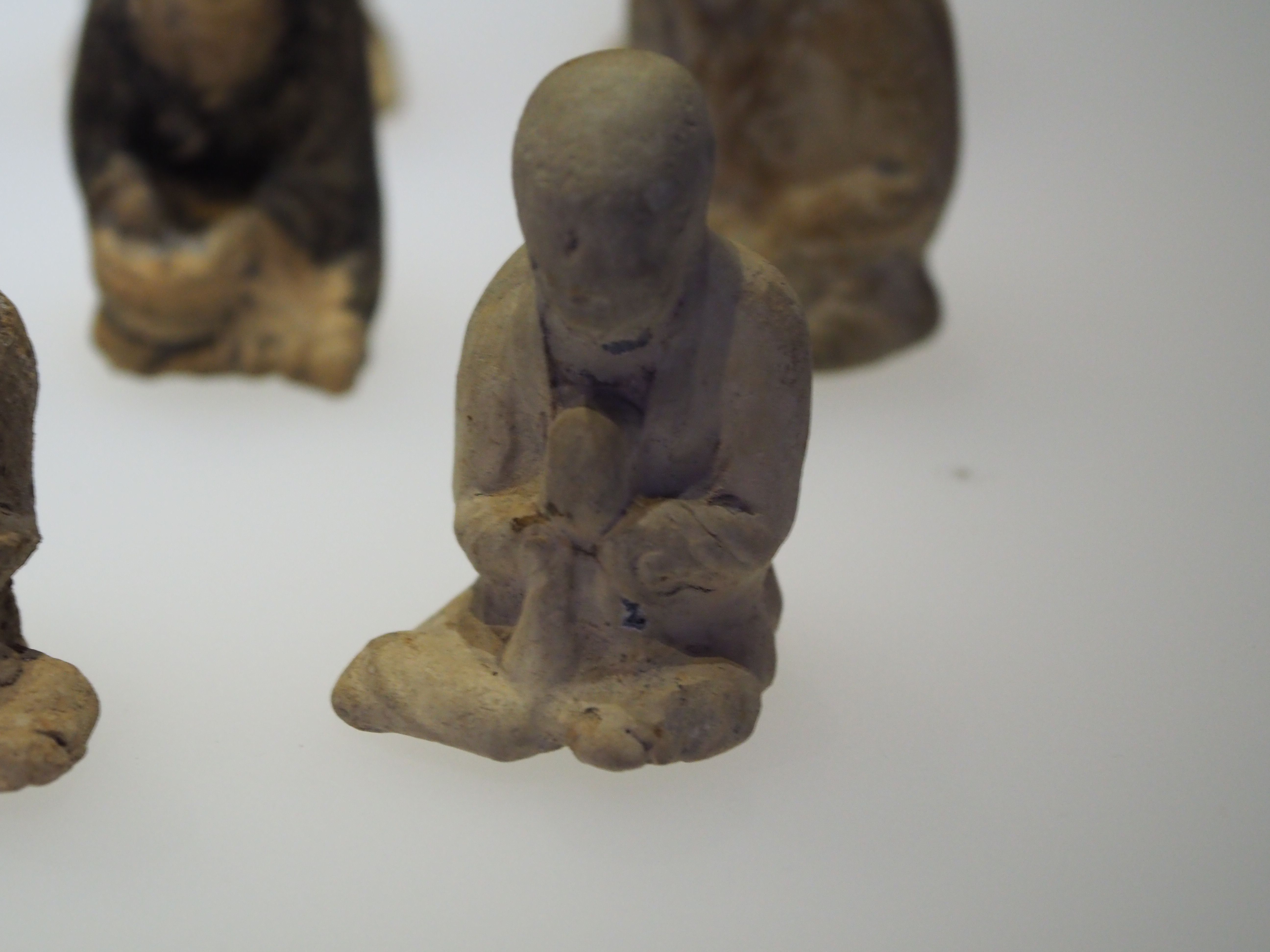 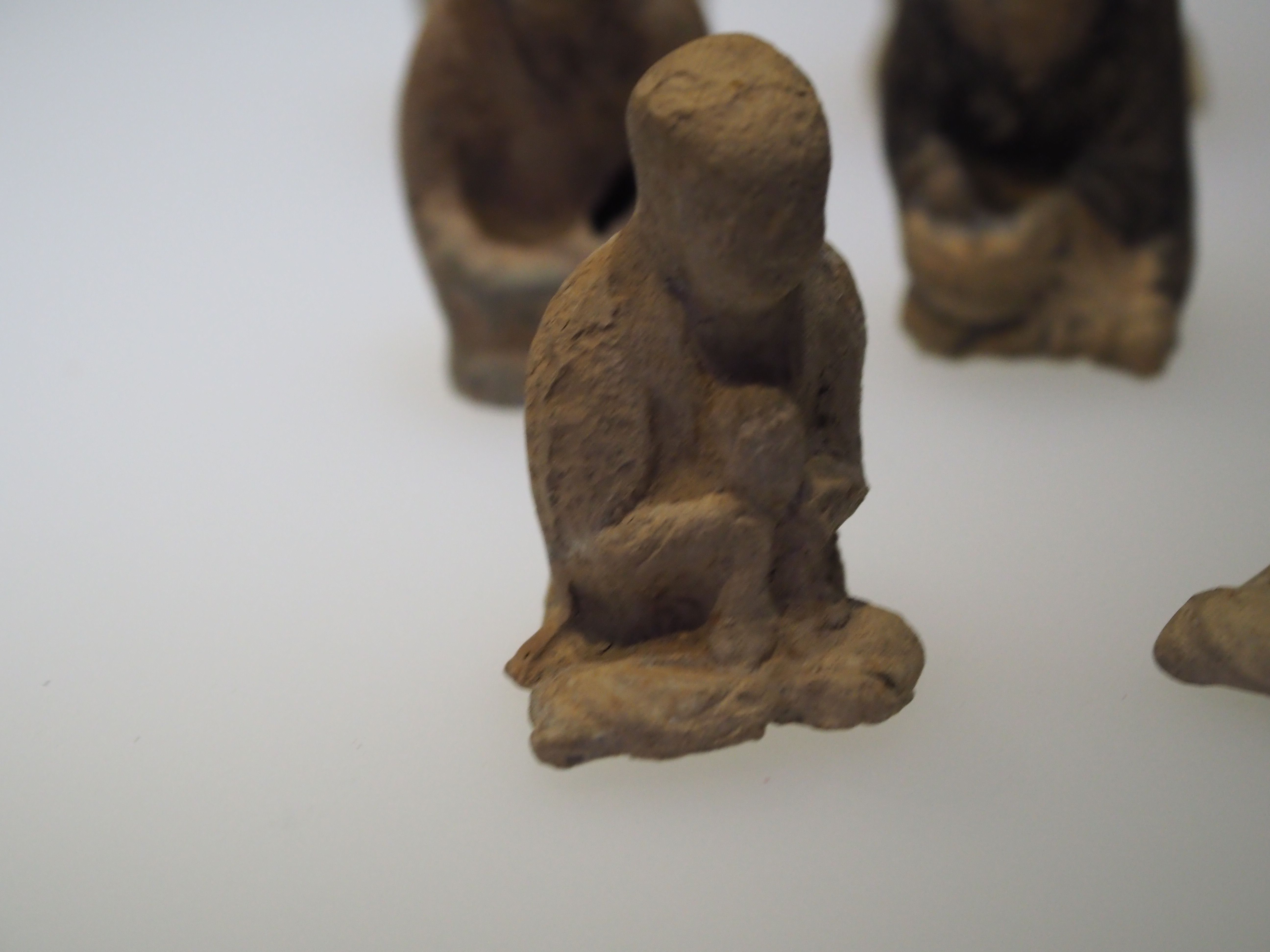 Smaller the more beautiful and also most of the times most valuable!

Yeah, who wouldn't . They are attractive to the eyes. They will be of great value

what a nice piece of rare treasure

The Chinese and Korean cultures @slowwalker are very rich in history and the Dynasties and Influences from outside like from the Mongols had made their societies diverse in knowledge as reflected on how the artifacts from those era is showing to us to learn about and admire.

Yes this is very true. I have read about the Chinese dynasty and their history and I can say that they have a very interesting history. and their well structured society allows for preservation of this beauty. and their battle strategies are amazing. applying same strategies in business will definitely make you stand out.

At first I thought they were toys

Nice details, must have taken some work:)

It's so interesting learning about the history of different cultures. Thanks for sharing.

Very interesting.
About the relationship the Chinese and the Mongols I do not know. And worn face... if not by accident.

This is so nice. I now have another knowledge about the relics. Thumbs up. I love it

There is a lot of detail in those figures they look amazing.

Wow.. That's some amazing relics there... I'm more impressed with the ceramic artifacts.. So sublime. .
And the level of craftsmanship is top notch ..
Wish I could visit one of those tourist attractions..

If you edger to know about blockchain then this post is 4 uhttps://steemit.com/blockchain/@fxfighter/preface-of-blockchain-part-01

@slwwalker it's so interesting to read your posts. What shoud I do if I want you to become my curator?

"Small" things really became the new trend of the world ^^

wow beautiful itz so nize amazing. im really impressed and thank u so much for upvote

Anyways thank you so sharing such a beautiful history!

This yes a beautiful piece of art

Delicate figures are more beautiful than the water bottle, but I wish I had one like a baby with the cow.

Very interesting and Educating post,
I ll love more of this.

wow... it is very educational and knowledgeable details to me. thank you for sharing this with us. and also beautiful images are there..

Wow! These are really amazing. It exposes a great level of beauty and craftmanship. Although they appear small, yet they still look wonderful. Kudos ! The photographic details are great.

The erased faces are indeed very weird....
The pictures are really beautiful and I definitely agree with your quoted idea....The smaller, the more beautiful
Thanks for sharing.

Less is more, at times. After Japan, looted all the national treasures of China, Korea, etc. and never returned them, it nice to see, they didb't get them all. Perhaps things happen for a purpose we don't yet fully understand? I enjoyed your post very much.

I'm not good at photography but this photos looks good to me :)
It is a pity that there are no such things near me

Yes that's why you would appreciate them more. The more familiar get with it the less you value you accord it.

hi very interesting your pots, was a great job i love it. 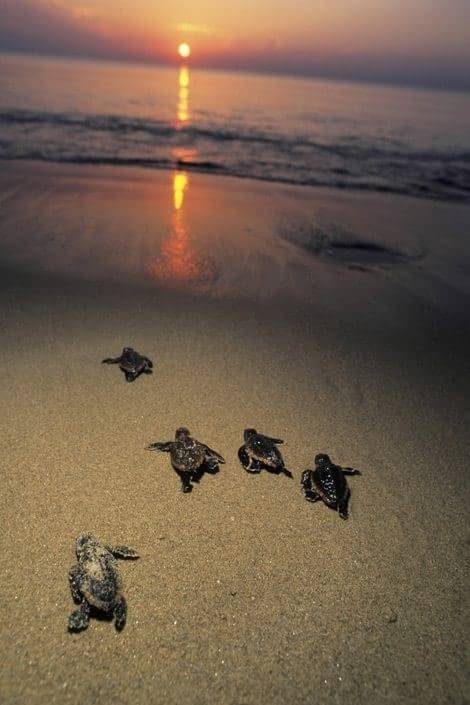 The craftsmanship is amazing! Great pics, and great read!

A lot of relics of history, in place in Aceh I also have a lot of chinese heritage in the period of Ming's dinasty

a very good story my friend, and I am very happy to read it, and history that should be memorable, success is always a friend

Great relics there. So, where is this exactly? btw thanks for the upvote on my Punch bowl post!

The human soul is hungry for beauty; we seek it everywhere - in landscape, music, art, clothes, furniture, gardening, companionship, love, religion, and in ourselves. No one would desire not to be beautiful. When we experience the beautiful, there is a sense of homecoming.

Have really been enjoying these post my friend! Brings me back to a time and a place. I recall one of my favorite museums in S Korea being the dinosaur science museum. Full of all sorts of great dinosaur bones and more! But these kind of museums are great and so rich in Korean history! Keep up the great work! -Dan

that relic are pretty awesome, on that last pictures those are made by pure clay sir @slowwalker!

They seem to tell of a deeper story :)

The ceramic are all fantastic ....I really love it how many more can be found in sinan

This makes me want to visit a museum soon.☺

I heard that the symbol of 'Twin Carp' shows all East-Asian area were affected by ancient India. So it's so interesting to me. It shows we all effected each other in Asia.

Now these are some real find. Awesome

Woow! It's very interesting post @slowwalker! The quality of detail in the figures is increadible. Thank you for sharing. Now I know more about East Asia culture.

By water bottle do you mean ink bottle?

Excellent one - I am also totally into the topic - China and Mongol culture having influenced a lt regions. My other half is from Bulgaria and the Mongols been there also a bit. My wife is a little Mongolian which I tell her every day - very impulsive like
Dschingis Khan - so you get it, I am more into finding out living people and their influence versus relicts - but a fantastic topic!

Thank you for sharing! I love ship wrecks and historical artifacts! Kind of beautiful these relics looks. they remain witness to some horrific events.

Those are wonderful art pieces. It’s really nice to know the history of various items, which are probably not considered as valuable in the past but now viewed as priceless because of the culture it possess.

True as you say, the smaller the property looks more beautiful ,, but I am curious about the erased face ...
Why is that ..

Very informative post, Photographs of relic take us in the past age

i agree with your opinion

The small pieces are looking nice and small
Lovely adventures

this deserve to get a higher upvote. thank you for explaining this important piece.

This sunken ship from the Yuan Dynasty, so many magical treasures, I believe that every treasure has a story, looking forward to the next article you post .thanks for your hard [email protected]

Beautiful craft. I am everytime surprised what amazing art human being can create.

Very interestingly written. thank! On much and didn't know )) myself love such work

Very creative post. It help some of us to see something beautiful without visit. Thank you too @slowwalker for make a great effort to watch and learn something new.

This is different, and so kind hope all people like this

From where i can buy the last one? surely this object has a long history, and has a very valuable meaning for the china ... certainly with a very old age and still memorable.

Hi @slowwalker........ please see my post on our friendship. 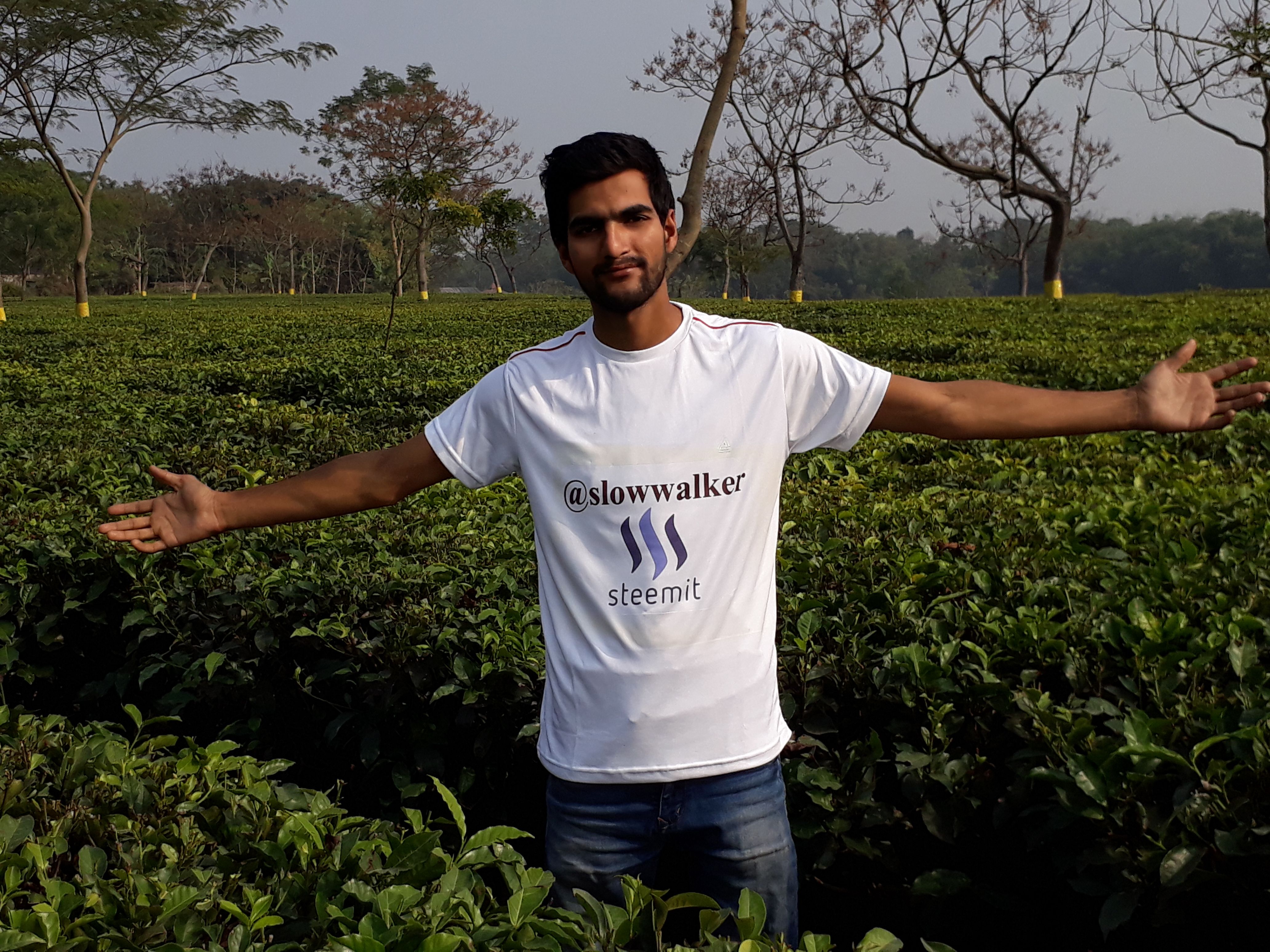 Hi @slowwalker........ please see my post on our friendship.
https://steemit.com/slowwalker/@lachitsarmah/a-small-surprise-to-my-friend-slowwalker-079bed578a6a4

This must be antic

I think that the works for the upper class reflected the preference of 'Yuan Dynasty'.
Thank you for your posting.

Huuuh, and someone think history is boring. Great to show them wrong!