Do you know the feeling of deja-vu? I had it in Yosemite! Let me tell you about that trip. It was in the middle of the winter, but California showed no signs of taking winter seriously. I got my car and went away for the weekend. Off to Yosemite...

"Do you have chains for the snow?", someone asked me... It was 20 Celcius (68 F) in San Francisco. I was confused. "You will get a massive fine if you don't have snow chains in Yosemite". I checked the trunk of my rental and realised I was fucked. But me living on the edge, I crossed my fingers and went anyway. "I'll probably be able to buy some snow chains in a gas station on the way"

I was driving and getting closer and closer to Yosemite and no snow whatsoever. But on the few stops that I made, I noticed it was getting colder by the minute. Only one hour to the hotel...

Half an hour from the hotel, I started seeing some snow on the shoulders. The road was clean though... And then it happened. It started snowing. The further I drove, the more snow I saw around me. I was almost at my hotel, but what to expect? For now, it seemed safe enough without chains, but will it stay that way?

5 Minutes from the hotel, the road was covered in a layer of snow. The roads were still not slippery and I kept my fingers crossed. I was going to make it to the hotel without being snowed in, for sure! "But will I be able to drive back Sunday evening?" 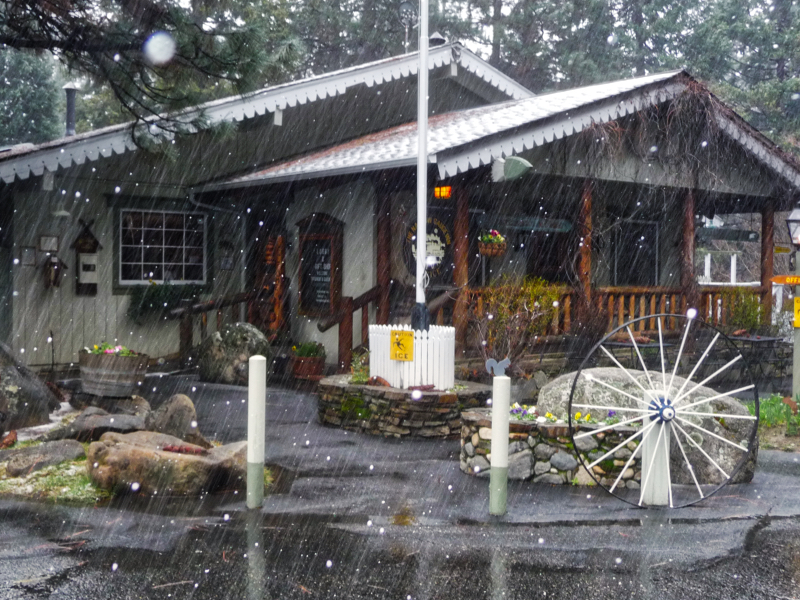 I checked in at the hotel, where they told me they thought it was better not to go explore with my own car while it was snowing. And I agreed. So I booked a day tour that would pick me up at the hotel in the morning. While I was there waiting, I learned a few things: If people ask you if you like a waffle, order only 1. They are massive in the US 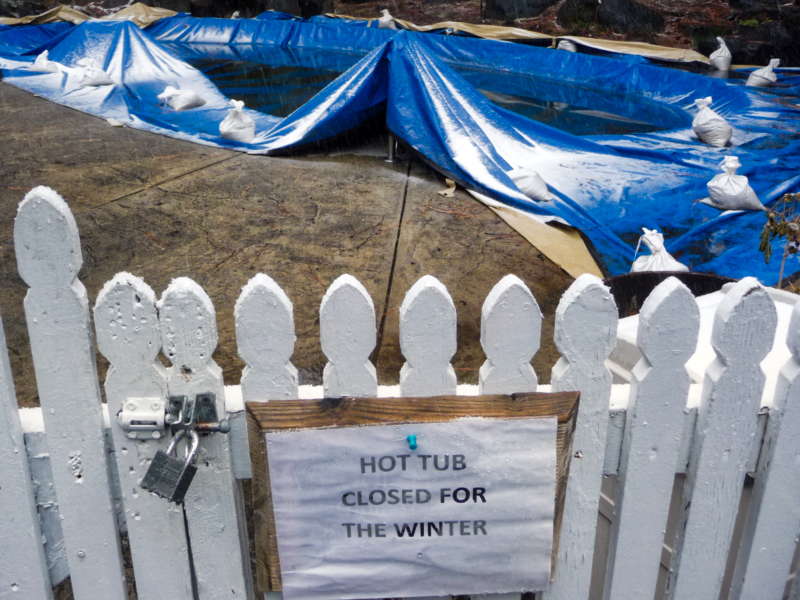 Hot tubs are closed in the winter, just when you are most cold

The day of the tour was there and it was already clear that I could have done it with my own car too. But it was fun to be with a group for once (I travel alone 95% of the time). And so I got on a bus with an amazing Yosemite loving bus driver/tour guide. First stop: Mariposa Grove. 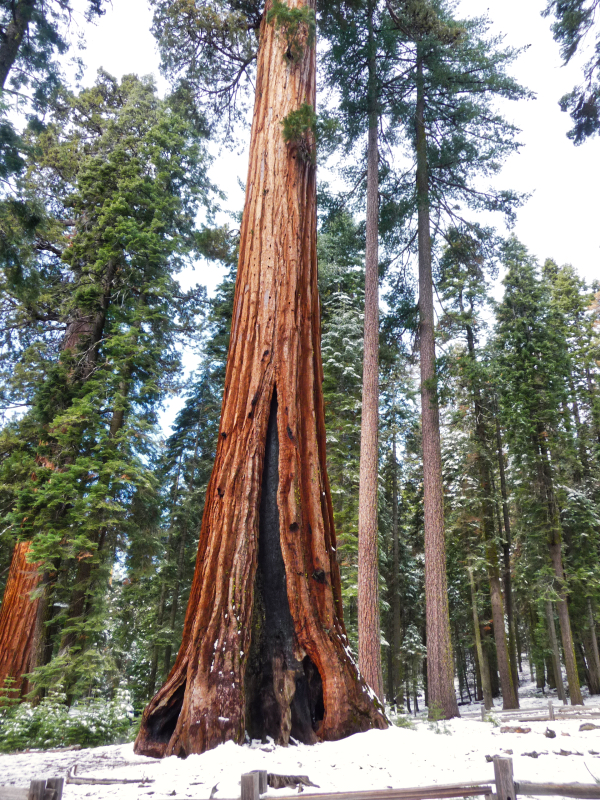 As you might realise by seeing these photos, Mariposa is a sequoia grove, with some pretty impressive, old and sometimes famous trees. We started in the part that had mostly younger trees. The guide explained to us that the oldest tree in the park (Grizzly Giant) was about 2000 years old. It survived many forest fires. The larger/stronger and older sequoia trees are almost fire resistant with their thick bark protecting against fires. They get old like this because they are made to survive. They grow fast and strong, so no storm can knock them over. Fires won't harm them. And if they get hit by lightning, they just keep growing around the damaged piece of the trunk. It doesn't need the full trunk to be healthy. And this is the reason many "drive through" trees are still super healthy.

Just a short walk from the parking lot, we would run into a massive fallen tree. The "Fallen Monarch Tree". Before you continue reading below these photos... make a guess when you think this tree fell over? She isn't that tiny 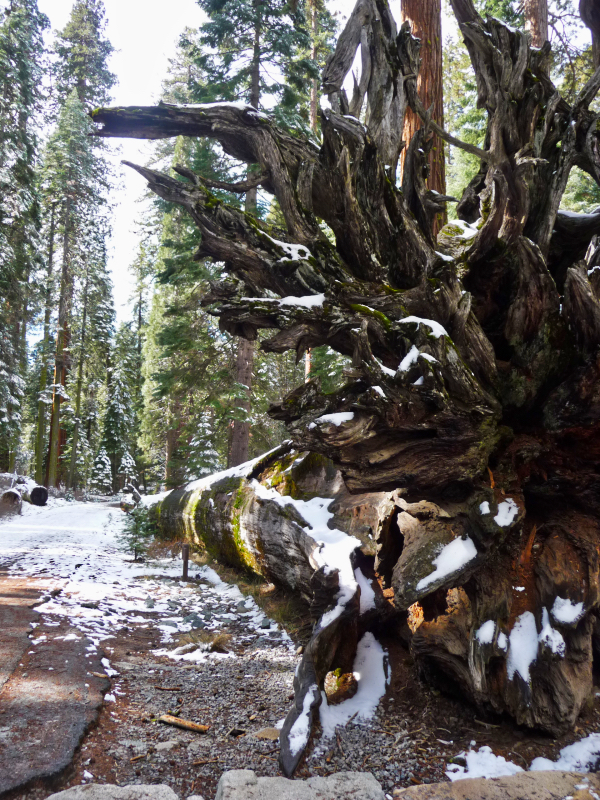 No end to it Okay, so considering there is a photo of the tree with the Cavalry from 1899, it must have been lying around for at least 100 years now, right? The assumption is that it fell over 300 years ago. And these trees are so resistant to decay, that it is still here and will be here for quite some time.

Unfortunately, we didn't have much more time in Mariposa. It was time to move to Wawona. This is the location of the Wawona hotel, a Victorian style hotel from 1876 (now renamed to Big Trees Lodge). Next to the hotel, you will find the Pioneer Yosemite History Center that is more interesting. An old covered bridge will bring you to a field with a collection of historic buildings from Yosemite. It was so cosy that I wanted to live there (until I figured out there was no wifi there). 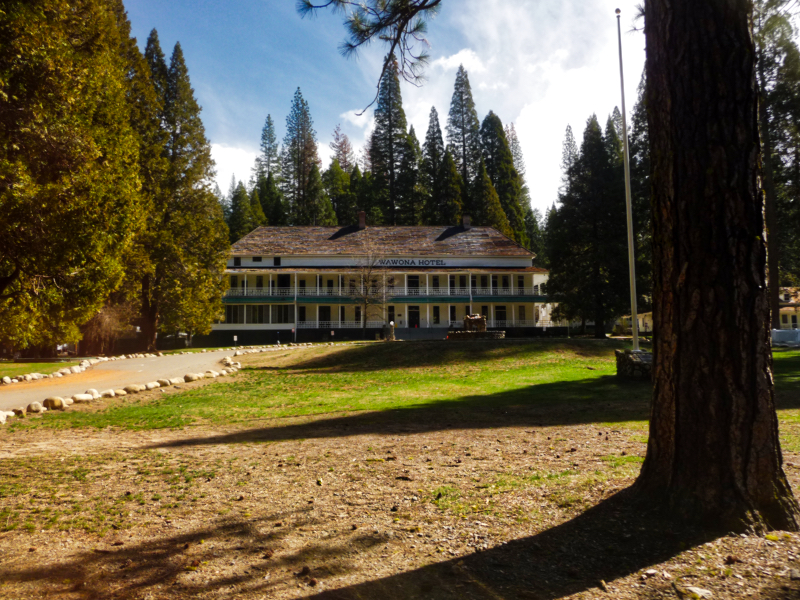 But I wasn't in Yosemite to see old buildings and not the most super old trees. I wanted to see waterfalls and amazing views! And so it was time to grab some lunch in one of the best spots possible: Yosemite Falls. We walked on a lane towards the waterfall with massive trees left and right. And it was time to feel tiny. This waterfall is 739 meters high, divided into three sections.

It was busy at the base of the waterfall. Many people tried getting as close as possible to the water. This seemed super dangerous with the moist and slippery stones. And since I wasn't wearing the best shoes possible, I decided to not risk it ☺️. 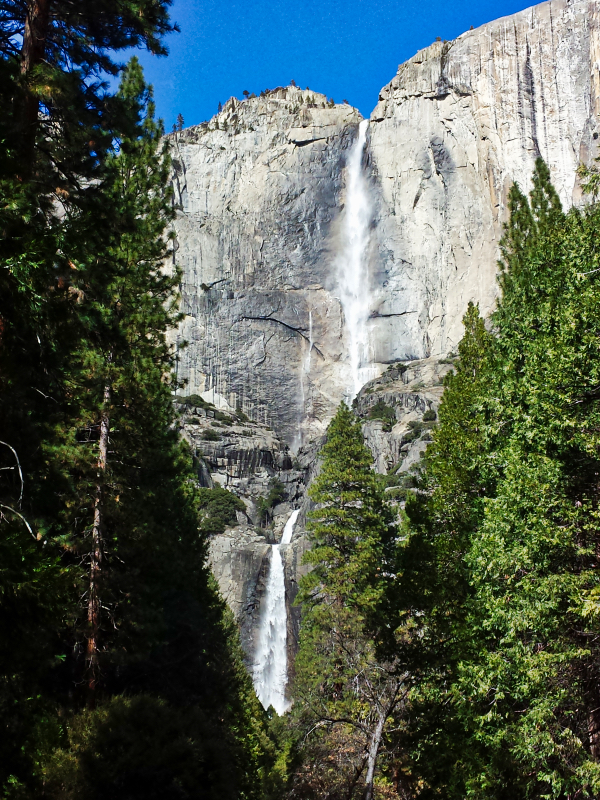 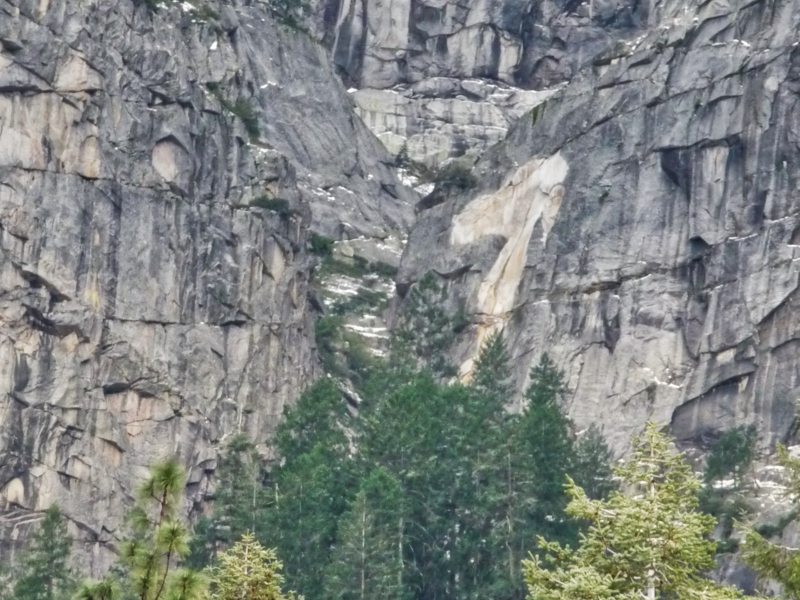 "Look!!", the guide said, "Can you see Snoopy?"... He sounded like he had completely lost it (it was an old man already). We looked out the window but didn't know where to look. He stopped the bus and pointed in the direction of the cliffs on our way to Bridalveil Fall. So let me ask you:"Can you see Snoopy?"

For the next photo, I need to warn you not to look directly into the fall or you will be cursed. Or at least, that is what the Native American believed. It is one of the major waterfalls of Yosemite and it might be more familiar to you than you now realise. It was time to move to the most amazing view of Yosemite. The place where you can see both El Capitan (a huge rock formation on the north side of the valley) and Bridalveil Fall (and Half Dome in the distance).

First stop was the Valley View. Just to get used to the experience a little so that the shock wouldn't be too much. In the next photo, you can see the Bridalveil Fall on the right. I stood here on the banks of the Merced River that flows through the Yosemite Valley. 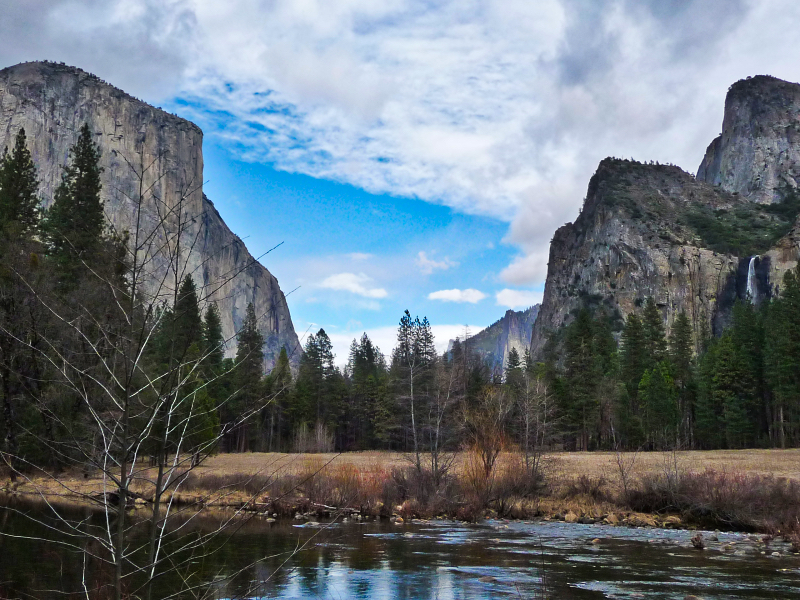 But the next stop was the Tunnel View. And there it was, my deja-vu! I didn't know why, but it all felt so familiar! The busloads of people queuing up to make a selfie on the edge of the viewpoint didn't distract me at all (NOT). But it was pretty funny to see behind the scenes with all the people standing there ruining a view 😎.
I know, I was one of them... 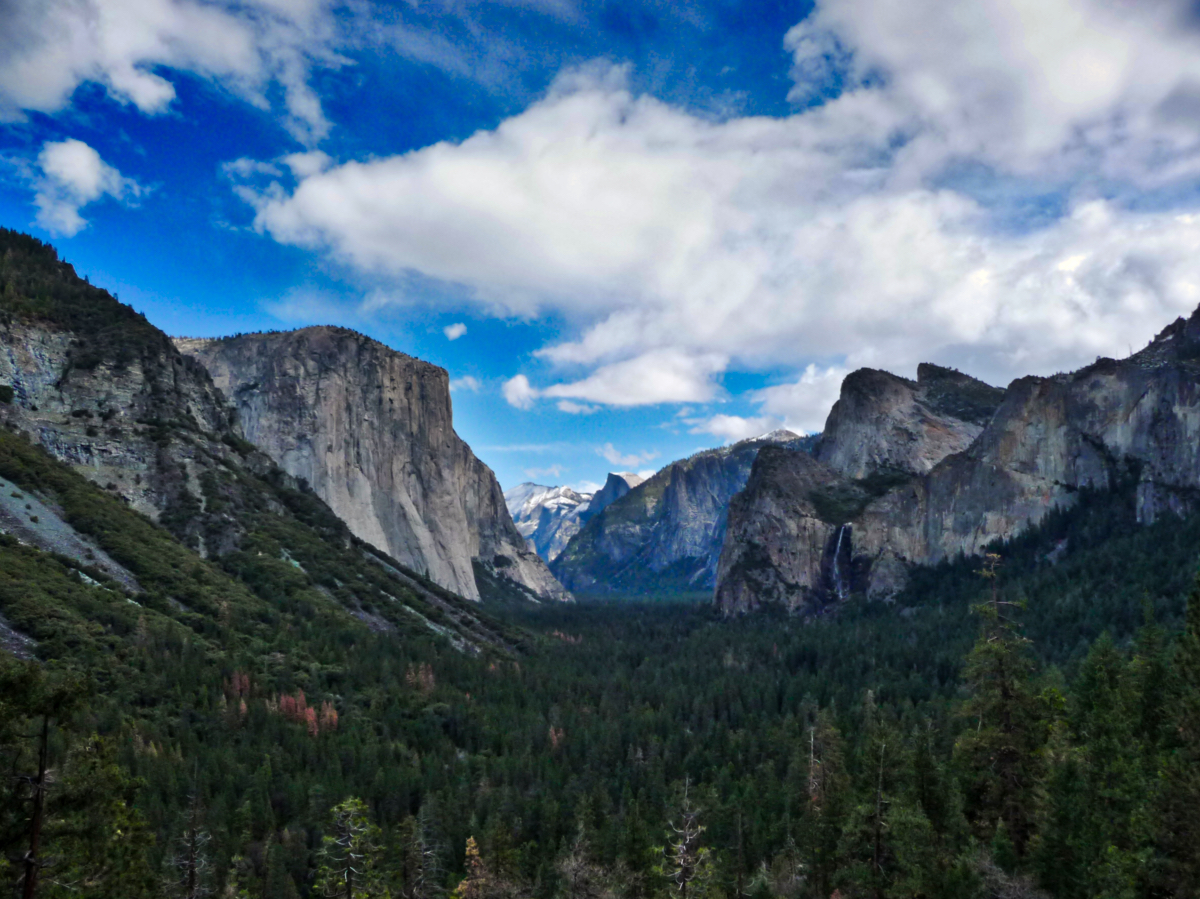 So there it was, the most majestic view that even has his own wiki page. Tunnel View with always that annoying one tree that is slightly too large for the photo. I took it in. Took a selfie... Took another look at the view. And got on the bus. Back to the hotel, so I could get my car to drive back to San Francisco.

Back in San Francisco, I was too tired to blog about it, but I wanted to post my selfie on Facebook quickly. I opened my MacBook and there it was.... My deja-vu!

For the sake of the story I might have changed the order of the photos a little, hope you don't mind ;)

Also in this series:

Yosemite is one of my favorite two-day hike in Cali. It was a while back when the movie ‘Blair Witch Project,’ was so popular and super scary. I remembered us trying to pitch a tent as it was getting dark. I couldn’t remember which was scarier; maybe the bears stealing food from our camp site or creepy scary dead people popping up inexpectedly.

Thank you for the memories. All of your photos brought it all back for me.

The idea of bears will keep me from ever going camping in areas that have bears!! I'll deal with zombies and busloads of dead people instead ;)

If there's one place in the US that I really really want to experience, it's Yosemite! It almost makes me restless not knowing when I'll be able to make it happen. There's so much to see and I can't seem to prioritize. :) I'd love to camp there! Love the pictures capturing the majestic mountains and the waterfalls.

It's just amazing. I'd love to have stayed there a little longer. Do some higher up hikes too. I missed a lot this way, but who knows!

I'd love to go to Yosemite one day. Next month we're planning on stopping in Joshua Tree, Arches, and the Grand Canyon. Hoping to go to Glacier in June (if Going to the Sun Road is open), and Acadia in September or October. It's my year of national parks, I guess :)

My dear friend,
excellent narration and wonderful photos. an amazing travel post.
I really wonder where it is. congratulations!

Awesome blog, those sequoia trees really are something to behold in person!

It is surreal how tall they are. Something you have to see with your own eyes! ;) Thank you!

Upvoted! saw your post due to travelfeed, great post, love the work you put in, just came back from California! well done Fellow Amsterdam Dutchie

California just has a tiny bit of my heart! Hope you enjoyed it as much as I did. But good to have you back in Amsterdam! :D

Yeah these places are so beautiful...I haven't been to the red woods in almost 30 years...damn I'm gettin old! I can't believe that tree is still there same tree laying down and posing for everyone to take photos! Cool.

It's only been a few years and I want to go back. How did you manage to stay away for 30 years? ;)

don't know really... too many places to see on this globe maybe! Damn planet has to be beautiful everywhere?

I loved it! The post, the pics anda that giant fallen tree!! It looks like such a dreamed place!

days without seeing anything from you deaar, you look really gorgeous, amazing fotography have a great time.

I don't have selfies all the time... but the stories could still be fun ;)

I upvoted your contribution because to my mind your post is at least 35 SBD worth and should receive 115 votes. It's now up to the lovely Steemit community to make this come true.

Hi.. Your post is very good, and I learn a lot in every post you that I follow. whether it is a photo or writing. Thank you for accepting me as your friend. I'm so glad .. And it's an honor for me if you would like to visit my blog..by @imranpase

Hiya, just swinging by to let you know that this post made the Honorable mentions list in the latest edition of the #TravelDigest!