A couple days ago I got a message from a friend who’s planning a trip to Colombia. He asked me for some tips because I’ve traveled through Colombia for 3 weeks back in 2014. His question started a trip through memory lane and especially the hike to the lost city came to mind. Ciudad Perdida is a ruin city located in the Sierra Nevada Mountains and once inhabited by the Tayrona Indians. It was founded around 800 CE, about 650 years earlier then Machu Picchu and deserted around 1500 when Spanish conquistadors landed in the area and plundered it’s gold.

The city can only be visited by helicopter or after a 4-6 day hike. The hike is about 42 km but goes through rough and muddy terrain so that’s why it’s a multiple day hike. We did the hike during raining season what means the mornings were mostly dry but at noon it started raining for the rest of the day and it was impossible to keep yourself dry. I didn't even try because the high humidity level made you wet from toe to top anyway. 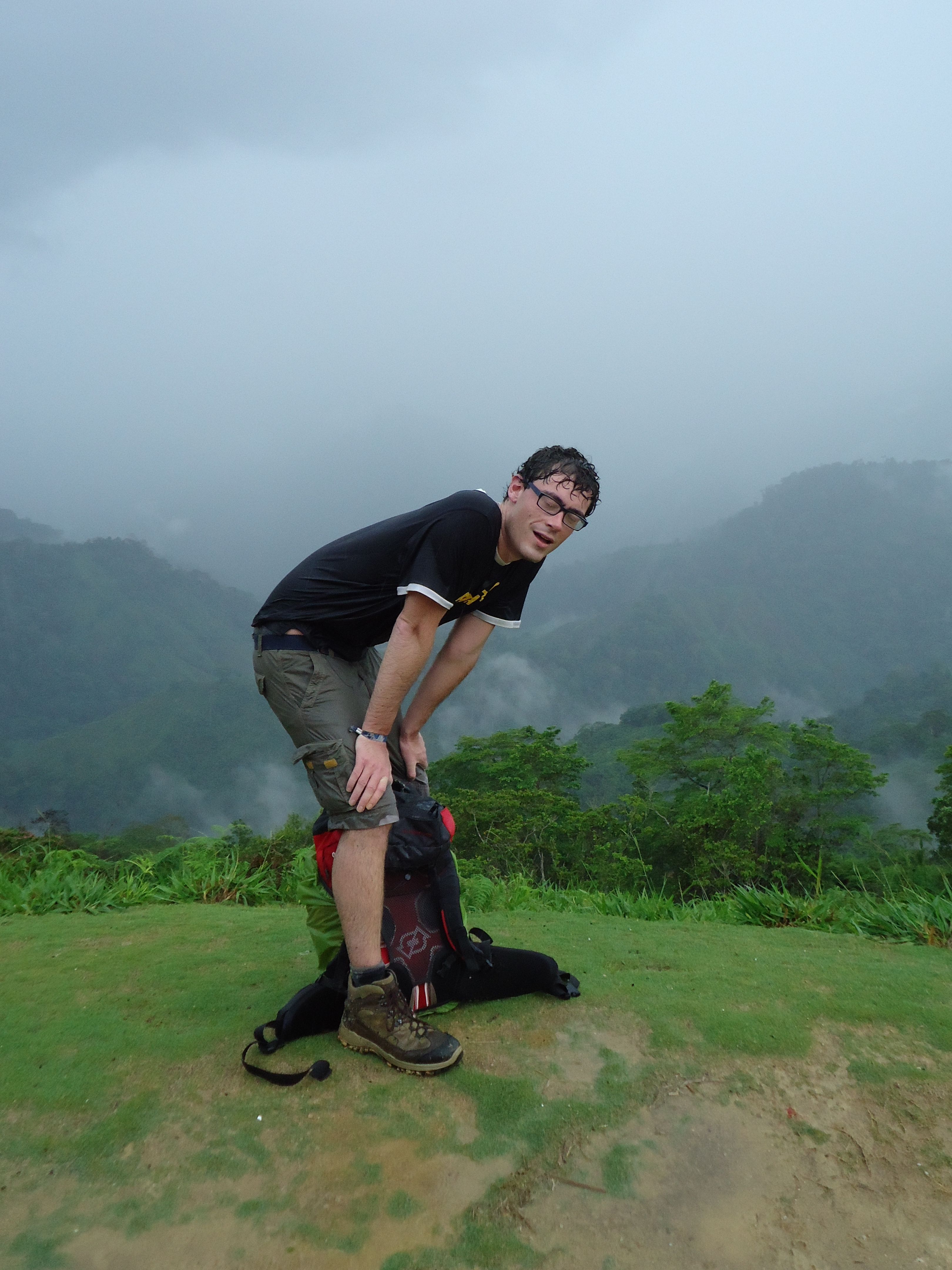 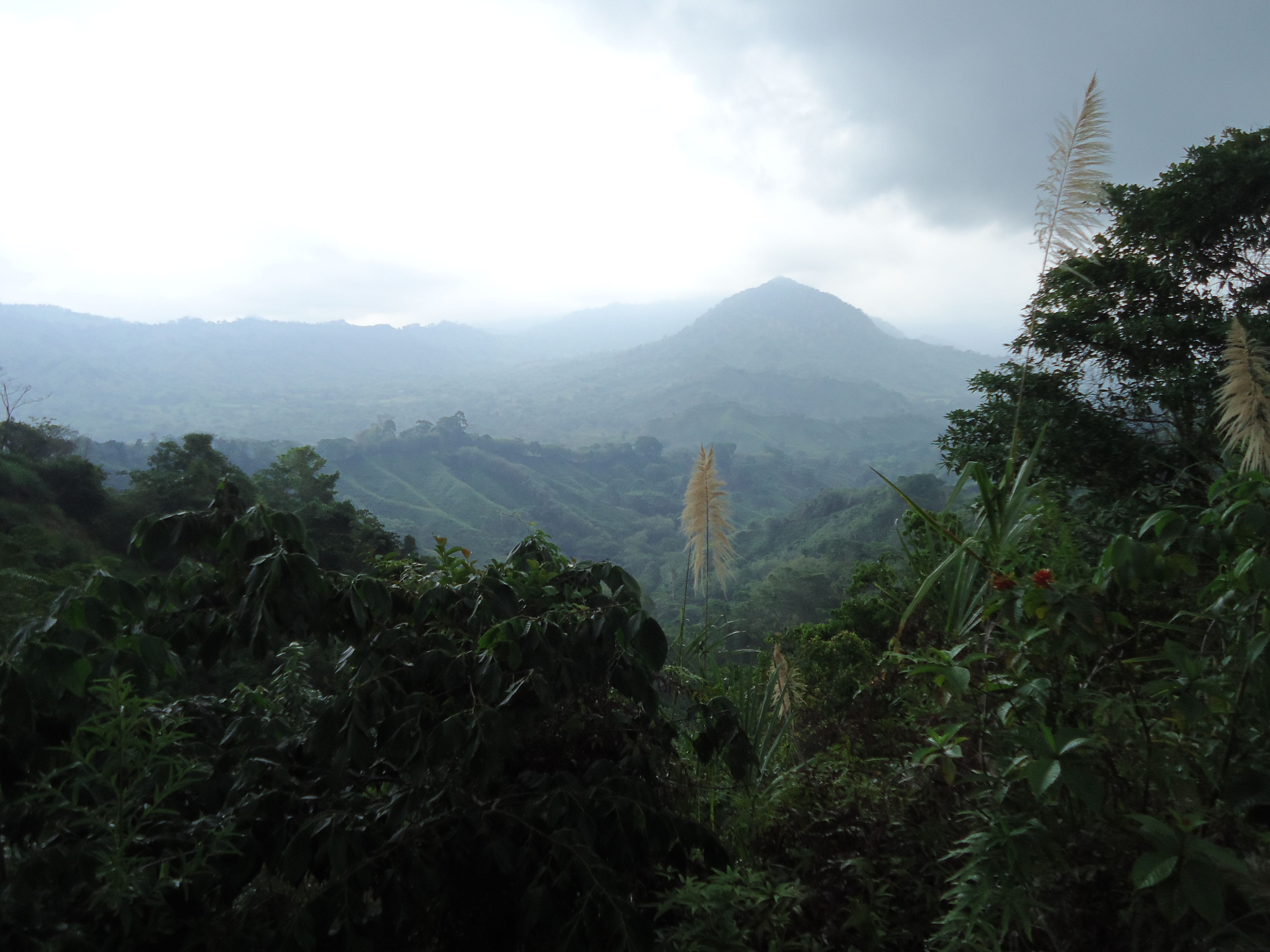 And wet again. We had to cross several rivers and steep, muddy and slippery hills. 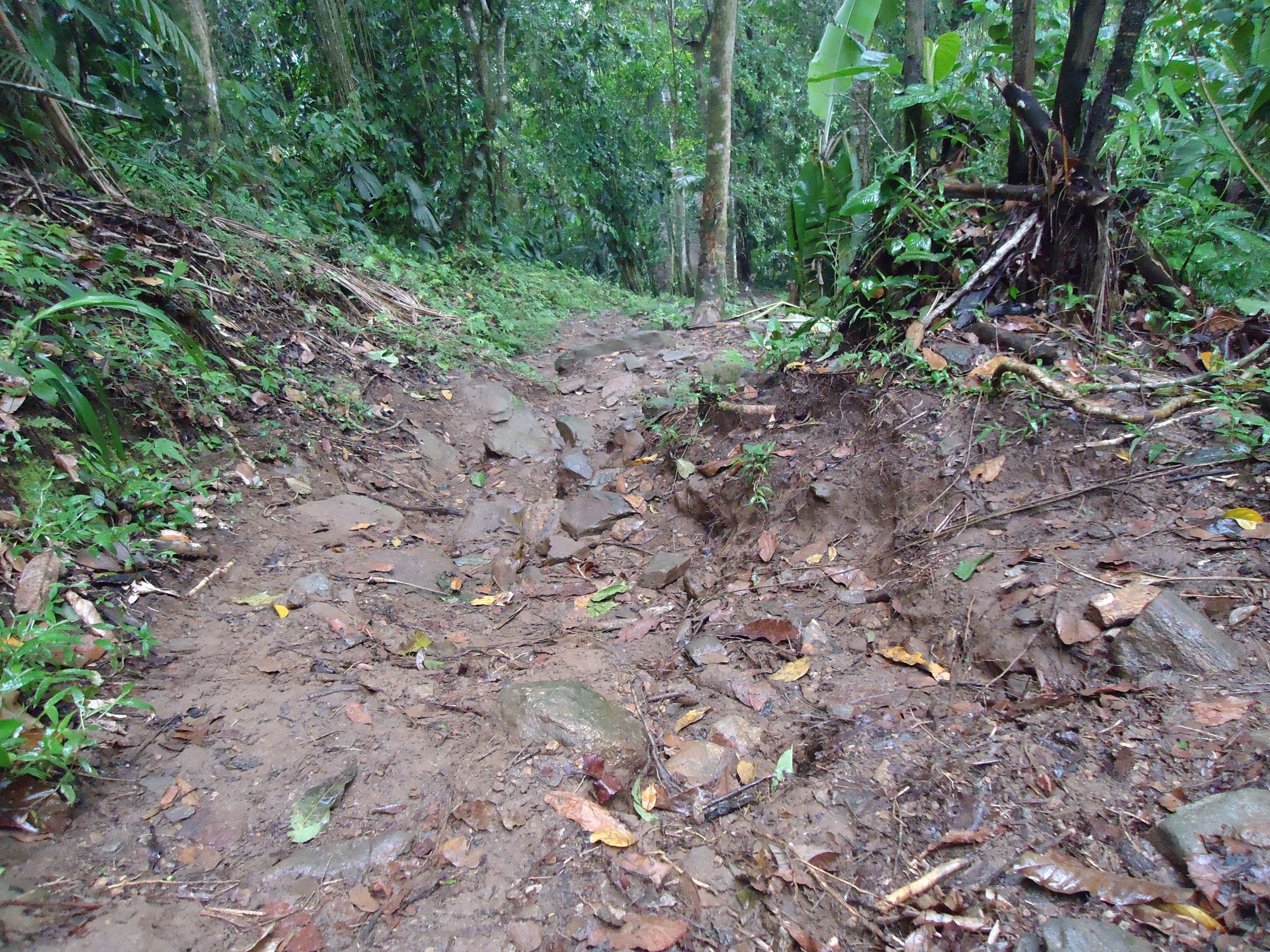 During the hike we stayed in base camps in the jungle. It were basic bunks in the open and everyone had is own mosquito net. 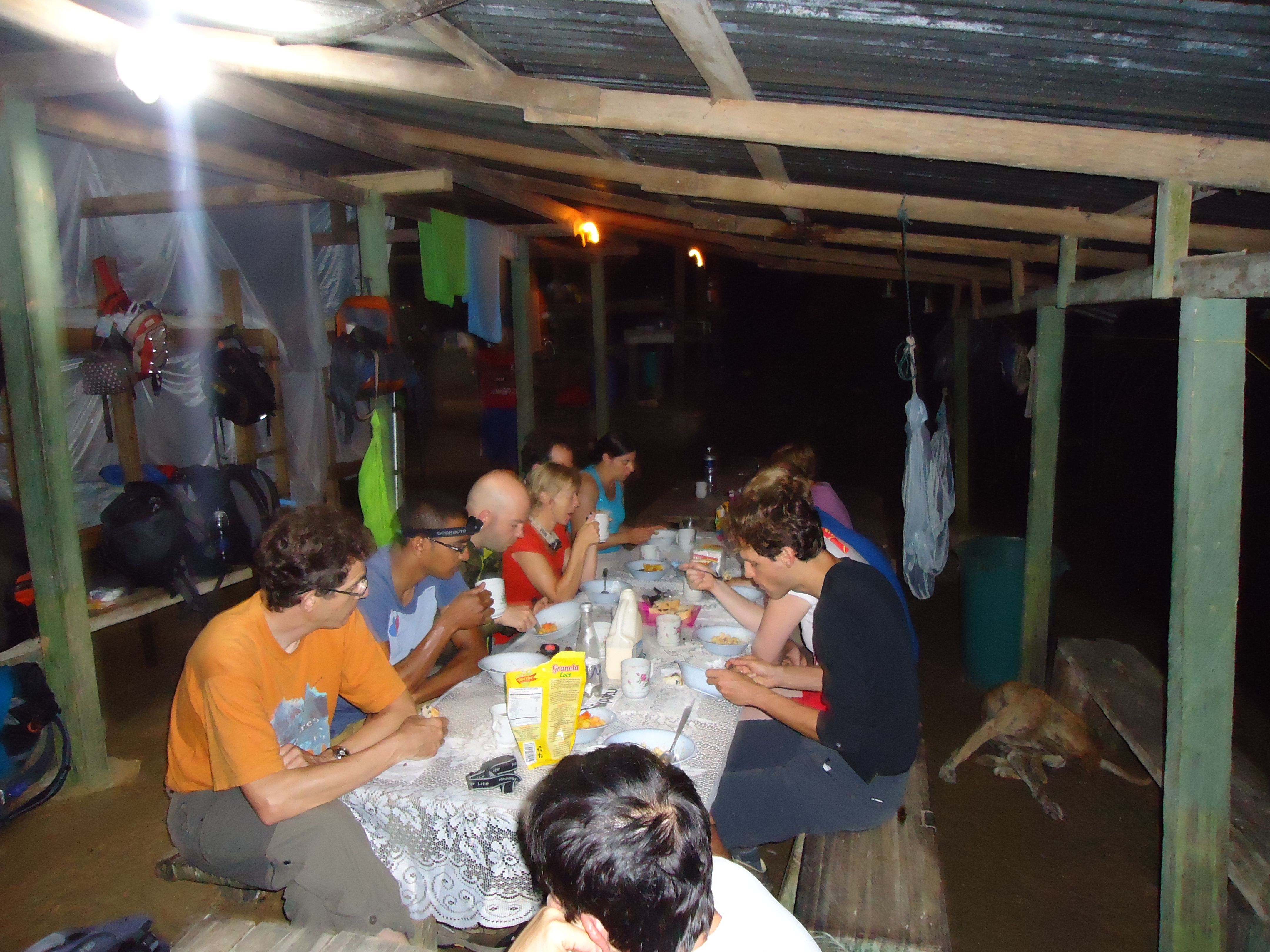 The food was basic but you can't image how good this tasted after a long day of hiking. Enjoying a swim to wash all the mud of. 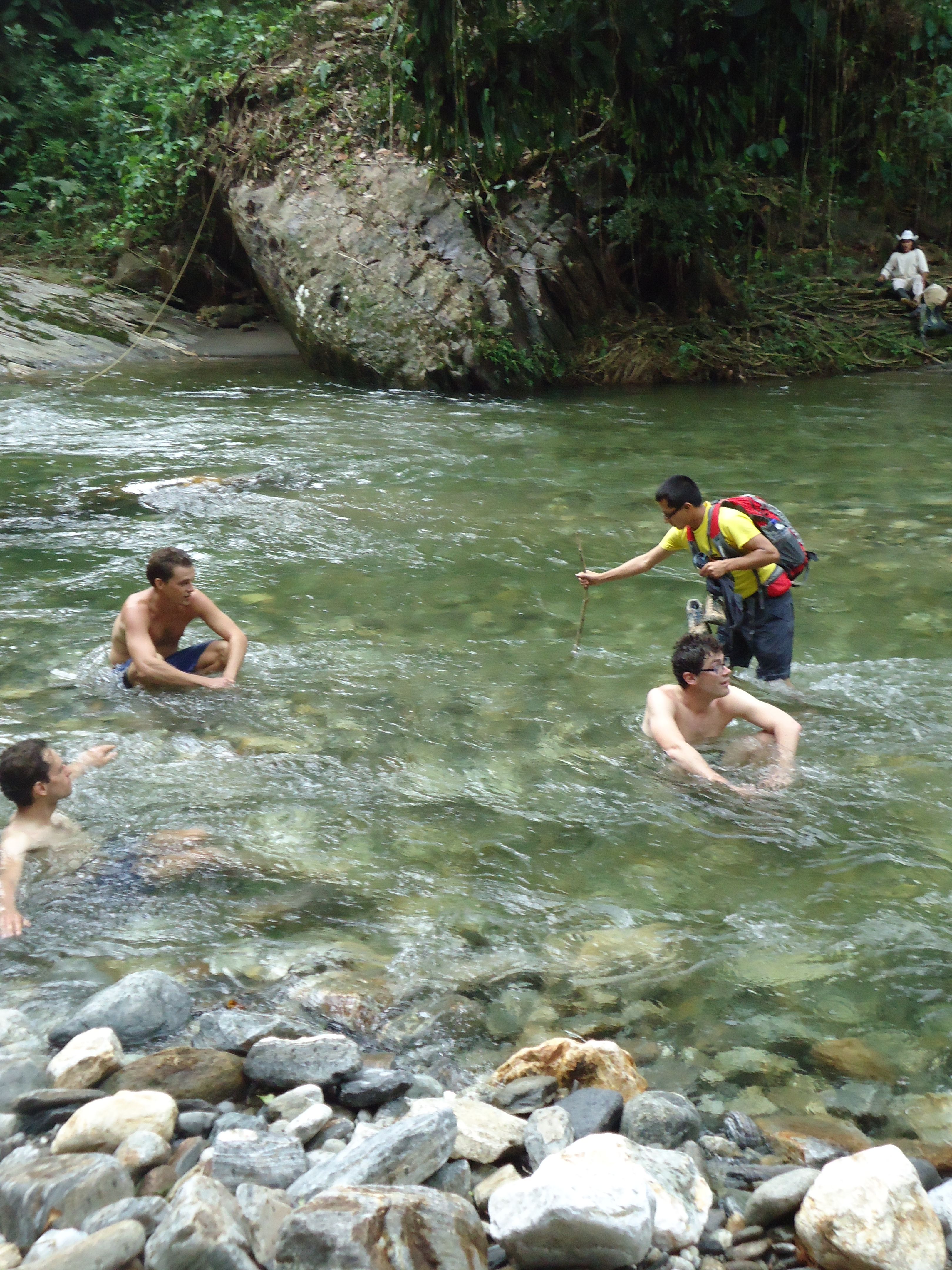 We reached the ruins on day 3 after a climb of about 1200 slippery stairs. The city consists of paths and the foundations were the buildings were located. We wandered around the ruins with our guide and the city was almost deserted. Only our group, 1 more group and some soldiers were at the site. It was a relief to walk in peace and quiet at the ruins without hordes of other tourists walking around. 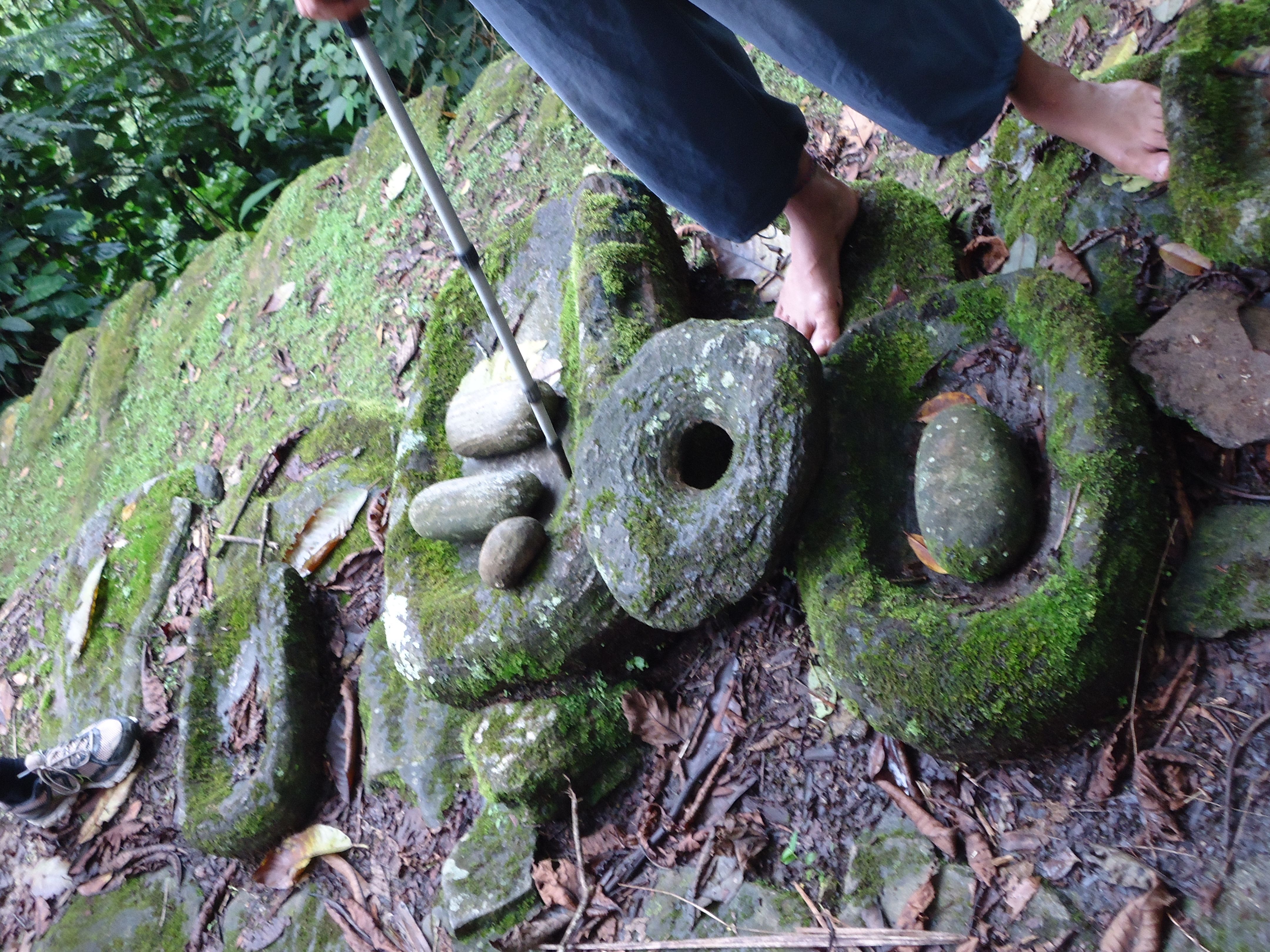 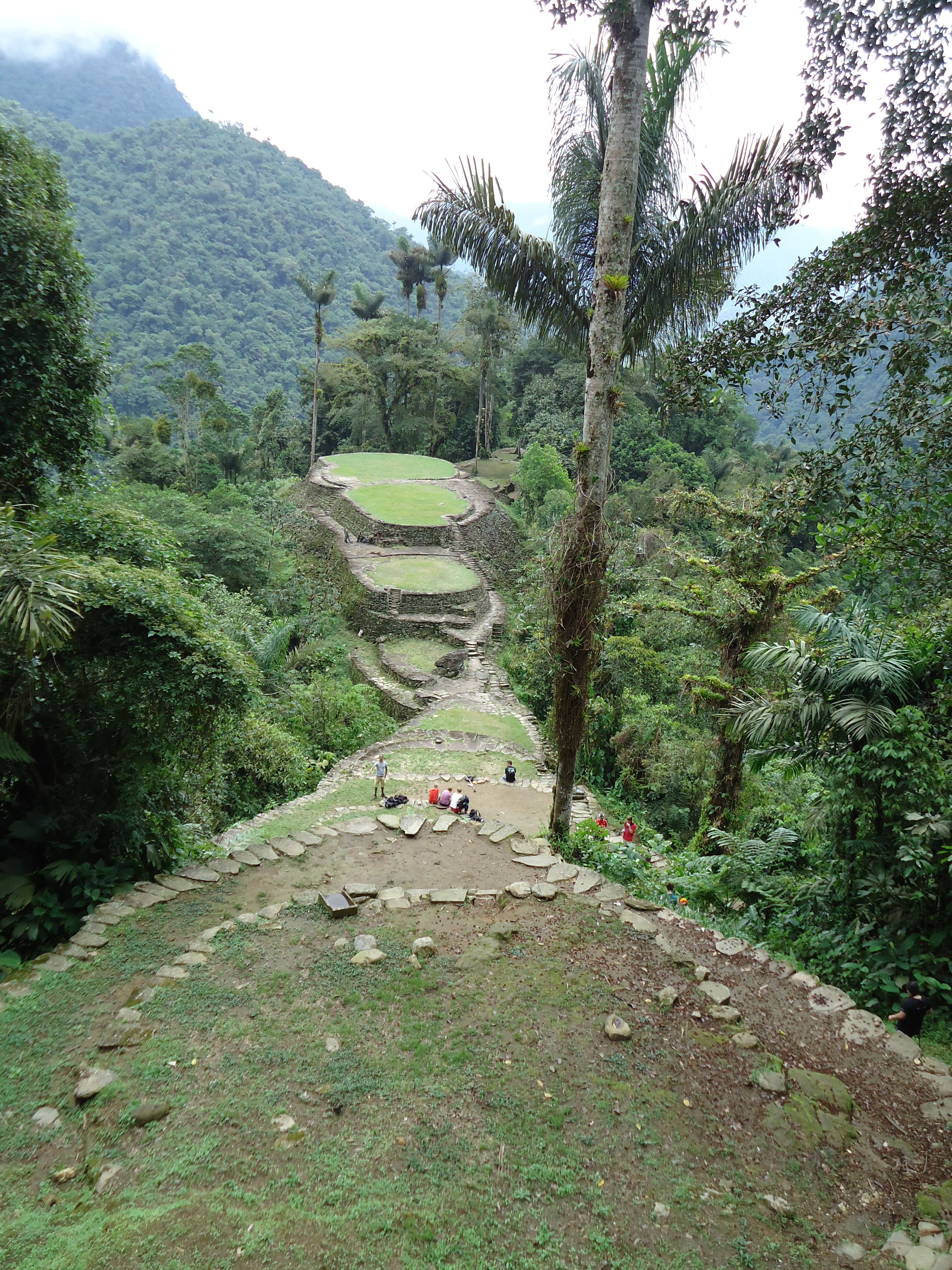 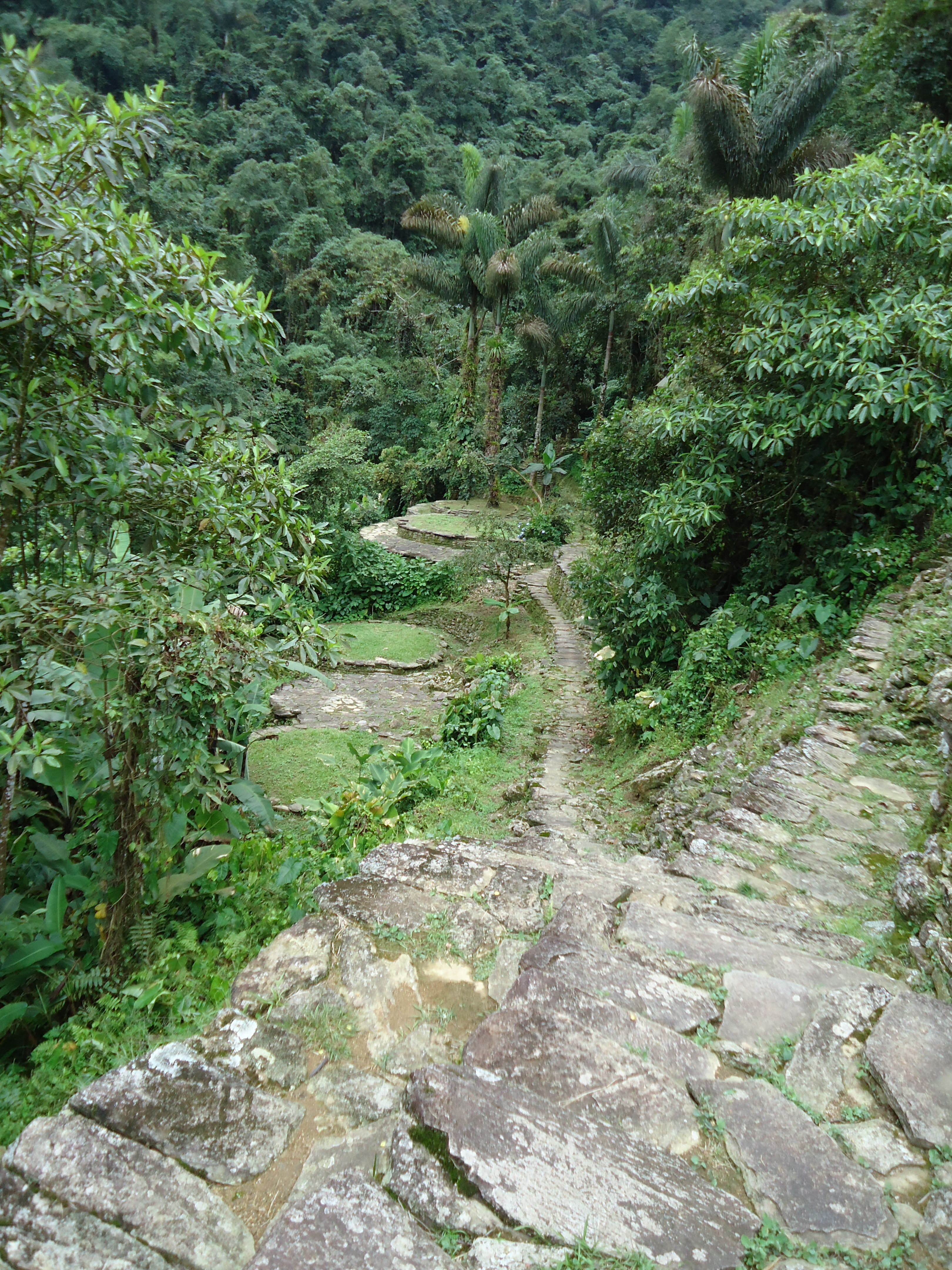 An example of how the buildings must have looked like. This rock is an old map showing the other smaller towns in the neighborhood marking the rivers and hills. 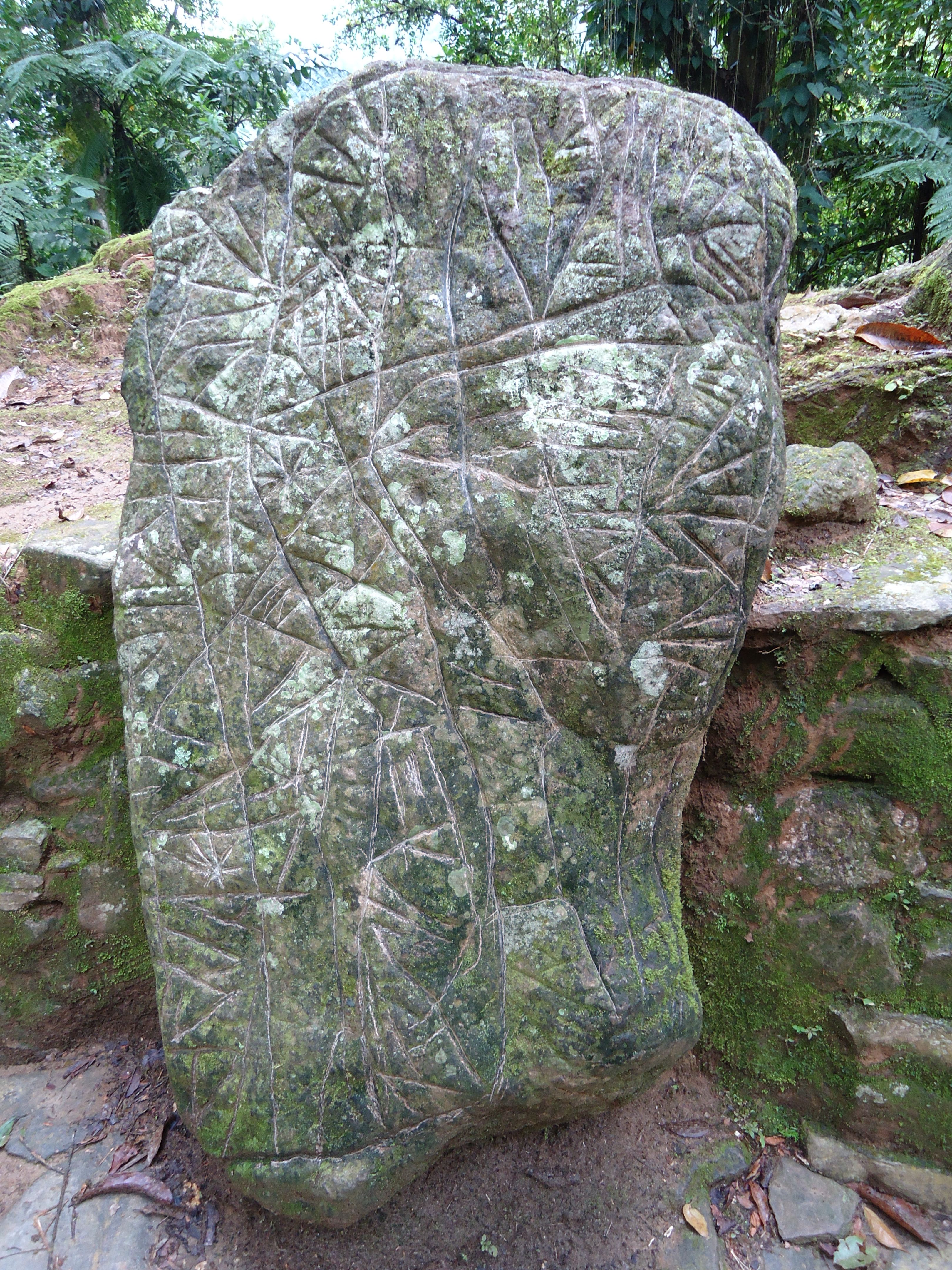 In the jungle we passed several settlements inhabited by the tayrona Indians. Tourism is an important income source for the Indians because they sell food to the base camps. Jungle are not only trees but we also saw some beautiful flowers. 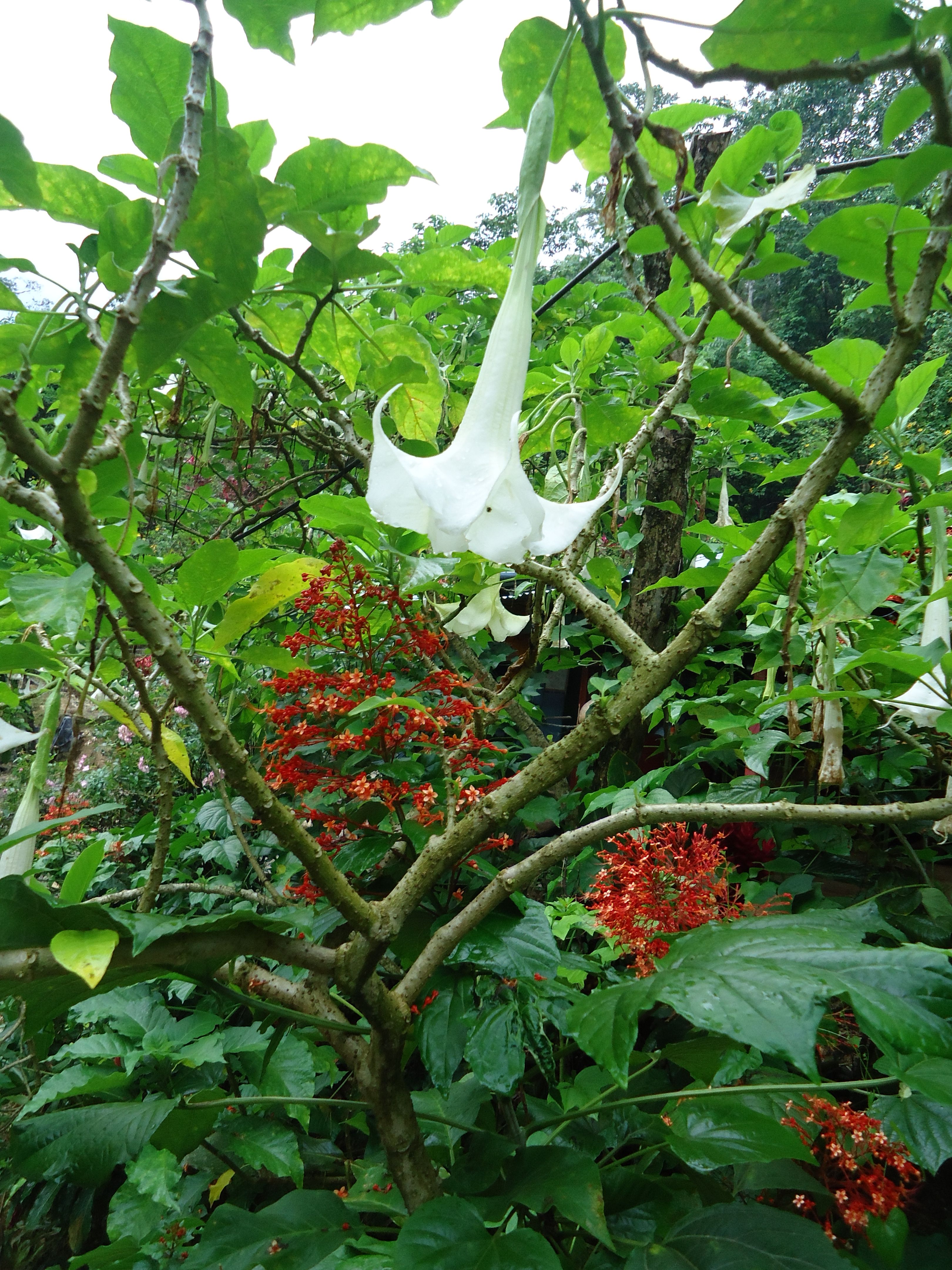 I would advice every tourist visiting Colombia with a better then average fitness to go for the challenge and visit Ciudad Perdida. It was one of the highlights of my Colombia trip

Hi @refki
This must have been a wonderful trip @pieter87
Excellent pictures and account of your journey! Where else have you traveled?

Today I am a guest curator with whaleshares. I will be sharing your post with everyone during our event tonight. I hope you can join us there on discord!
https://discord.gg/NTKXJhK

Thx a lot Akrid!!! I wasn't able to follow because of time zone differences but I scrolled back trough he curation show this morning and your mention made me smile.

I have traveled to many European countries as a child but I only started to travel internationally a couple years ago when I started working and my budget allowed it. First trip was to Singapore-Malasia-Thailand and there I got the taste for it. Been to Jordan, Colombia, Philippines, Maldives, Cuba, Egypt (3 times), Indonesia and a couple of Euro countries since that first one in 2012.

Feel free to join us any time!
If you show up Thursday or Sunday night you can present your own post!

That's an amazing travel list!
I've never been outside of the US lol Hopefully one day xD

wow, that sounds like it was a big adventure! not sure if i would be able to complete this hike sucessfully.

Like they say: no pain no gain. But if you don't sport weekly a bit of preperation isn't a bad idea

That looks like an amazing trip @pieter87. I would love to do something like that some time soon. I have done some jungle trekking but never visited isolated ruins like that. Nice pic's man!

Thx Raj. Keep on steeming and buy yourself a plane ticket with the profits. I read a lot lately about Guatemala. They found a lot of ruins with a laser scanner on a plane. Read a steem blog about a girl there who did a couple of these ruins unguided.

Beautiful done, awesome pictures, and normally I don't like hiking but this looks like so much fun!

thx. It was fun in a way that it gave a great satisfaction when reaching the lost city and being able to just wander around.

I saw your post during the Whaleshares Curaration Show. What an adventure!

Thx! Just scrolled back trough the curation show and it's a nice start of the day to see my post pass.
And indeed, it was tough from time to time but when looking back to it, these 5 days were a highlight of my holiday to Colombia.

Trips like that certainly get woven into who we are, don't they? Glad you got to have that experience.

This trip look like so much fun! Made me wish I was there! Upvoted :)

That looks awesome. I am supposed to go to Colombia this spring for a shipwreck survey and I can't wait. Thanks for getting me really excited about the trip.

If you stay near the coast then Cartagena is worth a visit too. It's getting touristy and a lot of cruiseships dock there but it's still a nice historic city. It reminds me a lot of Havana.

Your wonderful post was featured in DAILY DIGEST - Featured Quality Posts - March 8 2018 with a complimentary upvote from our team and members. Keep providing valuable and original submissions in #steemrepair and interesting content to Steemit community. Discord Server Invite

Congratulations! This post has been upvoted from the communal account, @minnowsupport, by pieter87 from the Minnow Support Project. It's a witness project run by aggroed, ausbitbank, teamsteem, theprophet0, someguy123, neoxian, followbtcnews, and netuoso. The goal is to help Steemit grow by supporting Minnows. Please find us at the Peace, Abundance, and Liberty Network (PALnet) Discord Channel. It's a completely public and open space to all members of the Steemit community who voluntarily choose to be there.

hey @pieter87 I found out about this post during the Curation Lounge show last night on Whaleshares Discord Server.
I enjoyed your post, I bet it was a life experience adventure. It looks amazing!
Keep documenting this adventures, cheers!

Thx. It was indeed something you don't forget easily.

Got many more of these stories but it don't want to post them just to post something. This was a nice one because it got triggered after a message of that friend who goes to Colombia too and took me back in time.