Our First Day in Puerto Rico!

I just put together a quick video showing the crowd at CryptoMixerPR organized by @virtualgrowth and @cybercodetwins. Our fellow Steemian @quinneaker was there as well and spoke on building sustainable communities. He and I had some great conversations. CryptoMixerPR was an amazing event and reality-defying considering the whole thing was planned in a matter of days (!!!!). Hundreds of people showed up! I was asked the day before to be on a panel discussion and then later got slotted for a Blockchain 101 talk (which was hard to give in that environment), then told my talk wouldn't be needed, and then told again (minutes before taking the stage) that I was needed as the next speaker was still in route. It was a little confusing, but I tried to make the most of it and hopefully delivered some value.

I've already met some really cool people and had some great conversations and it's only day 1! The conference hasn't even started yet. :) I've also had a blast hanging out with @sean-king and look forward to doing that more tonight as his daughter will be watching our kids and giving @corinnestokes and I a chance for some adult time at the Blockchain Unbound welcome party.

Oh, I also have to mention, I ran into @mranderson in the airport yesterday who recognized my Steemit shirt! When I introduced myself, he knew who I was as we've interacted before on the blockchain. My son Devon later tried to convince me I'm a celebrity because someone in the airport knew who I was. That turned into a fun conversation with my son, explaining that's not really what celebrity means (nor is that something to strive for). :)

I hope you're having a great day. I wanted to say thank you for all the support on my recent post about selling my business. I also just noticed I'm up over 10,000 followers now. Wow! Thank you again.

Luke Stokes is a father, husband, programmer, STEEM witness, and voluntaryist who wants to help create a world we all want to live in. Visit UnderstandingBlockchainFreedom.com

Great post, I love PR. Say hi to @virtualgrowth, this guy's on the road constantly!

If you know anyone who wants to help me and the Veniceball crew redo some courts in PR, please let me know. I posted about that a couple of months ago. We all have to play a small part!

p.s. self upvoted to move up.

Yes to helping to redo some courts in Puerto Rico! Love to talk more about this sometime and coordinate something. Maybe during May 6th to the 10th along with other stuff as more volunteers will be around.

@liotap. that would be a great addition to VBL's efforts!

seems to me that we can all benefit from what others are doing. i see synergies here.

Keep us posted, Luke, I'm stoked to find out what the SOL project is all about over there! 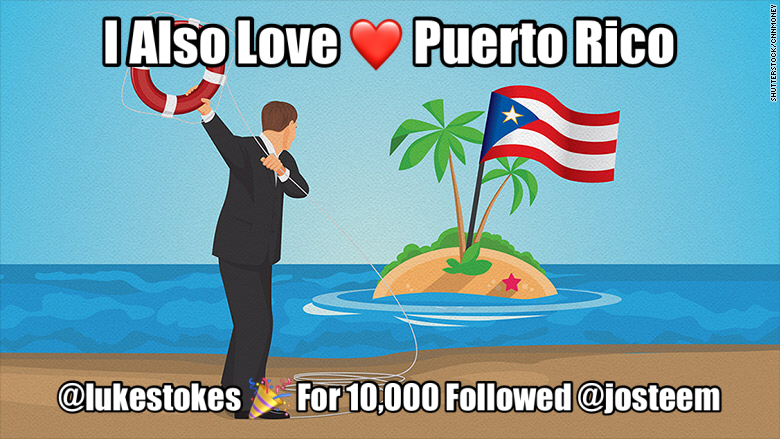 Devon is right. You are a celebrity now. The celebrity on the steemit. Enjoy the party conferences and discussions.

You sure know a lot of people from steemit. Must be good when you actually meet the people behind these profiles

Such type of trips and meeting such people is really an honour, hope you enjoyed the discussion as well as the trip.

That's funny I was just looking at Puerto Rico this morning where they are saying is about to become a CryptoParadise, but great to see u made it there! 🌴🌞 @lukestokes, what a beautiful family! I'm sorry we didn't get to meet at Anarchapulco. Wanted you to know that I've also 'lost eternity' (former hospice chaplain)...

...and have fully gained Right Now.

Love your videos and work man, please check out my video on the Subcommittee Hearing today in Washington if you get a chance, enjoy the beauty of Puerto Rico!


You have received up-vote from @steempeninsula account courtesy of @bob-elr and team.
Keep doing great job for the community.
For enquiry, connect to us via Discord
$0.00
Reply
[-]
chorock (73) 5 years ago

Most of Whales of Steemit are in Puerto Rico. I hope Some Whales visit Turkey. Maybe we will have a change to meet...

Really wish I could be part of a meet-up such as this @lukestokes . From the video, I guess it was a total success. Keep making us proud and voluntarily or not you'd become a major celebrity. Your son's right you know☺

I couldn't watch your video because my internet isn't fast enough here, but I hope you're enjoying Puerto Rico! We left Puerto Vallarta and are in San Blas, Nayarit, MX. Our first impressions of this place couldn't be better.

That's pretty cool that someone recognized your Steemit shirt! We've been wearing ours all over Mexico and have yet to be recognized :/ It's also possible that the Steemit shirts have been recognized, but they didn't speak English well and assumed we don't speak Spanish.

Anyway, hope you have a good time in PR!

Congratulations sir... Now you have 10000+ followers... I'm lucky to be one of them... And Puerto Rico seems very awesome trip... I'm unable to post here from last few days... Probably I will do it soon..

Hundreds of people present at the conference seemed enthusiastic to listen to the speakers' explanations. holidays are always fun when with family, all places not just puerto rico which is like heaven if on vacation with family.

So jealous :) Enjoy bro, hope you can move permanently!

Great to see you @lukestokes! Thank you for the mention as well! Look forward to next time!

I'm glad we got a chance to hang out a bit.

Thanx a ton! You'd made people more curious about Puerto Rico and Steem ;)

I hope so! Thanks for the opportunity.