After the long exhausting day in the extreme cold we had yesterday, we slept like a couple of logs way passed sunrise. We forfeited a few daylight hours but on the agenda today was the train ride to Dunster via Mount Robson, there was no rush since the train didn't leave until noon-ish... So we thought...Around 10 am, The phone rings, Sundog tours cancelling our train ride because of mechanical issues. WHAT ?!? I suppose it's not a shock, it was still -40 with the windchill. From working in industrial construction, we both know not much works properly at these frigid temperatures. I was still in awe that my camera actually worked all day yesterday, even tho it ran like January's molasses it still didn't shut down like @silvergingerman's iphone. Still , it was the second time this weekend Sundog tours let us down, initially sending us to the wrong location for last nights planetarium adventure... I'm not sure about these guys!! We probably wont be booking much with them in the future and take care of our own tourist activity bookings. 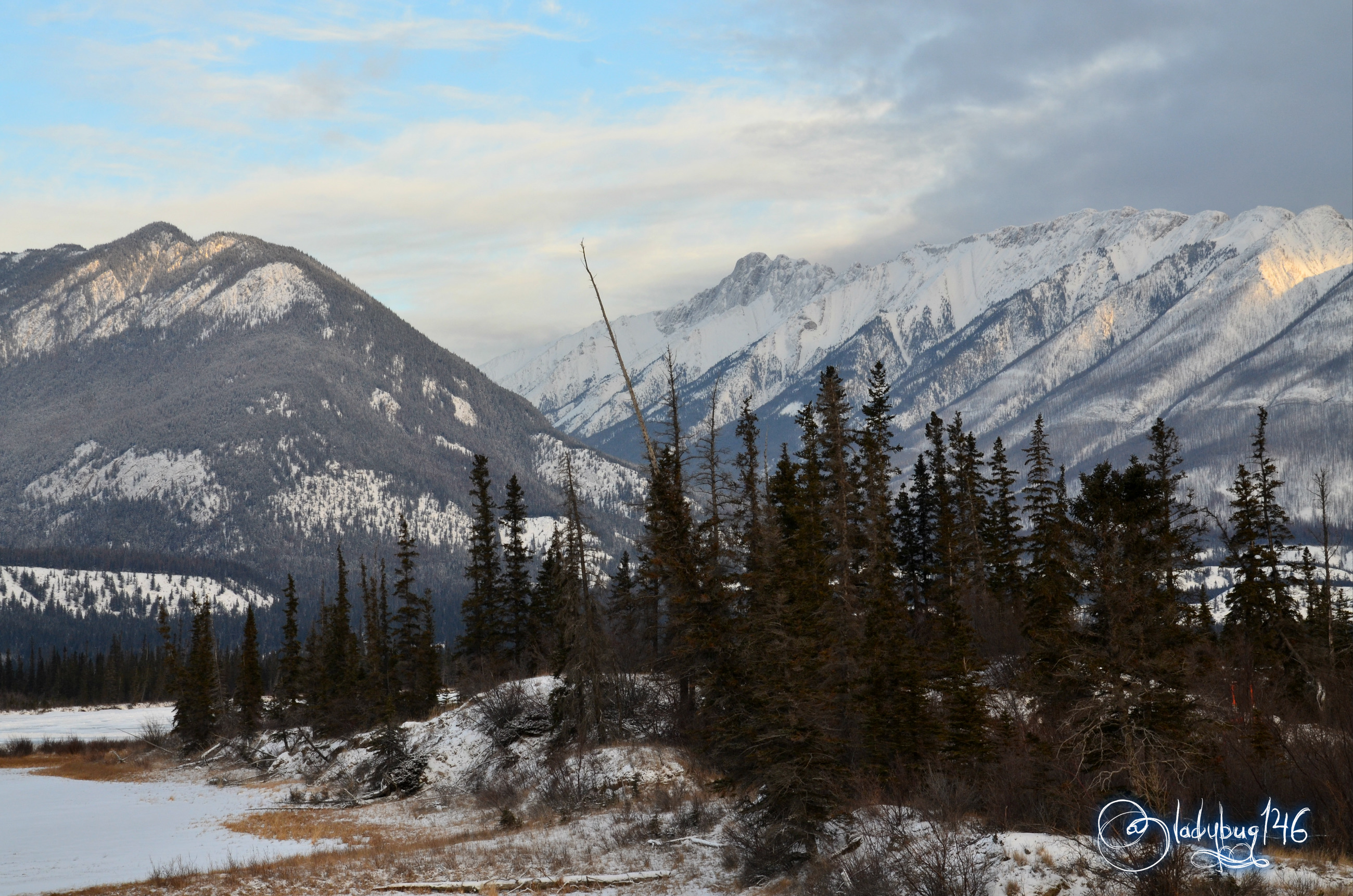 All wasn't loss, the day goes on. After a few minutes of reflection, we decided we would just take ourselves there. We really wanted to go this summer but couldn't because of wildfire related road closures, there is no way we were going to get our plans foiled for a second time this year. We went down for breakfast before leaving, not much of surprise, they had nothing safe for me to eat due to my severe food allergies and BCM Inn would not accommodate me with a plate of pan fries they had the day before... a very simple request I thought (they had them,the staff just didn't want to cook them)...way to accommodate your guest's needs!!! While I watched @silvergingermans eat breakfast, I thought to myself, two fails and we didn't make it out the door yet! I hope it's not a preview of what today is going to be like !! 😟 😣 It didn't take long for the landscape to take my disappointment away, It was still cold but it looked like the haze we were in yesterday was starting to clear up offering better lighting for my pictures and revealing the usual rich blue sky Alberta is known for, maybe today could warm up to an almost bearable temperature. On our way, we crossed what is most likely the same herd of Rams we saw climbing the mountain yesterday now licking the salt left behind by the river that flows all summer from glacial melts and dry up for winter when the glaciers freeze up for the season. 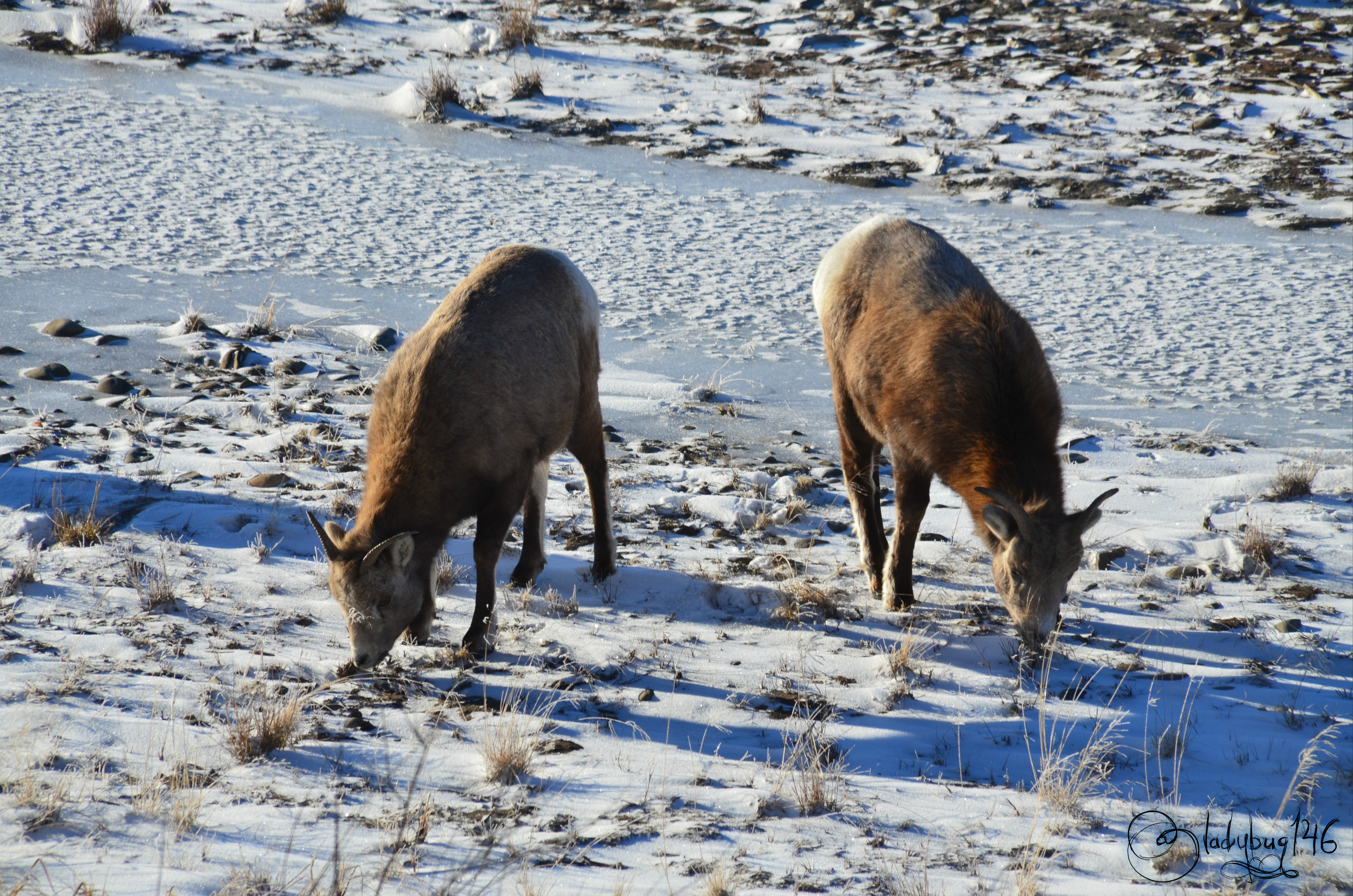 We wanted to stay a bit longer to take better pictures but it didn't take long for tourists with no regards for safety or traffic started to park in an unsafe manner and clogging up the road nearly causing an accident with a semi, so we got out of there and continued towards our destination. After an hour and a half of driving and admiring the magnificence of the mountains, we finally reached Mount Robson Provincial Park! At last! The temperature had finally warmed up to a whopping -25, with no wind it actually wasn't half bad! We had the place to ourselves, Of course we had to take a few pictures and stretch our legs a little since we were not quite at our desired destination yet. The purpose of the visit was to scope out the surroundings and what infrastructure available for a future camping trip and maybe evaluate the trail to see if climbing to the highest point in Canada was a task we can undertake in a few years after some planning and a bit of endurance training. 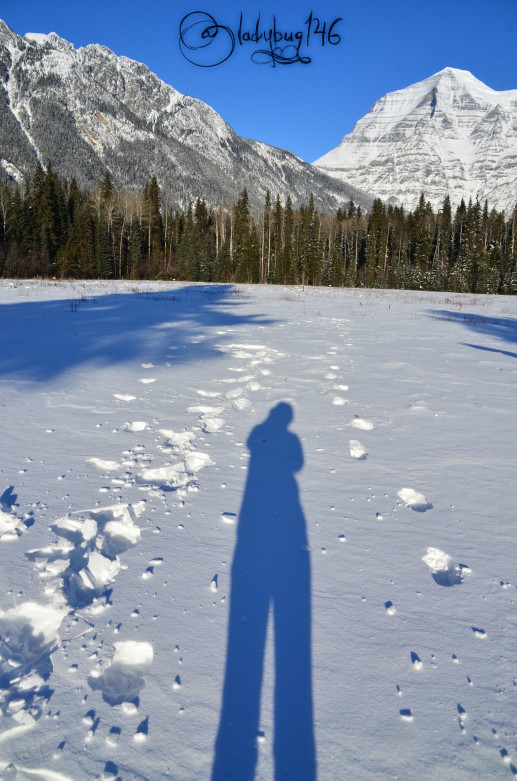 The sun was shinning really bright, luckily, it was on the opposite side of the mountain, therefore not interfering with photography, in fact made it perfect lighting for my camera. The sun was in such a perfect position, being the nerd that I am, I noticed it was casting my shadow perfectly between the footprints, I had to take a picture of myself taking a picture just because I can!! ( Don't judge!!) Alright, alright, enough goofing off and time for the real pictures I came here for!! As mentioned earlier, Mount Robson's peak is the highest point in Canada but not the tallest mountain. This is because of what elevation it sits, above sea level. The tallest mountain is actually Mount Logan, located in the Yukon. Still standing at 3,954 m or 12,972 ft, falling short of 1.5 kilometers in height compared to Mount Logan, is still impressive nonetheless and the second tallest mountain in the British-Columbia Rockies. Since I'm crazy enough to venture outside in the polar vortex, I'm crazy enough to find myself atop Mount Robson someday soon...Yes I want to climb that thing. It takes a few days tho, it wont be today. We certainly need to get fit first, we climb 200+ feet towers 10 hrs a day at work, stairs, ladders and walls (like a mountain sheep or spider hehe!) and already have a high endurance for physical activity for long periods of time so it shouldn't be too much of a stretch. Mark my words, I will make it to the top of Canada before I die!! I love the vantage point, the challenges and the sense of accomplishment that brings such a task. Although doing such a high climb of the complete mountain would be a first for me since I've only done day climbs thus far. 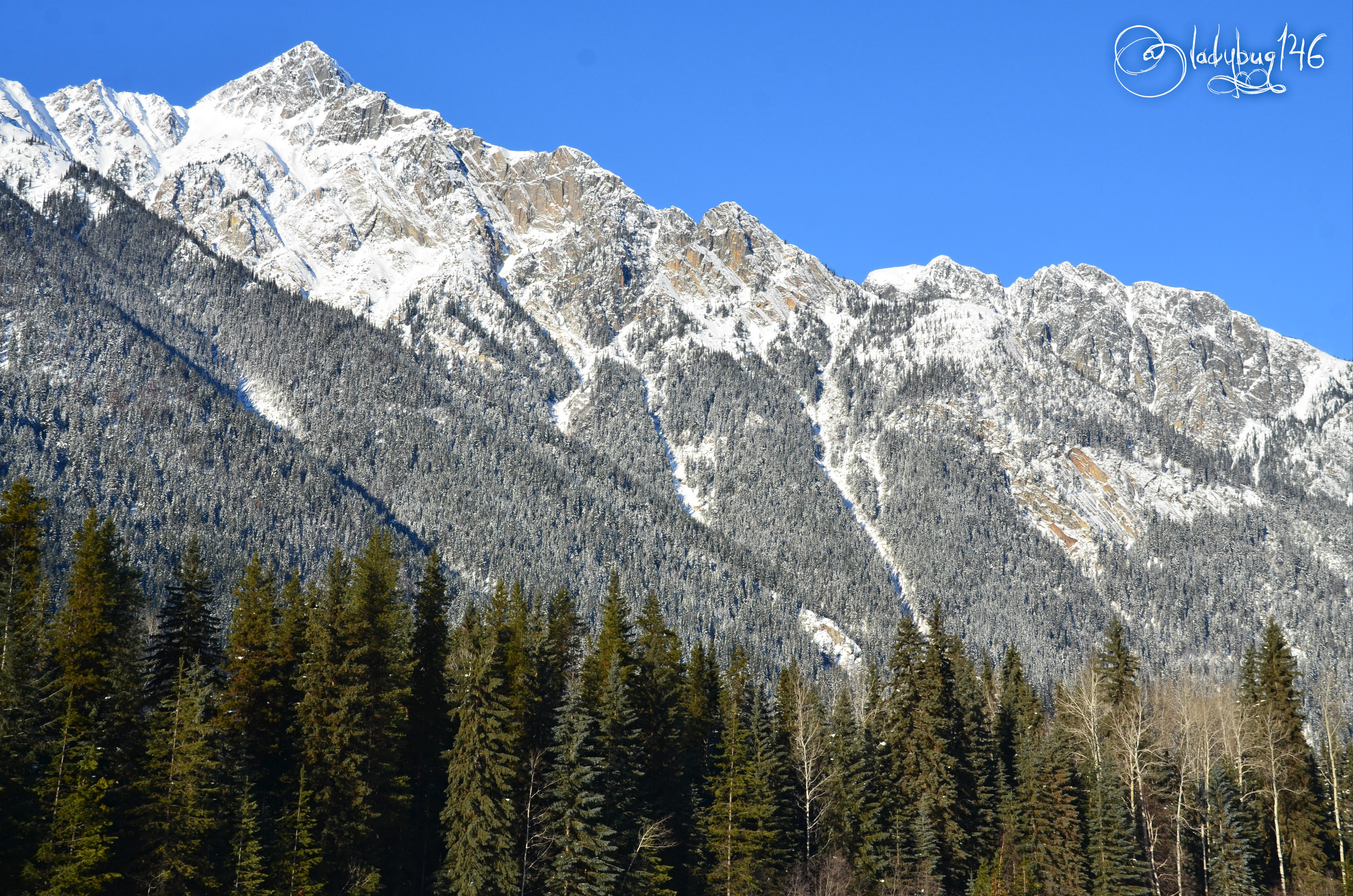 Next to Mount Robson, sits Cinnamon Peak, which was our next destination for the day. We continued on our mission, once to the trail area, to our surprise, we weren't the only ones here enjoying the mild -25 afternoon! We ran into a family of cross-country skiers also hitting up Berg Lake Trail. I suppose I was a little jealous, growing up in the Appalachian Range across the country, I spent all of my winter days cross-country skiing in the mountains as a teen. Seeing them definitely made me miss it, perhaps I should get back into it, great workout!! I had new hiking boots to break in, it was time to hit the trail and start our ascent towards Kinney Lake even tho we knew we wouldn't get there because it's still a few hours of hiking and with limited daylight, we had to allow ourselves enough time to come back down. The Berg Lake trail snakes along the Robson River, where it's water supply comes from multiple glaciers running down from the mountain, even this time of year, it was amazingly still flowing. Overall it was a pretty manageable trail, the cross county skiers carved a trail in the fresh snow, made it easier for our climb. Nestled between the trees, we were sheltered from wind and of course living in such a cold northern landscape, we were dressed for the back-country so the cold wasn't much of an issue, we were pretty comfortable once we got moving. Once again, @silvergingerman's iphone didn't make it ...lol...( Nikon 2 - iphone 0) it was now up to me to capture the memories for both of us. 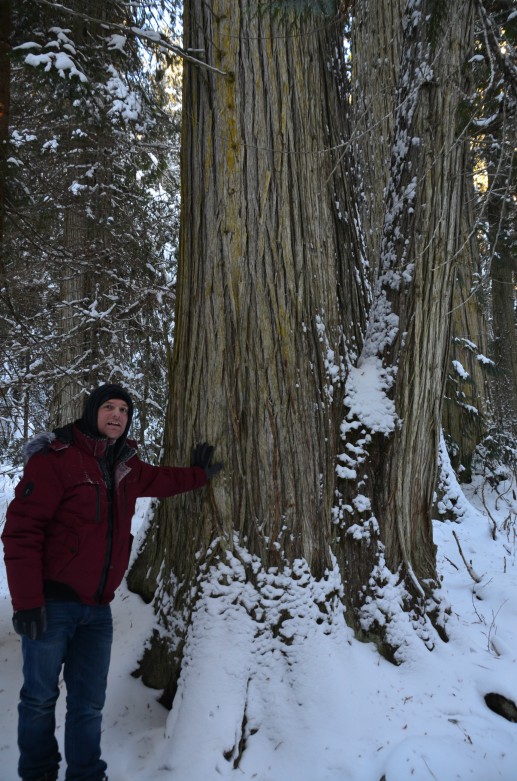 As a child, I learned about BC's giant trees but somehow I forgot about them until today, @silvergingerman is over 6 feet tall, he's a fairly tall guy with long arms, I don't think even he could have wrapped his arms around these trees! Due to it's altitude, plenty of sunshine and more rain than most other Canadian landscape, it allows for trees to grow to the large size you see above. Wow!! I can't begin to describe how giant they were, it's an amazing sight, these unusually large trees can be found all along the trail. We hiked for over an hour and a half, my new boots were starting to get uncomfortable and hurting my ankles and we were starting to get cold as the sun wasn't as strong anymore...It was now time to turn around so we could come down from the mountain and out of the trail before sundown. I'm kinda happy the train ride activity fell apart, we wouldn't of been able to do this hike and explore the area like we did from the train, I suppose we can call this one a blessing in disguise!! part of me is still slightly disappointed tho, we will have to try again someday. 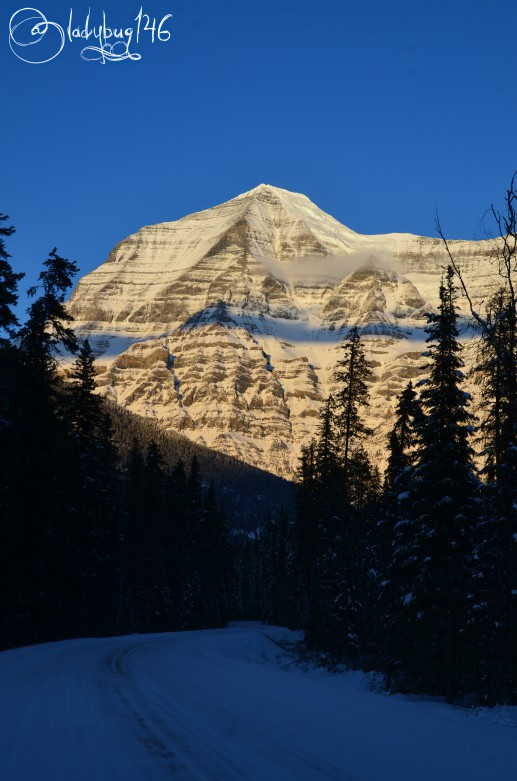 This concludes our second day, like boring people, we were lights out by 10 pm on this fine new years eve while the rest of you was most likely up drinking and celebrating. I don't drink ,this was my celebration, we had another fun filled day ahead of us anyway, we wanted to be well rested for the last day of our New Year getaway. Stay tuned for the last day of our trip coming soon.

It was an excellent day hiking on the mountain for sure! And the picture of the tree really does no justice to exactly how huge it really is! I felt like I was in a forest of monster trees!
I can only imagine how much water has to be melting from the glaciers for that river to still be flowing the way it was in the cold that we were having! That river is going to look like a monster in the spring/summer for sure!
The ravens, well they were the first to greet us to the park and were actually very large as well! It seemed as though everything there was larger than life! I actually found it amazing how they crouched into little balls on the ground (waiting for some sort of handout for sure!)
I'm so glad you were able to get the pictures that you did though, especially with mr. iPhone fail over here capturing only the entrance to the park and the ravens as we left lol!

the trees really surprised me, I can't wait to see what that area looks like in the summer. I am glad we decided to take ourselves there and spent the afternoon. The birds had pretty cute behavior indeed, like you said probably looking for food, they looked well fed anyway.

canada has a beautiful landscape. thanks for sharing, must be great to be in the mountains there!

Yes it's an amazing landscape here in Canada !! it was worth the cold !! Thank you for viewing!

Thanks for sharing! I know I would rather have been here on New Years Eve ;) ...or somewhere warmer :D

We all have our preferences! I'm not to bothered by the cold, It's not optimal but better than crazy heat. Thanks for stopping by!

It's such a beautiful part of the world!! I loved it around Mount Robson. Here's my vlog: