THE YOUNGEST LANGUAGE IN THE WORLD? DIE ANTWOORD IS AFRIKAANS! 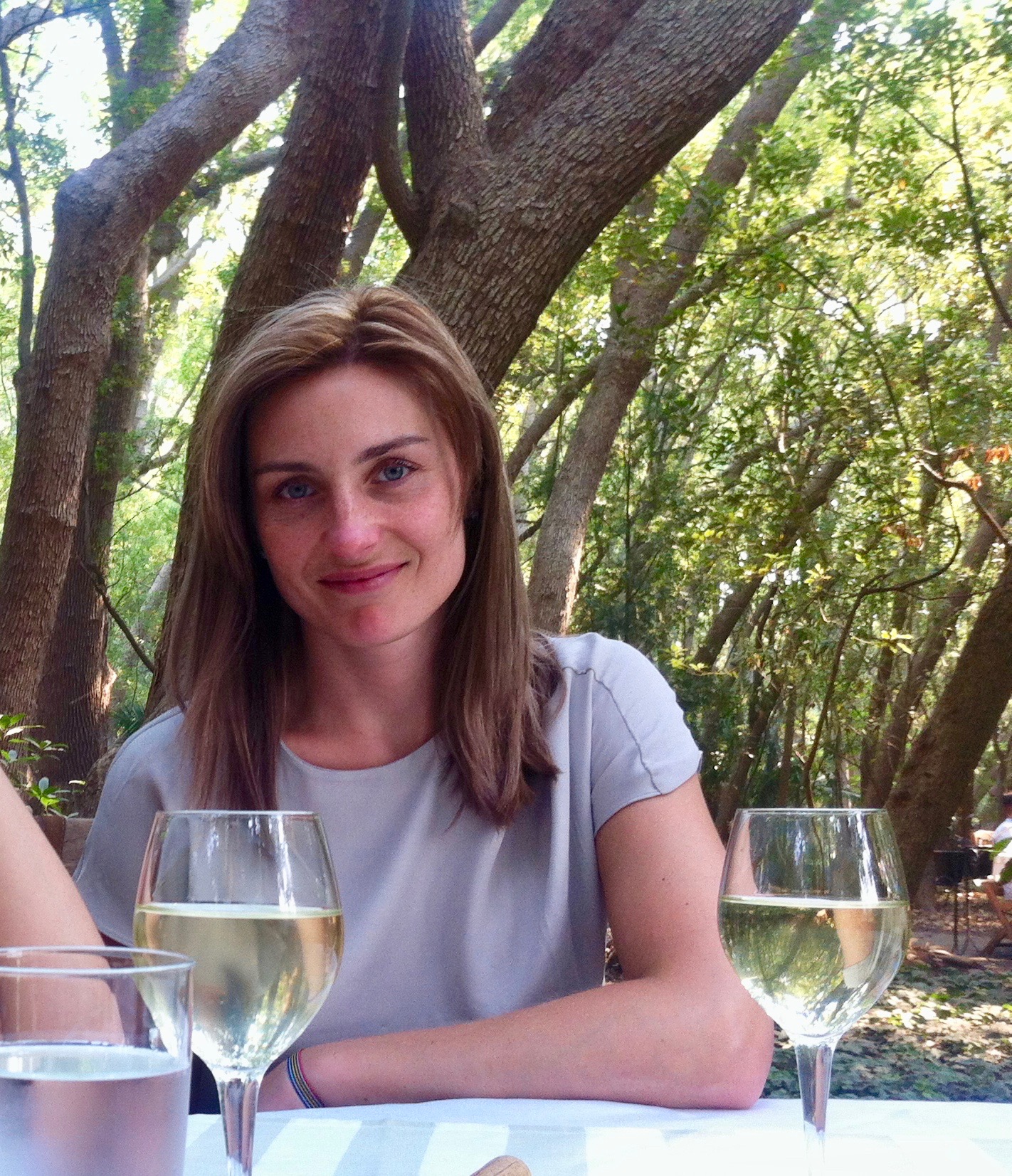 South Africa has eleven official languages: English, Afrikaans, Zulu, Xhosa, Tswana, Swazi Ndebele, Sotho, Northern, Sotho, Tsonga, Venda Spreading it’s roots in Africa, Asia and Europe, and being spoken by approximately 60% of South Africa’s Whites and over 80% of the Coloured population. Afrikaans is one of the youngest languages in the world.
The Cape Colony in the Table Bay was a refreshment post for the Dutch East India Company on a sea route to the East. The earliest ancestors of the Afrikaner nation were the officials, mostly of Dutch and German citizenship, as well as the group of French Protestants fleeing from France in 1688. The officials, after finishing their contracts in 1657 retired in the Cape and became free citizens, Identifying itself with African soil, this unique cultural group developed their own language, national identity, religion and history. The dialect known today as Afrikaans originated from the 17th century Dutch language and is a result of a mix between two main languages Dutch and German, further developed by Huguenot settlers who altered the sounds and added certain words. It is of course also an accumulation of many other influences both foreign and indigenous. Afrikaans started evolving also thanks to the newcomers, such as the sailors who had been shipwrecked off the Cape coast. At this stage it was referred to as Kitchen Dutch or Cape Dutch, and used only as a spoken language with Dutch used as the written and formal language. With the arrival of slaves, it took on a different flavour, depending on their origins, from other parts of Africa and Asian languages. The Indian and Indonesian influences were brought by indentured labourers from the East Indies and India. Along with Khoikhoi dialects, all these languages phrases and accents influenced the way people communicated. 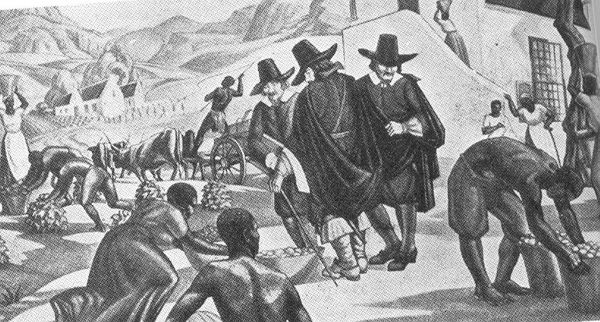 The Afrikaans language was recognised as a distinct language in 1925. On 14 August 1942 the idea to build a monument for the Afrikaans language was announced. Due to the project's unsuccessful fundraising, three decades later, monument became a reality, an Afrikaans icon. It is claimed to be the only monument in the world dedicated to a language. 12 architects were invited to take part in the competition for the monuments design. Announced as the winner was architect Jan van Wijk, whose design reflects the best the progression of the language and presents political and cultural bloom of Afrikaans. The municipality of Paarl granted 84 hectares of land to the state, already preselected in 1963. It was west of Bretagne Rock on Paarl Mountain. The Stellenbosch Mountains lie to the south, the Hottentots Holland Mountains to the east and Table Mountain stands in the distance, this bold outline makes up for a perfect location for a monument that needed to be visible from afar. Building operations lasted two years and the structure was inaugurated in 1975, one hundred years after founding of The Genootskap van Regte Afrikaners- the Society of Real Afrikaners, formed on 14 August 1875. The total cost of construction was R700 000. 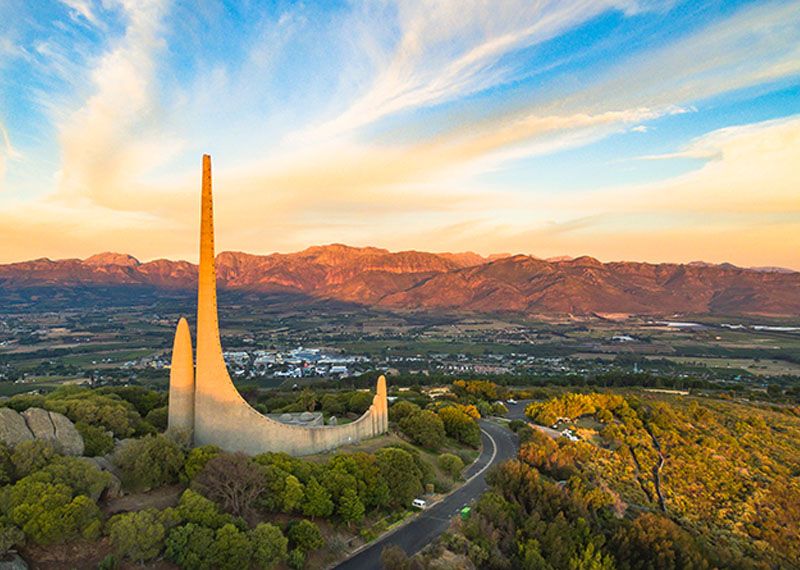 Sitting on Paarl rock, it is made from local granite and concrete, which imitates the texture of the neighbouring rocks. The surrounding is consisting of clusters of round granite rocks. Its abstract design is inspired by the works of two South African writers C.J. Langenhoven and N.P. van Wyk Louw. The structure with rounded surfaces, curving lines and ever-changing interplay of light and shade give an expression to N.P. van Wyk Louw’s words, "something which is not nothing", and is compared to the growth potential of Afrikaans language and called by C.J. Langenhoven a "rapidly ascending curve.” Afrikaans forms a bridge between the western Europe and Africa and is vehicle of communication. The monument symbolises one nation and it’s a tribute to the cultures who helped to to establish the language. Approaching the monument, a colonnade on the left side symbolizes the cultures and languages of the enlightened West. Represented by a low wall, Malayan culture and language stands out in the middle of the main steps. The magical Africa with its indigenous cultures and languages is symbolised by the three semi spheres to the right and the podium. Placed in the life-giving pool with bubbling fountain symbolizing new ideas, stands out 57 meters high main column. Nearby rises a structure symbolising two mutual enriching cultures and two languages, The South African Republic. 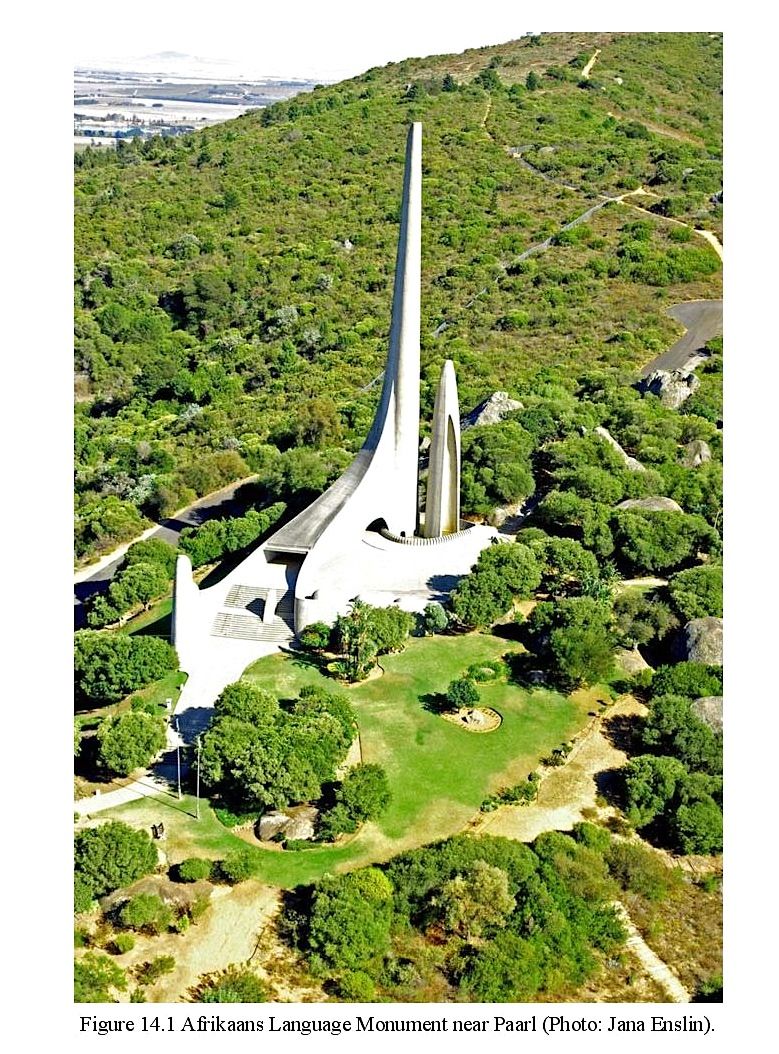 On the banks of the Berg River, Georgian style building hosts an Afrikaans language museum. It was the house of wealthy wine farmer and business man Gideon Malherbe, one of the leaders of the Genootskap van Regte Afrikaners -Society of Real Afrikaners. The rooms restored to their former state exhibit the development of Afrikaans and its various aspects. The museum, was set up to pay tribute to these, whose aims were to get Afrikaans recognised as an official language, standardise it, establish it as a written language and to begin publishing in Afrikaans. 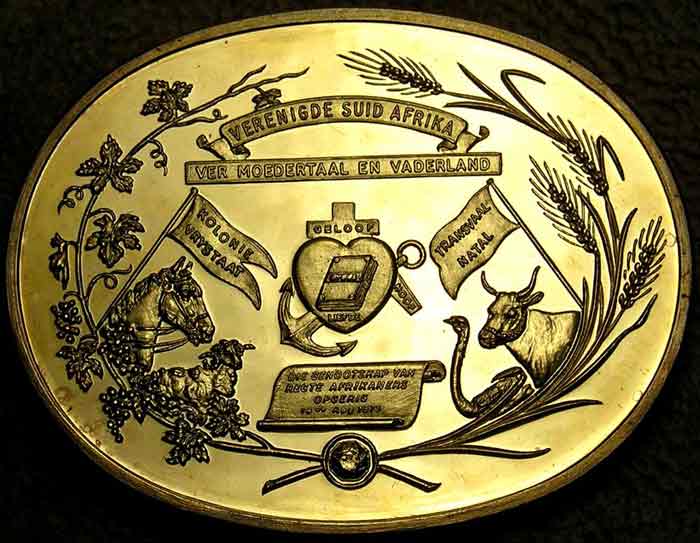 During the Apartheid, Afrikaans was the official language forced as a first language in schools and was used as means of hegemony to discriminate, dominate, and repress the Black and Coloured people. It has a violent history of oppression and there were many movements to abolish it, such as the 1976 uprising in Soweto and the more recent Afrikaans Must Fall protests in 2015 and 2016. In September 2005 in reference to the Afrikaans Language Monument, Wallpaper, The British magazine described Afrikaans as one of the ugliest languages in the world. It sparked controversy in the nation, and led to immediate reaction from Johann Rupert. South African billionaire, owner of South Africa-based company Remgro and the Swiss based company Richemont, withdrawn advertising for his luxury-goods companies.

Quite a beautiful monument. But seeing it in the middle of nowhere there, makes me sad cos it doesn't seem to be serving any purpose. The language museum, if I understood correctly, is a different thing, correct?

So is the language monument simply a symbol, or does it have other uses, like museum or exhibition center or something like that?

Very nice post and informative, Language is important, its the only way we can know someone's world. I only know two English and Spanish, also a few phrases in a few others but not enough to have a conversation. I plan on learning more. Have an awesome day!

Thanks, I am currently learning Spanish :) Glad u liked the post.

If you wish to practice lmk I'm on telegram rickthor (:

Nice text, it was a pleasure to read it! But, as a linguist, I must oppose to calling Afrikaans as the youngest language of the world. Even in Europe, You can find Macedonian (codified in mid 40s), Kashubian (eventually declared a language few decades ago), not even mentioning Montenegrin, which is, maybe, still in statu nascendi, being declared as an independent language in 2007 :)

Afrikaans is one of the youngest languages in the world.

as it's written in the text if one manages to read more than a title, hehehehe:)

Sure ;) But the title is a little bit misleading ;)

hmmm, ok might be ;P I also want to draw peoples attention ;)

Thanks for taking your time to read ;)

Nice @highonthehog. This is a fine report on the motherland. Shoutout homegirl..How long you been in the country?

I'm based in Munich, but working hard to spend more and more time in the southern hemisphere ;) Thanks for reading dear ;*

It's a pleasure pretty lady. You're welcome i the South anytime @highonthehog. Hope to see more of you..

Congratulations @highonthehog, this post is the seventh most rewarded post (based on pending payouts) in the last 12 hours written by a User account holder (accounts that hold between 0.1 and 1.0 Mega Vests). The total number of posts by User account holders during this period was 2834 and the total pending payments to posts in this category was $8751.91. To see the full list of highest paid posts across all accounts categories, click here.

and Polish is the hardest! :D

ohhh great post... in Ireland, I meet a man from south africa, he spoke afrikaans....

I really find this language so interesting, and like listening to it. Yep SouthAfricans are all over the world :)

Loved reading your post, @highonthehog and see more to get into on your page, especially Ixopo which is close to my heart. As is my moedertaal, about which I have such mixed emotions of love and pain. If nothing else, Afrikaans is to me the language of rebellion and I love hearing it stretched like toffee by so many of those who normally speak the other official languages.

Actually I was there two times and I'm sure I will come again. It is a very strong place , I have similar feelings- mixed emotions of love and pain- It was a transitional and important time of my life and I left a part of me there. Im happy to come back to SA soon to hear more of Africaans ;)

Very useful post I did not know all the names of the languages spoken in South Africa. Thanks for sharing

The development of a language can be a very boring topic, but sometimes it can also be exciting. While I was never interested in the development of the English language, I often liked to learn some facts about the development of the German language (maybe since it's my native language). It's nice to see that German has influenced such a young language. Maybe I'd even be able to understand some Afrikaans and maybe it's even worth a try to learn it.

This country is a cultural boiling pot like none, so many interesting stories ; struggle for independence, new discoveries, many different influences makes it a unique place , so also the language carries all this exciting details in it. I will definitely start learning Afrikaans .. one day ;)

I am South African born. I also grew up in an Afrikaanse town. Despite my background and being able to speak the language, I was not aware of the history. Probably should have paid more attention in school, lol. Thanks for the lesson!

Hi @exercisinghealth, thanks for reading. I am deeply fascinated by the country and always happy to discover something new. Love writing about SA and every time I do, I'm learning a lot. I‘m Polish and I bet there is many stories about Poland and polish language I am not aware of too ;)

Thanks for writing this. Such an interestring mix of languages. South African accents are my absolute favourite!