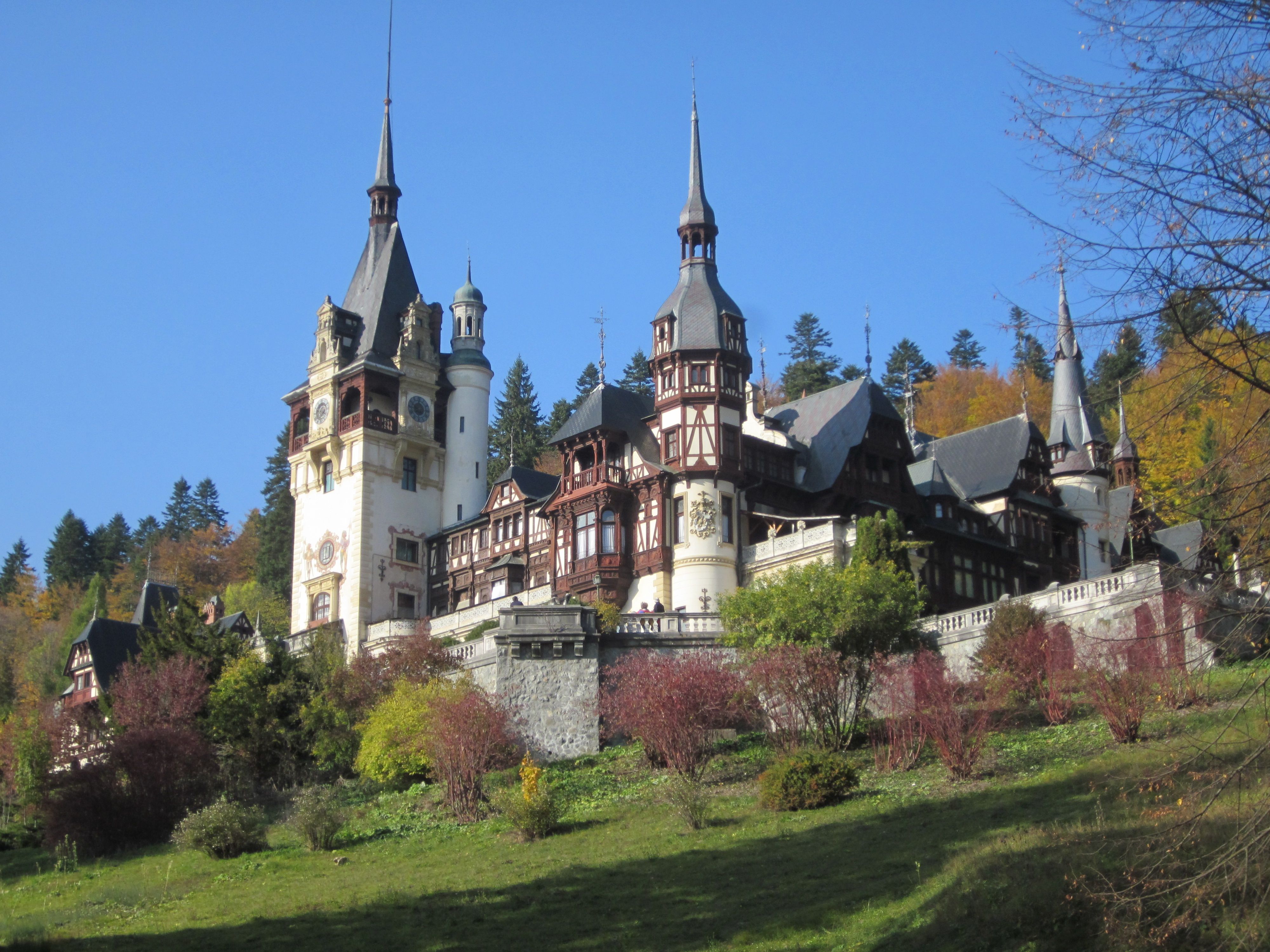 Romania is famous for its vampires. Although Hollywood made the recent vampires seems pretty cool guys, that was not the case with the real personality behind the most popular vampire in the world. Vlad Dracula was a medieval ruler in Romania. He was known for his cruelty, especially towards his enemies. The vampire was inspired by the way the real person was treating the captured enemies – he had them impaled. So, Vlad Dracula wasn’t drinking people’s blood, but he was, indeed, a scary person. We will visit the castle where the real figure was kept as a prisoner for nearly two months, and for that reason known as a Dracula’s castle. 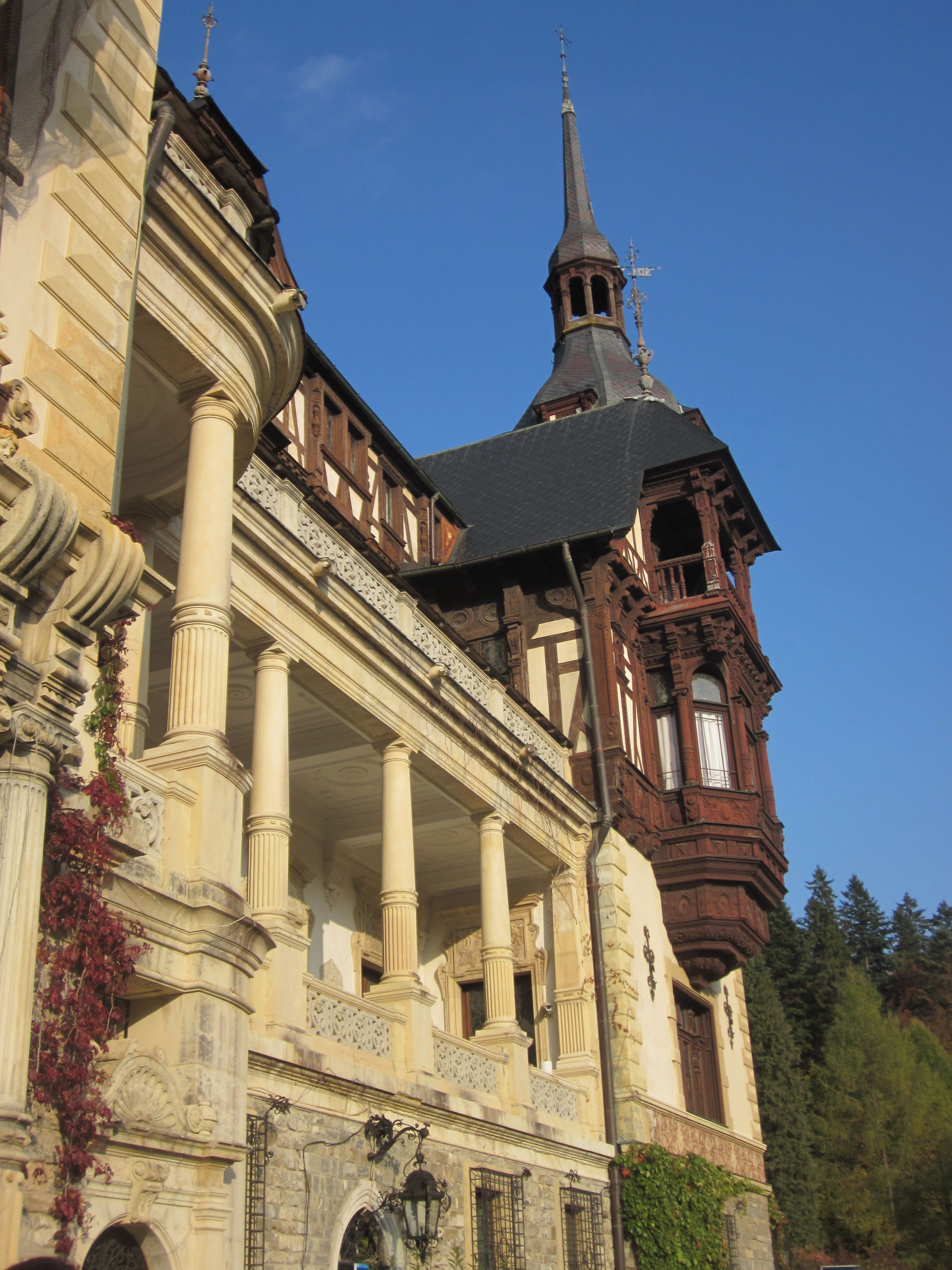 Transylvania is a historical region in the Carpathian mountain range. It is beautiful especially in the autumn when the trees change their colors. I visit it in the late October and I was quite impressed by nature, aside from the other landmarks I went to see. The most remarkable and famous buildings in the area are Peles and Bran Castles. First one is one of the best castles I have ever seen (and the one I want to live in) and the second one is Dracula’s castle. They are not far from each other so you can do both of them in one day trip, as I did. If you need to spend the night in the area I will suggest Brasov – small beautiful town. The construction of Peles Castle started in 1873. People coming from many nationalities were working to create that masterpiece. You can see it from 9 to 5, Mondays closed. It has two floors opened for sightseeing. You can pay only for the first of them, but the second one is also worth it. So if you are not on a very tight budget see them both. The price for both of the floors was less than 20 euros, as I remember. 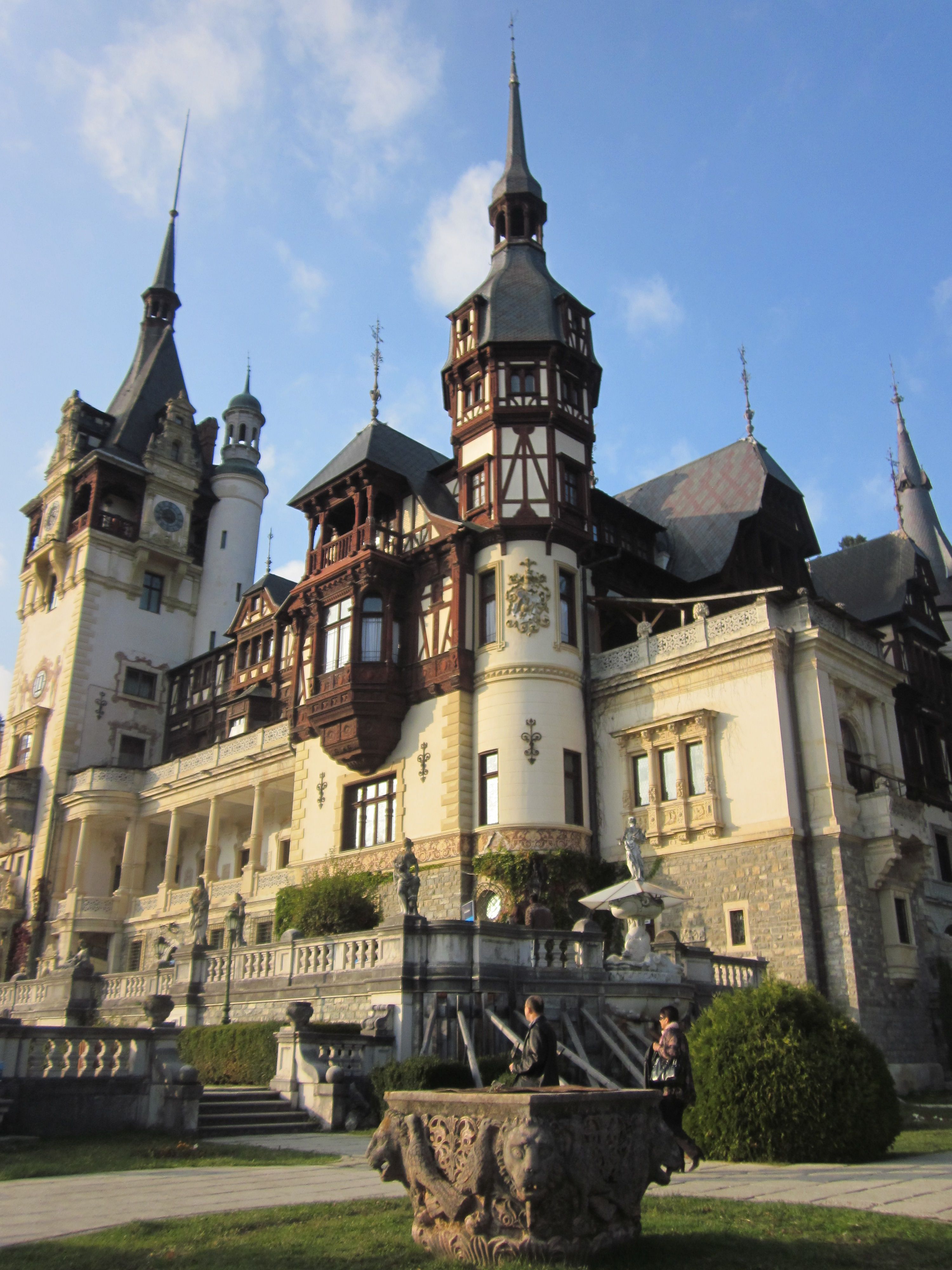 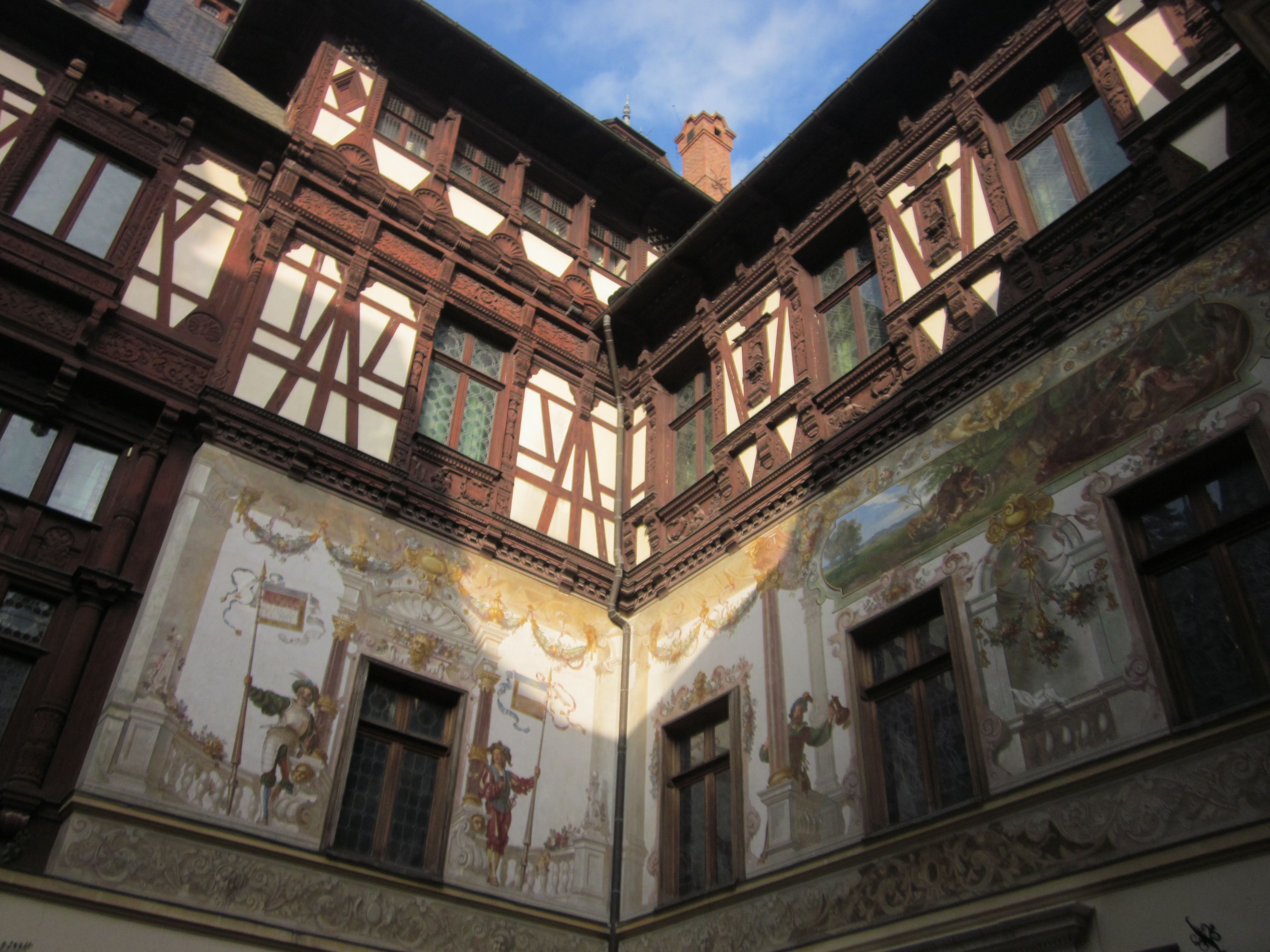 Spend time also outside. There are plenty different angles to make good shots. Plenty of small intriguing details can be found around the building. I ate delicious cake in the restaurant nearby. If you are fond of sweets you should definitely give those cakes a try. 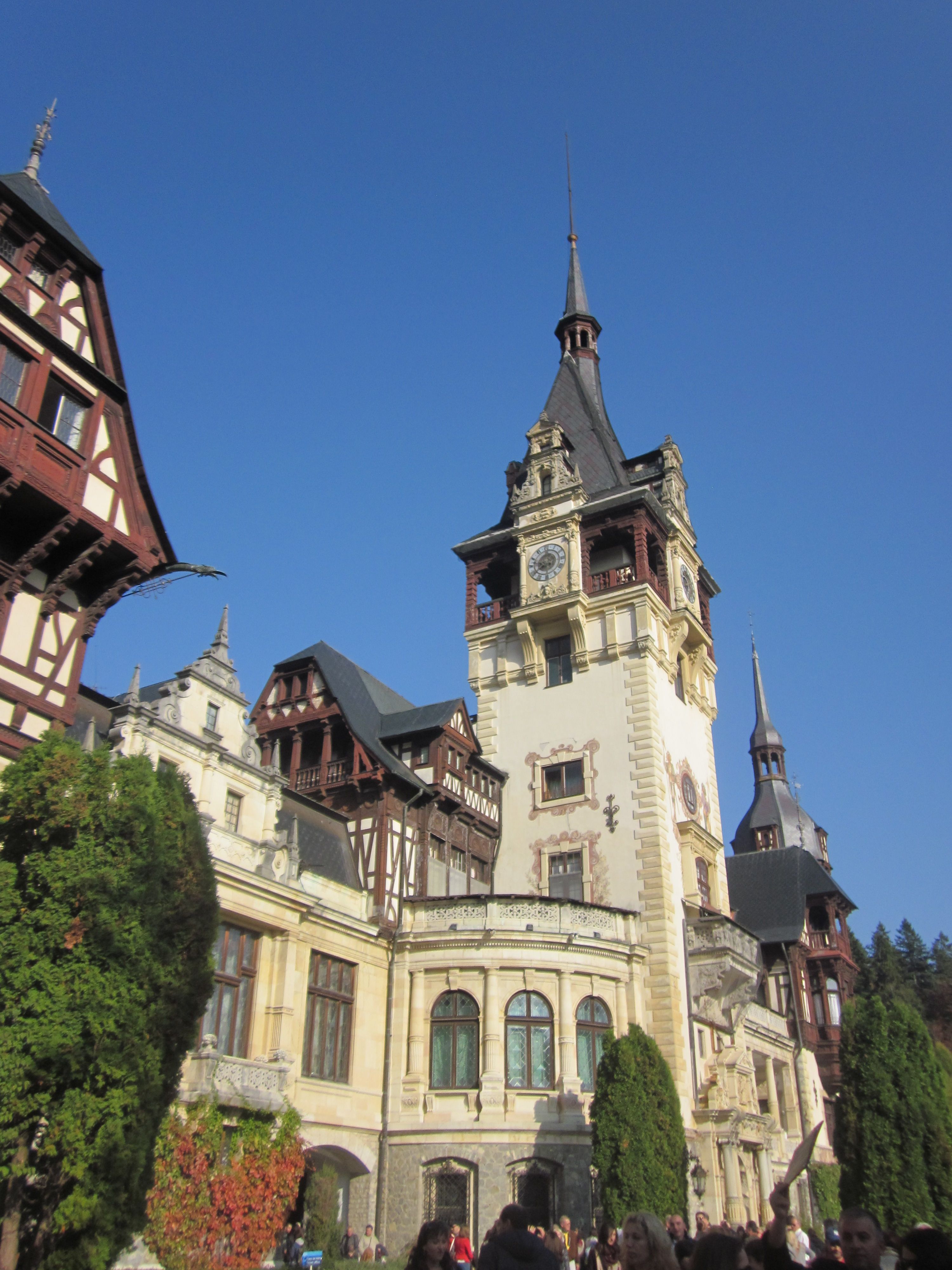 The Bran Castle might seem a little disappointing to you after Peles. Maybe it is a good idea to do it in reverse order (:. It is interesting building but it doesn’t look exactly like a castle inside. Or maybe just the Dracula story sets higher expectations. The rooms look just as in regular house and everything is quite small. But I guess people weren’t so big, anyway, in the 15th century. 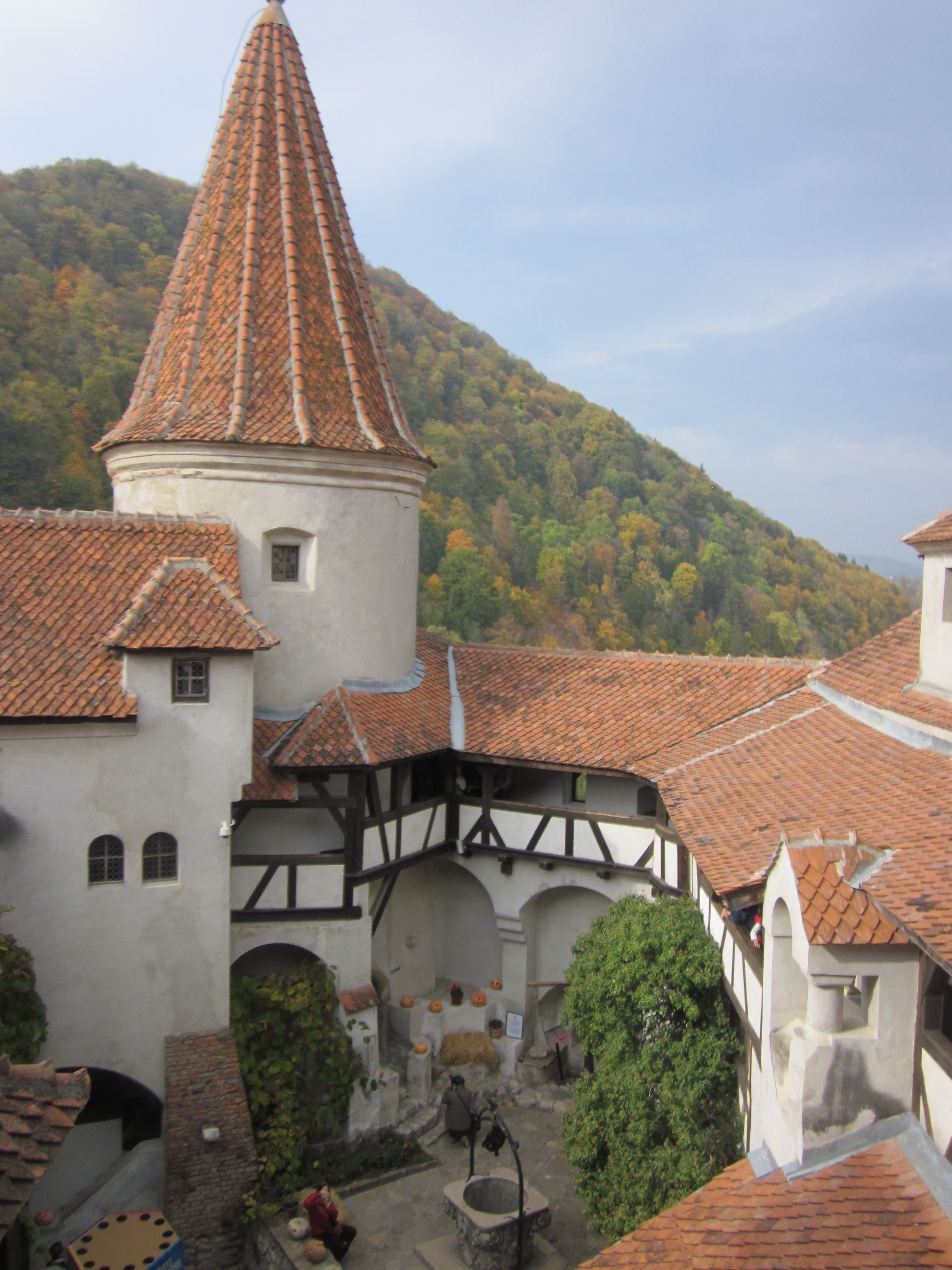 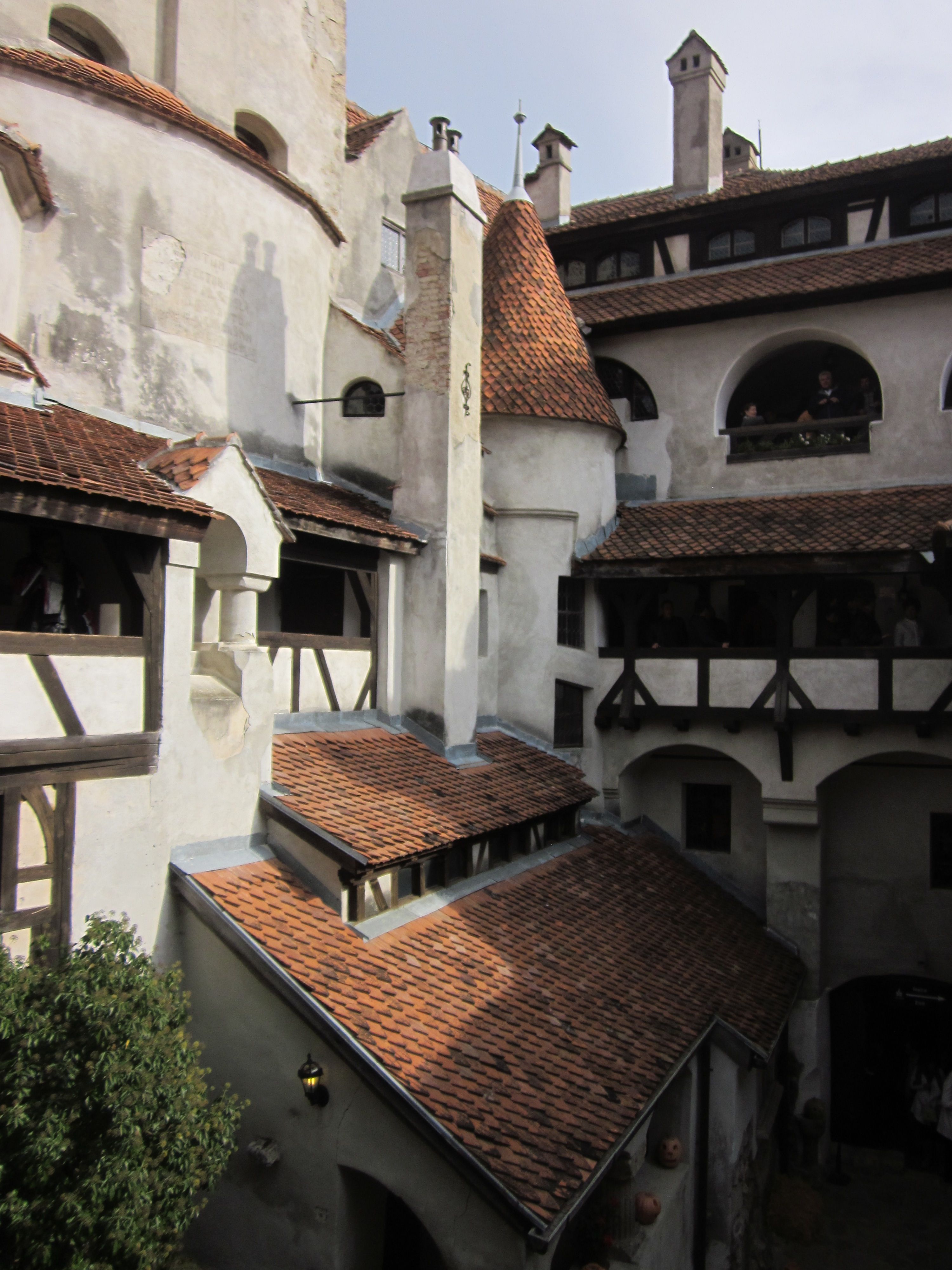 If you visit the castle around Halloween expect to meet a lot of vampires outside. I found it quite amusing and the atmosphere was really nice. I think it really suited the place to have such kind of celebration around. 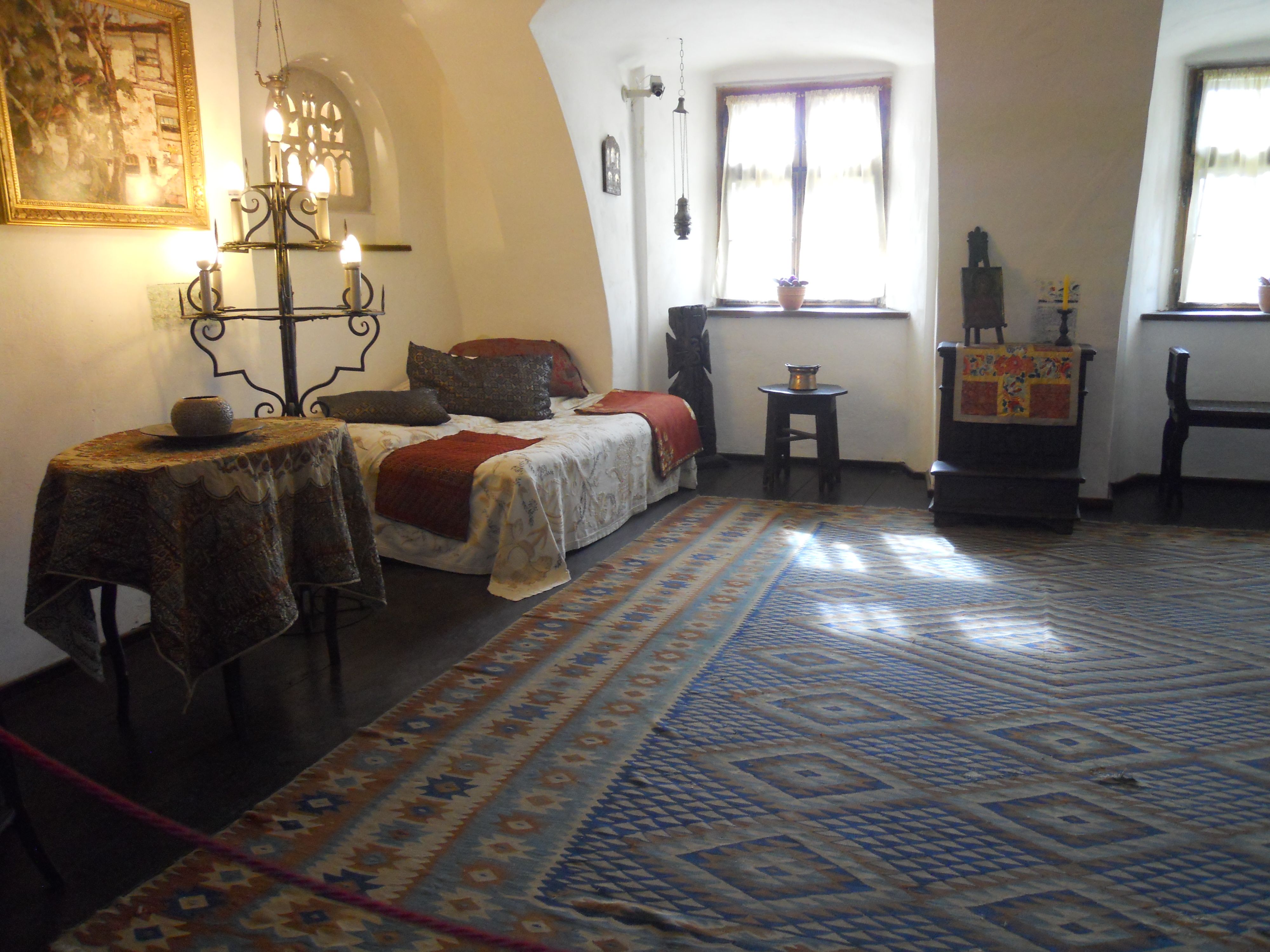 Many of the buildings in the region of Transylvania will remind you a scene from a fairytale and you will be expecting all kind of mysterious creatures appearing right next to them. Just a simple driving in the area will be rewarding enough for a day. If you are a mountain lover there are plenty of hiking trails in the Carpathian Mountains. I wasn’t prepared for trekking, but I will go back one day especially for that. The view of the mountain from the road was spectacular and I believe it is worth to be check. They have hot springs, waterfalls, lakes and also winter resorts are in place if you visit it in the season. Romania is still pretty cheap compared with the western European countries, so if I convinced you going, do it soon (: 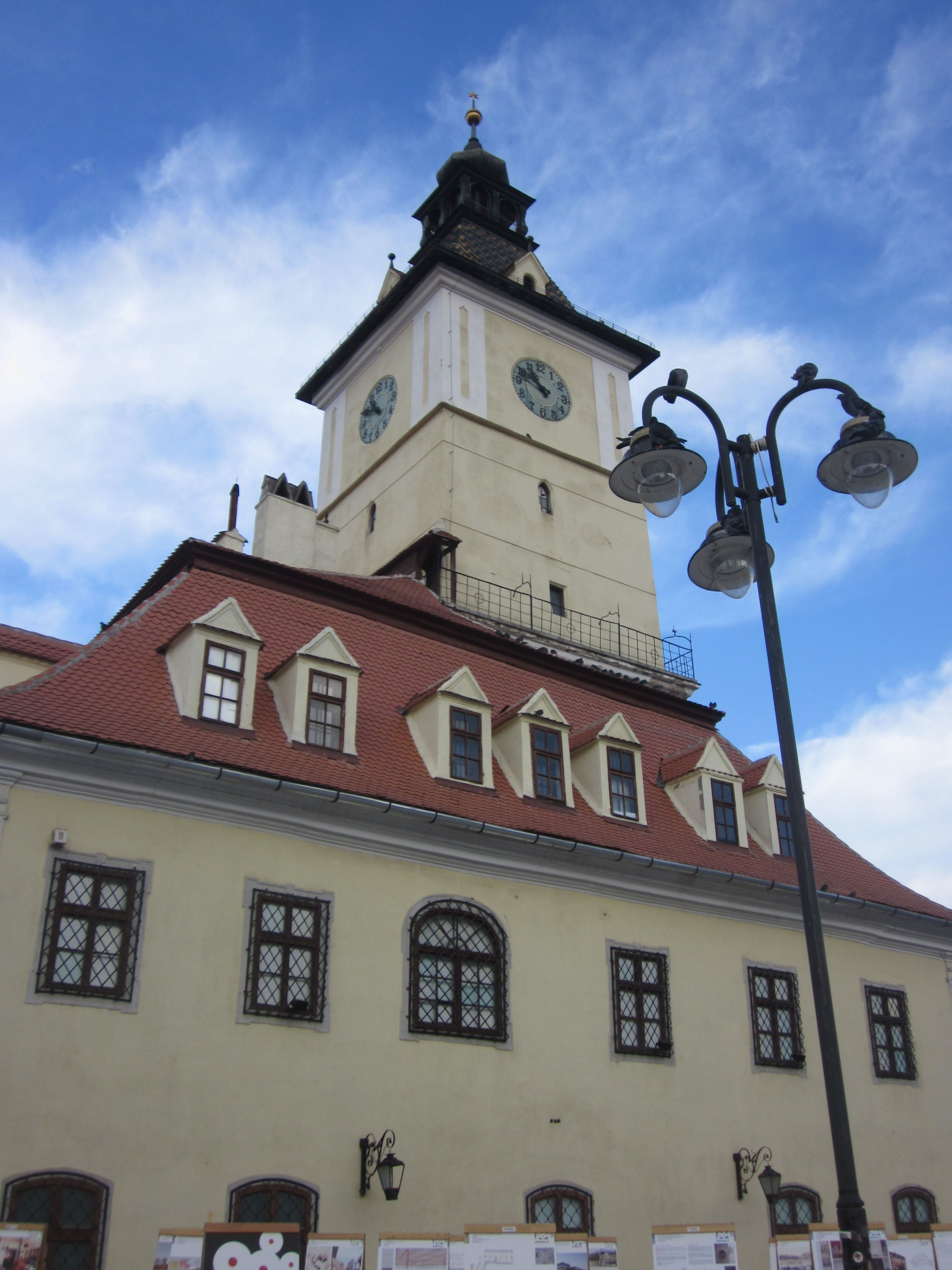 I head to Bucharest to see the largest administrative building in the world – the palace of the Parliament. It was so big, I couldn’t fit it in my camera (:. The sky was dark and even the distant pictures I made were grey and sad. If you happen to visit it and make a good shot, please share the pictures (:. What else you can see in this part of the world:
Turkey, Cappadocia

I hope you enjoyed it. Let me know if you need more information about the places. Thank you for reading and upvoting. Cheers, Eva (: 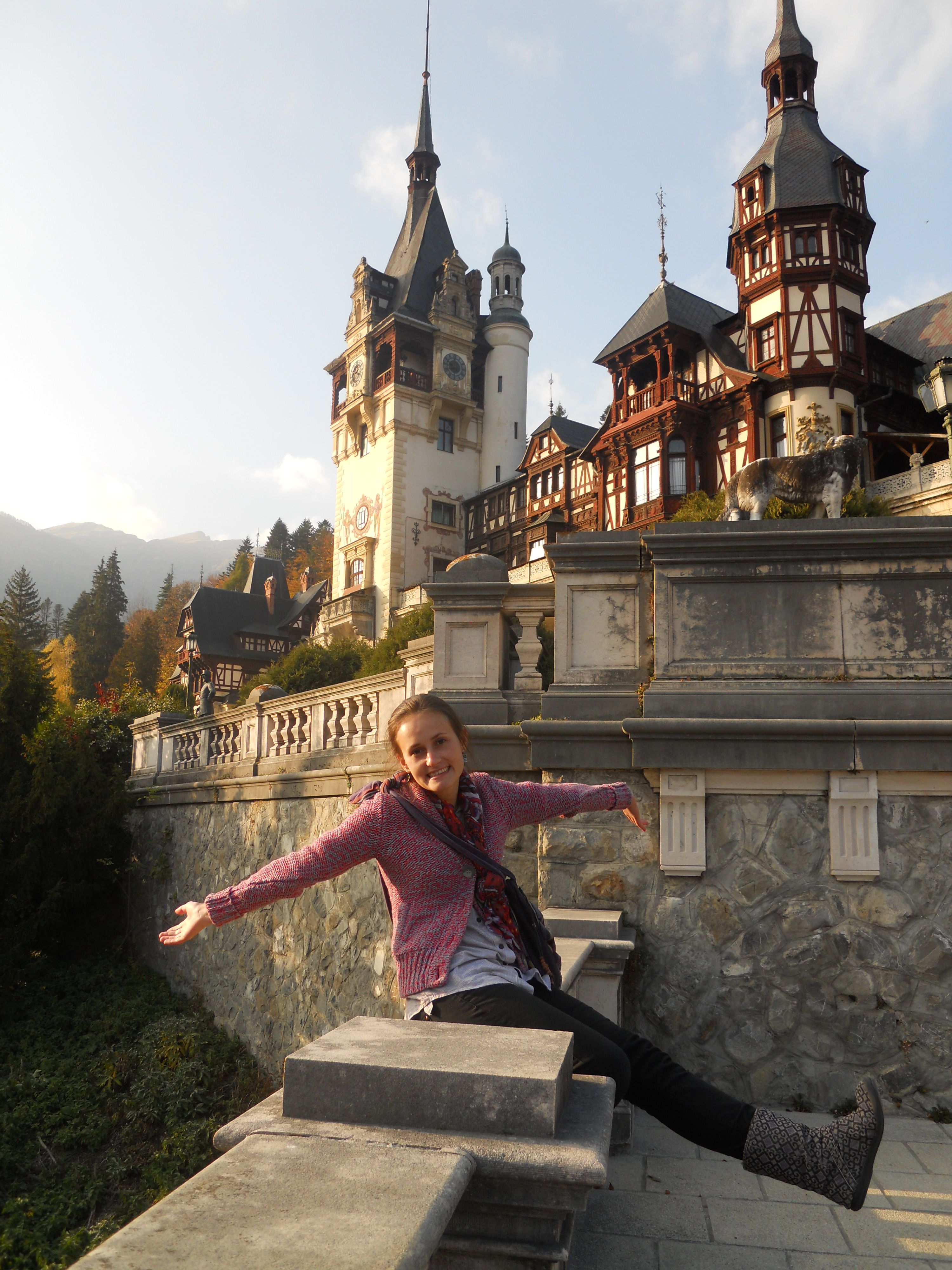 @steemitworldmap hey, Team :) @choogirl I am trying to add this post to the map but it doesn't seem to be working... Could you please have a look, maybe I do something wrong

Hi)
I'm community manager from TravelChain company and our team really liked your profile. The content you make is very interesting and referred to the main point of our company.
We would like to offer you to take part in our Bounty campaign and help us with promoting. If you will be interested, contact me via email [email protected] and I will send to you links with some information)

Another great post!! I have not been to Romania yet hope to visit it one day!

Wonderful story with great photos @best-trip-eva! I plan to visit Transylvania, so thank you for the post. :)

Have fun :) it is really beautiful :)

What an amazing trip this must have been. I really want to go to Romania to see Bran Castle, it's on my bucket list. The architecture alone is incredible, but the stories behind it (I think) even better. LOL :)

That looks beautiful eva! I always feel like I'm there following the trip through your photos :D

My parents don't want to go to places where I have been because I always flood them with pictures and information and they feel they have been there already :D I was hoping I am inspiring the others hahah

LOL I guess thats one way to react to all the photos.. well me on the other hand, I am inspired :D ❤️

Oh wow, now I want to visit Romania! All those places look so beautiful, like out of a fairy tale. I also have some nice vampire fangs at home that I frequently use to dress up on Halloween, so maybe I should add that to my bucket list :D

:) you should go!! I think pictures in Bran Castle with your costume should look really good (:

Not sure if I have a talent or I am just extremely lucky to be at the right place at the right time :) thank you for the compliment (: