Serbia is situated at the crossroads of Central and Southeast Europe. Out of around 7 million residents of Serbia, the majority lives in Northern Serbia. The capital city, Belgrade, ranks among the oldest and largest cities in Southeastern Europe.
This small country is known to the world thanks to tennis player Novak Djokovic, scientists Nikola Tesla and Mihajlo Pupin, Mileva Maric and many others. 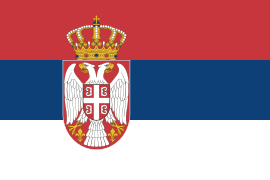 Very few of you know something more about Serbia, so I decided to dedicate this week to introducing Serbia to all of you. This is a great country and I wish to share it with you.
For day no.1 I decided to write 10 things to see in Serbia. So let's begin.

I could write all day about the great things to see in Serbia, but I'll let you see it for yourself.

I hope you like this because I am inspired to write more about Serbia. Stay tuned :)

@anjuska To be honest I've never pay any attention to Serbia or had interest to visit it. That mindset came from ignorance mainly, now if I had the chance I will definitely go there. Thanks for sharing and showing the world how amazing your country is.
PD: I'm guessing you are using other people's photographs in your post, if I'm correct you should post the credits or the source of each of them. As a photographer I really love to see my work posted everywhere but some acknowledgement and credit is the least I'll will expect.

Dear @mvjosesalazar thank you very much for the support! I thought that nobody is really interested in visiting Serbia and that's the main reason why I decided to do this and I'm glad that I changed your mind :) Also, thanks for the suggestion about the photos, I got it from Google Images but next time I will post the source for sure. :)

@anjuska
I would be sharing some pictures and wonderful facts about my homeland (Venezuela) and from my current Home (Ecuador). These countries have so many things to offer, I'm sure you'll be amazed.
It's every citizen's duty to share with the world the wonders of their country. Follow me if you want to know more!
I'm glad you've got my point with the copyright advice that I gave you.
Cheers!

I can't wait to read about Venezuela and Ecuador or any other country from their own citizens. I'll greet to you on Serbian "pozdrav" :))

Dear @drumsta the word "Kale" has a various interpretations. You must heard it from our Minister of Foreign Affairs :)) thank for the rest :*

Good to have you onboard!
You can find more people from the Balkan region in our chat. Feel free to join us and share your posts at https://discord.me/steemitslavchat

Welcome to Steemit @anjuska!
I will go to Serbia and Bosnia before I die.
It looks so beautiful, and I love the language and the traditional music.
I am American, but my great grandfather came here from Bosnia.

I'm glad you like it :) My father also comes from Bosnia, so I'm half Serbian half Bosnian :))

Congratulations @anjuska! You have completed some achievement on Steemit and have been rewarded with new badge(s) :

What an awesome post, shame you aren't getting more for your hard work. I knew none of this about Serbia except the name St Sava. We have a church here in Dallas named after St Sava.