:( The market is falling for now.. but that just means it's getting rready for a jump up again. Just like when a person crouches down right before jumping up high, or leaping forward.. yes, thats a better picture!

My account is lower than it was at the start of the week, but higher than it was a month ago.. so, progress! :) It also shows just what I've been talking about.. that btc's value can affect the account balance, even when we are winning trades. It's not directly tied together like you might think.. for example, if you win a trade for 1% gain to account, then the overall balance should now be 1% more, right? well, not so.. it all depends on the price of btc at the moment as what you really did was win 1% gain to your btc holdings, but depending on it current price, the account could still be worth more or less than you'd expect. (hard to explain, but easy to see..)

My account balance is down compared to earlier, despite having won a few trades this week. However, here you can see how I have added several open trades to my account. Meaning I have increased my 'inventory' even though my overall balance has gone the opposite way. 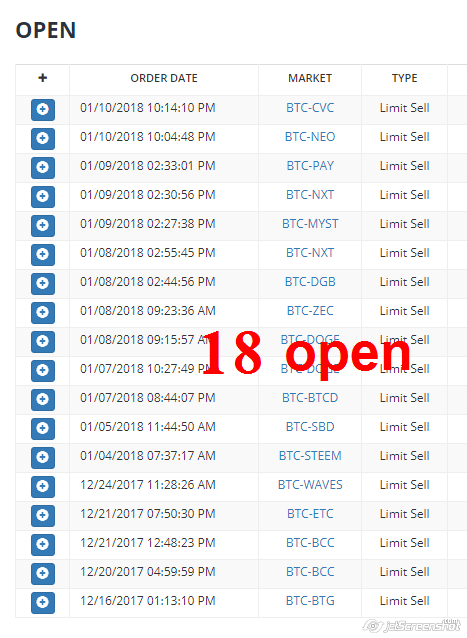 So, even though the account is down right now, compared to where it might be based on trading. I have no doubt that it will rise as btc eventually rises AND I am positioned to grow along with it. I've added to my trading with many trades.. like having a store and adding more and more inventory, and despite what the economy and value of the money is currently, your store is growing.

Lets just wait and it will go up again in no time :) Keep steeming

bloody market ;) just a sign that cryptos are on sale!! 😊😋

:P hi! u know, I go to ur blog everyday, but u hardly post. I see u resteem a few other ppl, so it's good that u are still steeming! pls post again so I can upvote u! :P

I'm not so good in trading but thanks to your posts. it helps me a lot.