Terrorism is the worst threat we ever had to face - right?

hagbardceline (60)in #terrorism • 5 years ago (edited)

With this post I would like to share some thoughts about a very scary topic: terrorism. First, please have a short look at the following pictures: Scary stuff, right? You aren't scared? You should be! Seems like terrorists are everywhere. Probably we will all die one day because of a terrorist attack. Foreign terror fighters are the worst threat we ever had to face. They are very close to wipe out our entire civilisation. Everything we believe in, everything we built with our own blood, sweat and tears. We have to act now! We have to install every surveillance system we can get our hands on immediately. We have to install video cameras everywhere. We have to hack into those terrorist's systems. I heard they sometimes use stuff like WhatsApp to plan their attacks. Our government should try to do everything it can to control every system out there. We have to close our borders...

But wait; hold on a minute. Didn't I want to let numbers do the talking? Ok, here you go: Wait; what? It's much more likely to die from eating too fast than from a terror attack (at least in the US)? For sure, the situation must be far worse in Europe. Let's see... "Terror is killing far fewer people in the UK now than it was in the 1980s". Hum... strange... but certainly the BBC will have some things to say about the real danger of terrorism.

They write: "Professor Steven Pinker from Harvard University, who studies patterns of violence, says people are disproportionately scared of terrorism. "For all the fear that terrorism generates, you're almost certainly going to die of something else," he explains. "It's small potatoes compared to all the other ways that people kill each other - wars, homicides and murders, car accidents, or just about any type of accident. "But it's designed to generate a lot of publicity. We can't turn our heads away from gory carnage and the terrorists know that. "So you get a lot of publicity generated by attacks that are horribly tragic, but kill a fraction of the number of people who die from drowning, falls, or ordinary bar room murders.""

What? Car accidents are more dangerous than terrorism? This can't be true. Let me find some numbers to prove this so-called "professor" wrong. Aha, I found a nice paper called Deaths from international terrorism compared with road crash deaths in OECD countries. Let's check out their numbers: 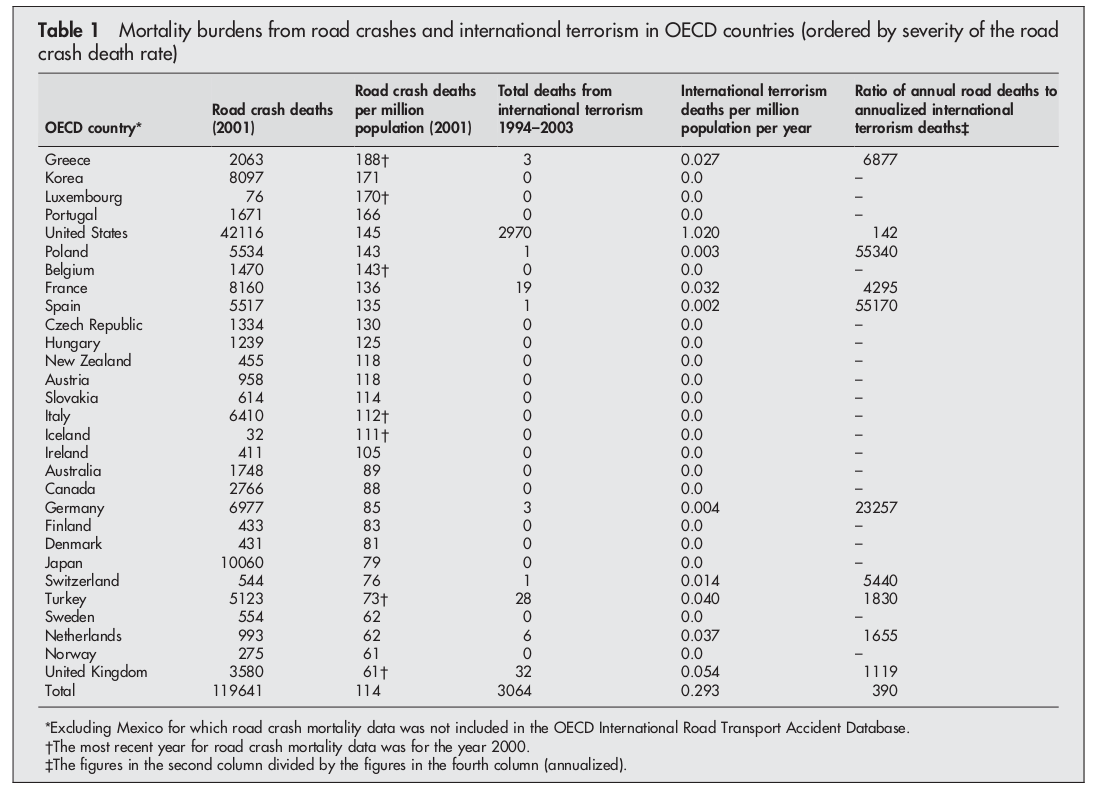 Oh... that was unexpected... Apparently, the numbers tell us that terrorism isn't such a big threat after all. What do you say? Can that be true? Is it possible that the media is lying to us? Could it even be the case that some politicians make dishonest claims? Or are the statistics flawed? Maybe those "scientists" just messed with the numbers to brainwash us. I mean, come on, after all we have heard about Bin Laden and his friends; don't we at least have a right to be a little bit scared from time to time?

If you want to feel scared of terrorism, please feel free to do so. I mean; who am I to tell you what to be scared of and what not?

Here some statistics about causes of death in Germany (year 2015):

That means to become a victim of a terror attack is statistically extremely unlikely. Ladders, stairs, cars, my own psyche are all much more dangerous (which still doesn't mean I refuse to sit in a car ... :-) )
I wonder why newspapers aren't full of cover stories about dangerous ladders, how to forbid them, fight against them and punish everybody who dares to buy one ...
It is true that if a terror attack happens, it is really terrible for all affected persons and I really feel with them and their relatives and friends, but that doesn't change my opinion that we react completely irrational. We do exactly what the terrorists want: fear them a lot and talk and read about them all the time ... As a consequence the terrorists are winning even if they are less dangerous than ordinary traffic jam: we change our behavior and restrict voluntarily our own freedom (in the seek of vain safety).

Thank you very much for your comment. That's exactly what I wanted to express with this article. Unfortunately, we keep acting irrational and the German government just recently decided to legalize the "Staatstrojaner". That's so wrong on so many levels.

Good post!
Humans just tend to fear most what looks dramactic and is mentioned on media.
That is the reason why thousands of smokers worry about terrorism instead of their self damaging behavior.
That is also the reason why some fear vaccine side-effects more than the illnessen - even if they kill hundred times more often. (see: https://steemit.com/health/@theaustrianguy/the-big-psychological-dilemma-about-the-side-effects-of-vaccines)
This is also why many fear murder more than a car crash. Even if it is really unlikely to be murdered if you live in a western country and are not involved in criminality/gangs/... .

Human irrationality will be the topic to a big post I will make in the near future. As an aspiring doctor I have to deal with it every day.

Maybe you want to check out my channel for some health news :) Followed you! Greets from Austria!

Thank you very much for this very true and interesting comment. I especially like the part about vaccines. You have a new follower now. :-)

where good article. you should check out one of noam chomskys talk about terrorism, he is a very smart guy!

Which talk are you referring to exactly?

i got no specific, i read his book rogue states, if you have time read it to! but there are dozens of videos of him talking about various topics :)

Indeed, he is a very smart man and made some significant advances in several sciences in the past.

I was woken up on 911 in a Vegas Hotel room. Quite a spectacle for sure.
I called BS within minutes, But there was no one besides my Girlfriend I could tell. Everyone else was in a state of shock, so I played along to see how it played out?
I've never been afraid of getting caught in the crossfire. But my GF purse was checked at the elevators for bombs? LOL
Good lord hehe
Nuff said
Good post
Now following for more

Thanks a lot. Doing the same now.

I'm not saying no terrorist attacks will ever happen. All I'm saying is that if one happens we would be doomed but it just isn't very likely. Thus, I would probably have reacted just as you did in that hotel.

When we lose our critical thinking ability and are forced into emotional responses through Media hype. They own us, and can force group think, to the point no one can add reason to the mix. because the next step is to tell us what must be done to ensure everyone's saftey. Like a military attack or martial law. ( Far worse than the act that created it )

I am sorry to have seen this post so late!
The numbers speak a very clear language!

Yes, they do indeed.

I always found that funny.

I wouldn't exactly call this "funny". Isn't it kind of sad?

Yes, teh stupidity of the people and their terror hystery is very sad.

A lot of people need to read this!

Thank you. I hope they will.

First of all thank you very much for this post, couldn't agree more with you.
In almost every movie disasters, attack, wars... like every evil thing that happens is caused on terrorists.

We have to stop believeing every bs the they tell us to believe and get some real research in.

But doing research is so much more work than just switching on a device of our choice and let other people do the thinking for us...

Give food end games , create fear for a common enemy , if nessesary create that enemy . thats howe you domesticate humans. Terrorists or for example airplane crashes are
Like throwing a rattlesnake between the cattle to create a stampede . You are more likely to get hurt by the stampede as that what you feared .

Freedom is living fearless in chaos .

Really interesting post, mate. In fact, when I read Peter Thiel's book "Zero to One" (which is a great read), my answer to the question "What important truth do very few people agree with you on?", was exactly this... Terrorism isn't actually that big of a danger!

Thank you for recommending this book. I'll have to read it one day. You have a new follower now. :-)

It's a quick read - well worth it if you're into business / contrarian thinking at all :D

Congratulations @hagbardceline! You have completed some achievement on Steemit and have been rewarded with new badge(s) : Today one year ago you joined SteemIt
Thank you, for making SteemIt great and Steem on for more years to come!
(You are being celebrated here)
$0.00
Reply
[-]
steemitboard (66) 4 years ago

Congratulations @hagbardceline! You have completed the following achievement on Steemit and have been rewarded with new badge(s) :

Congratulations @hagbardceline! You have completed the following achievement on the Steem blockchain and have been rewarded with new badge(s) : @hagbardceline, sorry to see you have less Steem Power.
Your level lowered and you are now a Red Fish!