“We’ve Got To DO Something About Syria!” Uh, No You Don’t. Please Don’t. 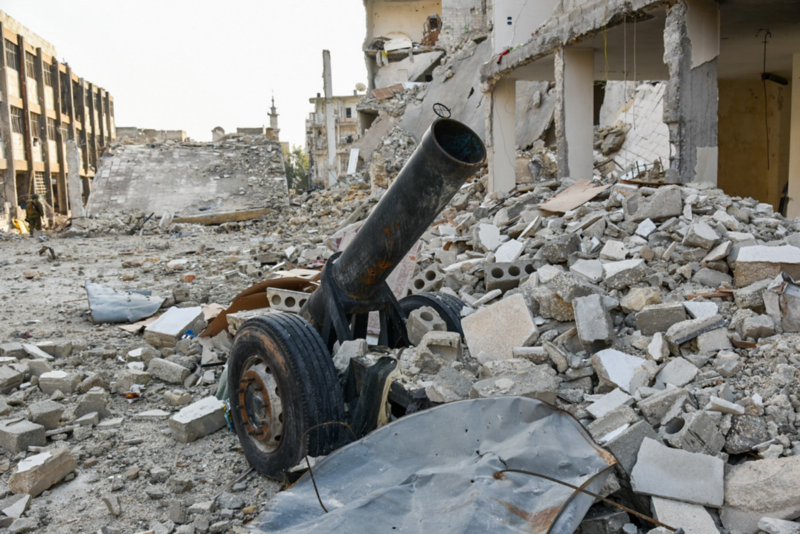 “Kindly let me help you or you will drown,” said the monkey putting the fish safely up a tree. ~ Alan Watts

"We've got to do something about Syria!" goes the common western refrain.

Actually, no you don't.

"What? You're saying we should just do nothing??" goes the common response.

Yes. Yeah that'd be great. Definitely please get as far away from Syria as possible, thanks.

The cutesy fairy tale you will hear from empire loyalists is that what started out as peaceful protests slowly morphed into a battle between the Syrian government and various terrorist factions, with the west only backing the terrorists later on in the conflict. This is false.

Last October, former Qatari Prime Minister Hamad bin Jassim bin Jaber al-Thani admitted on television that the US and its allies were actively involved in shipping weapons to violent extremist groups in Syria from the very beginning of the war there in 2011. In an article titled "The day before Deraa", the American Herald Tribune's Steven Sahiounie documents how CIA-backed foreign mercenaries/terrorists were already in place ready to go prior to the outbreak of violence in Deraa in March 2011. It is now an openly admitted fact that the CIA and US allies have been arming known terrorist factions in Syria. If you know anything about the CIA and the western war machine, none of this will surprise you.

The violence in Syria that you see today is the direct result of a deliberate and ongoing destabilization campaign by the western empire against a nation it has had marked for regime change for a very long time. The war machine which ignited this fire is working to manufacture public support for hosing it down with gasoline.

I am not an isolationist. I do not oppose NATO interventionism in Syria from any kind of right-wing paleocon perspective that nation building and interventionist wars ought to be avoided because they are expensive and create refugee crises. I oppose US-led regime change interventionism in Syria because the empire started the Syrian war and is now using lies and propaganda to manufacture support for additional use of military force with the goal of preventing Syria and its allies from restoring stability to the nation. These hand-wringing "won't someone think of the children" intervention advocates are calling for even more killing and destruction by the very empire which ignited and perpetuated the killing and destruction in the first place.

If you ever want to make sure you're on the correct side of history regarding foreign policy, just look at what the neocon think tanks and liberal interventionists are advocating, and then advocate the exact opposite. US-led regime change interventionism always makes things worse, never accomplishes what its proponents claim it will accomplish, and inflicts additional death and suffering upon innocent people in a way that always benefits the rich and powerful of the western empire. And when the intervention fails to unfold as its proponents promised, as it literally always does, they say "mistakes were made" and blame it on the mismanagement of whomever happened to be in charge at the time.

It's a brilliant scheme, really. All these predators needed to do was secure the congressional Authorization for Use of Military Force Against Terrorists in the wake of the September 11 attacks, and now the US-centralized empire can set up permanent military encampments in any strategic location by simply flooding the area with terrorists. This is exactly what it did in Syria, and now the US has a permanent military presence there with the stated goal of effecting regime change.

This has never been about "saving children"; this is about money, power, and resources, which are all of course ultimately the same thing as far as the empire is concerned. Longtime US rival Russia has recently been awarded exclusive rights to oil and gas production in Syria in return for its efforts in helping its longtime ally stop the regime change, a predictable step in the fight for fossil fuel dominance in the region. Syria’s border dispute with Israel over the Golan Heights means that Israel has every reason to want to keep Syria destabilized, not only because the Golan Heights contains oil but because it provides a third of Israel’s water supply. Bashar al-Assad also launched what he called his “Five Seas Vision” in 2004, a strategy to use Syria’s supreme geographic location to become an economic superpower. Such a plan wouldn’t sit well with the US hegemon, which can only maintain its dominance by keeping other nations down.

"Once the economic space between Syria, Turkey, Iraq and Iran becomes integrated, linking the Mediterranean, the Caspian Sea, the Black Sea and the Arabian Gulf, will not only be important in the Middle East," Assad once famously said in 2009. "When these seas are connected, we will become the inevitable intersection of the whole world in investment, transportation, and more."

It's not hard to imagine how the imperialists would suddenly accelerate the urgency of removing Assad once he began speaking like that. Go try and find anything damning about Bashar al-Assad in the western mainstream media prior to 2009. You'll find a bunch of positive expressions, including a nomination for honorary knighthood in 2002 by British Prime Minister Tony Blair. Interesting how he then suddenly transformed overnight into a bloodthirsty sexual sadist who gets off on gassing children to death for no reason.

Every time there's a crucial conflict unfolding in Syria where the government is trying to fight the violent extremists the empire inflicted upon that nation, we are saturated in propaganda about how much Assad loves murdering children. At the end of 2016 it was Aleppo, about which we were lied to extensively. Now it is Eastern Ghouta, about which you'll see establishment loyalists from The Guardian and Mother Jones attacking anyone who expresses any skepticism of establishment narratives while cranking out articles with titles like "Waiting for Putin and Assad to run out of people to kill. Is that our plan?"

Rank-and-file victims of western mass media psyops believe that the west ought to "do something" in Syria because someone needs to rescue those poor children, but the reality is that their own government is responsible for creating and perpetuating that violence and they only believe what they believe about Syria because the oligarchs can't come right out and say "We need to keep that region destabilized or effect regime change in order to secure resource control and geopolitical dominance over our rivals." They make it about rescuing children because the truth would make any decent person fall to their knees vomiting.

Be very clear what you are demanding when you say "we need to do something" about Syria. You are not saying we need to go in and hug children and hold umbrellas over the heads of civilians to make sure that they don't get hit by explosives in the crossfire. You are saying we need to go in there and kill anyone who gets in the way, kill Syrian soldiers, kill Assad, and take control of the nation in a way that will benefit nobody but a few wealthy elites, all while causing even worse civilian casualties than are currently being experienced because that's what war does. That's what your cutesy little "we must do something to save the children" sentiment is calling for. Acknowledging this doesn't make you an "Assadist" or a "Putin puppet" or a crazy conspiracy theorist, it makes you a normal, healthy human being. The western war machine has an extensive history of using lies, false flags and propaganda to manufacture support for lucrative military interventions, and it is undoubtedly lying to us about Syria today. The only just outcome in this conflict is to allow the Syrian government and its allies to restore stability to the region and undo the damage that the west has done.

The fact that the US and its allies are now openly admitting to having armed known terrorist factions in Syria and are still somehow asking you to trust them should elicit nothing other than a full belly laugh right in their face. Anyone in a NATO-allied country saying "we need to do something in Syria" should receive the same instant recoil as a known child rapist asking you to let him babysit your kids. No, western empire, you do not need to "do something" in Syria. You need to get the fuck out and stay out.

To say the USA’s intervention in Iraq, Libya or Syria has been a failure, is to miss the point of the intervention. From those set to benefit – ie the big club that you nor I will ever be, or ever wish to be, a member of – those interventions are probably viewed as remarkable success stories.

I’m certain that the entire War on Terror narrative is something that Edward Bernays would be amazingly proud of.

Absolutely right. It is astounding, to me, how many in the U.S. are completely in the dark about all this. Very decent people, well educated, who don't recognize the "news" as propaganda. The U.S. never recovered from the Vietnam war, never faced the duplicity, never had the chance to forgive those who never admitted the lying and stupidity. The country has been in decline ever since. Those who might have made a difference sold out. Lying has become a cultural hallmark. Cheating is how you get ahead. Etc. Eating the seedcorn. Way out in the country, where living is hard, there are still pockets of community that live by the old rural ways, where a person's word is his/her bond, and so on. I'm guessing that Australia is on a similar path but maybe not quite so far along. Here in the U.S., even in especially progressive areas, you are either in despair or your head is in the sand.
Thanks for telling the truth. This Steemit post shows up as a Top Story from Steemit on Google. How cool is that! @ironshield

The only thing we need to kill is our country's brutal killing machine, which is after incredible profit & dominance -- & the unceasing lies it buries us with in order to get these. Thanks again for holding the torch of reason Caitlin!!

If the US had wanted to see a regime change in Syria it would have been done way before Assad offered up Russia a stake in the game.

This. Exactly all of this.

International community should stand for syria, please save them...
https://steemit.com/syria/@angelina-jolie/save-the-syrian-children