Too Much Heat… (AKA -- One Big Score) original short story 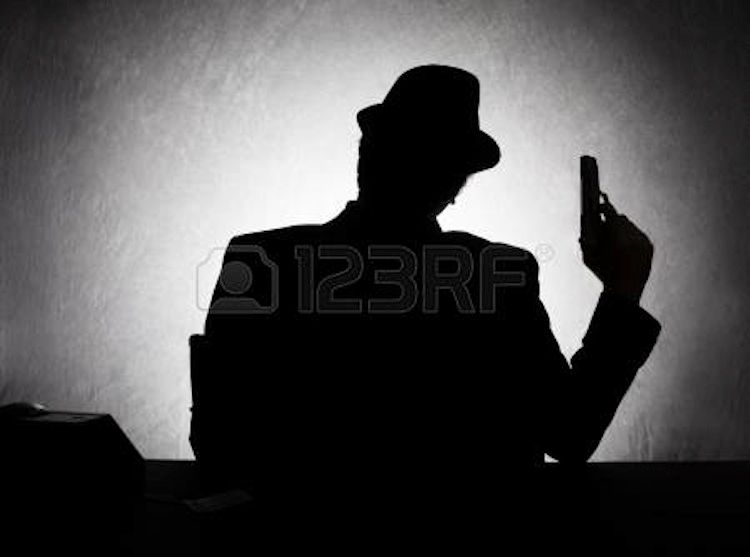 Gangsters.., in a lot of ways are not much different than you and me… And back in the 1960's and 70's they lived and died by a certain code of honor -- some weird form of honor. We've all heard it before -- "honor among thieves…" Even though, many of these "gangsters" had the morals of a sociopath, would gut you like a pig.., and not lose a wink a of sleep -- they knew when they "signed-up" for this way of life.., there were rules, rules you agreed to follow -- the day you decided to be a gangster.

Long before Omertà was made a popular by the Cosa Nostra -- the Mafia.., it was a code of honor, a categorical prohibition of cooperation with state authorities or reliance on its services, even when one has been victim of a crime… Usually by people that had been failed, failed by a failed system.., and when the system fails you, you can do one or two things -- find a system that works.., or make your own system.

But Jimmy Conway.., the boy that had never wanted to be anything -- but a gangster.., he did both… Never knowing his father, his mother a whore -- Jimmy was raised in the system that was failing it's children, its most vulnerable, everyday… In and out of different foster homes, being abused mentally, physically and sexually -- even when he finally found a family that loved him as one of their own, they were taken from him and he blamed himself, for their deaths… It was the streets from there on out.., Jimmy would learn about life from the streets -- his whole life he never gotta freakin' break -- he never had a thing.

And when you have.., nothing to lose -- you are one dangerous son-of-a-bitch!

But even achieving the only thing he ever wanted.., he knew he could never be a "true" member of the "family." Even though they (the Mafia) accepted him as one of their most prolific earners -- being Irish he could never really be, one of them… He knew, one day would come.., where he would part ways with this, latest adopted "family..,"

Make no mistake about it.., Jimmy Conway was killer -- a stone cold killer. Jimmy excelled at every part of being a gangster, he lived and breathed it -- he was respected for it. But just like you and me (even though most of us will never have to - gut someone like a pig).., he wanted that -- one big score.., that one job, that sets you up for life!

So when the the score of a lifetime came along -- there was no way Jimmy could pass it up… And being -- The King of Airport Robberies, there was nobody better to take down this score.., he had the whole airport, wired -- from pilots to baggage handlers.., and all of the truck drivers were scared shit of him… Jimmy got famous hijacking 3 or 4 trucks a week.., this was it -- this was the big score he had been waiting for…

A sheik or prince.., flying in on his private plane filled with 2-4 hundred million dollars in unmarked cash and untraceable diamonds -- it was a crime, if pulled-off correctly, it would never even be reported to the authorities. After all, you don't fly around with that much doe, for any legal purposes -- this sheik probably wasn't even supposed to be in the country… As long as nobody got killed they would walk away scot-free.

Jimmy assembled a crew.., and the night of the robbery -- they just drove a black, sort-of, official looking van, right-up to the private landing strip.., and took this guy down just like any other armed robbery. It couldn't have been going smoother.., and just as they finished loading up all the loot, one of the sheiks security guys, spit on one of Jimmy's crew… Without evening thinking, this guy put a bullet right in his head --

When do things EVER go as planned…

They did it.., they got a away clean -- but the heat that was to come, was something nobody ever imagined… Turns out the guy that got shot in the head was the sheiks son -- destined to be someone very important.., and here with his extremely wealthy Daddy to buy some very sophisticated weapons, from some very important people…

What you don't know about this heist.., what they never wanted anybody to know about this heist was -- It was all BULLSHIT! This is (was) the heist we all know as the famous Lufthansa Heist from Kennedy Airport. Immediately, the story came out that Lufthansa was hit for about five million dollars (which that alone was huge money). It was all over the media LUFTHANSA - LUFTHANSA - LUFTHANSA… It became one of the most robberies of all time.., and it was -- ALL BULLSHIT! The powers that be.., could not have the real story come out -- a high level government official selling weapons to some sheik for cash and diamonds, wouldn't play so well in the media.., and could risk exposing secrets, that needed to remain secrets… So they created the whole Lufthansa heist -- in the name of "national security." Lets just say.., they made Lufthansa -- an offer they could not refuse.., and then just sold it to the media -- and they took care of the rest.

So the famous heist we've all heard, read, seen movies about -- NEVER HAPPENED.., it was just a cover story, for the sleazy / sketchy dealings of our government, putting the very troops it sends off to war to fight their fabricated battles, at greater risk of harm or death -- just to fatten the wallets of their donors.

That was something they NEEDED to keep quiet...

And we all bought it -- hook, line and sinker! There was no reason not to believe it.., the robbery they created, was sensational in its own right -- it gave everybody what they wanted… It gave the media a juicy story to tell night after night, Luthansa got whatever it wanted.., and the powers that be got to keep their dirty little secret. Everybody was happy except --

The heat that not only came down on Jimmy, but all of the 5 families was insane.., he knew the Mafia hated any kind of press -- the spotlight. And now the light had just been turned-up on all of the Mafia's illegal activities -- Jimmy could feel the walls closing in around him.., and he knew they would soon be parting ways.

One by one, the crew that had pulled-of the biggest heist ever -- started turning up dead. The cops knew that because it happened at the airport, that Jimmy had to be involved, somehow.., but they weren't sure if it was Jimmy getting rid of everyone, the the families had decided to clean up the mess, themselves -- or maybe it was the government tying-up all the loose-ends. After everyone from the job but Jimmy had been killed, he knew as soon as heard the phone ring -- he was being called for…

He knew the rules -- he knew the people that would be waiting for him, would be the closest thing to a family, he had ever known. He respected the fact, that at least, they had never lied to him about how it could turn out.., but he also knew he was always an outsider and if he was going to die, he wanted it to be by his own hand -- he had never really had anything but himself… So, as he walked into the social club -- the place he would die.., they were all there, all typical guys he would have expected to pull the trigger… But before they could do anything.., Jimmy whipped out his own gun --

…and the story goes -- before he put it in his mouth, he smiled and said -- "be careful what you wish for, right…(chuckled)" than he blew his own brains out!

Just like most of us.., all Jimmy was looking for, was that -- one big score, so we can live happily ever after… But when do things ever go as planned -- he knew the rules, he lived by a code… In the end, it was simple.., the heist of a lifetime, that he hoped, prayed and dreamed for.., just brought -- too much heat.

You have a real talent for writing! I always enjoy reading your stories and poems! Keep em’ coming!!!