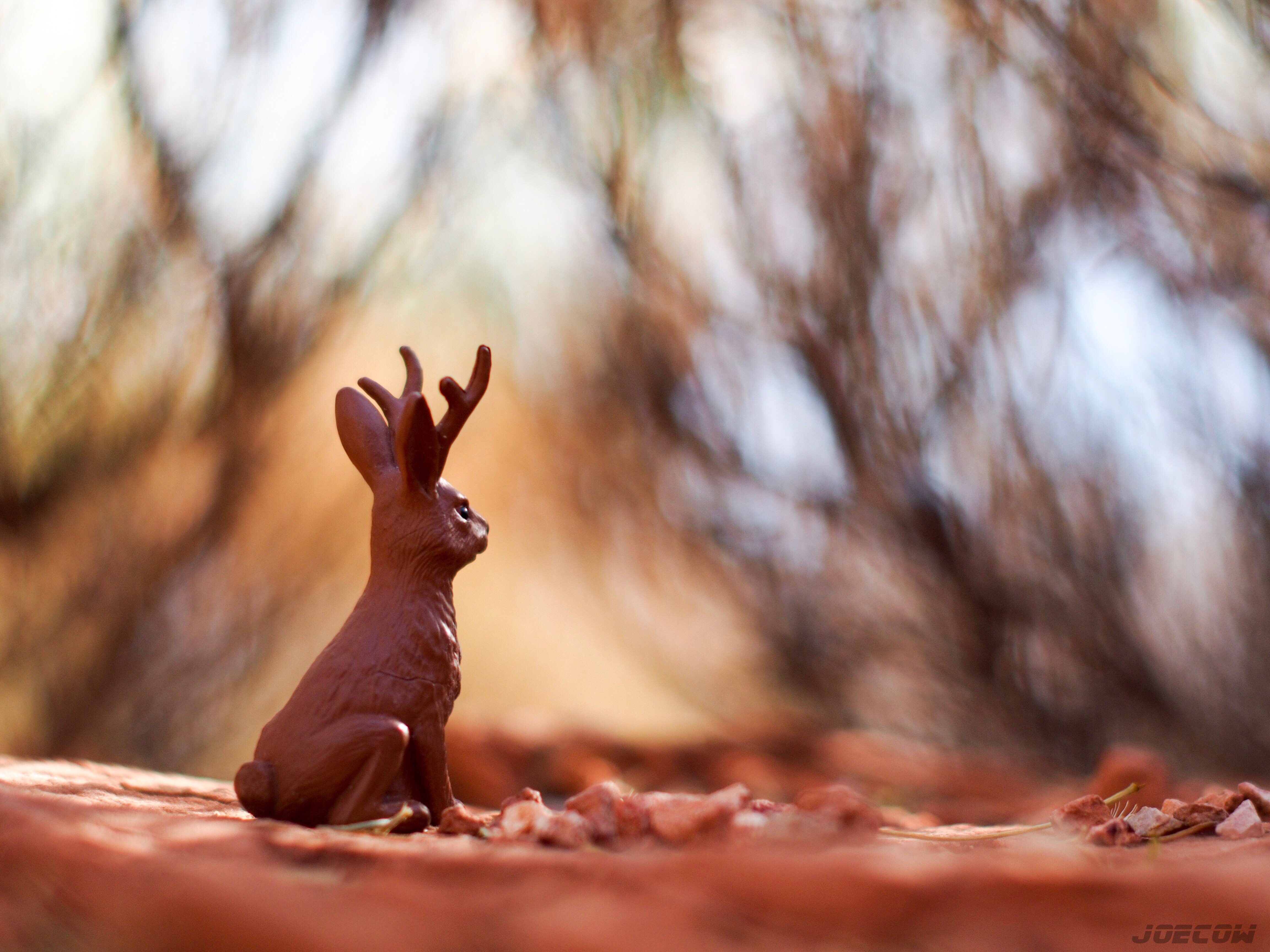 One day there was a Jackrabbit named Ernie. He was a super fast jackrabbit. He would rush from one bush to the other as a blurry streak of fur and ears. His nose twitching and his ears darting every which way to hear dangers before they were upon him.

Ernie lived in a comfortable little burrow he had scratched out between a monstrous Sagebrush and a thick shady rabbit brush that covered his scent almost year round. When he left in the mornings he paused at his exit and poked his ears through the hole. He would twitch them about to hear in every direction. He would then slowly exit the comfy hole. He darted from bush to bush munching on desert flora.

One day while he was paused under a sage near a large ant hill, he heard something strange - a rumbling of sorts. He ducked under the bush flattening his ears as a rushing wind blew past. A blur of rushing noise was upon him in an instant and then it was echoing in the distance.

A small heard of Antelope had been spooked by an SUV ripping up a dirt road and creating a rooster tail of dust that could be seen for twenty miles in the stretched out desert basin. The mountains gradually rose to their peaks making the roads look as if they were strings pulled tight from end to end. The Antelope had been enjoying some fresh grass on the edge of a hard pan when the strange creature erupted from behind a low rise of Joshua trees. It spooked them into stampede and they blindly ran towards the silence ahead. Away from the noise that was gaining on them. They darted in a straight line until they new they couldn’t outrun it - then sharply turned to the west perpendicular to the road.

The creature went on it’s way barreling down the road. The Antelope kicked up a cloud of dust as they came to a rest near a clearing of Sagebrush. One of them noticed a furry shadow under a sage, a rabbit, staring in awe and twitching his nose as his whiskers fluttered in a sudden breeze.

Ernie was astonished by the sleek look of the Antelope and their speedy arrival. He wasn’t tall enough to see over the brush so his view of the valley was very skewed moving from bush to bush. If he could move like those Antelope; he could scale the entire Valley in an instant. It was a beautiful thought. As he stared at the Antelope they all suddenly looked up in unison as a loud booming scream broke the silence. The scream of a thousand ravens followed by a white tail chasing across the sky. This creature was faster than all of them and once again spooked the Antelope.

Ernie sped from bush to bush trying to at least keep the Antelope within sight or at least sound. He could hear the crunching of sage as the Antelope hoped and leaped over them. The loud thundering sounds of the creature above came by occasionally and had never hurt Ernie so he brushed off the encounter and kept his ears pointed in the direction the Antelope disappeared from view. The sounds of crunching got softer and softer as they faded in the distance. He was fast but he felt slow like a caterpillar inching a leaf when compared to those Antelope.

The sounds abruptly stopped and he knew the Antelope felt they were out of danger from above. They must have reached the Joshua tree forest where the land slowly rose toward the mountains. Ernie wasn’t too fast compared to them but he was excellent at moving swift and stealthily. He reached the clearing where the herd had paused and he again stared in awe. He so wished he could somehow acquire their speed. He studied their skiddish movements and noticed their horns for the first time. He thought these horns must give them their swiftness!

He watched and was pleasantly surprised to see them rubbing their horns on the Joshua trees. Some of the antlers came off and landed with a thump near the base. Ernie could barely contain the urge to burst into the clearing and skim towards the horns but he stifled the burst of energy out of his keen sense of staying hidden.

The creature of the sky erupted as a coyote yelp in the ear. Loud and piercing and very intimidating. Ernie dropped his ears immediately and the Antelope bursted into flight once again. Ernie held his cool in the shadows of the sage and calmly twitched his nose. His eyes were directly upon the antler spikes about fifty hops from his position. He cautiously made his way from bush to bush avoiding sight and pausing to nibble a tasty splurge of a favorite flower he couldn’t pass up.

He reached the spikes and sniffed them uneasily. How on earth did they work? How did something that resembled a stubby stick lend to such speed? He was stumped. He carefully grasped the horns with his teeth and started back to his burrow. It was slow going. He had at first jetted in excited blur only to be flipped end over end when the horn caught a stray twig hanging low. He had to slow it down to avoid such painful errors.

When he finally reached his burrow it was a sight for pleasant eyes. It was very taxing to cover so much land in such a slow debilitating way. His nerves were wrought with the flight response screaming with every breeze, every bug landing near, every tickle of a beetle. He was at his wits end when he finally dipped into the burrow. He set the horns near him as he slept the cool evening away.

He awoke with a start. Something was different. His head seemed unbalanced. Maybe it was carrying the horns for so long... the horns! He turned to where he left them and nothing. They were gone!? But where? All that work wasted for nothing? He raised his head to leave the burrow and something struck him from above! He wrangled around a bit and covered himself in fresh dirt. He bent and looked up to see strange scratch marks etched in his burrow ceiling.

He struggled out of the burrow ramp scraping and dragging the etch marks towards the entrance and into the morning light. The sun was still rather low and the shadows of the mountains still stretched nearly half of the Valley. But that was not the shadow that interested him. In the corner of his peripheral vision he noticed vaguely his familiar shadow but something was amiss. Near his ear shadows there were long jagged sticklike shadows! He twitched his ears and the fwapped against something hard attached to his head!? Something was eating him!?

He ran in terror. More swift than ever before. His vision blurred as the bushes turned into streaks of blueish grey mixed with yellow and creme swirl color. He stopped. He was suddenly at the Joshua tree grove. Not possible... he had covered the distance in a fraction of the time as before with agility never before seen in avoiding obstacles in his path. He turned his back toward the sun and viewed his shadow full on. He pressed his ears back and in awe he recognized the shadows now protruding from his head.

I figure a crypto based community needs some cryptozoology infused in it!

If you enjoyed this short story of mine please feel free to comment, upvote, and resteem!