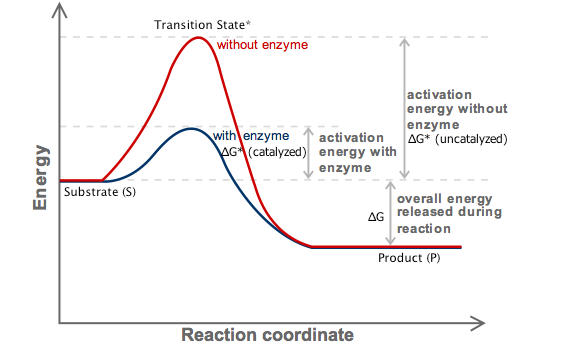 credit: chemicool
Catalysts serves to as enhancers and acts to speed up these reactions; but the awesome thing is, they are not affected in this process, for a complete definition, catalysts are substances/compounds which speeds up the rate of chemical reactions without itself being affected in the process.

These are priceless components of some naturally occurring slow reactions; as a science student, you must have heard about iron filling that speeds up the reaction between toluene and bromine which are normally nonreactive or takes a lot of time to react, however, these iron fillings Image credit: Amazon
reacts with bromine to form iron bromide (FeBr3) and hence iron fillings are not regarded as complete catalysts in this respect, but apart from iron fillings, there are countless number if chemical catalysts which we can find naturally or can be synthesized in the laboratory.

Apart from these inorganic elements, there are so many compound chemical catalysts available, these increase the rate at which chemical reactions occurs; enzymes are also very good examples of catalysts. Image credit: Wikipedia
Enzymes are produced in a relatively small quantity, they are essential components of every cells in the body, not actually every cells, but every compartments in the body cells, the presence of these enzymes in each compartment or organelles determines the function of such organelle, the mitochondria contains dehydrogenases, cytochromes, and other enzymes which enables them perform their role of energy generation via the electron transport chain, the cytosol and the cell nucleus also possess specific enzymes which catalyzes their specialized reactions, this specificity of enzymes to different organelles allows for compartmentation of chemical reactions in the body, such that each reaction is specific to each part of the cell, the union of cells forms tissues and continued build up of cells forms the different systems of our body, thus this compartmentation also extends to our body systems in general.

As a result, each body system is specific for their reactions, this is due to the presence of some enzymes which functions optimally in these areas or in reactions taking place at such areas, these enzymes do not function properly/at all in other reactions. Thus we have gastric enzymes, enzymes of the pancreas, enzymes of the liver and numerous others as regards the nature if the organ/system.

You might have heard about proteases and alpha amylase which are the most popular biochemical catalysts, this is due to their availability and cheap means of obtaining them in the laboratory.
You might have also heard about the hydrolytic enzymes (hydrolases which comprises most of our digestive enzymes, even as a non-health person, because they are more pronounced in our nutritional activities.
But these enzymes are not only limited to breaking down of proteins (proteases), lipids mobilization (lipases) and carbohydrates catabolism (carboxidases), though, many other enzymes are also anabolic.

But here is one enzyme that involves in a wide range of biochemical reactions —the Cytochrome P450. Cytochrome P450 belongs to a larger class of biocatalysts known as CYTOCHROMES. Cytochromes are hemoproteins, containing iron porphyrin groups and are involved in several reactions, they are important components of the electron transport chain where their iron undergo reduction and oxidation to cycle iron between ferrous and ferric oxidation states, they catalyze the complex IV of the electron transport chain and transfers electron to oxygen, thereby reducing it and forming water. 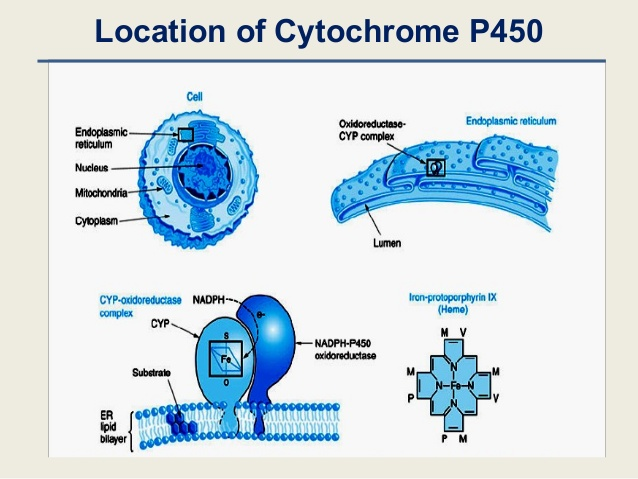 Cytochrome P450 is however not involved in the electron transport chain but it involves in the catalysis of many biologically essential reactions, they are named P450 because when reduced chemically and exposed to carbon dioxide, they showed a prominent peak at a wavelength of 450nm, thus the ‘p’ stands for ‘peak’ and the 450 an 450nm, the full name therefore is ‘Cytochrome peak 450’. Awesome as that sounds, but this comes off as no surprise as the enzyme is an awesome one too.

Cytochrome P450 is a very large family of enzymes containing over 130 isoforms, these isoforms catalyze different stages of the same or different reactions. They are named according to family, subfamily, and individuals, CYP is used to denote cytochrome P450 generally; Arabic number denotes a family, and an alphabet placed after the Arabic number to show that the isoforms is from a specific subfamily and another Arabic numeral after this alphabet denotes an individual from a subfamily, such that CYP5X3 denotes Cytochrome P450 of the ‘5 family’, ‘X subfamily’ and is the 3rd isoforms of this subfamily (this is just an example). Image credit: FDA
Cytochrome P450 are found in many parts of the cell and are not limited to a specific human organ compared to other enzymes / biocatalysts, they are found in the brain, gonads, adipose tissue, kidney and even in micro organisms such as bacteria. In these areas and organisms, they catalyze two major biochemical reactions which I will describe below.

Pregnelonone and progesterone can also be used to synthesize sex hormones in the gonads, this process is also catalyzed by Cytochrome P450. In adipose tissue, they are also vital in the synthesis of thromboxanes. Image credit: Omics
Xenobiotics are foreign chemicals introduced into the body system, this may be from the breakdown of some endogenous substance in the body such as the blood, or foreign substances such as drugs, pollutants and some chemical accompanying the food we take insecticide are also Xenobiotics.

The metabolism of a very high percentage of these chemicals are major responsibility of the Cytochrome P450 located in the liver, these enzymes catalyzes various reactions such as the removal of halogens and Sulphur from these chemicals and majorly gesticulation which activates these chemicals in preparation for conjugation or methylation, which renders the drugs (which are steroids) soluble and are then able to be excreted in urine or faces, this process enables the body to escape the toxicity of these chemicals.

Cytochrome P450 in bacteria performs a similar job of electron transfer as it does in humans. This is the bases of most of its actions.

Our body takes care of itself in many different ways, many very lethal reactions are taken care of by the body system, not only are Cytochrome P450 useful in the stated reactions, but they are also involved in other actions such as breakdown of potential carcinogens such as those from insecticides, Cytochrome P450 is produced genetically by numerous genes in the human body and also in other mammals such as dogs, they are however reduced in aquatic animals, this suggests their occurrence in response to increased toxicity. Their role in the metabolism of Xenobiotics also exposes the harmful effects other these toxins to human liver and suggests reduced intake of foods with preservatives, drugs and also reduced use of biocidal chemicals.

Correct me if I'm wrong, but the polygenetic nature of P450 is one of the reasons so many pharmacological agents have such variability in the population!

So much correct buddy. Thanks for stopping by