If you missed the first installment of my story - here is the link to it:
A Noobs Guide to Blockchain, Bitcoin, and Cryptocurrency - My Story Part 1

So, to catch you up. I'd turnd $1000 into $3600 in ten days and I had a serious case of crypto-fever. I was cashed out except for about $450 which I'd put into a couple of alt-coins that I thought might go straight to the moon. My bank was offering me a $10,000 loan at 6% for the holidays and I was having a hard time not just leaping off the cliff. So, that's where I was...standing on the edge of the abyss as the cryptocurrency markets went skyward at an amazing rate of speed.

First of all - let's dive into what an altcoin is. At first - when there was only Bitcoin - an altcoin was any coin that wasn't bitcoin but over a couple of years Litecoin and Ethereum were too successful and too mainstream to be considered alts any longer - at that point - especially when the main U.S. Exchange, Coinbase was trading all three of them - anything else was an alt.

There are really three kinds of altcoins - coins built on the bitcoin blockchain - like litecoin. I may be technically off on this, but this category includes forks like Bitcoin Cash and Bitcoin Gold.

Ethereum based tokens operate on the Ethereum network and are more properly called tokens.

Then there are the coins that have their own blockchains which are independent of both. Please correct me on this if I'm off, I'm still only a month into this - so I am bound to have misunderstandings in what I have learned.

Within those three categories there are privacy coins, function coins, and exchange coins. Privacy coins like Monero and Dash are built to hide the identity of the user - something which bitcoin is known for but actually doesn't do. Coins like Verge give you the option of private or public.

I'd put my $450 into a couple of coins - Verge (XVG) which had a lot of hype around it for it's public/private function which was forthcoming and was super cheap - just a few cents. I also bought Tron (TRX) because it was super cheap, I like the movie, and there was a lot of excitement on Twitter about it and how it was trying to create a blockchain based entertainment network. I spent about $50 total on those two coins and didn't really expect much.

The bulk of my $300 in Ethereum went towards two very different coins: Ripple (XRP) which was trying to become the big bankers coin. The people I had come to respect in my twitter feed hated Ripple, said it wasn't a cryptocurrency at all and said it was really a play to make the founders rich and give blockchain to the financial institutions that currently control all the wealth of the world. That sounded like a way to make some money to me.

Cardano (ADA) was the coin that I was putting my heart into. After pouring over the website, watching videos from the founders, researching what they were trying to do, and looking at the team behind it - I saw the possibility that Cardano might become the heir to Ethereum and had the possibility to supplant Bitcoin and Litecoin as well. So there was my thinking and my investment of the 'house money' I still had in the game. And there I was with the decision about whether to reinvest my winnings (because let's face it, this is gambling when you know as little as I do) and whether to take the totally stupid move of taking out a $10k loan so I could gamble even more.

You should know this about me - I'm lucky and I like to gamble - even though sometimes I lose. I once stuck my last $50 in a slotmachine and won $1000 - then the next day I came back to the same slot machine and won $1200 more on another $50. Then I bought a ticket to China and put all my belongings in my friends basement while I explored Southeast Asia for four months. But that's another story...

So, of coure I took the loan, but I have a family to worry about now and as a tour guide, I don't make tons of money and Hawaii is expensive - so I decided to use the money for multiple bets. I put $3400 in my regular bank account to cover an extra two months of rent and utilities. I put $6600 in my investing account. With the $3600 I had pulled from my initial crypto adventure that gave me $10k to invest (I used the other $200 to pay off my credit card use where I had gone over before). Now was the fun part - but of course there was still FUD and FOMO because the markets were moving upwards so incredibly fast.

I had a trip to Japan scheduled for Dec 18-22. I regretted selling my LTC while they were still going up - so I bought three more for more than I'd sold my six for. I bought Ethereum at $700. I bought about a tenth of a bitcoin at damn near $16k. That was $3000 and I decided it was enough for the moment. The other thing I'd decided was to split the $10k and put $5000 of it into the stock market because it seemed like missing the melt-up might be a bigger mistake than missing the crypto melt up. I used the Robinhood app because it offers zero trading fees. I bought mostly tech stocks with about a third going into crypto based companies like Overstock and the newly renamed Long Island Iced Tea (Now Long Island Block Chain) as well as Riot Blockchain and a fairly obscure packaging company called Document Security Systems. I helt the other $2000 back so I could buy on the dips when a correction hit...I knew it would hit, but of course, I didn't know it would hit like it did.

A crazy series of events conspired to create a panic on December 22nd. Charlie Lee sold all of his Litecoin creating FUD. Coinbase added Bitcoin Cash to their exchange adding more FUD. A non-stop assault of news programs created more and more fear uncertainty and doubt. All the cryptocurrencies crashed. All the crypto stocks crashed. All the noobs sold. I didn't sell though - I HODL'd. I held on for dear life. On the 23rd, there was a minor recovery but the FUD was hunting wabbits on a big scale. Regulators all over the world were scrambling to get control, to get citizens to stop taking out loans, mortgaging their houses, or using their savings to invest in crypto. It was pulling money from the stock markets, taking money from the banks, and taking away the power of big governments - still on a very small scale, but on a large enough scale to be alarming to the economic powers. 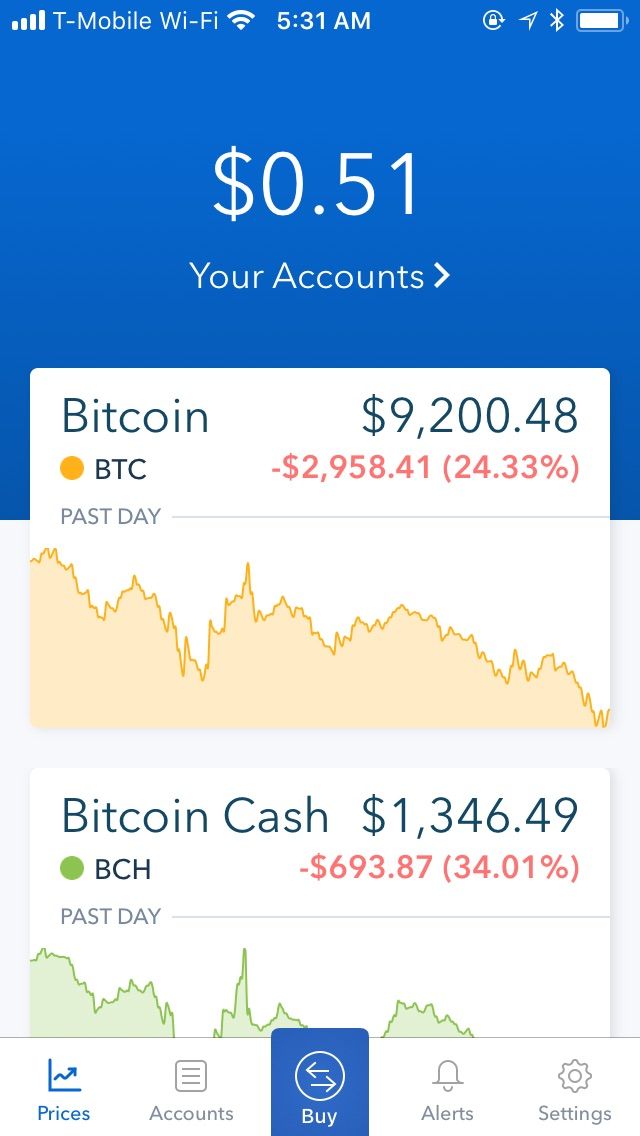 Since the start of the year - I've invested the other $2k in a couple of altcoins I really really like. Stellar, more Cardano, and more Litecoin. The crypto-bloodbath on January 17th created a nice buying opportunity so I was able to buy a little more Ethereum and Litecoin at much better prices than when I jumped back in at the highs.

The past ten days or so have been interesting, but for now, I'm as invested as I can be and as invested as I've ever been. My stock portfolio is doing well with Amazon and Facebook leading the way and bringing $400 profit in so far. I managed to sell most of the crypto stocks for modest gains before they tanked on the bloodbath news. So, my $5000 is now $5400 there. I bought a share of Starbucks yesterday when the CEO mentioned a trusted cryptocurrency is coming 'Starbucks' to me it sounds like Stellar. I hold Facebook because I think that if Mark Zuckerburg is serious about exploring cryptocurrency and brings one onto his platform - there are instantly 3 billion users. Robinhood is now moving into fee-free crypto trading and they've included Stellar and Litecoine (but not Cardano, dammit). Stellar also has some ultra serious board members. It was hard not to cash in everything and go all in on it - but it's best to have some diversification. That's at least one lesson I learned in my brief stint as a stockbroker back in 2003. The other was to sell if you lose 8% at any time - you can always buy it back, but if it keeps crashing you won't have the chance to sell again for an indefinite amount of time. It's hard for me to HODL with crypto because of that rule - my Litecoin are weighing pretty heavy right now.

I'm still up about $400 in my cryptocurrency portfolio - but it's come a long way down from those heady days in early December before the pre-Christmas crash.

And that's where I sit right now. My crypto and my stock protfolios are each sitting about 8% over my investment - which is pretty good return for a month of studying. Of course, when a market goes up- everyone is a genius - but when things are in the toilet - the genius is the one keeping his mouth shut and making money.

I'm ready to be that guy - but keeping my mouth shut might be the hard part. Captain Vapoor (that's me) publishes some compelling and sometimes downright weird shit. If you dig it - please
Follow me and Re-STEEM and comment so we can get to know each other!
In addition the following may be helpful to both of us:

Robinhood Crypto Trading Platform
If you want to buy or sell cryptocurrency you will need a couple of accounts:
Binance: https://www.binance.com/?ref=13319173 (I get a little bit from your transaction fees if you use this link - thanks)
Coinbase: https://www.coinbase.com/join/52d742c6c60a61f2a6000033 (Use this link and we both get $10 in BTC)

And for trading stocks on your iPhone (and soon Crypto):
RobinHood: https://share.robinhood.com/christd2392 (use this link and we both get a free stock like Ford or Apple)