Here I am back with part #2 of the St. Paul shipwreck if you read this posts for the first time here is a quick recap. I am from Croatia and I am an archaeologist who is currently working as a tourist guide in Dalmatia. I have a few posts on Steemit you should check them out if you are interested in Croatia and the Mediterranean. One of my series is called Follow the money explore the country the other one Dalmatia off the beaten path is about me exploring parts of Dalmatia that are off the beaten track.

The shipwreck I am writing about here lies on the seafloor near Mljet island in the south of Dalmatia. The ship dates back to the 16th century and was a Venetian merchant ship. The trading vessel was caught in a storm and ran aground in the shallows near Mljet island. The first part is an introduction so swing by and check it out to learn more about the shipwreck. In the last post, I showed what artifacts the archaeologists found so far at the bottom of the sea. In this post, we will see fascinating and forgotten artifacts from a 16th-century merchant ship. Among numerous finds, a few were of a particular interest to the scientists. The items were finally recognized as the ships galley ware. On a ship or boat, the kitchen is called the galley. You might think what is so interesting about kitchenware well the archeologist did not know at first what the use was for most of the metal vessels. Cover of the book by Bartolomeo Scappi. Image source

The specific use of each kitchen item was deciphered with the help of a cookbook written during the 16th century. The author of this cookbook was Bartolomeo Scappi maybe the first celebrity chef in Europe and he wrote Opera dell'arte del cucinare filled with more than 1000 recipes from the Renaissance. He also describes in detail cooking techniques and tools like dinnerware, plates, pots, pans, and kitchen utensils.

Among the kitchen items, dicoverd was a bronze kettle, two frying pans, and a vessel to keep food warm like a Bain-marie. Some of you may not know what a Bain-marie is, I will try to explain. It is a two-part vessel to keep food warm in restaurants or caterings in one piece you put water which is heated with burners in the second piece goes the food which is kept warm with the heat from the water and a lid. 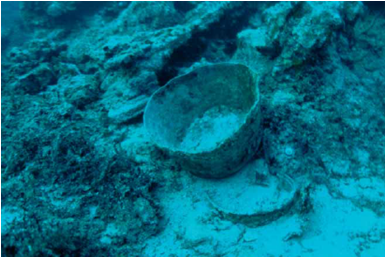 Bronze kettle on the seafloor and the kettle cleaned.

The bronze kettle is made out of two pieces of bronze sheet connected together with rivets and it is missing the handle. The inside is coated with a thin layer of tin and the entire kettle is hammered to shape. It was meant for cooking over an open fire it has 27 cm in height and is about 50 cm wide and can hold around 20 liters of liquid.

The next two artifacts found in the wreck were two frying pans, nothing special you might say and the first one looks just like the one you have at home. They found it near the kettle, the frying pan is 25 cm wide with 5 cm high side walls. The pan had a wooden handle and was made out of the same material as the kettle. The second one was an enigma for the archeologist and they had no clue at first what the metal object was because of its strange shape. The round piece of metal had 7 spherical dents in it and at first, they thought it was a stand for cannon balls. Here came the book by Bartolomeo Scappi in to clarify that in fact, it was a frying pan for eggs and the pan even had a name Padela fare oui frittolatte. It is described in the book as a two-piece pan and in the wreck just the upper piece was found. 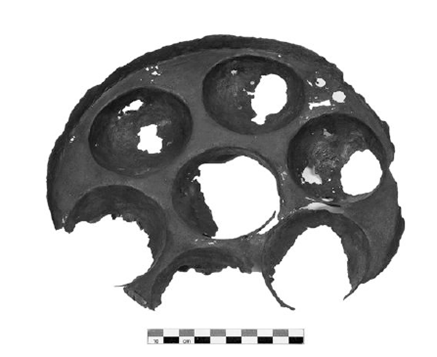 On the left part of the pan found on the right the drawing from Scappis book.

The one piece of equipment that was also fascinating to me was the food warmer similar to the modern ones we use today. The 16th-century serving dish is made out of three pieces the lid, bowl, and the midpiece to separate the water from the food. Archaeologists only found the bowl decorated with a ship's rope on the midsection. Also, this artifact was described in detail in Bartolomeo Scappis book. A few of few of those were found on a number of shipwrecks in the Adriatic. 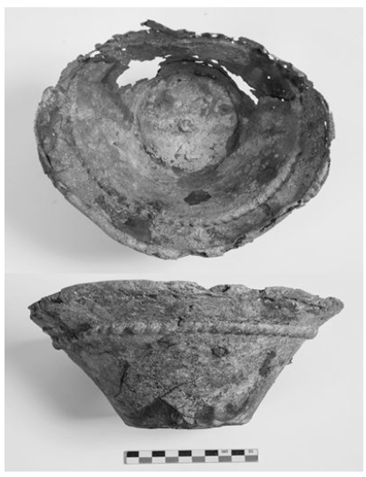 Food warmer found and the description in the book by B. Scappi.

The shipwreck and the cooperation between Croatian and Italian archaeologists gave great results in analyzing the life on board of a Mediterranean trading ship. The results were a step forward and gave the scientists answers on how the ship's galley functioned. Which if you think like I am it is maybe the most important part of the ship, a crew in hunger does not work well everyone knows that. This will be all for part #2 and in the next post, I will show you the cargo from the eastern Mediterranean meant of northern Italy.

I Pieced up the posts because I think it would be too big just for one post, to keep it fresh and interesting it will be a series.

Let me know what you think in the comments below.

All of the photos were taken from the book Sveti Pavao Shipwreck: A 16th Century Venetian Merchantman from Mljet

If you have any questions please let me know in the comments below and don't forget to resteem :)

Good luck to all of you untill next time @zija2022

Very nice finding! Amazing post, really love how you added history with it. Hopefully I'll be able to go dive deeper and explore the sea a lot more than just in our tiny sea. :) Thanks for sharing, definitely earns a resteem and have a great day.

Thank you I try to spice it up not just rewrite boring facts :) I hvala na lipim ričima pozdrav iz Dalmacije :)

Seeing a complete and utter different side to Archaeology. Makes sense a lot of the land that was is now sea.

Yes it is true some even calculate the sea level goes up 1 centimeter every 100 years.

HEHEHE maybe I have a few other post in order But I may take you up on it :)

Great post. It's funny how we all like soft egg yolks! :D So they invented and used pans for eggs even in 16th century. And sometimes we think that everything was invented in 20th century :)

They were smarter than we think back then.

Yeah, you as an archaeologists knows this the best. For an example, I was so fascinated by the comparison of medicine tools used today and the ones from Ancient Rome. Many "hand tools" didn't change at all in all 2000 years.

I must admit i have a bit fear of diving. But now when I am traveling I should do the padi course. And again there is another problem I like doing photography so I need camera case. :) well if I find a treasure like this then no problem. Or if steemit surprises me. Super post. Thank you for sharing

Thank you I try to keep it fresh :)

I love any kind of archaeology but underwater is even more interesting. I have no idea how they decide what a piece is when there is so little left of it. Thanks for this.

Archaeologist use comparison with similar artifacts which lead to classification and that helps dating :)

@zija2022, I think it is fascinating that a cookbook was used to help us understand the artifacts discovered, and that nobody could figure out the egg pan without the cookbook illustration to help shed light on it. Just one example of how we can misinterpret the things of the past when we don't have quite enough information. I wonder how many other times this has been done over the course of the last few hundred years? Probably more times than we will ever know.

Do you dive for your archaeological work, too? I really enjoyed reading this article, and am going to check out part 1 next.

@mitneb thanks for the help glad to see you like my post. It is a really old cookbook, to be honest :) and yes archaeology is a science evolving with new knowledge. For sure ideas and interpretation changes with new discoveries, archeologist try to piece together the past of humans with help of artifacts. One must bear in mind that the past is long gone and forgotten so in some cases it is difficult to elaborate. And yes a lot has been misinterpreted.

I do not dive, I am more active on land, field archaeology is more my thing :D

Hey @zija2022, I am a curator from the Whaleshares Curation Team. I have selected your post to be presented in a live curation discussion on Monday 5th March. Your post will be awarded with a 100 Whaleshares vote on the night. I do hope you can come along and spectate. The event will be held in The Curation Lounge on the Whaleshares server. Here's a link which explains things: https://steemit.com/steemit/@nikflossus/the-whaleshares-curation-show-episode-16-23-59gmt-or-6-59est-tonight

@anomadsoul Thank you for choosing my post, I can't thank you enough. It is a great honor, I am sorry I could not participate in the live chat I was waste asleep at the time. :-)