The Lab Chronicles - Day 1, The Piranhas are Coming

Today I started continuing my work on a project that may result in new filters to rid our water of estrogenic compounds. Today also marks the beginning of a new series of posts. I will try to report every day about work that I have done in the lab. With this I am hoping to get people a better understanding of what being a laboratory scientist looks like.

The science of today, is the technology of tomorrow.
Edward Teller

Working in a laboratory encompasses a lot of cool things. However, the first steps of starting a new project are usually pretty unsensational. I am currently working in surface chemistry, which is a very precise branch of chemistry. The goal of my work is to fix an organic compound known as MUAM onto gold substrates. The gold substrates are 1 inch by 1 inch large glass slides, covered with a few nanometers of gold. They are very fragile and need to be handled with a lot of care. Another problem is that any organic compound can easily adhere to the gold surfaces, even organic compounds found in the air. In order to prevent contamination, the first task I had to perform was to clean lots of glassware. After rinsing all the glassware I needed with superfiltered water (you know, water usually conducts electricity? This water is filtered so much that it acts as a resistor, alas does not conduct electricity at all!), I submerged it in a Helmanex bath. Helmanex is a solution that is made for cleaning glassware and other materials, and is something you definitely do not want to have on your hands. All of this I have done yesterday. Today, I had to take the glassware I was going to use from the Helmanex solution, and rinse it again with superfiltered water.

I also had to clean the metalware I was going to use, which included a pair of tweezers. The tweezers were corroded, and in order to clean them, I submerged them in a solution of 6M Nitric Acid (very concentrated, very corrosive). 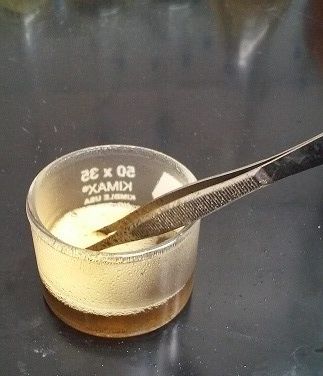 The tweezers were very dirty (lots of rust), and the acid took really good care of removing the rust. Turns out, these tweezers were almost entirely rust. Now lets move on to some cooler things.

What Piranhas are doing in my Lab 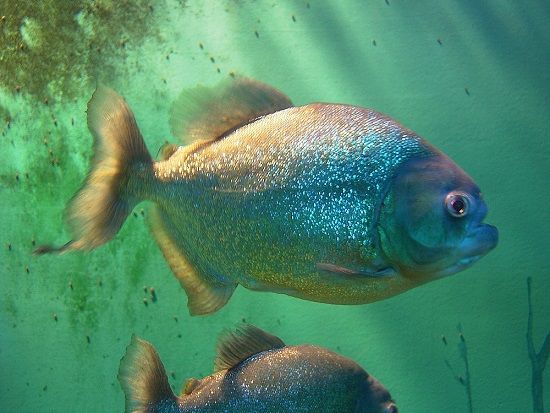 Piranha solution is a very nasty mix of sulfuric acid and hydrogen peroxide. Sulfuric acid by itself is very vicious, but mixed with hydrogen peroxide (commonly found in hair bleach), you get something really dangerous. The piranha solution I made was 70% sulfuric acid and 30% hydrogen peroxide. You can measure the needed amounts out very easily using a measuring cylinder, yet, never just dump the two components together. When mixed incorrectly, meaning too fast, piranha solution can bubble over the container you use (potentially causing harm by corosion) or explode, with a pressure wave and glass splinters. You do not want to have an acid bomb explode right next to you. I was actually very proud that my supervisor allowed me to prepare the piranha solution (students are usually not allowed to). Once that was set up, I practiced cleaning the gold substrates by using a simple and cheap glass cover slip. I was wearing thick rubber gloves and very pointy tweezers, which makes handling of the slips very difficult.
A friend of mine has just recently tried to perform the same project, but after breaking 3 gold substrates (each little slide is 50 Dollar), our supervisor decided to cancel this project for a few weeks. However, I managed it well and decided to clean the gold substrates. They were immersed into piranha solution for 3 minutes, and then placed into superfiltered water until further use. MUAM is also known as 11-Amino-1-undecanethiol. It has two reactive groups at both of its ends. The thiol (sulfur hydrogen group), binds to the gold in a way we do not know yet. The amino group is later used for adding another substance. I will talk about this later. The MUAM is supposed to cover the entire gold surface. 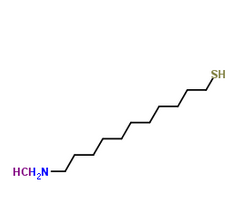 To fix MUAM to the gold surface, I prepared a 0.1 mili molar solution of MUAM in ethanol (drinking alcohol). To make 50 mililiter of MUAM I weighed out 0.0013 grams of MUAM using an analytical balance. The balance is very sensitive, and weight measurements are influenced by how far away from the balance you stand, airstreams, and water in the air adhering to your sample.
When the solution was set up, I had to move some of the gold substrates into the solution relatively quickly. Once the substrates were submerged, I sealed the containers with something called parafilm, which is a stretchy foil. I then covered the container with aluminum foil, labelled it as my samples and placed them in a fridge. The same happened to the blank substrates. Blank and samples are the same, only that the blanks are immersed in superfiltered water, instead of MUAM.
This is all the work I have done today. I was working from 9am until 3pm, with a 2 hour lunch break. Tomorrow I will set up equipment to perform Infra Red measurements, that will help me to demonstrate that MUAM formed a layer on the gold surface.

Thank you very much for reading my post! I really enjoy my work in the laboratory, however, I do understand that this is not for everyone.
If you liked this post, please upvote it and check our my channel. I am trying to give you a look behind the curtains.

I used to work in a Pharmaceutical lab for two years.. Your blog took me right back into my memories, being in those rooms full of high tech gadgetry and instrumentation for analysis of just about everything..

I tried to show people what it was like behind the glass window of a lab, until the lab managers snapped for using phones. Oh well.

Hey @biffybirdcam! No worries, that is not an issue in my lab. I am virtually working by myself and my supervisor just comes by to see if I have questions! Hope you have a good day. Cheers!

Seems you had a busy day in the laboratory. And you seem to know a great deal what you are about. Impressive. I'll keep an eye on your blog to see how it all unfolds... not like I know a thing about acids or chemicals :-)

And by the way, don't the fishes need the estrogen to reproduce? Why would we want to rid our waters of the compounds? Again, remember I am a dumbass when it comes to issues of science. I hope I didn't pull a very stupid one. hahahahaha

Hey @misterakpan! Thank you very much for the kind words! I am trying to write as comprehensible as possible, but this being my background, I do not know how easy to understand everything actually is haha!
Well, the problem with estrogen is that it is too much and that it interferes with the fishes reproduction and that it can affect us humans also. There are studies (eg one at Lund University) where they have found that estrogen in water actually makes male fish more female and causes deformed bodies and fins.
I greatly appreciate your interest! And no one is a dumbass as long as they stay curious. Thanks again and Cheers!

Thank you very much @steem-sahal. Cheers!

Hello! I am Akpan, and I work with a renowned curation guild in this community. Your post got featured in my weekly Curator Remark Anthology and I thought you might want to check out why I picked your post among the hundreds I go through on an average week.

If you appreciate my work, you may want to resteem it. Yeah, I am human, not a bot ;-)

This is an AWESOME post! This is the first up close study I have seen conducted on the impacts on estrogen on fish. I have heard others on amphibians. Also I would assume your lab has a desiccator as well as a scale with 4 glass sides? If by infrared measurements do you mean Infrared spectroscopy?

Thank you very much @csusbgeochem1! Actually I am not really interested in the impact of estrogen on fish haha! This is about designing a SAM that can be attached to a gold sufrace and carry a modified enzyme to polymerize estrogen that is found in water in order to cause it to precipitate out. In short, I am hopefully creating a new type of water filters, that may be used on an industrial scale in the future. Yes my lab has a desiccator, but I do not need that because I clean the surface of the gold substrates and they then stay in solution most of the time. Especially after the MUAM is attached to the surface, the whole thing is really stable (it can stay functional in ethanol for months).
And yes, I am using attenuated total internal reflection infrared spectroscopy as well as external reflection. We will also be using x-ray photoelectron emission, but since we need to perform those experiments at another university, we have to use ATR and external reflection to veryify that a SAM is present first (just so we do not waste anybodys time and resources).
Seriously though, I appreciate your interest and questions! I would have upvoted your post twice but that is not possible haha. CHeers!

Thank you for the reply! this filter your designing sounds like a really great idea. The articles i read concerning this subject stated it was mostly due to humans. I will be following along more often.

I would believe that is possible! However I read that "the pill" is not a major contributor (I referenced an article somewhere stating this). So I am assuming that the main source is unfiltered industrial wastewater and agriculture. Thank you for actually caring about my research! Cheers!

Congratulations @lesshorrible, this post is the third most rewarded post (based on pending payouts) in the last 12 hours written by a User account holder (accounts that hold between 0.1 and 1.0 Mega Vests). The total number of posts by User account holders during this period was 3664 and the total pending payments to posts in this category was $10074.69. To see the full list of highest paid posts across all accounts categories, click here.

Well done! This post has received a 7.14 % upvote from @litasio thanks to: @steemstem-bot. Whoop!

The @OriginalWorks bot has determined this post by @lesshorrible to be original material and upvoted it!


Please note that this is a BETA version. Feel free to leave a reply if you feel this is an error to help improve accuracy.
$0.00
Reply
[-]
drotto (48) 4 years ago

This post has received a 0.10 % upvote from @drotto thanks to: @steemstem-bot.