Directed Energy Weapons (DEWs) are one of the most anticipated technologies in modern military science. Guided electromagnetic energy has proved to be effective in destruction from a long distance. They are designed to cause catastrophic damage to the target by delivering enormous amount of energy within a very short period. A quick overview of DEW technology is discussed in First Chapter. Let’s dig in ‘Particle Beam Weapon’ technology today. The particle beam weapon (PBW) is the form of DEW which cause devastation by interrupting the atomic structure. Energy of the particles are increased by speeding them with the help of electric fields. The speed of the high energy particles can reach near about the speed of light. The particles deliver a small amount of its kinetic energy to the target material. This change of energy cause the disruption in atomic structure. The form of propagated energy differs PBW from other DEWs.

Particle beam weapons destroys the target by imposing energy of the beams to the target material. When the beams strike the atoms of the target material, the energy is passed to the atoms of the target instantly. We can compare this strike with the reaction of billiard ball’s group broken apart by the strike from cue ball. This results in sudden increase of temperature to a very high level, which causing the explosion of the target material. This is why the PBWs are often compared with the lightning bolts. The beams are composed of electron, proton or Hydrogen atoms. Electron and protons both serves at charged particle weapons while Hydrogen atoms are used in space operation. The Hydrogen atoms don’t necessarily collide with the air molecules due to its neutral behavior. Figure 1 shows a simplified schematic of particle beam.

The power of a PBW is measured in watts and the energy in the beam is measured in Electron-volts (eV). One eV is denoted by the kinetic energy of an electron which is excited by one volt. An effective PBW generates near about 30 MeV which is consists of particles each with energy of 30 million Electron-volts. A particle beam weapon having 1 GeV of energy is capable of seriously damaging a target at 1000 km range in space.

Particle beam weapons can be broadly categorized in two forms,

Electrons or protons are excited up to the desired energy level using electromagnetic field. These weapons are mainly used inside the Earth’s atmosphere. Particle accelerators generate high energy particle beams having high intensity. In general, a charged PBW can destroy a target at 1000 km using energy of about 1 GeV and the flow of the particle would need to be continuous about 0.1 ms to disrupt the atomic structure of the target. For precise target operation, air channel is made by heating the air. The beam can follow the target propagating through the channel without distraction. The most common use of charged PBW is to defend the ballistic missile. The defense system is installed in ground site having connection with radar system to track and disable incoming missiles.

Neutral atomic particles like Hydrogen atoms are used in this type of PBW. Generally, Hydrogen atoms are subjected to massive electrical charge. Negative ions produced by this charge is accelerated by the electromagnetic field. High speed particle beam is produced from the stripped electrons. Neutral PBW can also estimate the damage done to the target. The impact of neutral beam causes characteristic emission from the target’s atomic structure. This emission can be used to determine the damage done by the beam. But to accurately propagate such high speed beams requires an enormous amount of energy. This amount is technically too large to be produced by the present day accelerators. Another drawback of this type of PBW is the strong effect of atmosphere. A neutral particle beam attenuates in a great extent while propagating through the air. State of the art technology implementation is expected to be done in near future to make neutral PBW more suitable and efficient in outer atmospheric usage.

Particle beam weapon technology involves several technological implementation from the electromagnetic effects to the radar and targeting mechanisms. The core parts of the PBW tech can be described as, 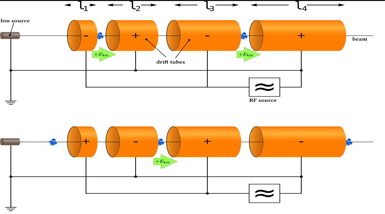 The linear accelerators use a long straight line while speeding up the particles. Focusing magnets are used to keep the accelerated particles in proper track. It is composed of a group of accelerating parts which continuously generate accelerating electric fields around the particles. This contentious process generates higher particle energy. Characteristics of different types of particle accelerator are shown in the table[Source] below,

The power source generates power in massive level to operate the accelerator. Mobility and variation of power level are the main characteristics for power source of PBWs. Advanced battery technology and turbo generators having superconducting mechanism are most preferable power sources.

PBW energy storage can be achieved in several process. The commonly used mechanisms are capacitor bank and energy storage in form of high energy explosive. Energy storage method depends on the PBW type and on the accelerator.

Power pulses are shaped by using pulse forming network. It is used to reshape the burst shots provided by the power source. 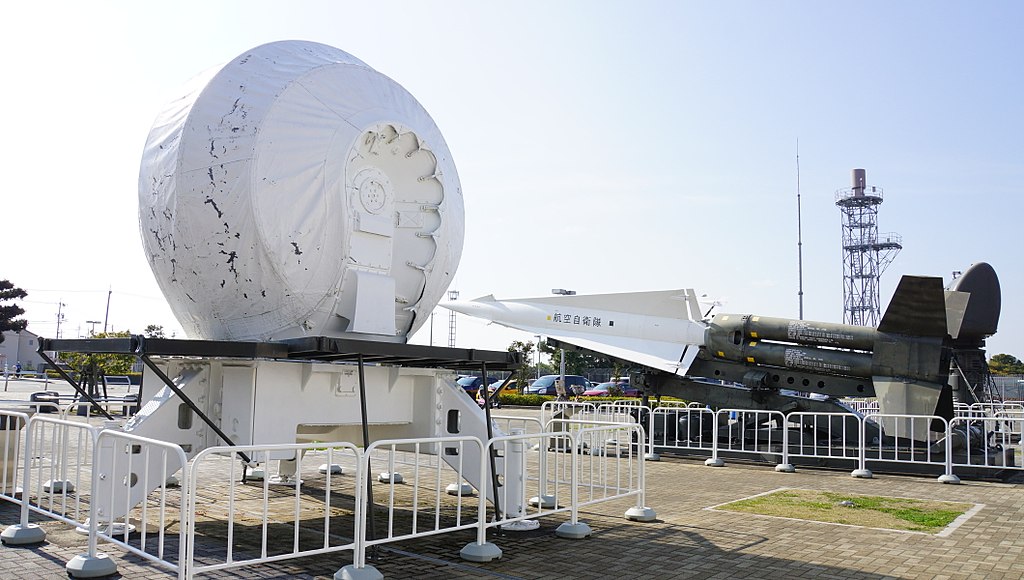 PBWs use the generalized target tracking and beam positioning mechanism. The process is more like the tracking system used in missiles and other directed energy weapons. The charged and neutral PBWs use different methods of tracking and positioning. This is because of the atmospheric behavior.

The basic operation of a particle beam weapon can be described in following sequence[Source] ,

Energy weapon prototype, credit: Pixabay license: CC0 1.0
The advantages of particle beam weapons are,
The limitations of PBW technology are,

Particle beam weapons are used in both lethal and non-lethal purposes. PBWs can be used to damage infrared and microwave sensors of the enemy weapons along with the massive destruction on target material. This type of weapons have better penetration which leads to greater damage to the target material. The all-weather operation capability gives PBW an operational lead over other forms of directed energy weapons. Additionally PBWs are capable of causing noteworthy damage to the target even when the main beam misses the target. A secondary radiation cone composed of alpha, beta and X ray particles are formed proportioned to the main beam which is capable of causing sufficient damage when the main beam couldn’t reach. The electromagnetic pulse (EMP) generated by the current pulse of the particle beam can also severely damage the enemy electronic equipment. As discussed in the first chapter, PBW is the least mature directed energy weapon technology. But it has the potential to be one of the most effective weapon technology in modern warfare.

The next article will cover detailed overview on 'Microwave Based Weapons'. The technical features, usability along with their limitation will be discussed thoroughly. Don't miss that out if you are curious about High Powered Microwave Weapons!

A much deserved thanks to @scienceangel for her cordial help in writing this article.

Congratulations @ied! You have completed some achievement on Steemit and have been rewarded with new badge(s) :