I Found and Hatched a Mushroom Egg

I found a mushroom egg.
Yes, that’s a thing! Finding of the egg:

It was growing in a grassy area in a hardwood forest. It really looked like someone left an egg in the middle of the forest, and that caught my eye.

At that point there were only a few possible options since I only know of three main types of mushrooms that start as an egg: Amanitas, Volvariellas, and Stinkhorns.

When I touched it, it felt soft, which narrowed my options to a Stinkhorn. Stinkhorn eggs are soft and if you cut them in half you can actually see the profile of the mature fruiting body, but most likely, you won't be able to see all the features needed to identify it down to the species name.
I really wanted to know what it was, so I took it home to hatch it.

For some species of mushrooms, you can actually take the egg off the ground and hatch it by keeping it in a moist environment, which in my case was a polypropylene container filled with wet debris and leaves and covered with plastic film.

First observation, the immature fruiting body (the "egg") was whitish colored and about 7 cm tall by 5 cm wide. 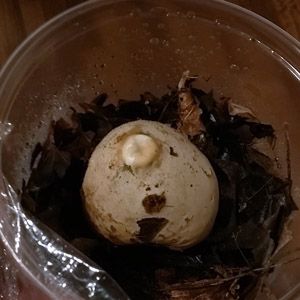 The egg didn’t change much during the next 24 hours. It got darker and softer, but I assumed it was rotting and I was not going to get it to hatch.

But the second night after I picked it, the top of the egg changed color and started to look like the ovomorphs from the movie Alien.

It seemed this egg was about to hatch!

When I woke up the next day, I went to take a picture and this is what I found. Now we can start with the identification game. 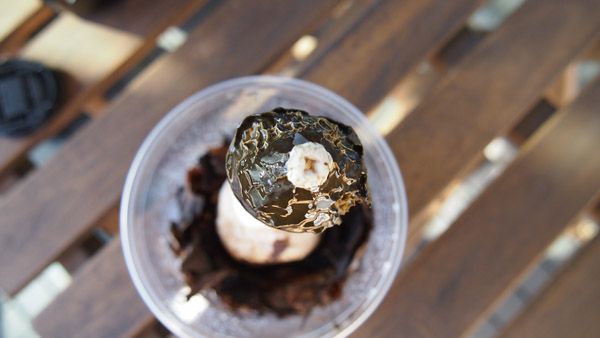 And now to the fun part. After a couple of hours, my balcony smelled like rotten meat, and it was full of flies. Big ones. And they were having a blast with the mushroom. 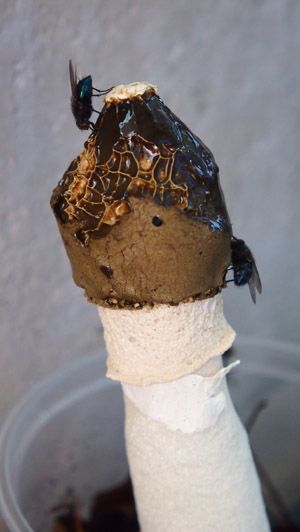 I kept watering the bad boy and the flies kept coming to my balcony until they ate all the slime, leaving a whitish surface underneath exposed.

Stinkhorns are amazing. These mushrooms have a peculiar and ingenious way of spreading their spores. The foul-smelling slime covering the cap attracts flies and other insects, who after landing on it believing it's some sort of dead animal, eat the spore-rich slime and disperse the spores.

My neighbours will be happy to see some Stinkhorns growing in their gardens in the future.

Finally, after checking all its features, it was clear that this was a Phallus duplicatus, aka the “Netted Stinkhorn” or "Skirted Stinkhorn".

Phallus duplicatus is a member of the Gasteromycetes (stomach fungi). Gasteromycetes are fungi in which the spore bearing structures (hymenium) are exposed after the spore mature, in contrast to Hymenomycetes, in which the hymenium is exposed before the spores mature (this group includes most mushrooms, polypores, and jelly fungi). There are two other classes of fungi, Urediniomycetes and Ustilaginomycetes, but they don't produce macroscopic fruiting bodies and they're not of interest for the purpose of this article.

Phallus duplicatus is one of my favorite mushroom finds. It's so strange-looking and beautiful, and when you find mature specimens, you can actually smell then before you find them. Isn't that cool?

Disclaimer: All images are OC

That’s it. I just wanted to share with you my latest find.
Let me know if the comments if you liked the article and follow me for more interesting mushroom content.

Proud member and supporter of the minnowsupportproject - brought to you by @aggroed, @ausbitbank, @teamsteem, and @canadian-coconut
Click the logo below to learn more

Interested in science, technology, engineering and mathematics? Then, please support @steemstem, a community-supported project aiming to increase the quality and the visibility of well-written, high-quality, STEM-related content. Just click the banner below created by @foundation to join the chat channel.

Very interesting and informative post. Cool mushroom! Have not seen a mushroom grow from an egg before.

So cool! I love this - it's like finding a freaky little chicken egg and incubating it into the worlds scariest chicken. You never do know which Phallus species is gonna pop out of those things I guess - I've been seeing vountless rubicundus around my place so I just assumed that would be this as well.

Thanks for this, had no idea some Mushroom grow from an egg. It look sort of alien and gross, like from a sci-fi alient planet.

This is so cool!! I never would have thought any sort of mushroom grew from an egg. You learn something new everyday, thanks for the post!

So cool! I have come across plenty of stinkhorns, but never an unopened egg for one. I once thought an animal had dies in the wall of my house. I went outdoors to make a plan for opening my wall. And I discovered a stinkhorn. The smell was coming through my windowless wall and all the insulation. They are powerful! What did you do with your stinkhorn when you were done? Fungi are fabulous! : )

Q: Why did the Mushroom get invited to all the parties?
A: 'Cuz he's a fungi!

Culturing an edible mushroom is profitable. However, an egg mushroom is not edible i think.

wow nice and looking good egg do you eat this egg or not?
pls tell me more little details about it

Never ever eat a mushroom egg...

Holy shite! This is the most fascinating post I have read on steemit! I learned something, and those pictures were so cool. I’d never known that mushroom eggs were a thing. So cool and weird.

Great article, loved it. Super cool idea on trying to hatch that out, I might have to experiment with that at some point. I learned a lot from this post (like the softness of the stinkhorn egg), thanks so much for doing this and sharing! Love the pictures too.

Resteemed to over 5400 followers and 100% upvoted. Thank you for using my service!

Plants are freaking amazing. Far more intelligent than a lot of 'superior' life forms, too.

That's amazing! Thanks for Sharing.

This is one of the best posts I have seen on Steemit so far! Thank you for sharing this experience with us! You made it feel like I found the egg. I particularly enjoyed the etymology portion. Resteeming and following! Glad dber recommended your content! Can't wait to see more! Steem On!

Congratulations @fabulousfungi! You have completed some achievement on Steemit and have been rewarded with new badge(s) :