Today I tried the two SteemitJam #4 "Start with nothing" entries.

The first entry that I tried was done by @smjn with what seems to be the unpronounceable SWnEWn.

The animated title screen with the letters moving is pretty neat. The letters go in disorder and come back to what's in the image below. I'm still not sure what the title means. 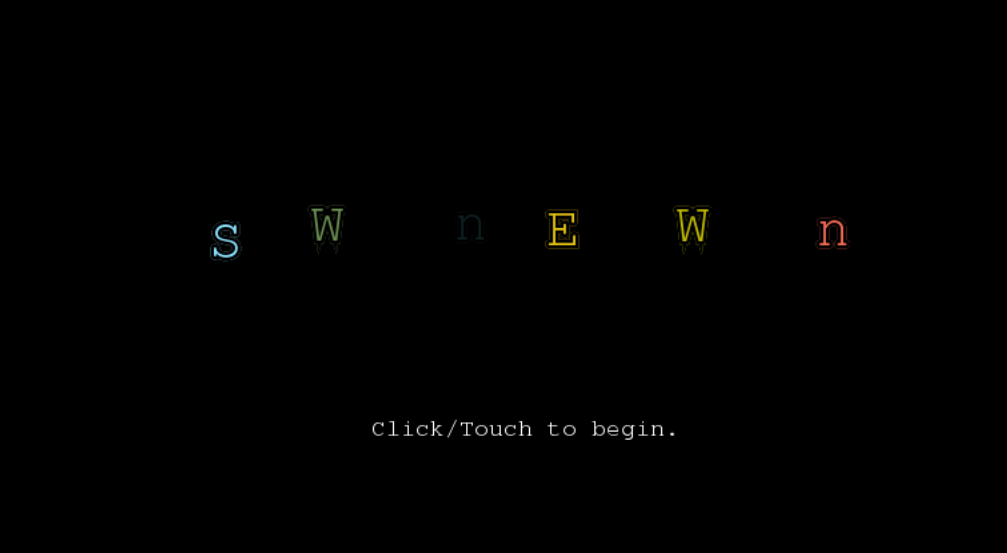 The game is very snake-like, but there's two key differences : You are not the snake and the snake is the enemy.

You must avoid the snake by collecting squares and powerups to amass the biggest score until you die by touching the snake. I really like the yellow powerup where the snake scatters, I'm interested on how that was programmed.

There's different powerups, even one allows you to kill the snake if you touch his head. But when you get that powerup, the snakes run away from you!

The death screen animation of the spinning square is nice and fits well with the art, but would probably trigger epileptic seizures. Unfortunately for me, I could not get a score that I'm satisfied with because either my RAM (8GB) blew off or my CPU usage was too high and I kept getting constant overruns... (My max score is around 900 something, but I'm sure I could do a lot more). I'm not sure, but it seems the resource usage is a bit high.

Other than that I was amused by the entry and I think it's very good. The concept of being able to kill the snake is great and I hope to see you in the next SteemitJam :)

Nothing the game by @kkcoder

In Nothing the game, you try to find words that have the same letters as the sentence : "You start with nothing".

You need to achieve one of these four goals :

You can achieve a goal by adding three objects that relate to the goal.

I think the use of an API in a game jam is a really original concept that allowed you to create something very different. It would have been even cooler to try and make the "goals" dynamic by fetching an image based on tags, so there would have been a great number of possibilities.

I was a bit confused at first on how to type words because I realized you could edit the original "You start with nothing" sentence.

Nevertheless, I liked the idea and I hope to see another submission in SteemitJam #5!

your work on #steemitjam is awesome 👍

Thanks for writeup! Sorry to hear you had performance issues. Any chance I can ask you to go to http://webglreport.com/ and take a screenshot of the WebGL 1 tab?

Thanks! The performance issue is because there is no webgl and it falls back to canvas. This will be slower and I have not thought about testing :) good thing you got this!