surpassinggoogle (76)in #steemit • 4 years ago (edited)

Dear Steemians, so would you wear something like this? Well, after some serious talk with @lagosnewyorker about blockchain in general and steem, they are finally getting onboard steemit! So if you live anywhere in Canada or USA and you like some new attire, it just got closer!

A bit about Me!

If you only saw the entire tired being saying these words, you will marvel at testimonies. Fire, fire, fire!

I am bringing in more fire on steemit! You need fire? I tell you and even my entire tire being still exudes loads of it.

My steem on-boarding continues and it is simply becoming my most interesting steemit endeavor because i finally get to add some more fire, to my already burning fire.

Imagine an entire tired being in the rubble with only one arm stretch, one pointed finger; still trying to poke the world from its outskirts with beautiful happy vibes: that's ME!

I am finally starting to bring in on steemit; fellow google surpassers; my community of people who have followed me all along and who have existed prior to steemit and these ones will add more fire to the fire-pot and we will generate just enough beauty-fire to adjust the world and make it into a places filled with more love, more good news, more testimonies.

You need fire. You need stubborn fire. Above all, life and the Giver of life Jehovah behind you. So here we go!

When you here your boys saying, "Terry, my long term goal, is to own a jet company", then i tell them "now we are talking!" That is what we are talking about! Now, you are talking! Hahaha, same apply to the girls on my team!

By "boys", i mean it in a power-way, so it constitutes boys and girls alike.

Come over partner! We simply add steem to the dream; Richard Branson, here we come!

"I want to own skyscrapers and give them out!" I am surpassing Google! Hahaha, anything wrong with these words?

We will gradually play these words out on the steem blockchain. I want my story to be a testimony of a boy, who was never afraid of giving!

So again, if you have dreams etc and you feel they aren't attainable and you are letting go of it and tiring out, come to me on Idea Factory and let's brainstorm a fixing for you, together! To own The LagosNewyorker Airlines, to run Jet services from Lagos to New York and i say; "Yes!"; for while they have been busy dreamrealizing that, i am working on eliminating the need for tourist visas for reputable citizens of developing nations wanting to visit developed nations. I created OurFactory.

So fellas, how far from your dream can you actually be, when you dream? In words of @surpassinggoogle; from pauperism to CEOism is as easy as converting full-blown poop into tiny fart trinklets! It is not that hard!

@lagosnewyorker left Lagos all the way to New York, "city of lights" on a cause; created a branch of our dream, became American citizen; created a team and a registered company and they now brings on more lights, to the streets of New York.

Hahaha, we used to brainstorm on how to eradicate visa issues for people from developing countries and in one of my dreamer's solution, i would say to @lagosnewyorker, "if you had your exact clone in USA, to effect your exact bidding, will still need a visa up to a 100 percent?"

Well, maybe 35 percent as majority know they will travel after all but for dreams = reality-sake, they feel they will need an enabling environment even now!

In any case, it all starts with the dream and now there is an enabling environment (steem), so are you continuing to dream. Will it be told, that you were here?

@lagosnewyorker is a registered company in New York and looks to resound the voice of the best talents from especially Nigeria to the celebrity public of USA.

Who doesn't know there are souley talents on the streets of Lagosia, shining in the heat of sun and @lagosnewyorker is bringing to the fore.

Speaking of dreams, the most recent talent in talks with @lagosnewyorker, created shoes that have been adorned by the feet of Virgin Atlantics Owner, Richard Branson! She hails from Nigeria and she is on instagram as HeseyDesigns!

So perhaps, The Lagos Newyorker Airlines is not that far-fetched afterall!

@lagosnewyorker is also the official promoter of Mrtorchfooties, who has appeared on Nigerian newspapers for making high-quality handmade footwears, like these featured below: How Hard Is It To Reach Out To Celebrities In USA

Not that hard for a dreamer, with vision, the right amount of vision, self-belief, experienced hustle, connection and quality.

Let sheer talent speak for itself. If your vision is a beauty and it is staunch, then why shake, the Kings will come knocking!

@lagosnewyorker team simply become human ADs for sheer African talent. First of all, there is market for LagosNewYorker in USA. It is still rare to see raw, homemade African products and that stirs very stunty attention.

He simply gets free samples from his clients in the African continents, which they love to give out freely and he plays them out in NewYork, using models on the runways. Well, that's for fashion!

And if its music? Hit the U.S DJs with new freshness!

The job is not in the connections. The job is in the quality of his talents!

@lagosnewyorker also gets a ton of leverage from success African stories from NewYork & Canada. For instance, these two young kids, The Dowe Twins, who already playing out their vision from childhood, by making bottled water readily available for kids.

Well, onboarding was ended up seamless. After a long conversation. They will also look into investing some fiat to start with!

Why dream with horizons, when the world is fast paced and there dreamers everywhere?

"If you are visionaire, then you have twin somewhere". @surpassinggoogle

Alas, another dreamer @dan made steem. Add steem to your own dream and solve the puzzle in another person's dream and this is world adjustment in a never-ending loop!

Perhaps, a huge issue with the world weren't issues, afterall? Perhaps, the issue has been: "very few sustained dreamers".

Ultimately, to dream; you just may find yourselves against all odds, against entire nations, against YOU. Remember, when i said you don't only need fire above; "Cos what you need is stubborn fire or fire fire fire": ginormous emphatic fire. @ned would say "a vision in a dream".

I have permission for all the images!

Everyone has something to offer!

Detailed with humour. You will do very well being a label manager because you canmarket successfully market even "the ugly ". Nice knowing you

Thanks. I have to pace things and create top notch entry for boys with vision! 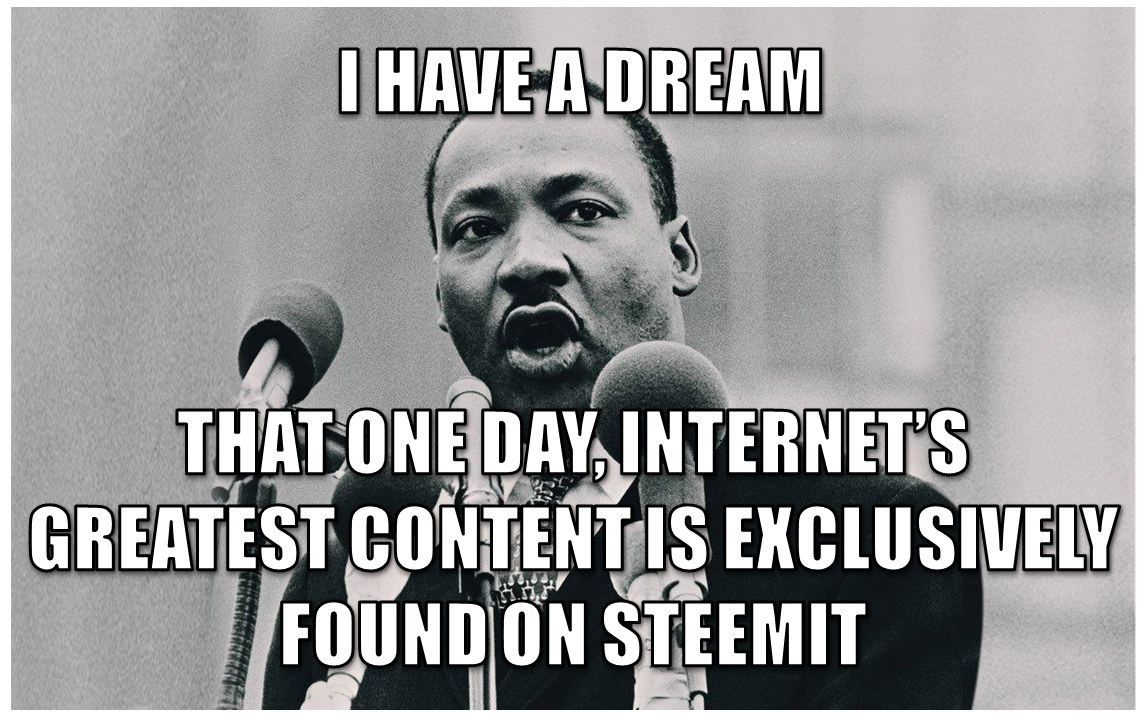 Nice, very nice, it is like we are aligned in terms of goals. No dream is too big or too small, the limitations we place on ourselves determine how far we will go, nice to see the lagosnewyorker here, more airlines to your reality, . @surpassinggoogle, could your username be a pointer to your dream?

Yep david. Big dreams! Hefty dreams too of my and my dad!

We can always talk in the chats as well!

No Dream Is too big or dreamer too small

I admire the way you are constantly surrounding yourself with like minds.

The problem some people have is their friends.While some fear failure, they often fear success too.

Subconsciously, they worry that they lose their friends, because they’ll envy their success and no longer want to socialize with them.

The solution to this is to surround yourself with like minds, I have lost some friends during my Steemit journey, most of them wanted me to lavish my earnings and I disagreed, i have also made awesome friends who think a lot like me.

That Agbada is sooo crisp and banging! 💪. @lagosnewyorker, you've got a new follower!

Congratulations @surpassinggoogle! You have completed some achievement on Steemit and have been rewarded with new badge(s) :

What you doing here is really really awesome. Good luck for the future.

kindly follow back as well and check out my blog