Steemit Data - The Most Popular and Lucrative Post Categories

Yesterday I created a personal Steemit database and brought in data from over 10,000 Steemit posts from the past 5 days. Today I'm going to share some of that data, specifically relating to the most popular and most lucrative category choices for your posts. Nothing too complicated, just summary data and some of the insights we can get from that.

The Most Common Categories 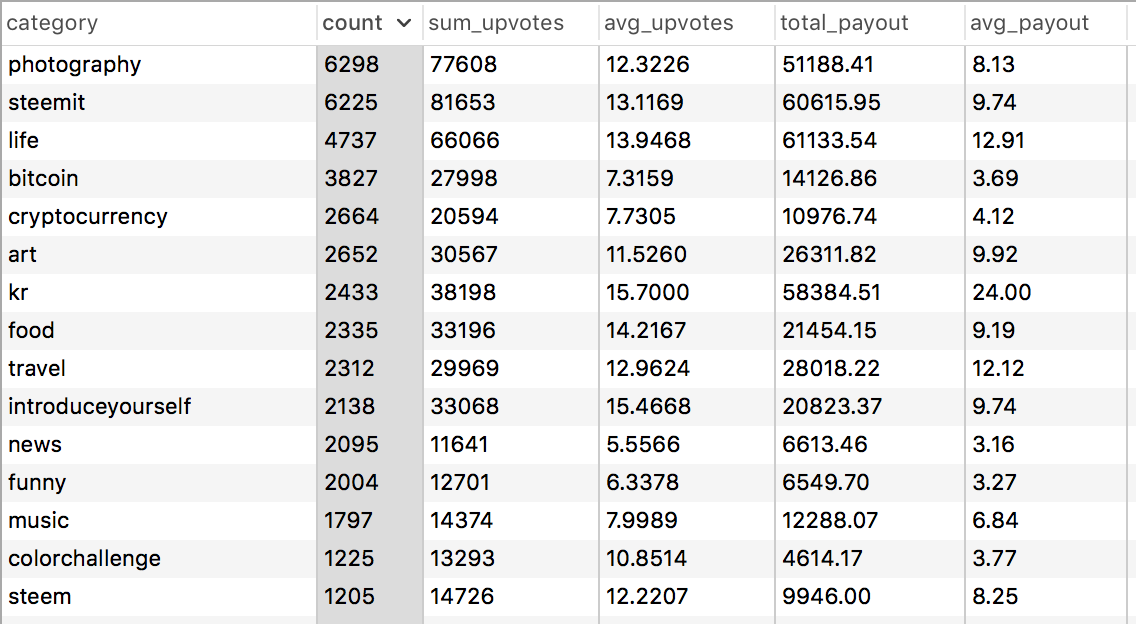 There were no surprises here through the top 6, but number 7 was unknown to me. Perhaps this is just because i've only been here a month, but I had no clue what "kr" meant until plugging that category into Steemit. For those that don't already know what "kr" means, take a look: https://steemit.com/trending/kr

This is the category tag used for Korean posts. I knew there was a large South Korean user base, but I didn't know there was a specific tag for it. I had always just assumed there was some natural filtering by language/location.

Also, nice to see introduceyourself doing so well. That means lots of new users. Although, as I pointed out yesterday in my post (Steemit Categories - The Weird, The Funny, and The Commonly Misspelled), there are a LOT of people either misspelling or using variations of 'introduceyourself', and therefore missing out on the benefit of showing up in that feed. So an auto-fill category selection might help some people out.

Congrats to @aggroed and the minnow support project! Huge success so far. Also, no surprise that writing about EOS is pretty lucrative right now. There's a lot of interest among Steemians. This is just sorting by upvotes, so these posts get a lot of action, but let's see where the money's really at ... 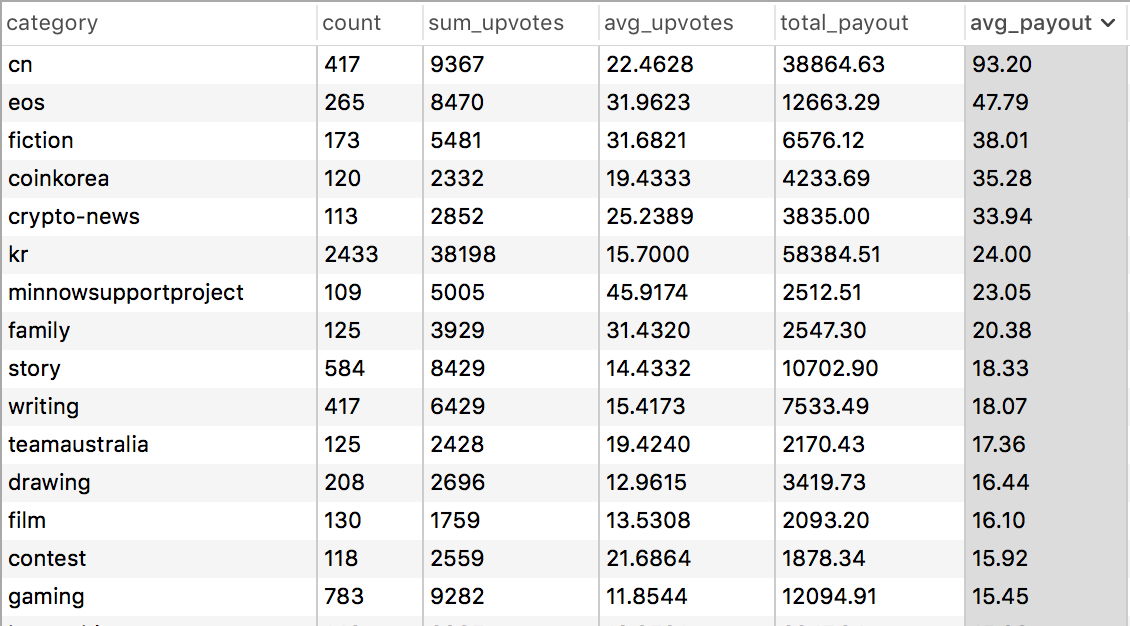 This was another surprise to me. Again, I had to look up this category to verify what it actually was, but my hunch was correct this time. Take a look: https://steemit.com/trending/cn. The #1 category in terms of average payout per post over the last 5 days was 'cn', which is the tag for Chinese posts. Interestingly, the average upvote count for posts in the 'cn' category was somewhat in line with other popular categories. The average payout, however, was two to three times greater! That implies that the average vote value is higher. Lots of Chinese whales? When looking at the trending posts in this category i see four posts making over $1,000 and i see some popular authors like @sweetsssj and @officialfuzzy. My takeaway: If you can find a way to hit your home audience and the Chinese or Korean audiences at the same time, there's a lot of money there. For instance, it appears @officialfuzzy is posting with the "cr" tag and doing pretty well with it (sorry to call you out lol, just following the data). Of course, people are only going to vote and interact with content that appeals to them. I am not advocating throwing random "cr" tags onto every post, but if your content plays well for that audience then go for it! For the sake of science, I'm also throwing a "cr" tag onto this post.

Now that we've gotten through the top performers, let's look at the less fortunate. My one takeaway here is that Steemit has not yet captured the jocks. "motorcycle", "sport", and "football" are in the list of worst performers. There were worse performers, but I can guarantee you that "football" would do a bit better on Facebook than Steemit. Even though I'm a huge sports fan, I can't say i'm surprised here. The prototypical Steemit user is tech-savvy and somewhat nerdy. Current and future waves of Steemians, however, will continue to be closer and closer to main-stream.

Ok, that's it for today! I'll have more data coming every day, so please follow if you're interested!

Thanks for the information! This is really helpful for newbies like me.

This is so amazing as I am already in steemit cryptocurrency food and life category.

This comment has received a 0.13 % upvote from @booster thanks to: @cryptokraze.

This data is very useful.

This is really awesome. It would be cool to maybe dive deeper into the data that is focused on anything Korean. There seems to be at least a couple of outliers tied to Korea, and I would like to understand what makes that data unique.

I'm hoping to put together a site that makes this, and much other data, publicly available. It's already available, but there's just too much of a technological barrier for the average user to go and find it

Interesting stats for sure. Most I my tags appear nowhere on these lists...maybe I'm comfortably in the middle haha

This ia great info thanks so much

good info, not just for personal use, but for purely educational interest as well. i was wondering if there was something on the site that aggregated this kind of data already in some way.

Well, what do you know. Education is not in the worst performing group. =)

Very interesting DATA Thanks for posting this

This post has been ranked within the top 25 most undervalued posts in the second half of Jun 28. We estimate that this post is undervalued by $61.85 as compared to a scenario in which every voter had an equal say.

See the full rankings and details in The Daily Tribune: Jun 28 - Part II. You can also read about some of our methodology, data analysis and technical details in our initial post.

Very informative and great reporting , thank you . Worth the read !

Great analysis @steem.engine, very informative. How do you go about sourcing this data? Is it readily available to query and interrogate?