Kucoin is a new Hong Kong based exchange that began operations on September 15, 2017. Originally launched as Kubi.com in China, the company moved their operations to Hong Kong, after regulators forced all Chinese-based exchanges to shut down. Kucoin has since shifted their attention to serve the international market. The platform uses KuCoin Shares (KCS) in a similar way to Binance. You get a discount on trading fees when you use KuCoin tokens.

Users who hold NEO on Kucoin will have GAS distributed to their accounts daily. A snapshot of NEO account balances is taken at 00:00 UTC +8, and GAS distribution occurs immediately, where most users will receive GAS before 1:00 UTC +8.

Overall, an interesting exchange with 0.1% trading fee compared to Bittrex is 0.25%. Also KuCoin aims to be a more user-friendly exchange than traditional exchanges available today.

Passive Income:
90% of trading fees is shared at 50% going to KCS holders and 40% shared with direct and indirect referral users. However, this percentage is subject to changes in the future, according to the Kucoin white paper.

Trading Discount:
KuCoin is offering discounted trading until October 27 to encourage users to sign up for the platform. You can get an 80% (compared to 50% on Binance) fee discount until October 27.

Mobile App:
Plans to release an Android and iOS mobile app in November.

Fast:
Claims that blockchain-based assets will be added to your account within 2 minutes of your transaction, with withdrawals completed in 10 minutes.

Quarterly Buybacks:
KuCoin will buy back KCS each quarter. It will buy back tokens using the 10% of profits collected from transaction fees. Buybacks will continue until 100 million KCS have been destroyed.

What is Kucoin in 30 seconds: 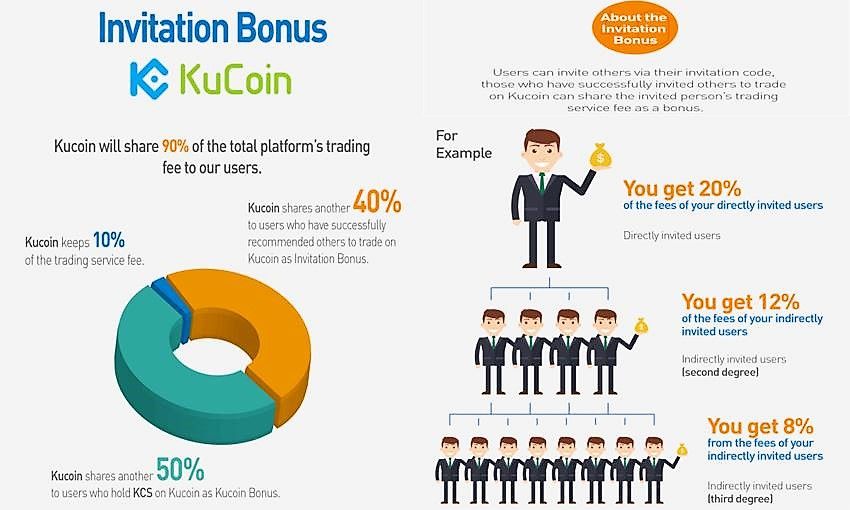 Sources of information about the project:
https://twitter.com/kucoincom - official Twitter
https://www.facebook.com/groups/KuCoin/

I’d really appreciate it if you could use my referral link:
https://www.kucoin.com/#/signup?r=E3alDU

Remember by just clicking the upvote button you will be giving an amazing support and do not hesitate to resteem to share it with your Steemit brothers and sisters! Thank you and happy trading, wish you massive profit! :)

An exchange that gives free gas when you hold NEO?

yes it is the first one that gives you neo gas daily.

You have collected your daily Power Up! This post received an upvote worth of 0.17$.
Learn how to Power Up Smart here!

This post has received a 3.13 % upvote from @drotto thanks to: @palani.

This post has been ranked within the top 50 most undervalued posts in the first half of Oct 25. We estimate that this post is undervalued by $15.27 as compared to a scenario in which every voter had an equal say.

See the full rankings and details in The Daily Tribune: Oct 25 - Part I. You can also read about some of our methodology, data analysis and technical details in our initial post.

much appreciated, keep up the good work!

I think I will move all my coins over to them gradually, they are much better than many other exchanges, even binance too.

trading is life for some people :)

Showing back the LOVE

added to your account within 2 minutes of your transaction, with withdrawals completed in 10 minutes...24/7 Customer Service

Thanks for this alternative! I know there are other workarounds for buying STEEM; and, after today's 'glitch' will definitely use as consideration for the next buy; especially, because of the lower fees.

I will bookmark this link, and further research KuCoin. I'm encouraged by all of the support this post has received.

thanks for that information, I will see if we can work with it, upvoted!

This post received a 1% upvote from @morwhale team thanks to @palani! For more information, click here! , TeamMorocco! .
STEEM Price : 3.244 $

You were lucky! Your post was selected for an upvote!
Read about the bot Thanks for that information. I will deeply research this coin.

dont forgett to use my referral link:)
https://www.kucoin.com/#/signup?r=E3alDU

@minnowpondblue has voted on behalf of @minnowpond.
If you would like to recieve upvotes from minnowponds team on all your posts, simply FOLLOW @minnowpond. The @OriginalWorks bot has determined this post by @palani to be original material and upvoted(2%) it!

I also got free altcoin as passive income daily from Kucoin. Cool!

I really like those who are working there, they do a great job and i think Kucoin have a great future. So Im really glad that I invested in Kucoin 2 months ago.

I really like Kucoin. It has a lot more coins than Binance. For example, XRB, ACT, KCS. Feel free to use my link: https://www.kucoin.com/#/?r=7PRdMh We will both get bonus.